It is no longer quite young, in 1800 Honda GoldWing, and yet … Behind his tunes venerable road, this beautiful and great Japanese motorcycle is broken down in this version Honda F6B look at magazines and ambitions for 2013. Its purpose attract young and revitalize the image of upscale Honda exploiting a new way the custom touring or bagger in biker lingo. 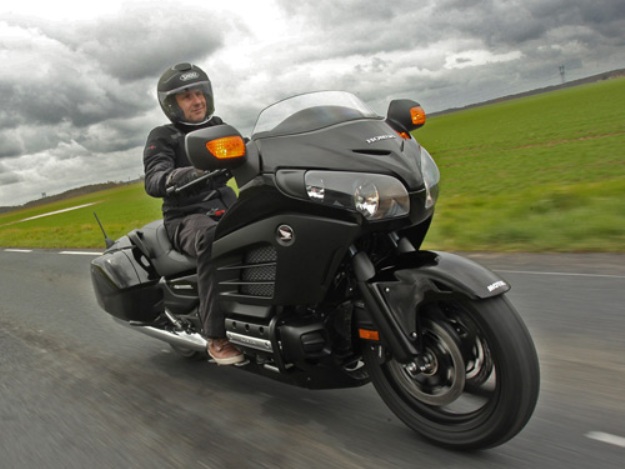 Which bike best embodies the Grand Touring Japanese? No other course. Since if it celebrates this year its 38 years to the catalog, the Honda Gold Wing remains the exception of the kind, often copied, never equaled. Because passing from 4 to 6 cylinders in the 1980s, the flagship of the Honda fleet once again reinforced a general accreditation which today still makes references among the great… easy riders.

In 29390 € (on 10/04/13) the ticket of entrance, the device is not frankly given and saves itself in most cases to installed customers, as they say, close to 50 years, or even exceeding them. Anything abnormal finally in this official report, even if in parallel, to ‘make younger ‘ the customers became a first objective for numerous constructors on the European market. And it is in this logic that registers precisely the evolution 2013 of venerable Gold Wing. By adopting one B in the appellation, the first bagger Honda imported officially in France gets along entice younger bikers and make more dynamic so the picture of the great lady. Here is how. 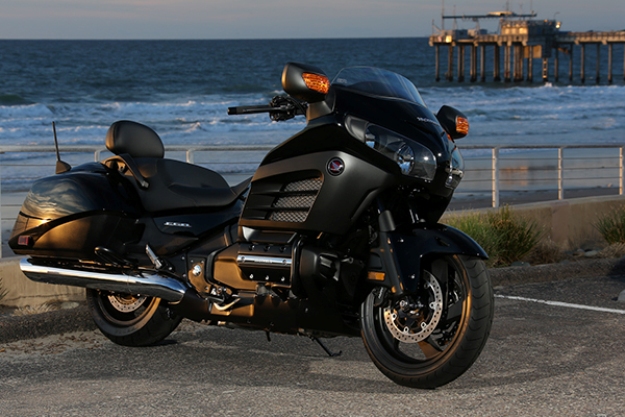 Undoubtedly, the Honda F6B GoldWing is already a hangover. Finished the ‘caravan on two wheels’ well known, ablation of the generous top box (trunk) performed miracles on the ‘new gold’. With its black color, its private its bead seat, short Bull and especially this backlog significantly more air, and fleeing the bike leaves no one indifferent, regardless of the angle of view… Like the Electra Glide lightened by their owners not willing to break the back of diehard customs, the Honda F6B reconciled with a real success both extremes, and custom GT in a very Japanese style. The finish is excellent, and especially changes made imperceptible to discover that the beast without knowing its history.

Consent-even of Honda France, current Gold Wing (left in 2012) was already thought for this evolution – in particular its bags, preserved here at the identical one – to finally limit the transformations and thus their cost. GL 1800, the Honda F6B thus preserves the mechanical base and the frame, as well as the large one of the preparing. Custom, it takes again the aspects ‘roots’, by removing the Honda high-end from equipment considered to be here useless: reverse running and speed regulator, saddles heating, back adjustment of shock absorber to the instrument panel, and various electronic desires to look elegant. Nothing complicated finally, but which does not transcend less the esthetics of the GL 1800 and appreciably improves its assessment of it on the balance: – 28 kg! 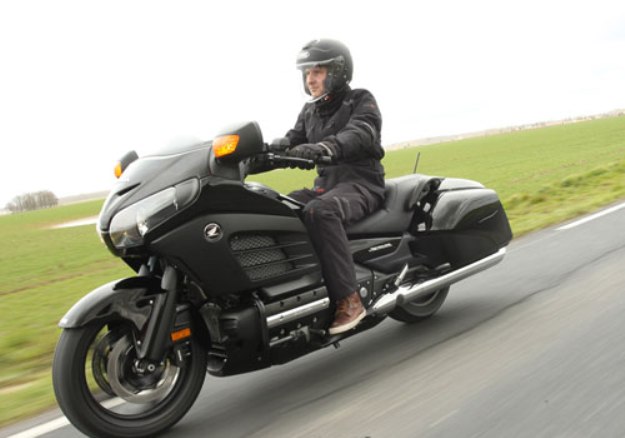 Therefore, the catch in hands of Honda F6B GoldWing has nothing insignificant… Besides his size, its wheelbase (169 cm between both axles of wheels, that is 20 cm of more for instance than on Honda CB 1100), its weight (there remains another 384 kg any full facts), it is also its mechanics which impresses dices first one singing exercises… Except for the news BMW K 1600 GTL, no other motorcycle currently dares to propose 6-cylinders in series.

The Gold Wing engine is very particular: with its piston flat (horizontal) against three by three in the direction of the road (Boxer type), it is reported very low in the framework and greatly facilitates the pilot age of the gear. Intimidating in appearance, it is true a little physical to raise the lever to position it vertically to the judgment, simply yet engage gently accelerating just to launch the Honda F6B GoldWing, and therefore, taste and incomparable sensations and for all say… very, very nice.

Whether to retain two dynamic attributes to the first custom touring Honda, stability and smoothness would point at the forefront. From the first laps, Honda F6B indeed provides a feeling of absolute confidence, weight and length at any time smoothing behavior. She does not move in a straight line and around corners, absorbs bumps like a routine formality, majestically winding turns while providing amazing ground clearance. Certainly, they do not extemporize on Honda F6B: they anticipate while knowing that the animation of direction will always be able to, at instant or other one, help ABS in case of the unexpected very as coupled stopping.

But especially, what a motor! From 750 to 5 500 rpm, it is a death rattle first, the growling of the gables of transmission, then the box with air takes the intermediary and it is then a mechanical symphony which accompanies the slightest action on the handle every other minute. Increase is not violent but linear, supported and available every other minute, the motor does not bash regime in (very) low, does not sit down in resumption, and continues growing even though the attained speed is already very far from what they expect from her in a ‘normal ‘ use… 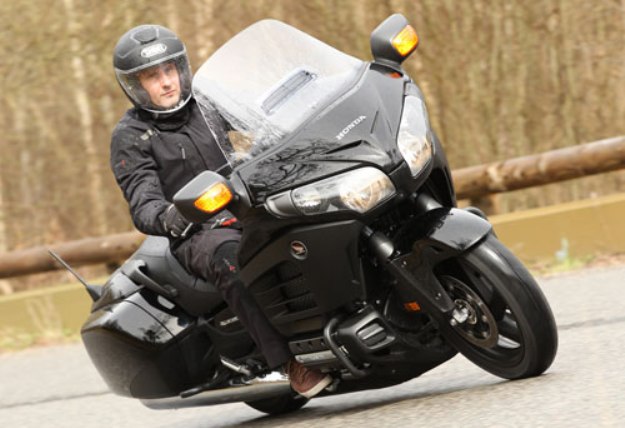 This F6B has high bubble optional, effective against turbulence but less for the look…

Thus, quid of the modifications made to worthy Gold Wing in this version bad servant boy?

Purified, stripped of its bead and allowing to move more on board, it is also 15 mm lower and therefore treats all small templates which do not (too) feel overwhelmed by the volume of the equipment… However, despite appearances, it is far here from the usual ergonomics of the customs, feet forward and undergoing the less acceleration. According to the constructor, footrests and handlebar of Honda F6B would have been moved of some millimeters. It is almost insensible in actual fact to behavior, the machine always giving this position typical of road – back definitely right, normally folded up legs – and it is true, more efficient to run every day and/or for a long time.

Boasting views of the road almost dramatically with an undeniable psychological effect to the conduct, it justifies its amendment before even the first laps of wheel. However, its effectiveness is unimaginable considering its almost barbaric shortening… Compared with the optional high windshield mounted on one of Honda F6B this presentation, the standard wind deflector generates more turbulence on the shoulders and mid-height of the helmet, but does not cross at least good speed without suffering from the pressure of the wind (not more than the upper bubble). However, the audio system becomes almost inaudible past 90 km / h because of wind noise much present, especially the rear speakers, previously housed in the armrests top box, so have disappeared. The rest of the fairing protects very well the chest, legs and feet, especially in the rain. 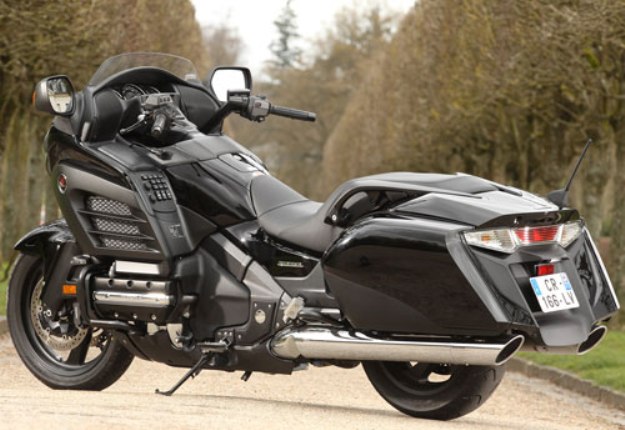 Twenty-eight kilos in less match a total weight with full reduced by only 7%… Suffice to say that it transcends not the behavior of the Honda F6B, whose template requires a cockpit sunk and secure, as well at high speed in the slightest maneuver to stop or very low speed during a u-turn for example. Removal of reverse is not a gift, and is better to remember before Park… On the other hand, the disappearance of the top case is a blessing for the look of course, but also for road holding in windy side for example, and on solo cruise consumption (to be measured in the Maxitest) probably. The suitcases that can each accommodate a full-face helmet allow better to do without.

Deprived of his generous file, the passenger is obviously less well-received on the Honda F6B GoldWing as the side handles do not allow to easily continue accelerating. The sissy-bar option here must therefore for the duo, as the shape of the saddle and its placed footrests wisely then allow considering long steps in very good comfort.

It is unfortunate that the adjustment of the rear shock, become manual application now to remove the right side cover to access … Control on the dashboard was much more convenient, especially for solo use / intermittent duo. GPS and airbag also disappear in the operation, as well as the cruise control on the highway nevertheless very useful. 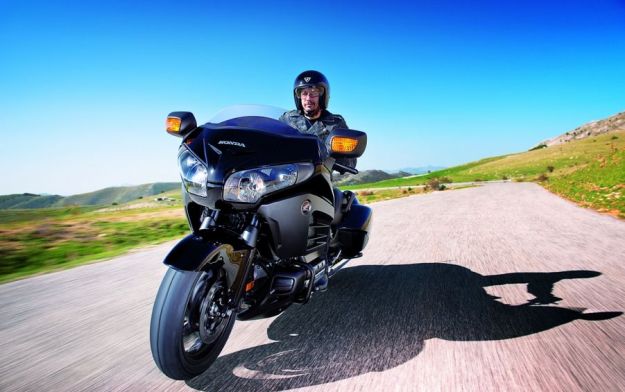 Assessment test F6B: Custom touring which in announcement of others…

How not to fall under the charm from this top-of-the-range bagger? Because even if it deprives its future and lucky owner of equipment very appreciated hitherto on Gold Wing standard (regulating, adjustment brought back shock absorber and reverse running especially), Honda F6B 2013 does not propose of it less one single level of services on the market, a character always also attaching and from now on a look much more in keeping with the new trends. Provided, it is no less sublime in all the know-how of the brand in a new category for it, and thus a technological standard which will meet perhaps more regulars of Japanese motorcycles, hesitant to switch to American competition. Displayed at € 23,990 (at 02/06/13), so F6B offers an entrance in the upscale Honda more affordable than offers standard Gold Wing GL 1800, the first price is set at 29 ticket € 590 (€ 32 590 with GPS and airbag).