The new KTM 1290 Super Duke R looks like the major Austrian manufacturer for 2014 novelty. With 1,301 CC, 180 horses and 14.4 daN.m of torque in free version for 189 kg dry, this roadster King-size approximates ‘dangerously’ characteristics of a hyper sportive. Here is the KTM 1290 Super Duke R version full power test on road and circuit. 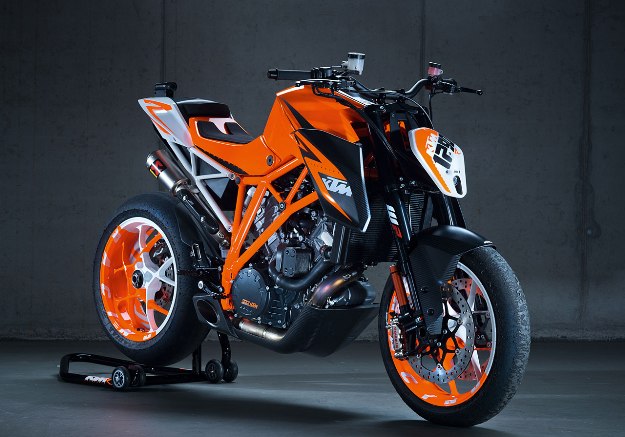 Jeremy McWilliams, former Grand Prix driver and today driver development for KTM, opens the road departing from the hotel. All disengaged audience, he takes off no unceremoniously to the still cold rear tire, which smoke drift up to find grip. Now, it happens like that in KTM!

Ready to Race is the slogan of the Austrian brand and it is true that there is what being packaged by the KTM 1290 Super Duke R after these two days and more than 500 kilometers of test on road and circuit. It does not less reason keep when analyzing the bike. That falls well: in bikesdoctor.com, it is known to keep a cool head! 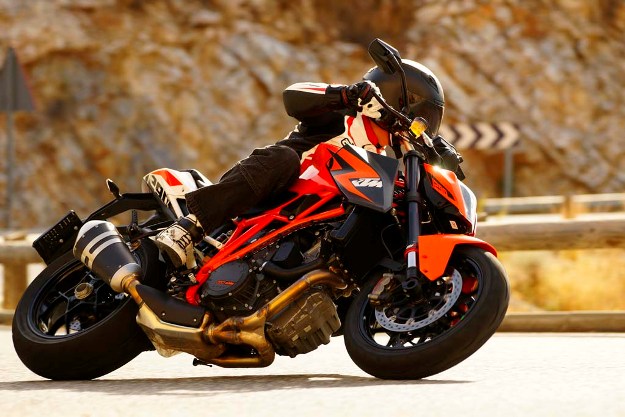 Always orange, but any new

At the end of the press conference, the Pack of journalists handpicked spreads: Exchange with the technicians, inspection of motorcycles, there is something to do. The KTM 1290 Super Duke R is not an evolution: it is a sports roadster, it is orange, but absolutely everything on this bike is new.

Starting with the twin cylinder opened to 75 °, one of the architectures of predilection of KTM. This engine incorporates the technology used on the RC8R but pushed the real capacity up to 1 300.8 cm3. Potential level, it looks for less: 180 horses and 14.4 da.Nm of torque in free version for 189 kg dry. Gee, you better be well rested before taking the handlebar.

On the side of ergonomics, KTM1290 Super Duke R shows frankly natural, with very little support for the wrists and a not too wide handlebar, unlike a Honda CB1000R for example. Culminating than 835 mm, the saddle is relatively high perched and drivers of less than one meter seventy-five will not put the feet on both sides. The bike remains still very close, but not as much as the KTM 990 Super Duke. 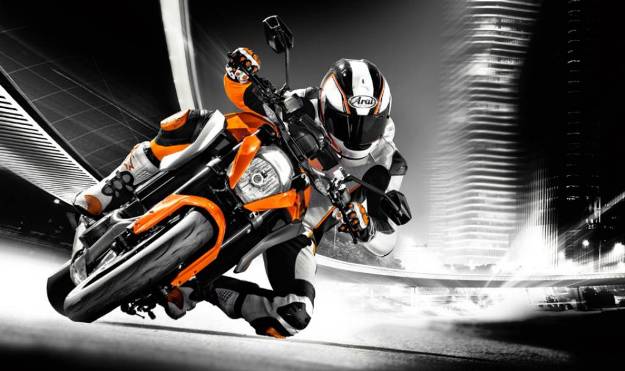 The first kilometers allow to get acquainted with the Beast as call it house technicians, but the trust moved quickly. Already, the General lightness help in slow developments, like the ultra soft clutch control or the accelerator in long draw which avoids surprises if we screwed a little too handle. At this time of the test, it said that it could apply to other wider audiences that imagined at the outset.

The instant comes then to open in big on original returns. Taking into account the characteristics of the apparatus, and knowing the strong character of the Austrian motorcycles, is expected to send the front wheel to the heavens before even reaching high revs. Surprise, it is nothing! In fashion Street, the electronic audiences ensure grain, and the front wheel takes off a few centimeters before returning to the ground… on the three first reports.

Performances, undoubtedly very high, are similarly under supervision of on-board electronics. Past this surprise, more finely analyzed the behavior of this new engine, which distributes his horses and its meters kilos as Kalashnikov cartridges. 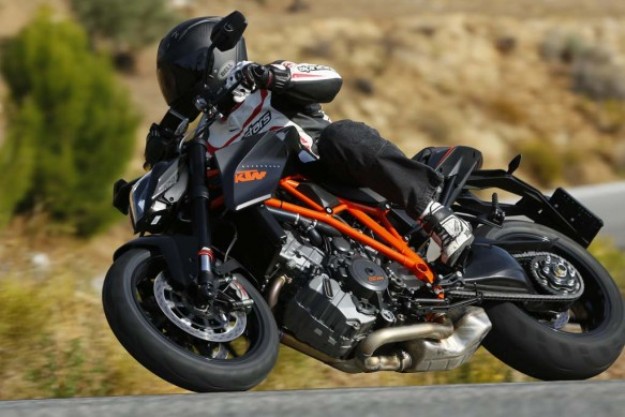 A XXL couple at mid-range

Enough round for a block KTM LC8 1290 develops a generous ultra torque between 4000 and 7000 rpm. A bit like the Moto Morini block also. Devoid of brutality, even in Sport mode, it offers within this range of system of the times Romanesques, and despite a lengthy final transmission slightly penalizing the liveliness. Not much serious given the health of the engine. It is almost impossible to put the sixth on roads limited to 90 km/h: to engage this last report, it is necessary to approach the 110 km/h.

However, drop below 3000 RPM in sixth is a delicate exercise; both the twin shows his disapproval to large piston strokes, so Aprilia Dorsoduro 1200. This game, the KTM 1190 Adventure shows significantly more flexible and less vibrant. Certainly, the specification is different, but still…

Once this assimilated character trait, it is in arranged, all that shorten the final transmission will no doubt increase the motor brake which, as such, seems perfect. Thanks to some ascendance’s and other portions straight, there is the formidable extension of this twin in free version. What health over 7000 rpm! Better to cling to the handlebar and open their eyes because curves jump you in the face. On the mountain road that climbs to round, it is almost impossible to screw the handle in Street or Sport mode.

It is much more feasible in Rain mode, limited to 100 horses. Moreover, this mode ‘wise’ gives a good idea of ​​what will be the KTM 1290 Super Duke R French a powerful and full enough mid-range roadster, but nothing more. Once again the law of horseless condemns us to drive a half-moto… 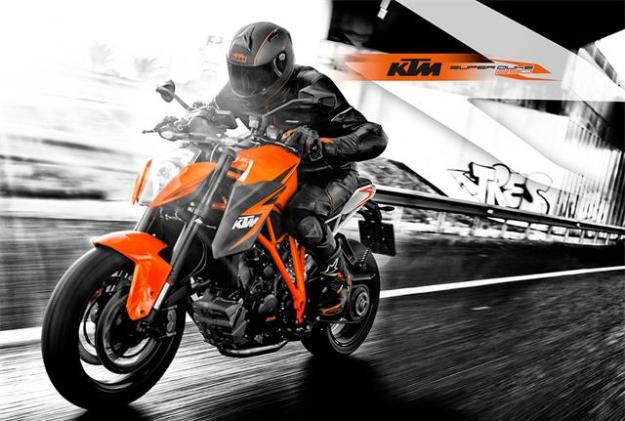 WP, it takes the floor

During our test, we were treated to two different suspension settings for a standard setting for the road and a firmer setting for the circuit … knowing that we went on the tour by road. This second adjustment involved the hydraulic suspensions, slightly closed for the occasion.

In standard setting, the KTM 1290 Super Duke R freed very well irregularities of the coating. WP suspensions are known for their efficiency and the control surface travels generous (125 mm AV, 156 mm AR) spoil nothing table. It is a pleasure to deal with a bleeding on the corner without cutting, because the bike absorbs the fix without flinching.

Damper direction of course must attend the excellent stability on the corner as online, but the geometry of the Super Duke R (less radical than the 990) there is probably not foreign. And then there’s also the ergonomics which limit the support on the front at a reasonable level. In fact, the tensions on the handlebars don’t cause too much disturbance to the chassis. 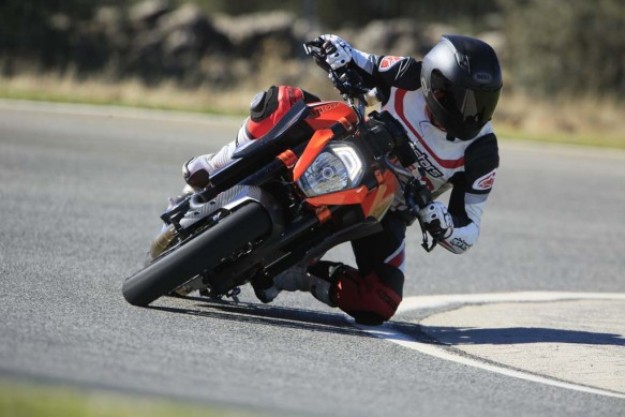 A roadster built for the track

Setting track, surprisingly, KTM 1290 Super Duke R is not transformed into a piece of wood. What is a great surprise? Shocks seem certainly more dry, but the bike still very livable, if not comfortable, more agile thanks to better braking suspensions. In addressing the stunning cavities circuit under a drizzle early, we realize immediately that the new roadster KTM feels like a fish in water.

The engine is expressed at full throttle and the meter needle climbs at breakneck speed. Past 7000 rpm, the accelerations are breathtaking and the breath of the engine remains impressive, even in reminders after breaks to more than 200 km/h!

The rigor of the part-cycle is present and the large 48 mm WP inverted fork cash braking tomb permission by calipers Brembo M50, the top of the top in this field. New Dunlop Sport Smart 2 do they work brilliantly.

In addition, electronic audiences as Racing ABS or traction control always respond present to a dosage error. McWilliams unplugged everything to slide from the rear until the buzzer, but it is McWilliams… 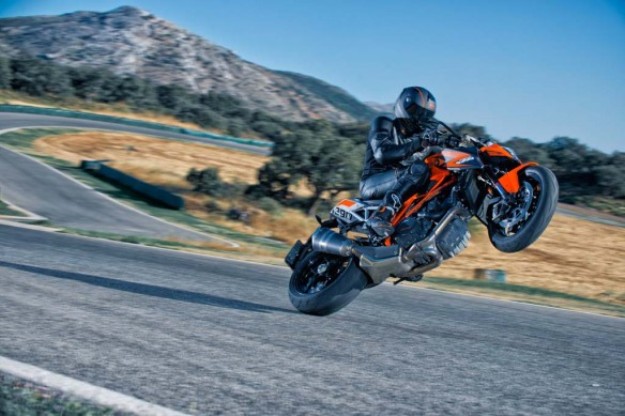 Balance sheet: A superbike without a fairing

In a day and a half of testing, the KTM 1290 Super Duke R has demonstrated all its potential. On road as circuit, it shines by its general performance, surprised by his always generous motor trunk and proves almost humanly affordable thanks to controlled electronic helpers. Certainly, on one such motorcycle, the concentration remains, but the Super Duke R proves to be even easier than a hyper sportive for daily or tortuous and poorly paved roads.

Maybe we could find other roadsters more accurate part-cycle as the Ducati Monster 1100 Evo, may be that an Aprilia RSV4 APRC offers more sensations motor… but the new KTM 1290 Super Duke R looks formidable in more than one way. 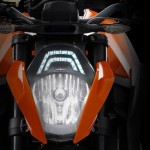 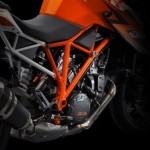 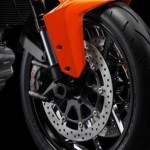 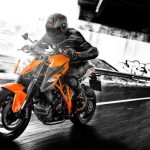 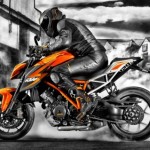 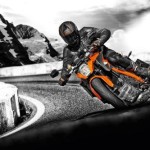 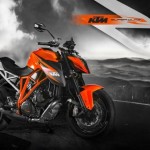