The Ducati 899 Panigale replaces Catalog 2014 848 Evo. On the menu of this new larger engines, more power, more technology … And the menu of our test sessions on the Imola circuit in Italy, between showers. It left for a complete circuit test! 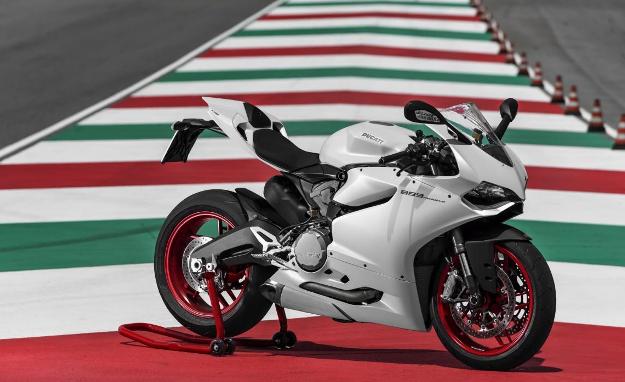 Ducati does not waste time less than two years will only manufacturer in Bologna transpose the technology of its Ducati 1199 Panigale super bike at a sister called Ducati 899 Panigale.

The fruit of this work is there, before our eyes, on the circuit of Imola. The Ducati 899 Panigale is aligned in the box and the mechanics work to prepare. It is time to change, because the Italian atmosphere is filled with a drizzle everything more Normandy… and I know what I am talking about!

Once the racing rain tires mounted, we can prepare to take the track. Luckily, I had already rolled on the Italian track at the press presentation of the Ducati 1198 S and 848 Evo. Although conditions differ at the beginning of the day, the comparison looks interesting nonetheless. 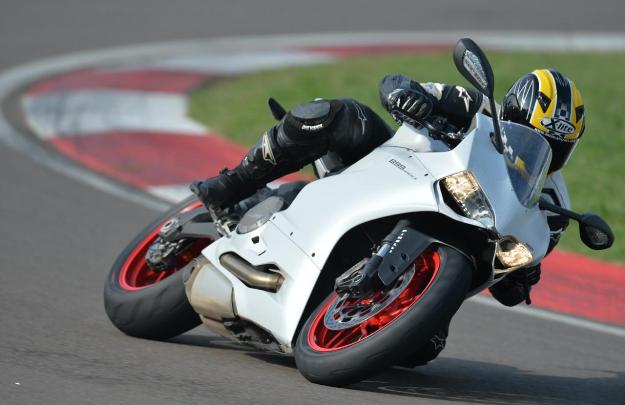 In the saddle, we discover a Ducati 899 Panigale as high as most of the current sports (830 mm), but the saddle is narrow and the bike seems short (2,075 mm long for 1426 mm of wheelbase). Ergonomics is more radical in terms of support of the wrists of the withdrawal of the legs.

In addition, the shape of the saddle, flatter than on the 848 Evo, allows more latitude is back on board. In the end, this new Ducati 899 Panigale will be not more radical position than the 848 Evo to ride on the road and the one meter seventy more will affect the ground on two sides. 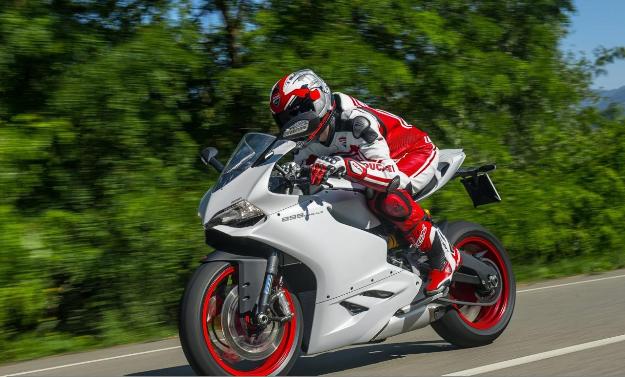 Do not dream anyway, we are on board a Super bike made in Bologna: turning way RADIUS door plane, effect of toggle on the top of the body necessary to apprehend the beautiful. While I hold in the queue to access the track, let rise in temperature the new 898 CC twin.

It is quieter than the big Superquadro of the 1199, it vibrates less also and it seems less brand in terms of plunger stroke. What is more normal after all, since the cube 300 cm3 of less? 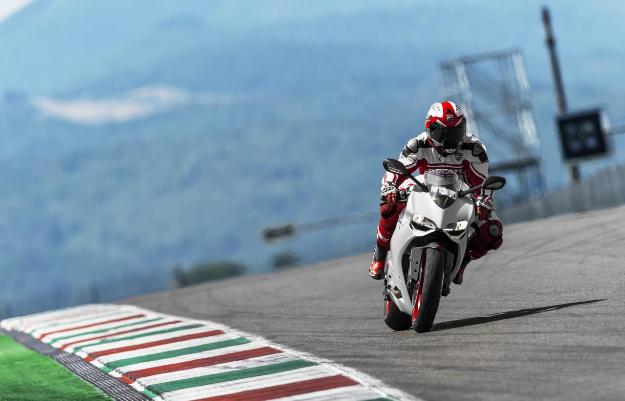 Thank you wet-weather tires, the DTC and ABS!

The route of Imola is demanding: it develops nearly 5 kilometers, includes slow chicanes with strong raises, the difference that causes small channels of water when it rains there not real straight, and the straight portions being equipped with break. In short, it never rests.

The Ducati 899 Panigale soft commands help recovers the head circuit. Lightness is delivered and placed without any effort to wound rhythm. With 193 kilos all full facts announced, Panigale small figure in the average bass of the category, but the Triumph Daytona 675, for example, gives a greater impression of lightness. 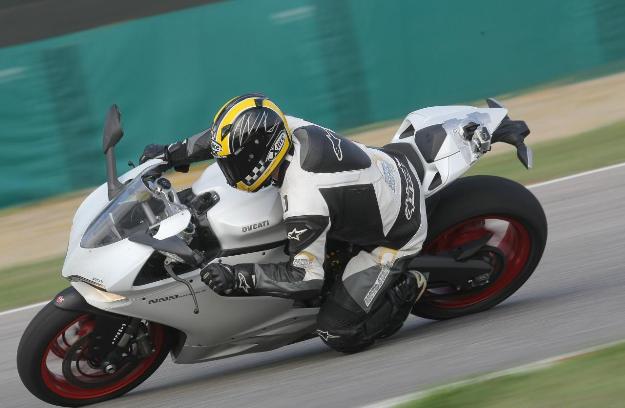 Wet-weather tires reassure immediately, all as valuable AIDS to the cockpit. No miracle, however: If you no matter how fly, the 899 belle will be flat. But after two rounds, it’s already fun to speed up big passing reports without touching the clutch with the shifter mounted in series. The latter is superbly calibrated and ignition cuts are practically insensitive.

The selection is accurate, and thanks to Ducati Traction Control, negotiating grand gas breaks through the puddles without movement of the rear axle: stunning and effective! At the end of the descent of the so-called curve variant, it slows down without too much management: the power of the Brembo calipers is consistent and the ABS releases the pressure time and time. 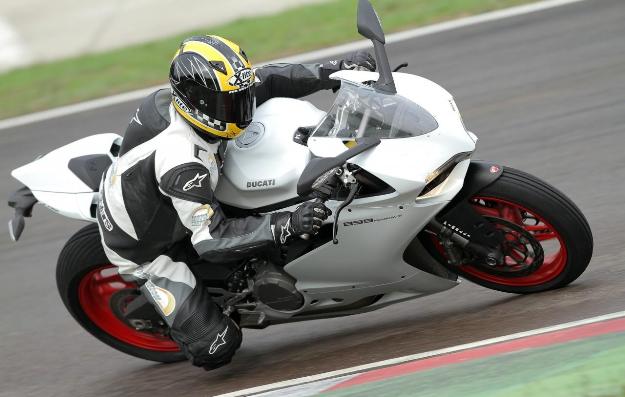 Another fact marking, and tended to favor the Ducati Panigale 899: his side more restful than the 1199 of the same name. Obviously, there are fewer horses in free version (148 advertised for the 899 against 195 for the 1199), resulting in even fewer constraints to the chassis or tires. Suddenly, we almost forget the nervous cycle part of the ‘grandee’ Panigale.

Similarly, if the hollow engine and explosive 1199 imposes a manual on circuit (care of the recovery and some rest in straight lines), Ducati 899 Panigale chews work. Quick to get up to speed, with a good length, but devoid of brutality, it offers a high performance potential, but humanly shows more affordable.

The part-cycle does not disappoint, quite to the contrary. Stable online, it remains very maneuverable at high speed, a real strong point for this bike. Braking is regal, although the feeling is still inferior to that of the 1199 and 1198 S other. On the corner is excellent and Ducati 899 Panigale joined the rope easily. There, she seems much more agile than the 848Evo. No doubt the new mounted is Pirelli in 180/60 aid maneuvering.

In the long curves, the feeling of stability is beyond criticism, but includes above all the opportunity to tighten the rope which seems to be one of its strong points. And then, the curve output is much simpler than a 200-horsepower Monster riding… 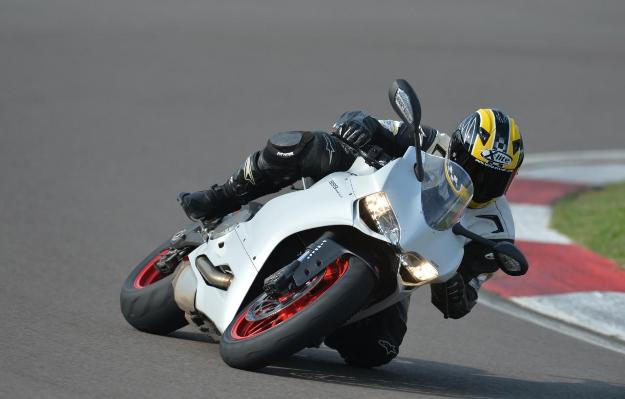 Balance Sheet: An alternative to the 1000 Japanese

On circuit, there is no picture, the Ducati 899 Panigale demonstrated excellent potential: adequate engine, part cycle sharpened, audience controlled… Over the towers, in some phases delicate (re-acceleration on the corner, braking on wet floor, passage of fast speed thanks to the shifter), 899 Panigale chews you work. A bit less efficient than the 1199, it is especially much more easy.

Sold 15,790 euros, it is placed in potential competitor of super bikes Japanese or of the MV Agusta F3 800. It is also 3,400 euros cheaper than the Ducati 1199 Panigale exit (19,190 euros) for a technology close, suspensions electronic updates to share. 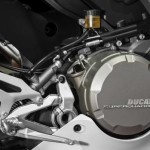 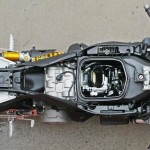 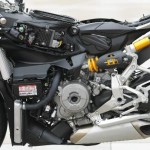 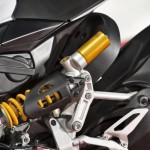 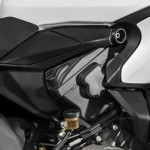 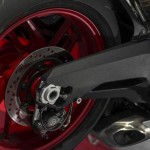 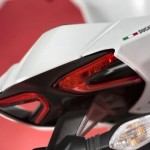 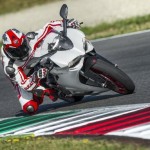 I Hope you enjoy reading Ducati next super bike. Ducati made this special motorcycle for super sport maxi. You will see and enjoy this bike speed in race tracks of 2014.