Team Movistar MotoGP Yamaha launched its 2016 season in Barcelona, where Jorge Lorenzo, the reigning champion of the world, and his teammate Valentino Rossi unveiled the new design the YZR-M1 take place this year. After winning the world driver championship titles, team and manufacturer by 2015 but with experience of a few moments of tension between the two pilots, the team Movistar MotoGP Yamaha will not experience significant change this year, as explained by the general director of Yamaha Motor Racing Lin Jarvis: ” One of our strengths is the fact that the team is working very well in general, drivers are individual runners, but the team of mechanics and engineers is a collective that works well. it will be a good thing, since Yamaha will do so soon. That is our main goal: beating our opponents.

The team and the drivers will now end their participation on glady snow for next step: Now before going in the qatari desert against a stifling heat, the Yamaha M1 in 2016 of Valentino Rossi and Jorge Lorenzo made a detour by the massif of Mont Blanc if, all as only large…. Offer us a shoot on the roof of Europe with these photos taken by Getty Images at pointe Helbronner, 3466 metres. Not what bully Massimo Meregalli, Director of team Yamaha Movistar, who braved the 20 ° to join the pair of M1… 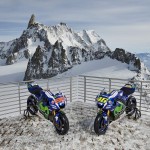 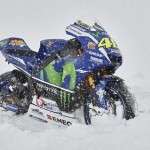 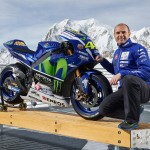 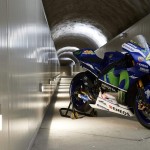