If until now this idea has not been written with ink, it may be that this is a very next attraction in the world of two wheels. A picture stolen by Italian photographers Site InSella. It shows us what might be the future gross in MV Agusta. At this stage of development, we can even assume that the bike here presented is close to the final model. Trans alpine photographers have managed to capture this image of beautiful Varese which could well be a Brutale 675 or 800. No other picture for this model had transpired so far.

Although hidden by the traditional colors of developing models, perfectly recognizes lines Brutale. The single-sided, three flutes own distinctive to MV three cylinder, the tubular frame and even the lighthouse – although taped – is recognizable. In addition, the plate support in the low position reminiscent mounted on the drag racing model.

Unless the camouflaged areas will be a preamble to new parts, which would be much more eloquent. Anyway, you can see two jars on the handlebars, which suggests that the clutch so far mechanics, hydraulics become.

Unfortunately, this picture tells us nothing in terms of mechanics. However, we know that the Italian factory is also preparing a new 1000cc engine even more powerful than the current one. We let ourselves imagine a “crossover” between the model on the photo and a high-performance engine…

Strongly the EICMA show in Milan that will be the answers of this coming cruise!

The current 4-cylinder block will 2016Voilà facelift in recent years that MV Agusta is focused on developing its range of three-cylinder initiated with the Brutale 675 and 800. A few years everyone expects the new side of the other drive flagship of the range: the 4-cylinder 1000 cm3. It would seem that 2015 is a year of renewal.

To celebrate the grand gathering of the brand in honor of Claudio Castiglioni few days ago, Gli Amici di Claudio, the president of the brand Giovanni Castiglioni confirmed the preparation of a new range of 1,000 cm3 2016. We can legitimately expect a presentation for this year’s EICMA Show in Milan.

The Italian site Omnimoto also reports that this range would consist of three new models: a sporty, a naked roadster and a crossover. It does not take much imagination to predict which models will be presented. First, it is the F4 1000 that should do more about her while the roadster should in all logic take the actual design of the Brutale.

However, one wonders what will present the brand as Crossover. If road trails are obviously in the viewfinder, S1000XR BMW and Ducati Multistrada 1200 in mind, it may be that the manufacturer develops a new platform. The most plausible hypothesis remains the launch of a Turismo Veloce of 1,000 cm3. 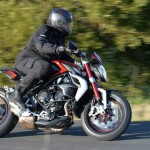 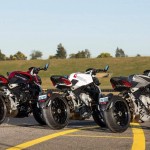