Who follow politics know Kymco lance since a model is announced until it reaches the Spain spend several months, sometimes more than a year. In the case of Kymco Dink of Super 125, DownTown worldwide, which was shown at the EICMA in 2015 after having made his version of 350i in the same room 2014. Finally come to Spain in the first quarter of 2017 at a high enough price, 4,299 euros. KYMCO Dink great full 125. Regarding the design represented in the 2014 edition there is no change, except for the introduction of the Deep Blue color, you can see on the pictures. The previous generation has a shield, more large mirrors 10 cm longer, new instrumentation, with a more flexible revised seat fabric…

He did wait more than a year in Europe at least something positive, because it will come with Homologation Euro 4 in its engine 14.3 hp single cylinder at 9000 rpm and 11 Nm of torque at 7000 RPM. 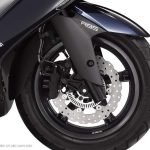 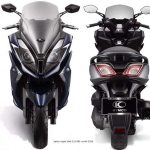 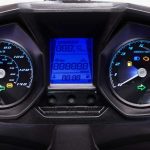 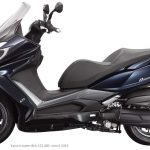 The other important contribution is that it comes with the brakes ABS Bosch Option 9, 1 M, lighter, compact and economic. Without knowing the technical data for the Spanish version, will continue with its successful formula. So, you can expect a contemporary design, generous seat for the car and under the same space for two full face helmets.

KYMCO is obvious that every time less is a low cost option for users at the expense of the highest levels of quality. Bad at all do not, because in Spain it is already challenging the leader in Honda sales and is the best selling brand of scooters.