The info comes from the big boss of the Austrian firm, Stefan Pierer, who spoke to our
colleagues Speedweek.com. KTM will swell the ranks of MotoGP in 2017 with a new sport with a V4 and available for sale to private teams. Detail: Racing Speedweek.com publication reported that, in an exclusive interview with KTM boss Stefan Pierer, he said that the company plans an entry MotoGP  2017. At that time, the electronic specifications are in place, and Michelin have had his first year back in the championship.

Despite the philosophy twin cylinder KTM Pierer said the project would be a 1000cc V4 engine, using a steel trellis frame and its internal WP suspension. In terms of timing, the manufacturer aims to have the first engine test in May 2015 with models of “production” of the motorcycle ready for fall. It would aim to keep the same philosophy as currently racing in Moto3 ™, choosing not to run a full factory team, but instead offer it as a bike to customers. Pierer was also quoted as saying that they will be looking for a solid test driver for 2016.

Suzuki, Aprilia and KTM now. If all their promise, MotoGP will soon find a rack worthy of the strong name of six manufacturers officially engaged. And the youngest to have announced his arrival in the premier class is probably not the one to take more lightly since it is the president himself who unveiled his plans for 2017.

After briefly been present in MotoGP in 2005 as an engine, the orange brand commit this time to a RC16 V4 engine to be developed to the bench in 2015, on tour in 2016 before being officially launched in 2017. A package that will available for about 1 million euros for the teams that would like RCV1000R. The framework will be of tubular steel and suspensions will, of course, WP owned by KTM.

Note that a version of “public” this machine should also be produced in small series (one hundred copies) for wealthy wishing to impose a maximum on the racetrack. 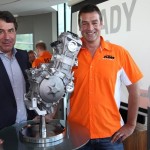 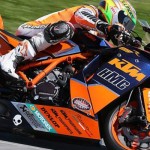 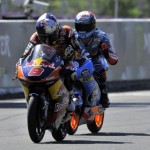