Following our tour cross tests and now up to the Kawasaki KX450F 2016 on real novelty to be reckoned with! We completed the testing of the largest of the KXF MXGP circuit Maggiora, where she impressed us on many points, they tell you everything… Kawasaki this year, the flat calm regarding the small KXF 250. However, green are arranged to the side of the 450 KXF 2016: revised engine, new injection, chassis and draconian regime profoundly changed … In short, the fact (3.4 kilograms less are announced!) takes no less to fuel our desire to ride aboard the new KX450F, especially as our day the playground is none other than the gorgeous Italian circuit Maggiora, no less!
Finishes at the top
Nothing resembles a KXF a KXF … So when you look at the new Kawasaki 450, we do not make necessarily account of the changes. I can already hear aficionados of the green mark cry foul when reading me. But they can rest assured, we also disposions a KXF 2015 on site, and placing it next to his successor, while then became obvious! Its plastics are “sharpened” the 2016 model becomes more aggressive and modernizing … Yet when auscultates a Japanese motorcycle cross, it is rare to be subdued … But Kawasaki exception to the rule, the KX450F is clearly ahead as the most racing machines of the archipelago. Besides the many pieces anodized black or green, black DLC treated tubes and almost matte white fork blades confer a true spirit to the KXF Factory. Not to waste anything, we can only welcome the weld quality of aluminum frame, sharp, burr! You’ll understand it we already won the 450 KXF 2016, but it is primarily on the ground that it will have to convince us!

From the start, the Kawasaki shows welcoming, it fits perfectly behind the handlebars. But as always in green, the switch seems too close to the footrest. This is a disturbing hair and this probably requires a little more gymnastics than usual to shift gears. Too bad for this slight “hitch” in terms of ergonomics, as for everything else, it’s cardboard … green! Especially in comparison to the 450 Husqvarna FC I just roll the same week the KXF strikes me as a little bike! Fine between the legs, with closely spaced openings, the cross Kawa gives feeling of being close to the ground, and this undoubtedly gives it a player mind. Its handling is exemplary, it can turn into a handkerchief with KXF 450 2016 who do not reluctant to take the angle when propped support. Accuracy is the game, the bike does what is asked of him without flinching and without surprises. The downside, however, when hits hard in big holes, its front axle moves a little too … Better take a closer look before continuing it.
The first test of the 2016 KX450F is Showa suspension with its standard setting: no need to go quickly to realize that it is much too flexible, so weigh less than 45 kg, it must review the settings. After passing the “pump” to increase the compression of low air pressure, and then adjust the preload of the shock absorber and adjust any settings with a few clicks, it’s already much better. Certainly, the fork should probably be a little more released on the first centimeters to absorb the impacts less sharply, but as is, it works much better already. And the shock did a good job, comfortable and efficient, there is not much to complain about.

It seems a long time KXF angry and cut for Supercross cross … The 2016 Kawasaki 450 displays a very different temperament. The operation of the mill is quick to understand, and this comes naturally: the KXF 2016 responds flexibly to the demands of the throttle, smoothly accelerating, with little inertia and no piston blow low speeds! No doubt, we are witnessing an easy engine. No doubt the new injection there is it not foreign, but the feeling with the throttle up a notch here, and they will be felt particularly after watering of the track making compacted parts of the route for less slippery … This KXF 450 is full everywhere, to the point that you feel not really the force of which he is capable, a lack of expressiveness for a 450 of course… who becomes almost frustrating. Initially thought that the engine will not withstand the overloads, and then finally it does the job without wobbling. Good agreement, the big KXF loses a bit at low speed this year, but he won top! The extension of this 450 to linger longer on the same report without losing effectiveness (what was lacking in the 2015 model) or always be afraid. To summarize this engine, one word comes to mind: creaminess.

Unsurprisingly, electronics remains topical on the KXF 450 in 2016, with three interchangeable plugs to modify engine behavior, ranging from the soft, powerfull or standard. The latter having given us satisfaction and showing perfectly versatile, we kept it throughout this test. For the more demanding, be aware that it can go even further with the new tool Kawasaki to connect and change the mapping of injection but that is optional. Inaugurated by Kawasaki on a cross bike, the Launch Control is obviously the part on the KXF 2016, but use it remains a matter of taste and feeling depending on each driver. To have tested several starts with this device on very dry land, I keep my preference for the method ‘ old school ‘,’ without assistance, which seemed more effective. ” Test Statement: The KXF 450 is your friend

More compact in its 2016 version, the KXF 450 marked us by ease of grip. It not long before having fun riding the Green, a well balanced bike that leaves behind this feeling of ‘chopper’ (high forward) to the Kawasaki so far. However, the Kawasaki 450 cross will not give without bothering to fine-tune its suspensions, at least to strengthen all that seemed far too soft for most of the drivers of more than 50 invited kg… Most probably won’t hesitate to work more on the fork in order to find a good compromise between handling and stability, eternal dilemma… OK, the fork to air this is not simple, but when we understood, the possibilities of settings are endless. Be aware also that Showa has developed an application, SFF AIR Support for Iphone and Android, which can be a great help.
Meanwhile, if the engine of the KXF 450 2016 does not offer this demonic force that can be found on its Austrian competitors for example, ease of grip, its constant effectiveness from the low to high revs or his precision to throttle make certainly one of the most pleasant in its class. While smoothness, told you! Go, I do not hide that the Kawasaki KX450F seduced me and scores serious points to become my favorite heart 2016. It’ll talk… 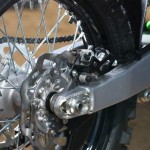 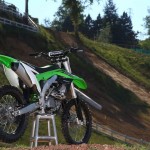 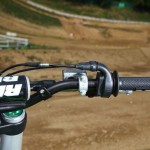 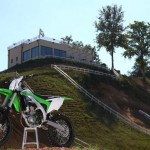 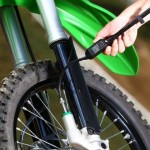 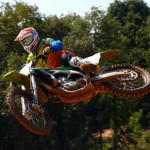