Those who love motorbikes as alternative of urban bike safe supermotard like the Kawasaki D-Tracker 2016. This model for the Asian market has received major improvements to grow as a motorbike school and variant for the city. Its price part of the 28.9 million Indonesian rupiahs, about 1,800 euros to change. New Kawasaki D-Tracker 150 2016 when we see experienced some modified starting from headlamp headlamp shape following more KLX 150 … The design of the shroud and the mudguards with any order revision, now look more sleek and minimalist … A modified exhaust silincer not to miss, and the most striking is the use of alloy wheels and tyres with size 17 inch diameter. The use of alloy wheels 17 “looks better than ever are using the size of 14″ …
Yeah … Kawasaki Motor Indonesia (KMI) eventually remodel also display the Kawasaki D-Tracker 150 … After earlier Kawasaki KLX 150 having a bit of an update version now turn supermoto i.e. D-Tracker 150 … The actual display of the reshuffle of the D-Tracker is already long enough dnantikan supermoto fans … And yesterday on August 3, KMI officially introduced the New Kawasaki D-Tracker 150 model year 2016. Appear fresher and there are some differences when compared to the Kawasaki D-Tracker version before. 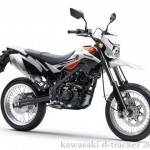 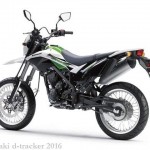 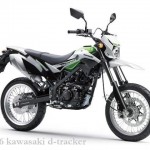 The most important thing in the new D-Tracker undoubtedly that mayor has made going from 14-inch wheels to a few more 17-inch adult. Something that changes significantly the ergonomics of the bike. Also it has residenado the appearance of headlight, the seat, the faired part and underseat exhaust. Special Shiny Yellow or Lime Green editions add a more pronounced front fenders, rims in black, hand guards and keel for a more aggressive appearance. The Kawasaki D-Tracker 2016 equipped with a modest single-cylinder engine four-stroke air-cooled 144 cc and Keihin carburetor. It comes with an upside down fork 35 mm, 5 adjustment of preload rear suspension Unitrak, 220 and 300 mm respectively, 6.9 litre disc brakes, seat height 840 mm above the ground and 120 kilos of weight. The typical frame which would have wiped out in our market.