Motorcycle and quad insurance specialist organizes a championship of motorcycle on ice in different ski resorts in the Alps, this weekend, the fifth and last event of the calendar will take place. 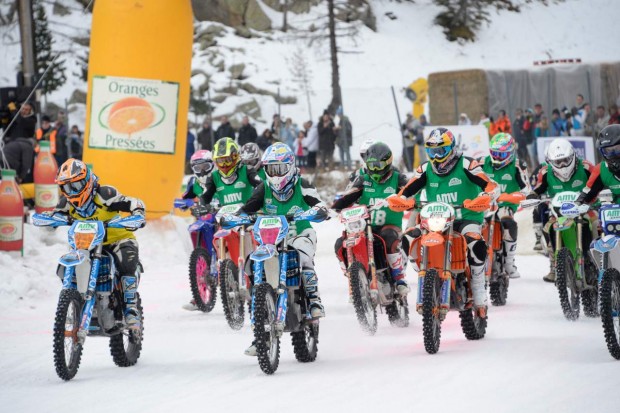 Now that it seems that dirt-track has been established in Spain with the return of the races in the Super prestigious in Barcelona we still look to France to learn about other more extreme discipline. It’s the AMV Cup, a competition within the Andros trophy in several French ski resorts like the of the Alps. Motorcycle Ice Racing, are hardly modified motorcycle beyond of nails fitted in your tires.

AMV continues with its commitment to motor sport. In addition to its support for athletes and events, this time, the specialist in motorcycle and ATV insurance is the organizer of an own Championship. It’s the AMV Cup, a competition of motorcycle which is disputed over ice, in circuits in ski resorts of the Alps France and that this weekend will celebrate its fifth and last test in French-speaking station of Super Besse.

It will be the party end of a competition that gathers in every test – each appointment is two days, with a timed session and two racing-to a total of 14 drivers – 12 fixed as well as two guests, champions of the world in different specialties – mounted on dirt bikes or enduro, without hardly changes, only necessary fasteners to roll on the ice. The permitted sizes range from 125 to 300cc 125 to 450cc for the four-stroke and two-stroke motorbike.

The next weekend, will decide the champion of the first edition of the AMV Cup after played five tests in the different locations in which has elapsed the singular Championship. In the absence of the most recent test, Sylvain Dabert is the leader in the overall standings, followed by Vivien Gonet and Noel Duvert.

After obtaining his repoquer of Dakars, the pilot AMV Marc Coma speaks on the original test:

Marc Coma Said: “As lover and the mountain bikes, I think that this test should be very fun. From the outside, it seems that having fun as children and that is a good ingredient for all fans of motor. It is good that initiatives like these are taking shape since they are very good and positive ideas to promote the world of two wheels. Someday I’d like to try sensations that you should observe these conditions. It should be interesting. In fact, I’ve tried something similar but in all four wheels, specifically in the G Series, and the truth is that I had a great. “In addition, lovers of motorbike costs us very little point us to whatever.”