Penultimate variation of the Trepistoni 800 platform, the MV Agusta Stradale derives directly from the rival. However, the new bike of Varese is much friendlier and touring than its quasi-jumelle. 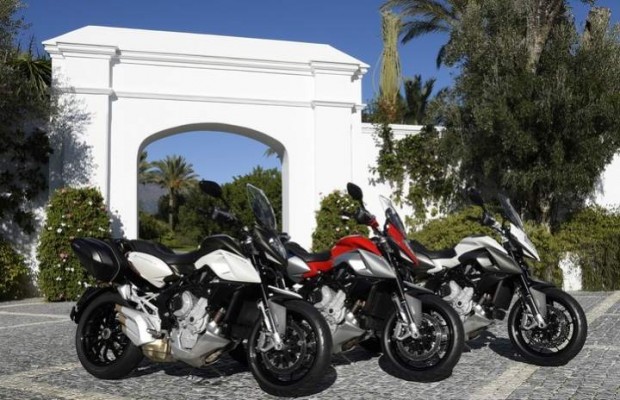 First test in southern Spain, where it must be nice and warm. Yet a MV Agusta 800? Yes, yet another. But the brand promised us: the Stradale is the penultimate to use the Trepistoni platform. The test Turismo Veloce that will be offered in spring for year 2015 will be the last model to resume this technical basis.

Yet a new nickname only cosmetic? EH well no, because the MV Agusta 800 Stradale is much more than a rival with saddlebags. This bike is important for the brand because this is its first step into the world of tourism. But tourism in Varese sauce of course. 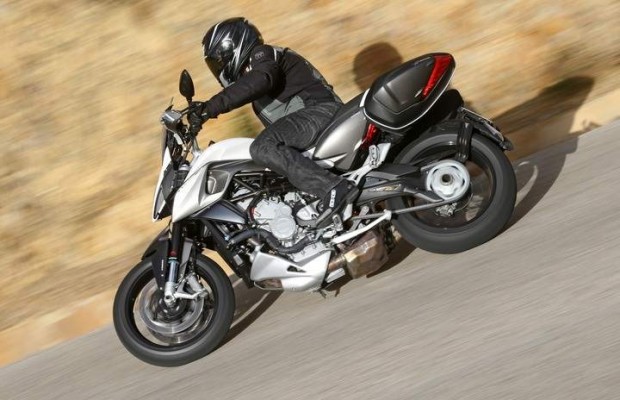 Departure from Paris – Charles de Gaulle Airport:-1 °. Arrival in Malaga: + 24 °. And a Stradale to discover in the mountains of the region of Ronda. The day is going to be easier said than done, In my opinion!

Now that everyone hates me, a little detail the last born of the MV range. The relationship to the rival is obvious: same aggressive lines, same provocative design and of course same motor vibrations, not including suitcases, she of the hangover this Stradale and seems even more coherent than the rival. However several points have been amended in order to stick to the philosophy of the Stradale. 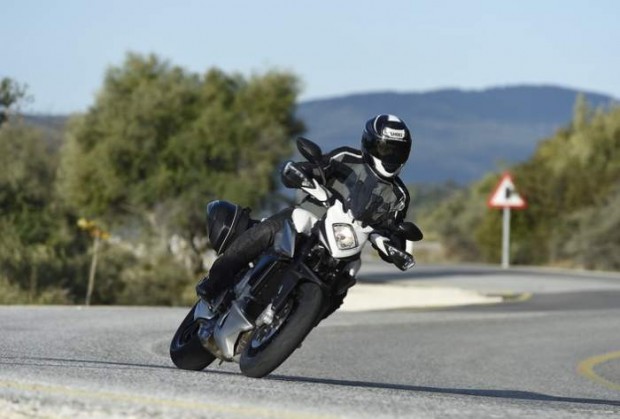 In addition to the removable side panniers, already not well large, are amputees of some space to accommodate the rear optics, there is a saddle a little bit less high, placed mirrors in a more conventional manner and an adjustable windshield on 50 mm manually but without tool.

Finishing, assembling and manufacturing quality are always progressing without perfection: still a few ugly cables and necklaces, especially on the left side, but the fuse box has finally disappeared from the landscape! The shoe and other beautiful pieces in brushed aluminium is made by honor to MV.

Despite the lowered seats of 10 mm, with a reduction of than 1.75 m may be a small fair and put both feet flat will be reserved for the largest. The Nice ergonomic saddle offers a good posture, and its padding seems correct static. 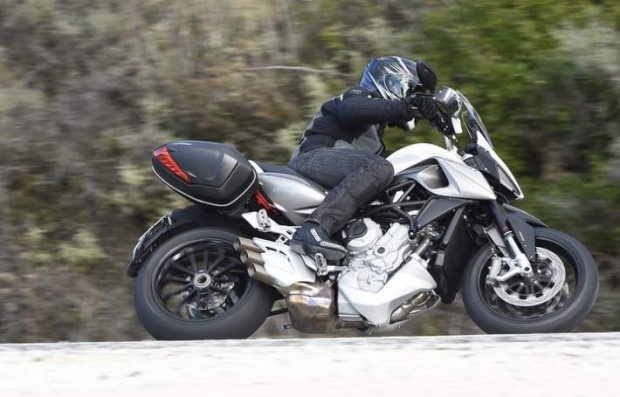 The digital dashboard’s new generation characterized by a black display on a white background is much more readable than its predecessor with its white lighting, even if certain information, including the clock, are too small. 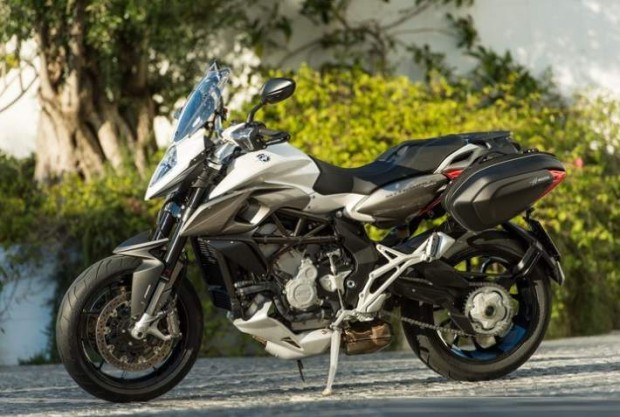 Grip easier… or not!

Despite the touring of the Stradale orientation, the sonority of the 3 cylinder MV Agusta remains aggressive and its non-existent sluggishness. So in this version the block delivers “only” 115 horsepower in the free version: sufficient assures us there, because the curves have been reworked to improve strength and availability. Our Posse starts gently and started at low speed is done without thinking… for which will have already been a few kilometers on a rival!

As for others, the perfectly upright position coupled with the close handlebars of the bust, has what divert: it is closer to a supermotard of a roadster. You however eventually be and provided by the wide handlebar lever is nice in town: it spins much helped in this by the 181 kg dry advertised carefree unless at the time you want to switch between the queues of cars. 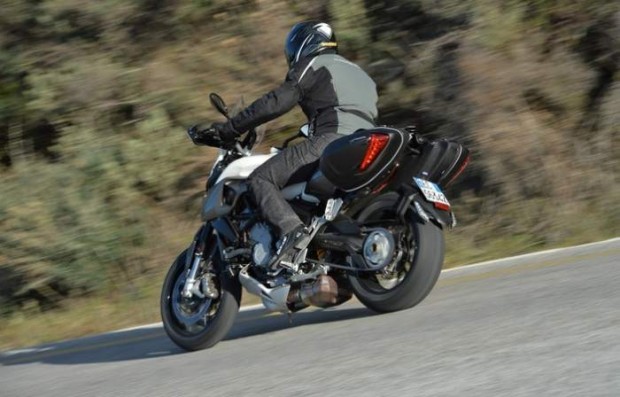 Mapping set to Rain, the motor is flanged to 90 c. and his response is to the winded kind. Perfect for the Parisian time to at the moment! On this mode, the traction control is maximum but does show not too intrusive on soil dry both the engine properly.

With 150 mm of suspension travel and more comfort-oriented hydraulics, they say that can pass holes, donkeys and rumble strips without batting an eyelid. However, depreciation is closed for a machine intended to save his crew. Fortunately, with triple settings front and rear, should be able to play click the first stop.

After afternoon with a good lunch break bah what?, we again start and become return to the road. The temperature is almost summer and the bike behaves better now. The adjustment session has borne fruit because the Stradale digests better holes and bumps, keeping his focus more calmly. 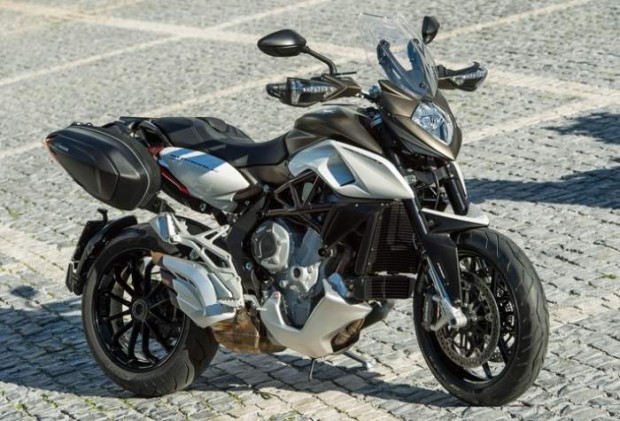 Indeed, it still increase rhythm in order to push the chassis, well helped by the 3 cylinders, still as powerful and temperamental. Up to 8-9 000 tr / min, the boost is generous, but beyond the horses landed in force and the Stradale pulls on the arm. The shifter, almost transparent at full load is more present and more abrupt on the net of gas. However, the part-cycle is not disrupted by passages of speed.

Here are some spec pictures of MV Agusta Stradale 800 in gallery bellow. 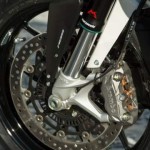 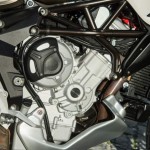 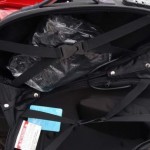 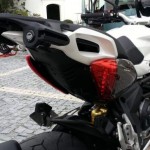 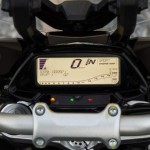 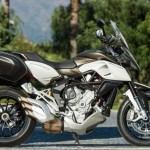 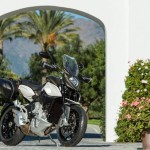 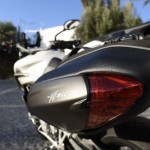