Honda CRF450R, this is not the novelty of the year, the Red having evolved considerably last year and leaving the spotlight to her little sister for this vintage 2014. Then how to push a little further our trial until 2013? Simple, we got in real conditions: it is left for a weekend of racing on the Honda! 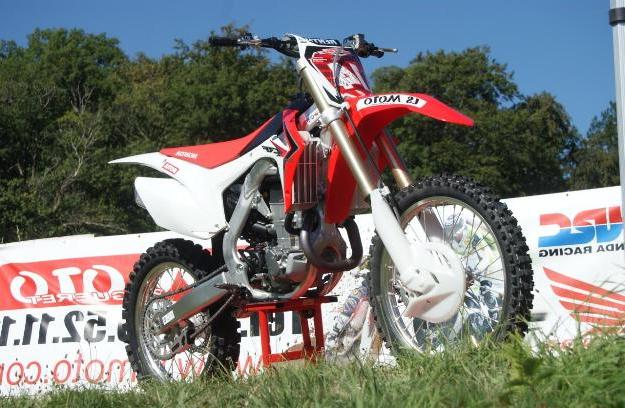 While our readers focus on the testing of the new Honda CRF250R on the hot along circuit, I began to share my test the Honda CRF450R 2014. The bike is very close to what it was able to discover last year when it’s full facelift. However, the Japanese have made adjustments to the level of the fork and engine with including a new injection system.

In short neither more nor less than the tweaking. It’s decided: history to change the grind of testing and make my account in actual use that is worth the FIU, my test will result in a trial run with the Honda CRF450R 2014 Cross on the circuit of hot along for acclimatized me to the heavy-duty and two days later, direction Craze for the final of the trophy of the limo! 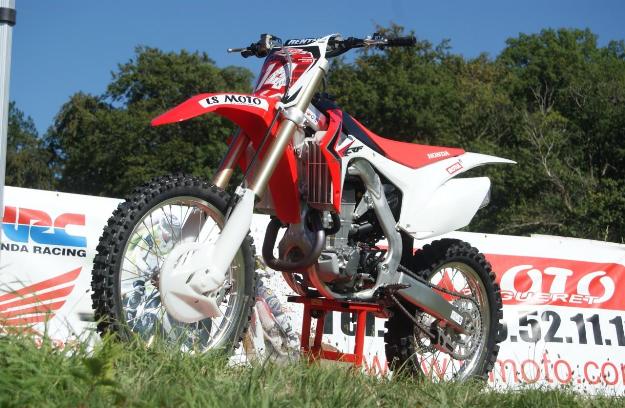 Visually, there was no change from last year: it must be very prudent to differentiate eye the Honda CRF450R 2014 2013 model. Sobriety is always required: certainly the bike breathes seriously, with irreproachable finish quality, but the Red will hardly dream sleek motorcycles enthusiasts.

Nothing that a sole engine we would already pleasure. But we have no doubt that by dint of claim, Honda eventually sold! It lacks so overall originality, except as regards the dual exit exhaust as the Honda is the only 450 of the market to be equipped.

The first contact is very fast, as often with the Honda, its brands and its place on the bike in a few meters. The thinness of the Honda CRF450R 2014 is still remarkable and the compactness of the whole makes almost forget that we pilot a motorcycle of this displacement. And if it is a pity that the Japanese were slow to equip their Cross of an electric starter motorcycle, at least, the kick start is easy for a Honda CRF450R 2014. 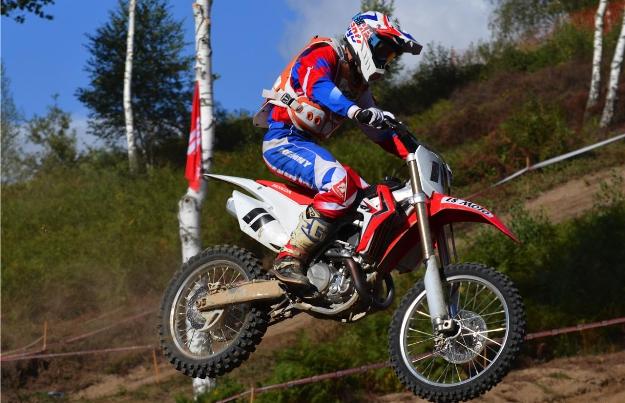 A front axle and a braking to refine

Leg development will therefore be on a plot of hot along, very dry and rather bashed for the occasion. I will put some time to feel totally confident, suspensions asking to be granted. If the shock absorber will not concern pose to set, that really is on the side of the fork that things go wrong.

The feeling is a bit hazy at times, it is still not known how will react the front. There’s no secret: we must try different settings until you find the right compromise (for my part this will be 0.1 bars pressure less and compression settings in the Middle top). Although the improvement is significant, the feeling that the front wheel will not stay on the ground continues. But Cruzan, things will be different on a path to the old with lots of elevation and an excellent grip. 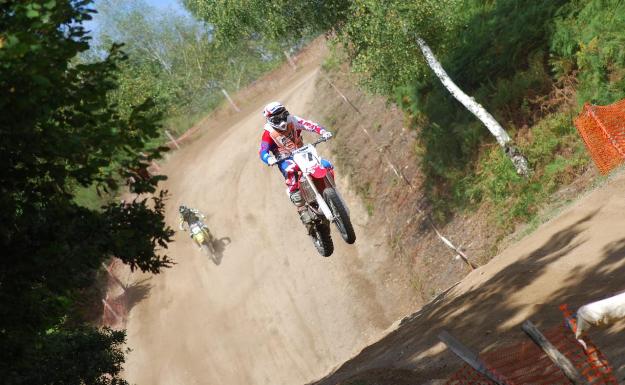 As soon as the tests all works very well in all circumstances, and then shows very healthy that the ground hole. The vivacity and the ease of the chassis are highlights quickly to overlap paths not as easily as with a 250, but almost. At the end of day the Honda CRF450R does not flinch in the bumpy parts. It probably deserves a bit more comfort in any beginning of compression, but it’s still very effective.

I will check after an excess of optimism on a jump in the downhill fork cash very large shocks with more oiliness, there where a fork Springs would become wickedly and me would no doubt more called to order… The grip is good, rear wheel moves the power ground in the big climbs and the front wheel steals not in the heavy braking at the bottom of the downhill. Question breaking, moreover, the Red is perfectible. When conditions are good, the front brake deserves more power while on very dry land, it is hard to right amount, probably related to the behavior of the fork. 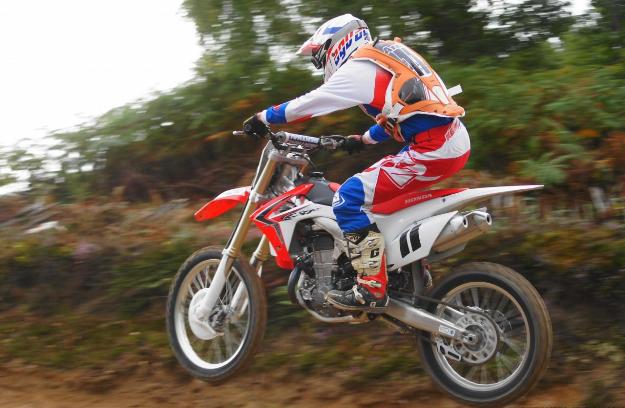 As a first step, the engine shows a little difficult to take in hand, the first dry and slippery field not necessarily helping. But it is especially the piston that gene to the cockpit. Without being completely stopped in turns, the Honda CRF450R stalls without warning several times. Mono seems also a bit more explosive than last year: when the horses arrive, it is necessary to hang. But magic of electronic injection it is possible to modify the behavior and my team manager weekend, LS motorcycle, be it at a glance.

Although Cruzan is a large field where power is an advantage, it is with a soft curve, almost Enduro that I will take the start. A choice that I do not regret, since the piston stroke disappeared, and round and linear motor becomes much more usable. 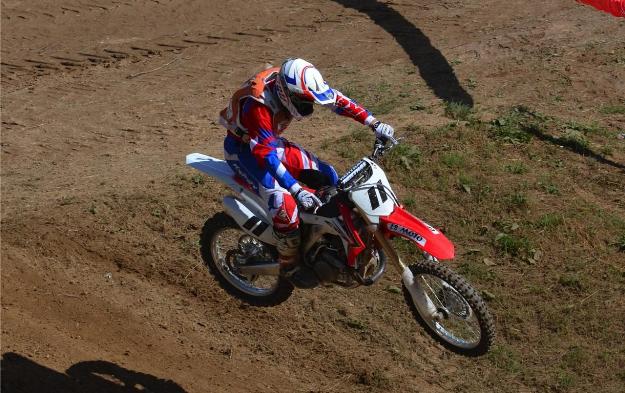 This allows one hand to wrap with efficiency and secondly to attack and blow some dust to blow of clutch support without being (too) snatch arms. It has force the mill of the Honda but it is less obvious than on a Yamaha YZF450R for example. It is also sire that contained noise (106 and 107 dB in the meter ‘2 meters max’) somewhat sanitizes the atmosphere of steering.

With three holes hot on three, including one in Super final face, inter alias, to a motorcycle equipped with a launch control, it can be concluded that even in soft, the new Honda CRF450R 2014 has the resources to do well! The extension is still not the strong point, but if it does not gain in performance when it comes to high speed, it loses not nor. Something verifiable at the end of round, when mount reports can become a great effort and keep a little too long on the same report… Sorry Honda France, but it were hard, and had to try! 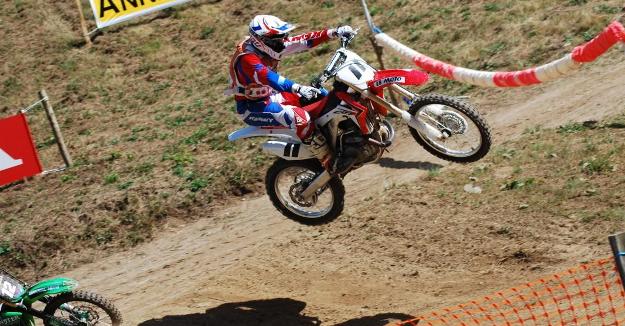 Appraisal: An excellent base, but the testing is necessary

A race weekend later, several aspects emerge so this test of the Honda CRF450R 2014 in real conditions. First natural ergonomics remains one point very clear in the red, but we must admit there are a few adjustments to make on the CRF to be perfectly in tune with the bike.

The engine that seems to walk stronger will delight good level drivers and thrill, but for ordinary people it is harder even than last year. The soft curved option seems an adequate solution to make life easier with, first, a deletion of the low speed piston blow that avoids kick shots repeatedly…

The chassis is truly a Honda CRF450R with stability without great reproach, that when the ground hardens, the feeling with the front axle is still perfectible. Finally side tariff, we are on the right track, frame red requires. Licensees will benefit from a special rate of €8 290 instead of €8 690 (insurance flight and transport included). 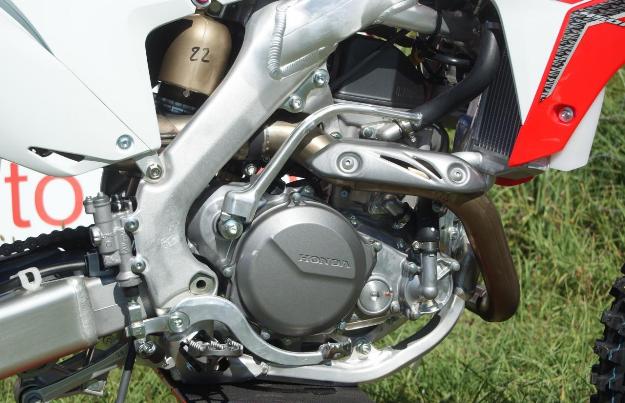 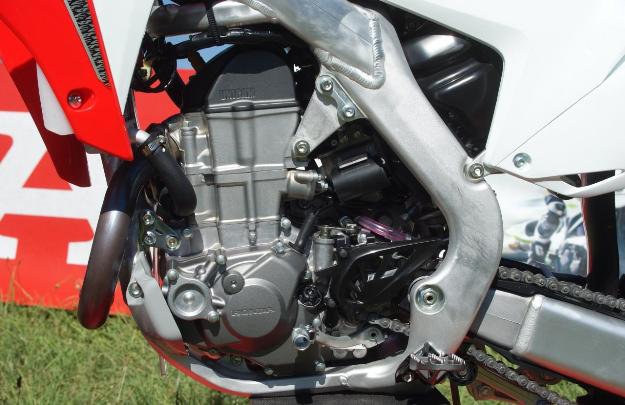 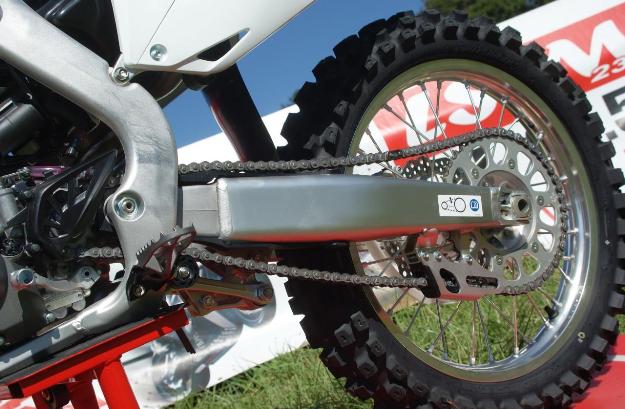 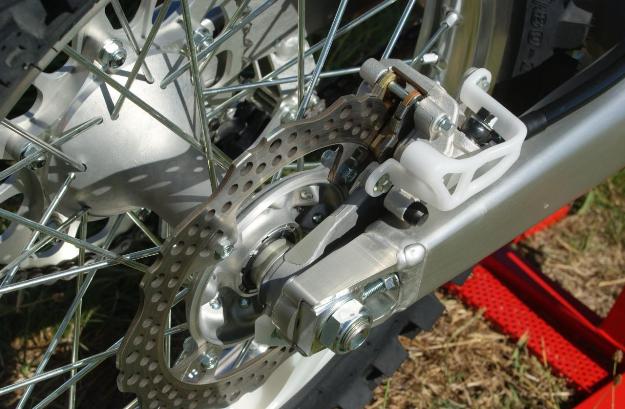 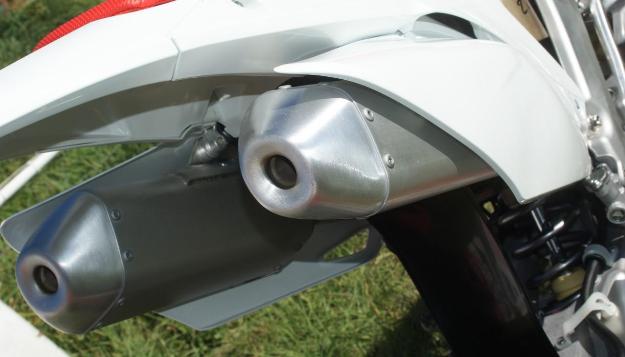 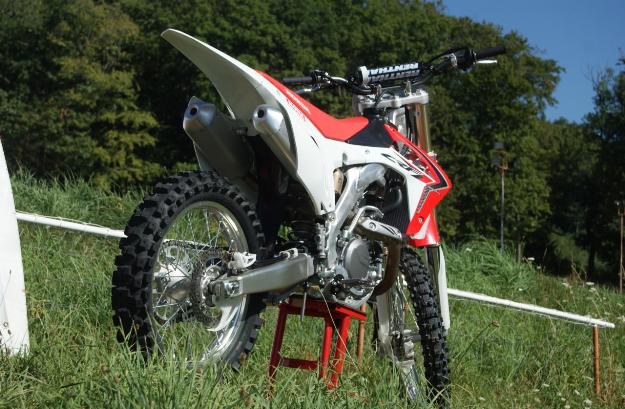