If these Honda CBR 650 F and Kawasaki ER-6f share similar attributes, but also a great and a philosophy that one would think almost identical, the teaching of this test shows that these two motorcycles in reality each retain their own personality and their respective pre square for expression field. 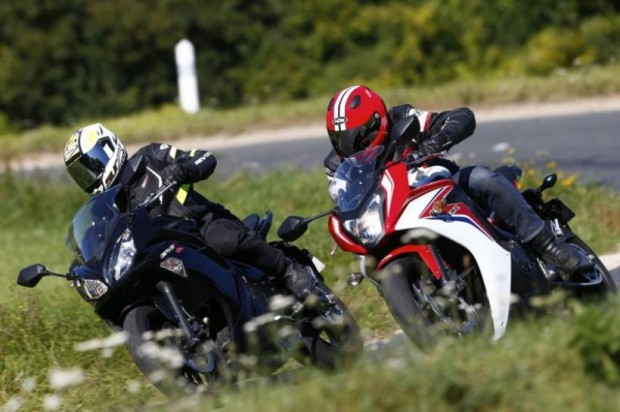 MUST RECOGNIZE that, when compared to their roadster, we ask the question. At least Honda and Kawasaki catalog, both models “entry level” – and medium displacement – that are the CB 650 F ER-6n and then begin naturally in opposition, with different weapons maybe, but with a close enough philosophy, at least in their destination. Logical to say that by choosing them for streamlined, it will be the same. Well no.

Much recognize immediately that these two models are not struck us as close as what we had imagined and these are some specificities compared to roadsters that clearly put their differences highlighted. We could start with that symbolizes them more road orientation: their protection. A simple version topped with respect Kawasaki ER-6f is satisfied with a fairing, while the Honda CBR 650 F receives a full fairing logically more enveloping. Until then, however, the comparison holds. The coverage provided is correct and if the feet are better protected on the Honda, it is the bubble of the Kawasaki shows that the most effective. Say that it is the last bastion able to play all the turmoil would be lying, emphasize that it ensures satisfactory protection proves correct. 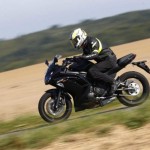 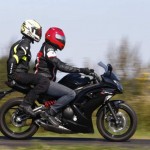 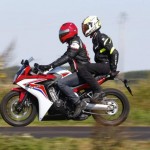 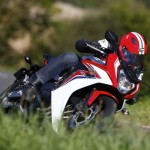 The biggest – from 1.75 meters – will just need to slightly lower the high speed head to save up the helmet, and by extension cervical. Beyond the bubble position on the Kawasaki shows the most accessible. In any case the most natural. Well, it is not that of a trail either, but with a fairly narrow hanger handlebar and placed well above the upper triple clamp, take control of the ER-6f does not impose any special efforts. Chair such position, the arms well below the axis of the shoulders, it is sufficient to protect completely behind the bubble, quietly dumped his body on a tank with a rounded shape.

On the Honda, the driving position is much more typical sport. The short handlebars are placed just above the triple clamp, which already includes having arms outstretched, and especially to switch his torso forward to seize them. Well, this is not the geometry of its supersport cousin, the CBR 600 RR, but the inspiration is obvious and to hide behind the small bubble, no other solution than to come and put his chin on the tank. More tortured position, the CBR 650 F paradoxically offers a better seat comfort. The element of Kawasaki’s embarrassing at the crotch, the outer edges of binding inner thighs. A note brings a slight damper on the partition versatility than we started playing the ER-6f.

In this register versatility include the good work of suspensions, which provide great neutrality. Almost a little too much sometimes, since would
appreciated a little more responsiveness, particularly enjoying a brighter damper rebound unavailable setting. No not on the Honda tuning, and as the Kawasaki, the only adjustment variable concerns the preload. Yet in their original configuration, the Honda elements struck us more efficient. Not so much in the ability to absorb bumps in the road which is quite close
between the two models and in the way to do it. Return is greater, the keenest behavior, more fun. 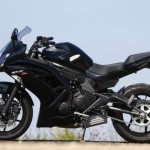 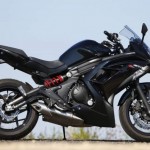 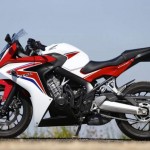 At high speeds, the CBR 650 F offers a better grip, although in absolute terms, when the pace is really speeds over uneven asphalt, our two bikes affi Chent quickly limitations. The suspensions begin to pump, standard hydraulic struggling to roll with the chaos of estates, and the solution is then initially, securely lock arms and legs to channel jitter, then returning. Because without seeming almost undisturbed, these mechanical behavior again quite different quickly reach speeds prohibited. The twin line of Kawasaki shows his temperament from low revs, giving immediate and friendly push in the first meters and then has a convincing lie. Only requirement for a successful take-off: choose a gear ratio in line with the engine speed. Clearly, the sub-scheme is not tolerated.

Quite the opposite of the Honda and its 4 cylinders. While it may appear as lacking pizzazz, it displays other hand flexibility. In 2000 rev / min, third, and even fourth, Honda restarts net without a hiccup. Then of course there is a little to be desired in terms of feelings, because if the engine quickly up in the towers, he never pulls up. Some say it is nice because controllable, others that it is a fade hair. Let’s face it, anyway, this side “Sports seed,” this propensity to push his vocals (although relayed by a caregiver exhaust notes) at the same time as his regime that operates at discretion on a box well layered and precise speed, making this CBR 650 F
frankly a fun bike when we like to tease. She has less character?

That’s right, anyway, the character essence, the twin. Then three … and finally four, even if it still shows good character. He has the Kawasaki, he frankly nothing awful. It’s just a little more assertive. And to magnify – or at least give it even more relief – we would like to hear what she has to say other than through an exhaust which hampers the sound failed. Both the CBR meows, as the ER-6 scrap. The acoustics, not to his advantage, seems simultaneously curb engine performance. One feels that she wants, but failed to fully express themselves. It lacks something to break free.

Finally, at first more bland, CBR 650 F holds pleasant surprises when you apply to play with. And if it does not tear your arms as we have said, it’s life! In a few thousands
rpm, it ajar the doors of the sporting world. Engine and cycle parts were thought to, especially the brakes that significantly outperform those of Kawasaki in terms of bite, power, feeling that the narrowest lever favors sensations.

Ultimately, it is the ER-6f which proves less surprising. More is expected of her little surly side, its midrange force. But this moment does not happen. Unlike the Honda offers a placid face, even soft at first, and provides new sporting opportunities when put in the towers. While not a RR, this F does the job. However, we regret felt tingling in hands steady speed. Feeling “metallic” not really nice. Meanwhile, a comparable pace, the ER-6f purrs cushy. Cushy like the feeling it gives the driver when to turn. With its natural riding position, it rotates without thinking, on the condition of being on the good report. If Honda, flexible mechanical side, accept some approximations in the choice of the report, it “suffers” in this exercise from a position “on the wrists” more restrictive.

Verdict Moto Revue: To summarize the situation, it can be argued that the Kawasaki ER-6f care of his fi liation roadster, while the Honda CBR 650 F intends to slip into the footsteps of his great sporting sister CBR 600 RR. Two different characters produced by a clean mechanical architecture, and specific peripheral elements driving position in particular. Kawasaki has in its availability at low speeds on condition of being on the right gear!, Torque, its voluntary nature, while the Honda relies on its mechanical flexibility and its ability to gently blow in the towers. Two quite marked philosophies you are proposed here. Better equipped, Honda also costs more. Displayed on US$ 9390 is $ 735 more than the ABS version of the Kawasaki ER-6f (US$ 8690) and US$ 1470 more than the non-ABS model (US$ 7960). Honda is it proposed only with ABS.

Finding Vs face to face So close, so far 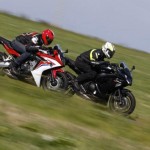 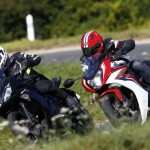 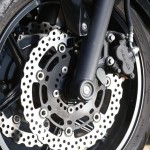 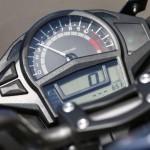 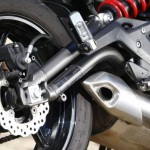 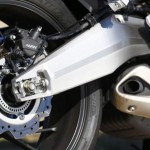 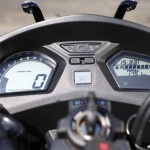 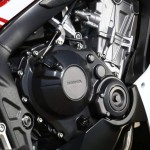 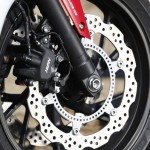