AJP, little Portuguese Builder specializing in entry-level off-road bikes with small engine (125, 200, 250cc) has just introduced a new prototype, the PR7 660 which should be available late 2015. 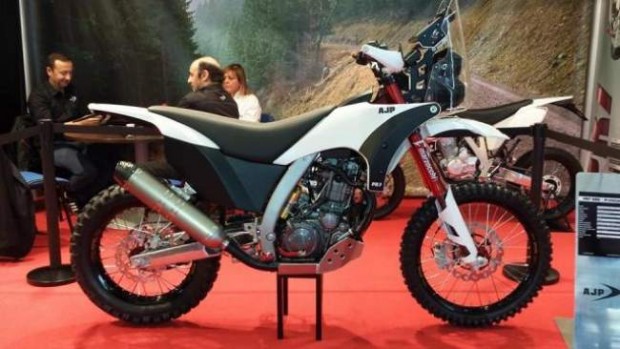 With the PR7, AJP is preparing to join the market niche of adventure works bikes, just as the small company English CCM, which started producing the GP450 Adventure this fall.
Opposite the primes that are each year more sophisticated and heavier trails some smelled a niche market in the bikes light and well equipped to go where the mastodons spend more. Since the cessation of production of the KTM 640 Adventure in 2007, there is no constructor, which proposes in its catalog a motorcycle less than 160kg, with autonomy, good off-road capacities as well as the ability to ride from long distance with luggage. 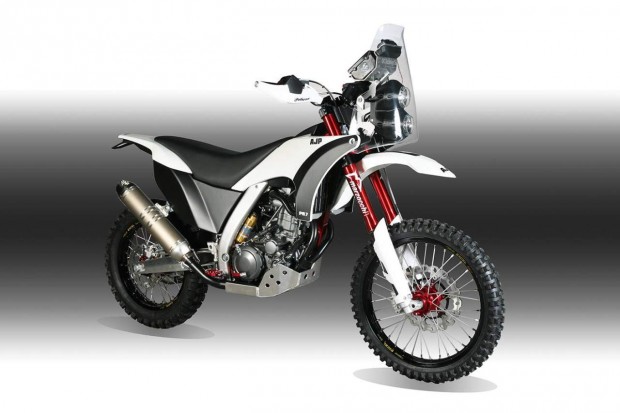 The very successful look of the PR7 is strongly influenced by rally bikes. Double bunk lighthouse, as well as the transparent wind jumps are not reminiscent of a certain KTM 450 RR. The engine will be supplied by Minarelli. It is the same 660ccm3 that team the current Yamaha Tenere 660 and which has virtually not changed since 1991. With 48cv and 58Nm, this isn’t a lightning war, but its reliability is more to prove. There are many that have exceeded the 100’000 km.

AJP has developed all the know-how of the House to produce a bike that is performing in the field without sacrificing comfort. A fork Marzocchi 48mm with 300mm of travel coupled with an Öhlins shock equipped with a race of 280mm, it gives a motorcycle with a guard 300mm ground enabling it to clear almost all the obstacles.
The wheels will be standard sizes of the enduros, namely 90/90-21 and 140/80-18, the best compromise for the field. A 300mm disc at the front with two caliper pistons and a 240mm rear disc will be in charge of stopping the beast. No information concerning a possible ABS. 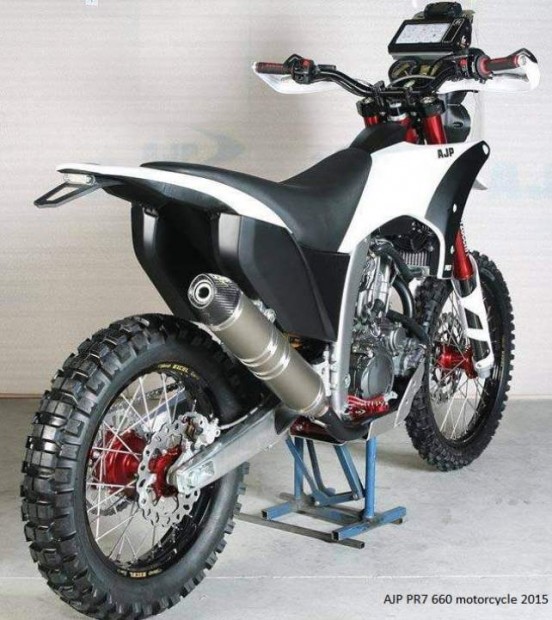 Autonomy should not be outdone because centralized under the saddle tank has a capacity of 17 litres. Given the simplicity of the motor, can expect autonomy bordering the 350 kilometres.
The framework will be a production hybrid steel/aluminum very light, as on the rest of their production AJP. The steering column will serve as oil tank. The PR7 dry weight is estimated at 155kg nearly 30 kg less than the Yamaha Tenere 660, which shares the same engine.

The pictures of the prototype are represented with complete instrumentation for the rally-raid. However, we doubt that this will be his first vocation, because since the adoption of the displacement of 450ccm, rally engines have been a sacred cure to weight loss, and now there are 125kg dry. This AJP would again be a bit heavy.

Already, the AJP PR7 looks like a very interesting alternative for globe-trotters who love off the beaten. The price was not yet communicated, but there is reason to expect that it does not exceed CHF 10’000.-, compared to prices contained from the rest of the production of the mark.