Suffice to say it right away, the Versys 650 and 1000 have been revised thoroughly! Kawasaki has indeed redesigned at the same time the two models to apply the same philosophy and have a strong family identity. Let’s start with one that interests us today, I named the Versys 650. 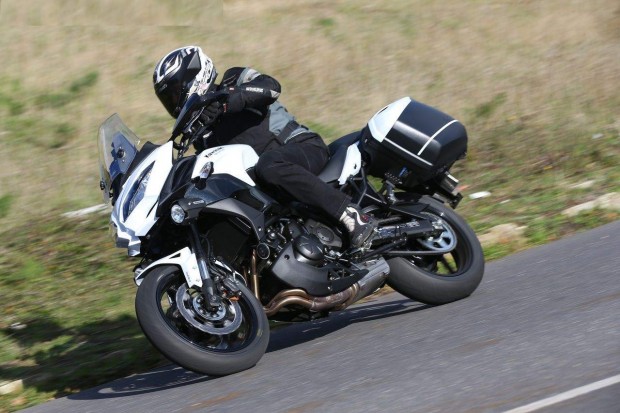 The main objectives in the design of this model 2015 have been give it qualities most sports increase its Touring orientation and finally to make it more fun. To do this, the Versys will review not only on aesthetics, which was much needed, but also at the level of its part-cycle and its engine.

Begin immediately by what is seen the most: design. The Versys is a sacred bond in front with a modern, more aggressive and especially more conventional line. Exit so the lighthouse way Cyclops and Hello to the double-optical and a little more sharp lines which gives to the Versys a more serious look, or even better bike finished and more adult. It should be noted at the level of the Touring guidance, from the conception of the motorcycle, the suitcases have been incorporated into its line in order not to ‘added pieces’.

Regarding the part-cycle, the attachment points of the engine change and are for those located at the front, with grommets to filter the vibrations to increase driving comfort. Suspensions are greatly changing with a new fork of 41mm including the adjustment of preload on the left tube and relaxing on the right tube. The rear monoarmortisseur is still in lateral position and without rods, but is a new model coming from KYB, it is also adjustable also in preload and relaxation. 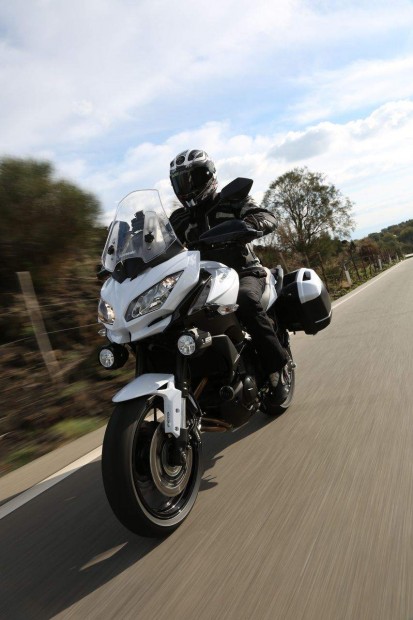 The master cylinder ordering two drives before petals is also changed to bring more power and progressiveness to the calipers which are also new. For the rear brake, the disk goes from 220 to 250mm for added strength. And, do not forget to mention that braking is under the supervision of the new Bosch 5.7 MB in place and place 8 M version that was the former Versys. The Kawa’ wins there greater computing capacity and weight reduction.

With regard to the propeller block, vertical twin sees its power switch from 64cv to 69cv and torque increase of 3Nm 7 ‘ 000 rpm. This increase does not occur at the expense of gasoline consumption, since this last fall of 2% and autonomy should similarly make a leap forward, the reservoir from 19 to 21 litres. When you talking about orientation Touring…

Protection has also been revised, the wind jumped is adjustable by 60mm without tool, but not rolling, and passages of air between the high and low of the shroud have been added to reduce resistance to the wind and create less turbulence for the driver and his passenger.

Since it invites us, it’s time to climb in the saddle! It is mellow to perfection and is not too high and is especially close to his join to reservoir. Suddenly, even with my four meter, or a little less, I have Pack me with age, I have two good feet flat on the ground at the judgment. Let’s go back to the tank, as shown, Kawasaki Announces added two litres, is in any case not by “inflate” so it is close to the level of the knees. 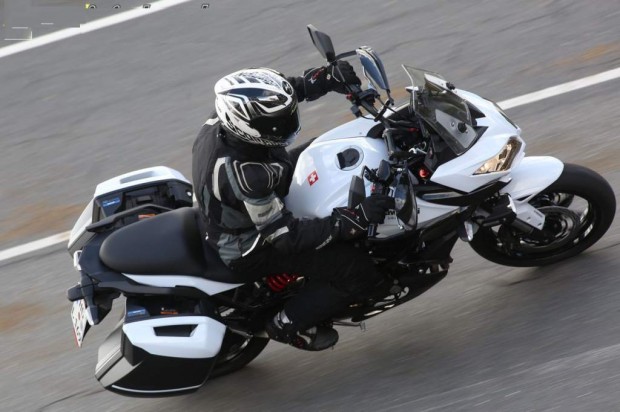 We also note right away that the Green Giant has put emphasis on the sport with a tachometer which throne in high position. Controls are flexible, the clutch requires no effort to disengage and do not tire the left hand even after many kilometres. Only mirrors do not return an image at the top of what is happening behind you, the fault to their somewhat quirky form. On the other hand, the handlebar is not too wide and in agreement with the rest of the template of the motorcycle. It allows a good grip, even for the small stencils that will only feel not exceeded.

The dashboard contains all the necessary information: tachometer, speed, various trips, instantaneous and average consumption, distance remaining to go before having to push, fuel gauge, missing just the motor temperature and a button on the handlebar to scroll through these information.

As soon as the first rounds of wheels, I was surprised by the agreement of the suspensions. The roads of Sicily are not a model of its kind, either in town with many pavers to fit also approximate than the conduct of Berlusconi, as the truffle secondary network of many potholes. The Versys is, however, very comfortable and does not excessively pump neither forward nor back and motor remains exemplary. 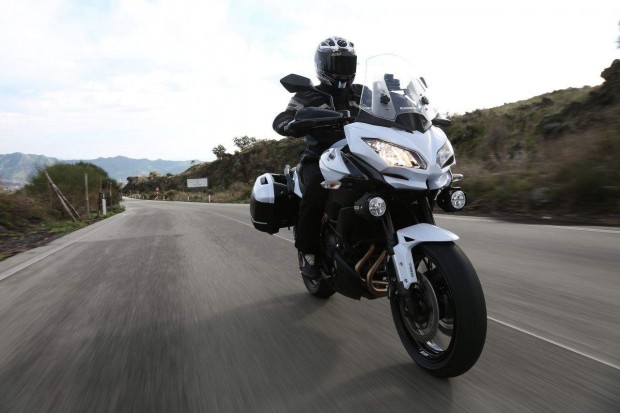 On larger bumps, the rear does not pump, it absorbs and the Versys quickly found his plate, allowing to adopt a pace which can be sustained despite a quality of degraded pavement (Yes Yes remember, one is in Sicily). At the same time, the fork returns good information and allows precise guidance even when it accelerates out of curve and you suddenly want to change direction to avoid the scooter that comes face-to-face with Roberto on the phone and the cigarette to the spout (any resemblance to existing characters or having existed would be quite fortuitous). It is also possible to take the curve brakes the bike is not disrupted unduly.

Due to its reduced weight and the quality of its suspension, the Versys small is formidable in the winding. High position can well understand the road (remember Roberto!) and the engine is voluntary. It allows very low down the towers, about 2’000 rpm on intermediaries without hiccups, and has a sacred raise from 4’000 rpm. It is however pointless to shoot beyond the 8’000 rpm mode ride to focus on the area of the maximum torque. Sport mode on the other hand, it does not rechignera to climb up to the edge of the red zone to 10’000 rpm.

Engine comfort level, we feel no vibration, mounting it in part on silent blocks is a success. No vibration in the handle or the foot not disturb driving. This comfort to long ride without feeling tired or ants in the hands for example, which is very unpleasant. 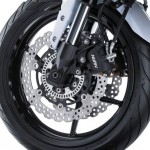 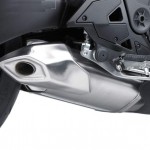 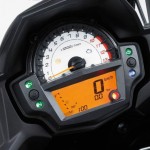 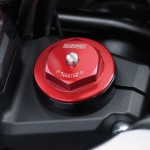 The front brake does not surprise beginners. It has a good attack and teeth worsens as the pressure exerted on the lever. No risk of being surprised by a too Frank attack on the current supersports. On the other hand, although the rear disc is passed to 250mm, it disappoints a bit. Even by pressing hard on the pedal, it gets only a poor slowdown. My taste, gniak is missing and I would have managed to trigger the ABS to the back only at the cost of very supported stops.

For a high motorcycle on legs, the Versys plunges not overly forward when the brakes, even strong. The fork quite flexible for comfort, is well curbed in hydraulics and, suddenly, the bike keeps a proper attitude and the braking energy is not lost in the descent of the fork.

Adjustable bubble on 60mm in height protects. For my part, are not part of the greatest, I left it on the lowest position and have not been disturbed by turbulence, even at high speeds on Highway. Moreover, I believe that in Italy the road signs are only indicators, but in no case the obligations. The shoulders and legs are either not too exposed, which will be an advantage in case of rain for example.

To get back on the saddle, the fluffy felt at the beginning was also present at the arrival. Although is is not saved on the Sicilian Backroads, my back and my buttocks will absolutely not suffered from the journey. 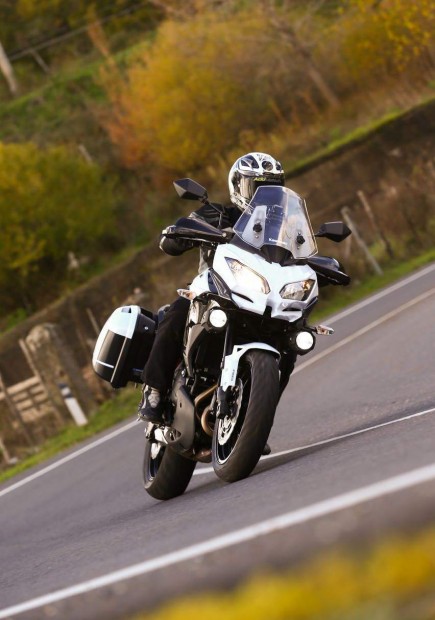 This will be a serious, especially that at the level of consumption, the Versys has everything of a camel. A sustained pace (or very strong), it will be requested that 4.8 l / 100 km… All mated to a 21 litre tank, this suggests an autonomy of more than 320km before falling on the reserve. And players can blithely approaching 400km before needing to push their mounts to join the next pump to liquid gold.

It is worth noting that a Touring kit is available for the sum of CHF 1’400.-. The latter includes suitcases pensionable and the machine colour with the ignition key, the handlebars and the hand guards. Our test machine was also fitted. The retail value of these coins exceed CHF 1’900.-, so why deprive, especially that thus equipped, the Versys becomes a formidable traveller. 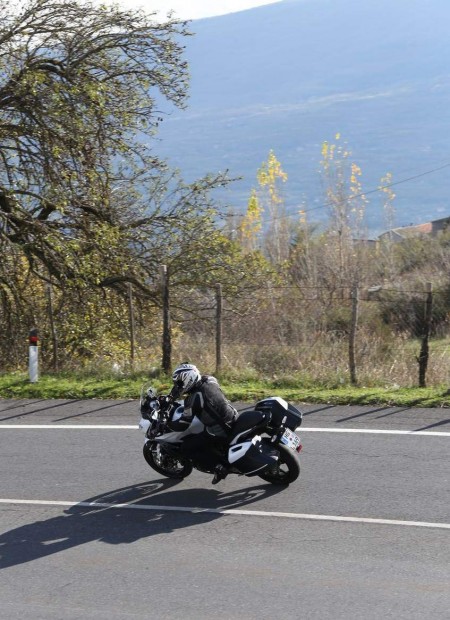 In the end, we will remember that upgrading the Versys is not confined to its plumage, and according to the fable, his ramage is at the height. The modern and aggressive line makes the Versys endearing machine visually. And once in the saddle, you can only praise its dynamic qualities. It will be just the reproach of Miss a bit of bite to the level of rear brake and its retro design shape that prevents a good view of what is happening behind. Women will also be welcome on board due to its height of saddle not too high and narrow. 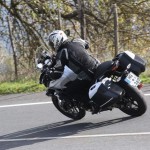 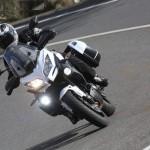 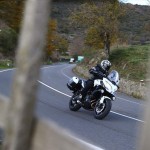 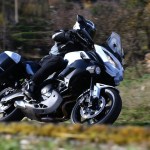 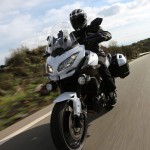 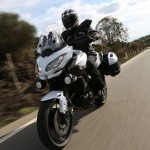 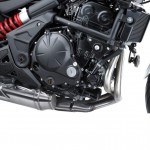 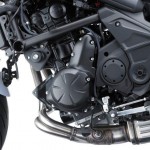 Moreover, the Versys 650 confine all travellers in grass than those wishing to shoot kilometre with a reduced budget. Because with a price of CHF 9’490.-, it is a real bargain and once the Touring kit is added, one arrives at pei