Usually in the bike industry and in other industrial fields are used more or less surreptitiously copying ideas. Lately we are seeing a resurgence of retro models and cut sections, which now serve as an excellent basis for preparations of all kinds. Triumph Bonneville and its variants try Triumph Bonneville and his Yamaha Yard Built program for SR400 and XJR1300 are examples. 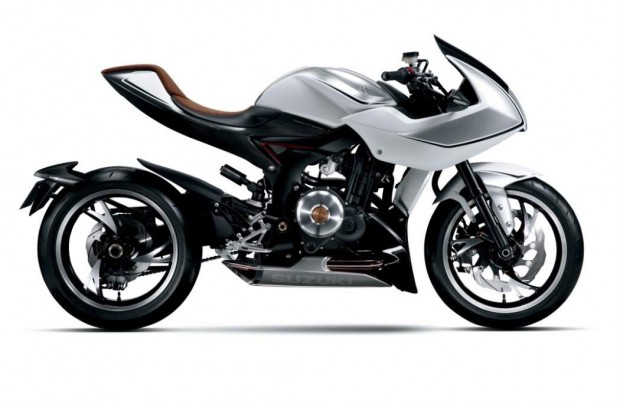 Well, it seems that Suzuki also want part of the pie as the presentation of the Suzuki ‘FatMile’ Concept.
Presented at the Motorcycle Live 2014 in Birmingham, this prototype is neither more nor less than a Suzuki Bandit 1250 Custom properly respecting the 1,255 cc four-cylinder engine, the chassis and the tank to get its most aggressive retro vein. Some of its specific components.

Three models of Suzuki Concept will debut at the United Kingdom Motorcycle including live awesome turbo recursion, which is displayed next to the Bandit based on measurement ‘FatMile’ and Suzuki ‘FatMile’ Concept 2015.

First unveiled at the Tokyo Motor Show, the recursion is determined by a fine similar twin with intercooler engine turbo 588cc, designed to improve performance and vigor competence. Enfolded in a lightweight chassis and thin elegant bodywork, recursion has racing machines of the performance with a larger capacity while maintaining the characteristics of manipulation and the economy of small models. 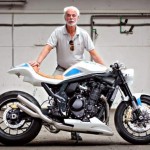 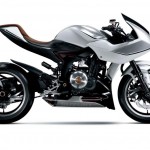 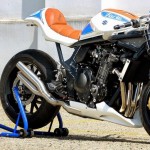 Join the recursion on the like Suzuki at motorcycle Live is the usual ‘FatMile ‘. Based on the engine and the chassis of the Bandit 1250, the ‘ FatMile ‘ has been designed using the approach Kohei senpai-Japanese – where a young designer, works with and learns of a set designer and a veteran. ” Here is Daniel Handler worked with Hans A the legendary designer. Muth, architect of the iconic Suzuki Katana.

The Bandit ‘FatMile’ uses four horsepower 1255cc engine online and modified Bandit framework, but packs everything in a round Lighthouse café-style classic racer and a custom seat. The tank is still the norm, but with a custom painting system. Forks, Brembo monobloc calipers come directly from the GSX – R 1000 and custom four-two babies of four exhausts help complete the custom look.
He seems to expect a second youth to the Bandit 1250 with such projects, Guajara?