Although more accustomed to the image of the slide that bucolic ride to the sound of a ploum-ploum, I absolutely required to perform the test of this 1400 California Custom because if there is indeed a historic brand in Italy which gives worth to return slowly to the front of the stage while maintaining its long traditional history is Moto Guzzi. 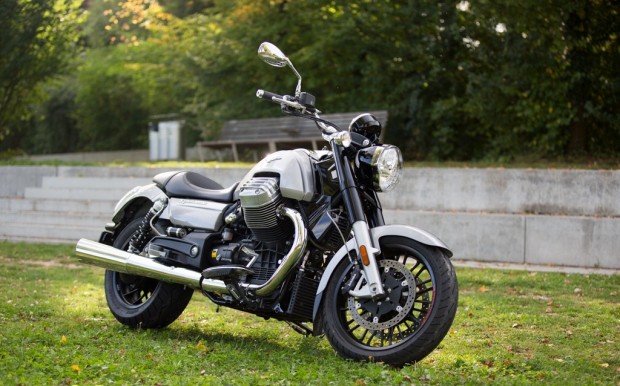 The history of Moto Guzzi goes far, the company located in the region of Lake Como was established in 1921 and we must know that the Guzzi name comes from one of the three robbers behind the brand unfortunately was killed with his aircraft during the first World War. It is in his honor that the other two founders Giorgio Parodi and Giovanni Ravelli adopted the name Guzzi motorcycle and took the eagle was the symbol of their squadron for their brand of motorcycle. 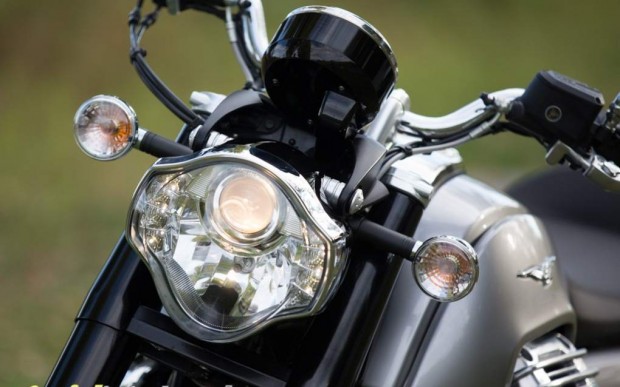 The historical side is done, I must admit that I like “those who do not like the others” and it is a world where it is rare, it is one of the custom. I must say that Harley-Davidson has largely set the course of the competition standard copy excessively to try to capture market share. California Custom differently, first and foremost with his 1400 V2 facing the road and also with electronics.

Going to take possession of “my” Calif ‘Turns Bikes in the garage Vésenaz, the impressions I had while watching the pictures on the Net were immediately confirmed. It emerges from a sense of Custom Italian raw power, and then for once I’m not talking about horses, and fluid curves are generous and despite the fact that we feel that the beast weighs his quintals of good steel, general line is light. 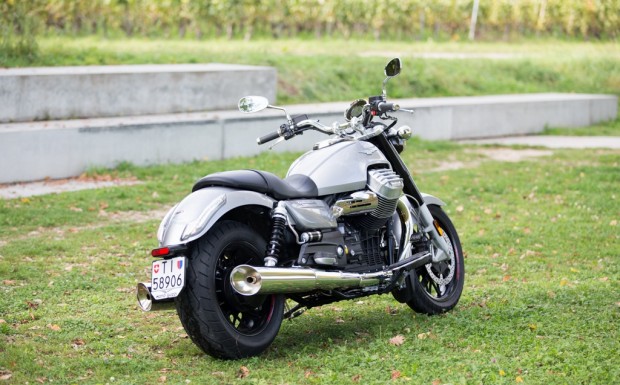 Personally, I love that emit both brimming with hand drums and other generous engine block. When I speak of power here, I see a phallic symbol of virility and almost told me to expose this massive V2 at the sight of all is a great idea, why hide in the frame? Especially with the mixed air-oil cooling, the cylinders have a respectable size. The long chrome exhaust that ends after the rear wheel gives character to the Guzz ‘and lengthens the line. It’s just a shame that the stringent certification standards as the castrates, I would have liked a little bigger than the outlet pipe which terminates output.

Detailing the rest of the Calif ‘, I tell myself that this is a sacred vessel as it is long and low, it smells scraping steps in roundabouts. Many chrome parts are gray raise my test Guzzi, and most importantly, it is to underline its chrome parts are metal and not plastic … There is no lack of taste are apparent only cables that should be visible, others are well hidden. The headlight is instantly recognizable with its skull-shaped, especially since it is only possible to switch the LED surrounding it, providing even more style to the Guzzi. 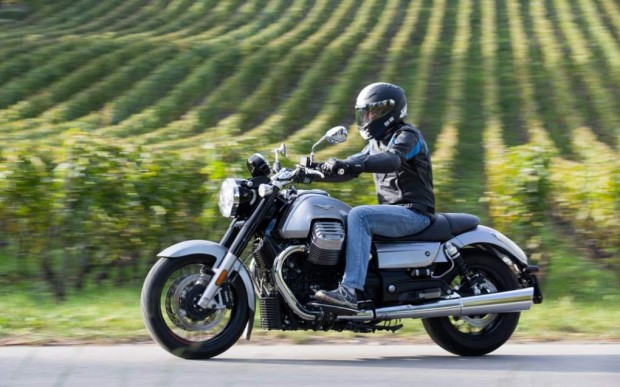 Saddle, pardon the chair looks more comfortable as it is wide and seems well padded. This is followed by the place reserved for your favorite sandbag should enjoy the comfort offered by the ottoman reserved for him as well as the wide footrest. The result is a fluid rear mudguard which ends with two LED lights on both sides, which emphasizes finely rounded line of the back. There is nothing wrong, when the Italians loosen the design level, other nations can return to their pencils! Even with customs …

The battery meter combines traditionalism and modernism with a large LCD screen in the middle that displays all possible and consumption, temperature, motor mode and a plethora of information still trips. 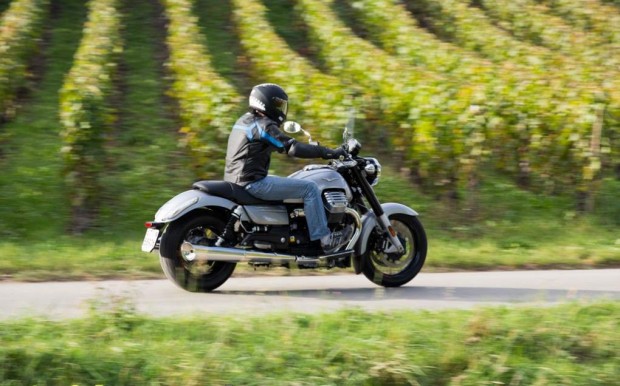 Yep, the 1400 California Custom is modern, it is equipped with a three-level traction control, three engine modes (Rain, Touring and Veloce). The first limiting the torque and power, the second favoring the smoothness but with all the power and the latter being the most wild. It is also noted that there is also a cruise-control.

Come now is the time to press the starter button and then … we are not disappointed! The block moves in the chassis, engine and immediately cracked Calif ‘moves on its stand under the onslaught of big pistons. Oddly enough for me, I stay in the saddle, raising the top bracket, used by many years roll on sports … this gesture will accompany me long habits die hard.

Once seated, it should still give a good blow hock to raise the motorcycle side stand, most of the 300kg beast are there. Come now time to go through the first switch double branch that will allow you to stay on top of your own shoes. A good “cluck” accompanies the clutch is soft and there is no need to give too much gas for the high torque delivered by the V2 allows California to take off. 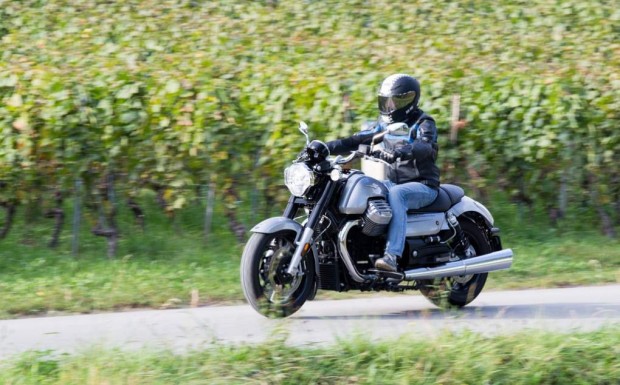 As usual, I start with a ride into town. Not being accustomed to ride with this kind of big beast, I do not try to sneak in traffic, Calif ‘is wide enough, but I feel pretty good overall balance quickly. Once accustomed to having the front wheel a meter in front of the handlebars, and assimilated the manual that goes with the maneuverability of California is pretty amazing in terms of its size and weight, it makes me think hippopotamus in a tutu and ballet in Fantasia: an image of heaviness but a feeling of lightness.

I had always heard of the famous Guzzi torque reversal and after having lived, I must be hooked. It is good to lend a gas in a vacuum and feel the bike switch from left to right under the influence of heavy vilo driven pistons which must be the size of a stool seen the scaling of the beast , missing only the ploum-ploum that go with yes … Because I come back, the soundtrack to the exhaust lacks a little … Re-gniak greugneu of certification standards. 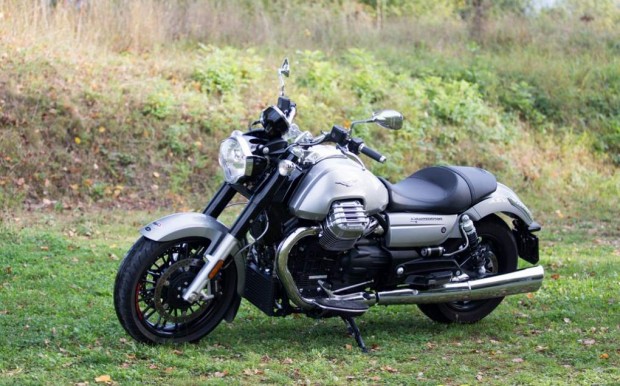 To continue my journey, I decided to go to the edge of the Beautiful Blue aboard the California 1400 and, suddenly, I fade a little more than 500 terminals highway without worry. Just go a little bit head in the shoulders (well, I grant you, I am not the biggest) to obtain a cruising speed of more honorable. This long motorway journey also allowed me to highlight what may be a default fuel gauge. Indeed, it does not fall during the first 200 miles, then loses a bar every 10 kilometers. We therefore begins to imagine a self worthy of a camel in the Sahara to find to watch the next oasis unleaded to fill up pronto.

Once there, I notice more how the big Calif ‘has an attraction worthy of the best US customs authority. Onlookers on my way back and once arrested, they come to meet me for a closer look and ask questions about this custom that just comes from a border close to home. No doubt, the Guzzi designers hit hard and fair! 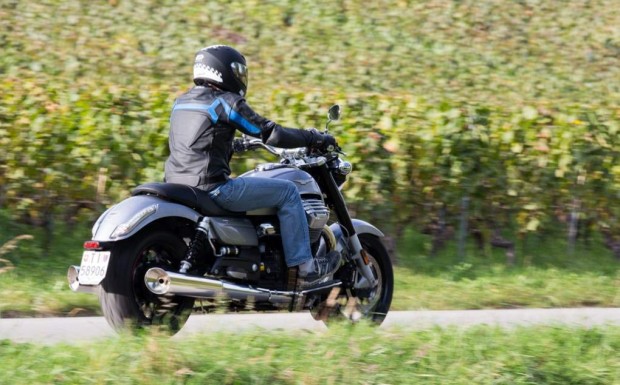 On the way back via the back roads, I have fun playing with the different driving modes, which is more usually found on a sporty or a big roadster, and makes me quickly realize the efficiency thereof. The Pioggia mode or Rain, for example, the couple completely castrated truck developed by V2, in order to prevent evasion of the rear wheel. Touring Mode automatically releases the power block with a soft throttle response, for me it is the ideal way for the ride either solo or duo. The last mode is the Veloce which, although delivering the same power as the Touring, allows an immediate response from V2, giving him a wild side. I greatly appreciated when “pétées sinkers” that allows the Italian low-rider. Outputs curve Veloce mode are muscular and should be seriously cling to branches of the handlebar.

On these small roads, Calif ‘remains very manageable despite its 200 width tire and shock absorber with separate cylinders perfectly fulfill their office by filtering out the rough edges of the roadway, except on really bumpy road where there they admit their weakness reacting sharply. Fork, it does not dive under braking and responds gently while allowing precise guiding of the bike. 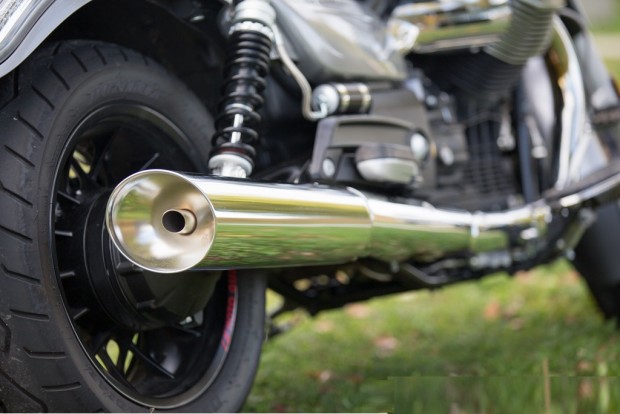 In terms of engine performance, it pulls hard from 2’500tr / min, and agrees to go below but you will feel good that this is not a glass of Chianti, then really takes off vigorously from 4 ‘000tr / min until 7’000tr / min the red zone.

In use, the instrument panel is a delight, with the tachometer read first, although not necessarily very useful because there is no need to pull the engine to appreciate the essence, the ideal is to focus on the couple as explained above area. We can also enjoy the view of the outside temperature, partial dispute, instant and average fuel consumption, average speed … well kind of very useful information. For cons, I happened to see that it took the humidity with a wet sail this light when exposed to sunlight. Maybe a sealing problem with my one test model. 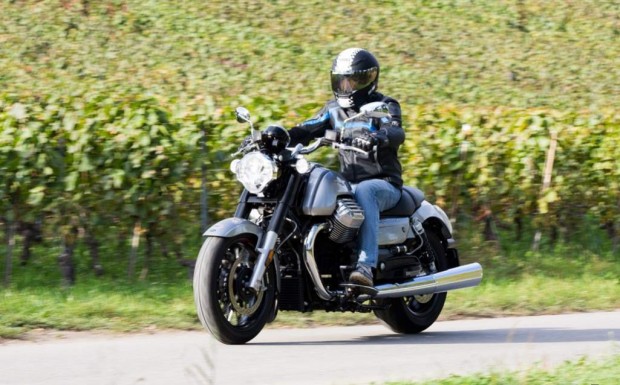 It’s nice to have an engine that pulls strong, must still be able to stop before embedding itself in the trunk of the Clio above you, especially when weighed more than three quintals as Calif. And again, the Custom is effective braking is powerful and enduring. Approval for the brake handle is present and braking with increasing pressure on the lever, without brutality. The presence of ABS is reassuring following roads taken as a block on the front wheel would mean fresh body inevitable … This also works smoothly and is not intrusive or too sensitive. 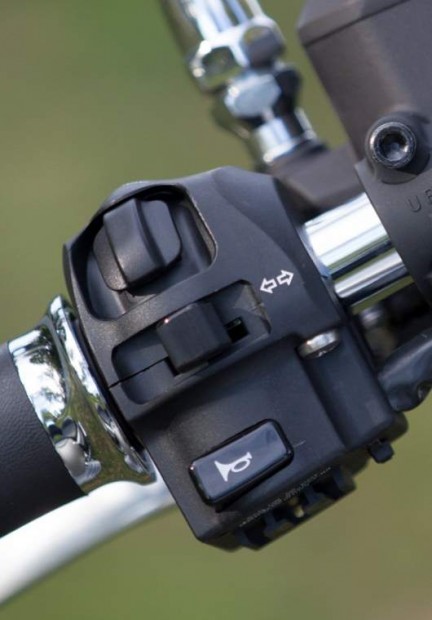 Over the miles, I found this the most endearing Guzzi, whether solo or with a passenger. Moreover, according to the latter, the rear seat is more comfortable. The strong identity of the Calif ‘earned me several questions of whether other drivers at red lights or when I had to park my Custom, which proves the attraction power of the bike. We will therefore quickly to defects Calif ‘as its fuel gauge or the dashboard taking a little moisture to focus on the engine block just enjoyable and healthy chassis. 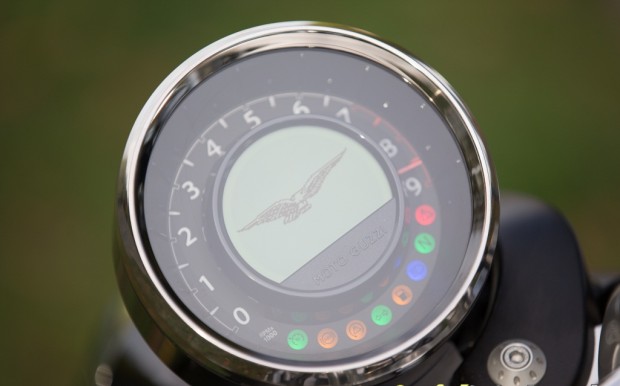 And although the 1400 California Custom is displayed and costs CHF 21’700.-, it still remains cheaper than CHF 2,000 Fat Boy will be its direct competitor. We must not forget that this is not a model that will be produced on a large scale. The Guzz is an excellent alternative for those who do not necessarily want to ride like no other.