Already the fastest trials, Davide Giugliano confirmed by winning the Superpole in Qatar’s second pole position of the season for Ducati. Loris Baz and Tom Sykes complete the first line, a first warning for Sylvain Guintoli.

Its beautiful machine make 10 km / h to Aprilia Sylvain Guintoli, Marco Melandri and Toni Elias, Davide Giugliano has not won less superb pole position in the night Losail. The Italian will be a serious contender for victory on Sunday, especially as it evolves without pressure. The runner on grille Loris Baz also dreams of victory in nearly a quarter of a second of the pole sitter and was even allowed to overtake his team mate Tom Sykes in the year favorite English. But with two Kawasaki on the first line, the world champion can be confident while Guintoli merely the fifth time behind Chaz Davies and do not know if he can count on the help of his companion box Melandri leave him eighth place on the grid, behind the Honda duo Ten Kate. David Salom will be the first Evo driver on the grid, just ahead of a Sylvain Barrier suffered a big highside fall at the end of SP1.

Supersport Jules Cluzel fetched a brilliant fifth pole of the season with a final round made ​​in the suction Lucas Mahias to beat Michael Vd Mark nearly four tenths under the checkered flag. What put the MV Agusta driver in an ideal position for a final victory of the season Sunday against a Vd Mark holding also to celebrate his departure from Supersport in success. Lorenzo Zanetti full for his part in the first line 22 thousandths of a teammate while Ratthapark Wilairot fails in his quest frontline just 16 thousandths. Jack Kennedy took the fifth time before a Mahias which will have a great chance in the race. 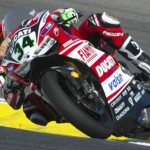 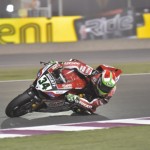 Davide Giugliano: “I am very happy, it was important for me to be first in line. My turn and the fact that I was faster than Ben Spies are positive but the most important is to be consistent over race distance. It was hard yesterday but I’m happy and the team worked very hard. In my heart I want to win but after the last few races, the most important for Ducati and I will have two good races. ”

Loris Baz: “I ​​wanted to have the Tissot-Superpole for my last race with Kawasaki. I tried but I made ​​too many mistakes and Davide was just too fast. However, I am very happy with my lap and be first in line. I have a good feeling with the bike, I love this track and I hope to close the season with two good races. ”