It’s a monster, she’s powerful, yet affordable and, most importantly, it treats daily. Result: the Ducati Monster 821 could become, in 2015, bestseller Borgo Panigale! That led us to oppose its natural rival. 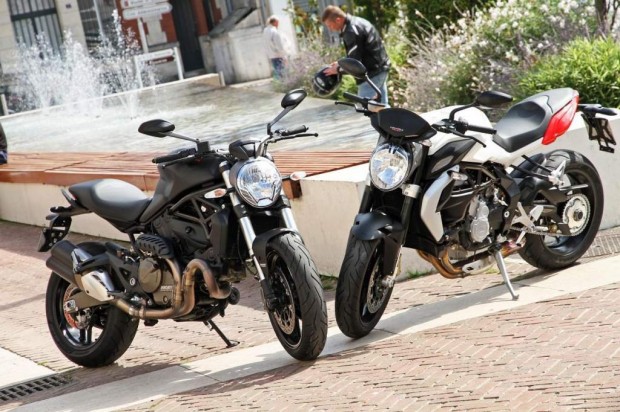 Aah!! Italy … His food, his wives and motorcycles;  Aah that moments! Before your eyes today, two of the most beautiful transalpine machines in recent years. First, the MV Agusta Brutale 800 EAS ABS, a high-performance sports roadster derivative F3 800.

In other words, the equipment is top level and the performance to match, with a three-cylinder inline often impressed us with his health.

Naturally, we had to compare the heart of the charismatic twin of the newest of the Monster. New freshly arrived from the factory in Borgo Panigale, the Ducati Monster 821 has surprised his world. 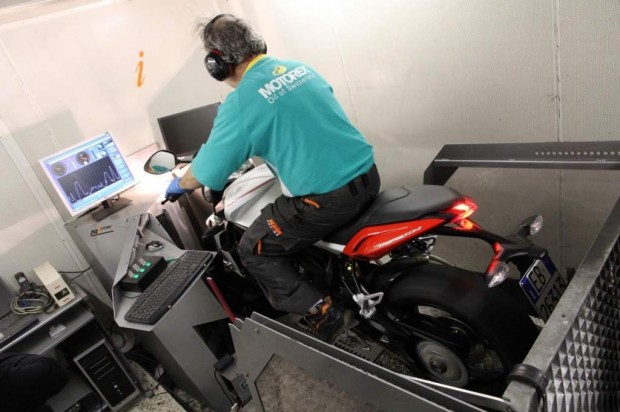 With his “bastard” engine inherited from the Hypermotard family, it replaces almost two bikes in the range, positioning midway Monster 796 and Monster 1100 Evo in terms of equipment and price.

How does she cope with boiling MV Agusta Brutale 800? This is what we will reveal to you without delay, through a comparative full of surprises.

Attractive, is the Ducati Monster often. Comfortable, for cons, this is rarely the case. Have you ever heard the expression “as comfortable Monster” by no means Ben us moreover? However, generations pass and things change.

The ergonomics of the new 821, first, demonstrated relevance. We take fully on board this new “small” Monster with a well dug and height adjustable (785 or 810 mm) saddle! Then allowed to run arms along the reservoir to a not too wide handlebar and requiring less support than before.

Remain plate’s passenger pegs too prominent, and an exhaust manifold that bothers knee and right heel. 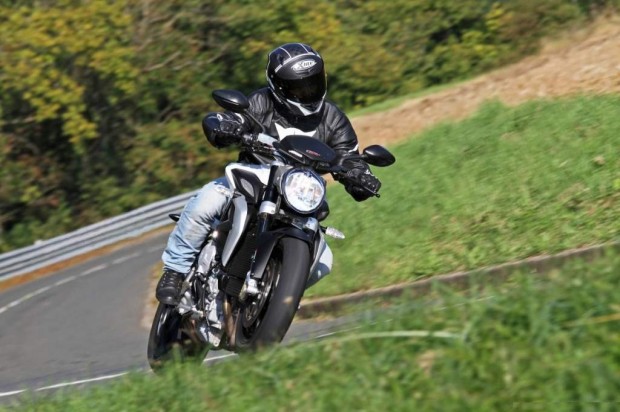 The MV Agusta Brutale 800 offers for its ergonomics uneventful – and that’s a compliment! – With handlebars / saddle triangle / footrest rather natural. Alas, the saddle as slim as strike closes the table and would almost pass the saddle of the Ducati club chair!

A Brutale Soon as Soft as a Triumph!

Static, we find that the Ducati is really longer 100 mm longer than the MV. And maneuvering, and with 17 kilos also supplement air esnécessitent over arms surprising given the usual lightweight motorcycles from Bologna.

However, getting started is easy, with soft controls and a fairly smooth engine, provided it is in temperature. The Monster 821 shines better than his ancestors, and easily guide in congestion. Still at the good points, the suspensions are almost fluffy. As against the exhaust manifold heats the right leg.

In the end, the biggest surprise comes from the MV Agusta Brutale 800 Admittedly, the saddle between oak and pine suspensions (5 mm travel less than the Ducati and a firmer hydraulic), nothing should ask on the pavement. But that progress engine side! 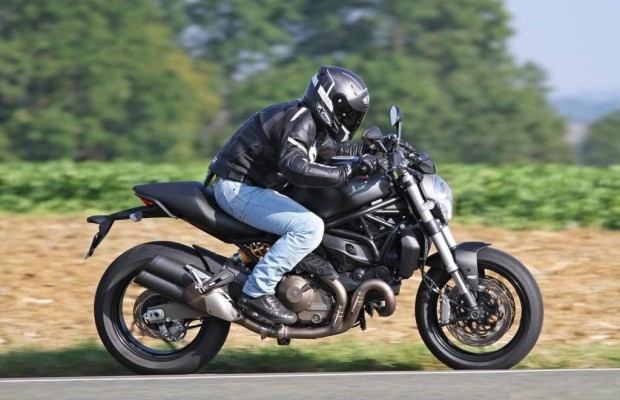 The latest electronic updates have made it rounder, softer and have erased the jerks as the phenomenon of timing. In use, it gets to 60 km / h in sixth without flinching when it boiling three cylinders is best known for its use in the whip!

In short, for life, if the MV Agusta has increased considerably, Agusta does not participate with this newest generation of Monster hosting a traveler with decorum. Straw Bolognese sauce sends

Once the channels are widening thins and the traffic, the Ducati respires intensely. The torque curves and rough enough power as L-twin, offers its share of thrills. A hollow hair down, he growls ferociously before drawing heavily on the arm in the midrange.

Its acceleration is melodious, like its deceleration filled with crackling cavernous exhaust. And if he cannot compete with the draw of a 3-cylinder, it is not lazy at the top. The performance is there and they are really full of flavor. Bravissimo!

Besides, with such a healthy, we expect the MV Agusta at the turn when testing times. But the Brutale 800 has just won by knockout. Times to 80 km/h or 110 km/h in sixth as the fourth, the MV immediately takes off. 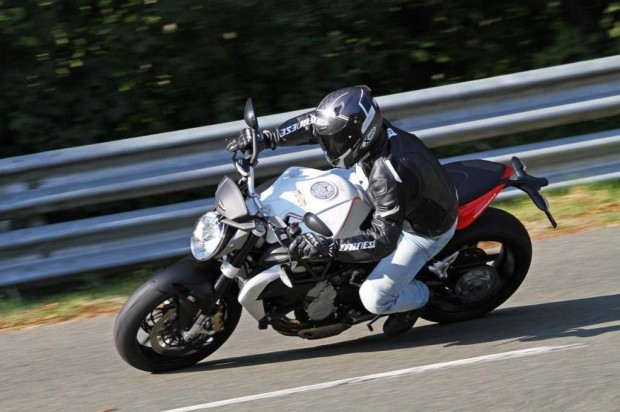 Side acceleration, the verdict is final, even if the MV Agusta our test was only slightly restrained, underline it. And the shifter Brutale version EAS spice large accelerations, before offloading to pass the wheel. Station also on your license if you play shift gears thoroughly without cutting: the speeds reached quickly become unmentionable.

Surgical, the Brutale 800 requires the expertise

The very sporty temperament of the MV Agusta Brutale 800 is not limited to the furious flights of its three inline. Its chassis is equally important. Attempting to pass several background reports on a bumpy county, Mehdi says to me, “must be dealt with the Brutale. I’m pushing on the handlebars to keep my path! “.

As surgical as it is in the winding, and much more accurate in these conditions as Ducati, MV Agusta needs the fine coatings to thrive. We had already glimpsed during our comparison on the track, where she had been very at ease stiffness flawless, put on the fast corner and a block, impeccable rigor of the front to aim point rope … surprising for this finally undressed F3. 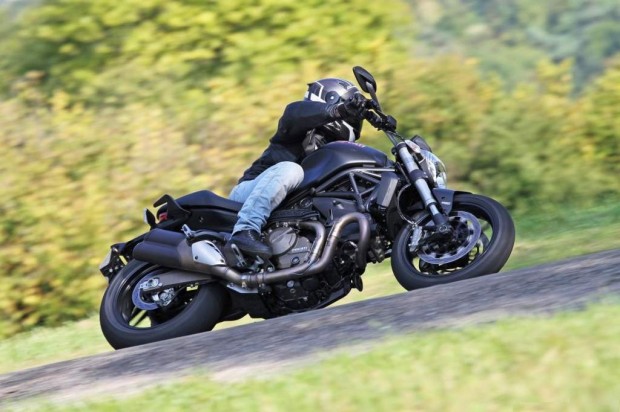 The Ducati Monster 821 absorbs much better inequality, providing more driving comfort, but his behavior lacks rigor. First, it requires not a lot of authority to achieve the same angle as the MV taken. She seems to tilt in two stages, with a heavy rear axle. Its weight distribution is also on the back.

Once on the angle, it appears quite stable, but its geometry does not facilitate steering. Dents discussed cornering dryly transcribed to the grindstone without altering the directional stability provided. When braking on the corner, the Monster 821 is seeking to recover, much more than the MV Agusta in one place.

In short, if our two Italian prefer good coatings, the MV Agusta shows himself as slick as accurate as the Ducati request of the individual or a smooth driving engagement. 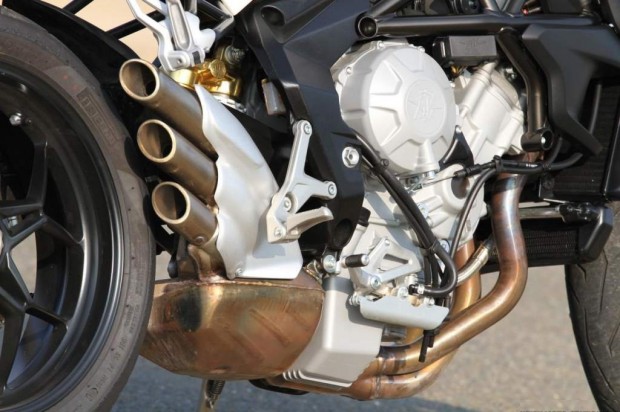 Even improved, the Ducati Monster 821 actually shows exhilarating to drive. Between ergonomics that suggest they adopt its curves and the vitality of its twin, it makes you want to ride. And developments, it allows a decent battery life for a Monster: 200 km with at least one full.

The security offered by the Ducati Safety Pack ABS plus traction control as standard and the good reception given to passenger ultimately make more welcoming this new generation Monster everyday as its predecessors, also lighter and sharper chassis. What succeed in the face over the MV Agusta.

Sold at US$13214 the Dark version with “upper middle displacement.” the Monster 821 is one of the more expensive roadsters. However it is at rest extra reasonably priced than MV Agusta Brutale 800 (US$ 13755), which is full of EAS equipment ABS version (US$ 15018).

Significantly better in sports use, the MV Agusta has significantly increased motor side (softer injection plus side finishing treatment) and shows that the small manufacturer Varese puts double overtime to put his motorcycle upgraded. Most successful, the Brutale 800 remains a motorcycle expert, appreciating in good conditions.

I hope you enjoyed to know about the Ducati Monster 821 vs MV Agusta Brutale 800 comparison test.

Let me know about your views regarding this test in bellow. 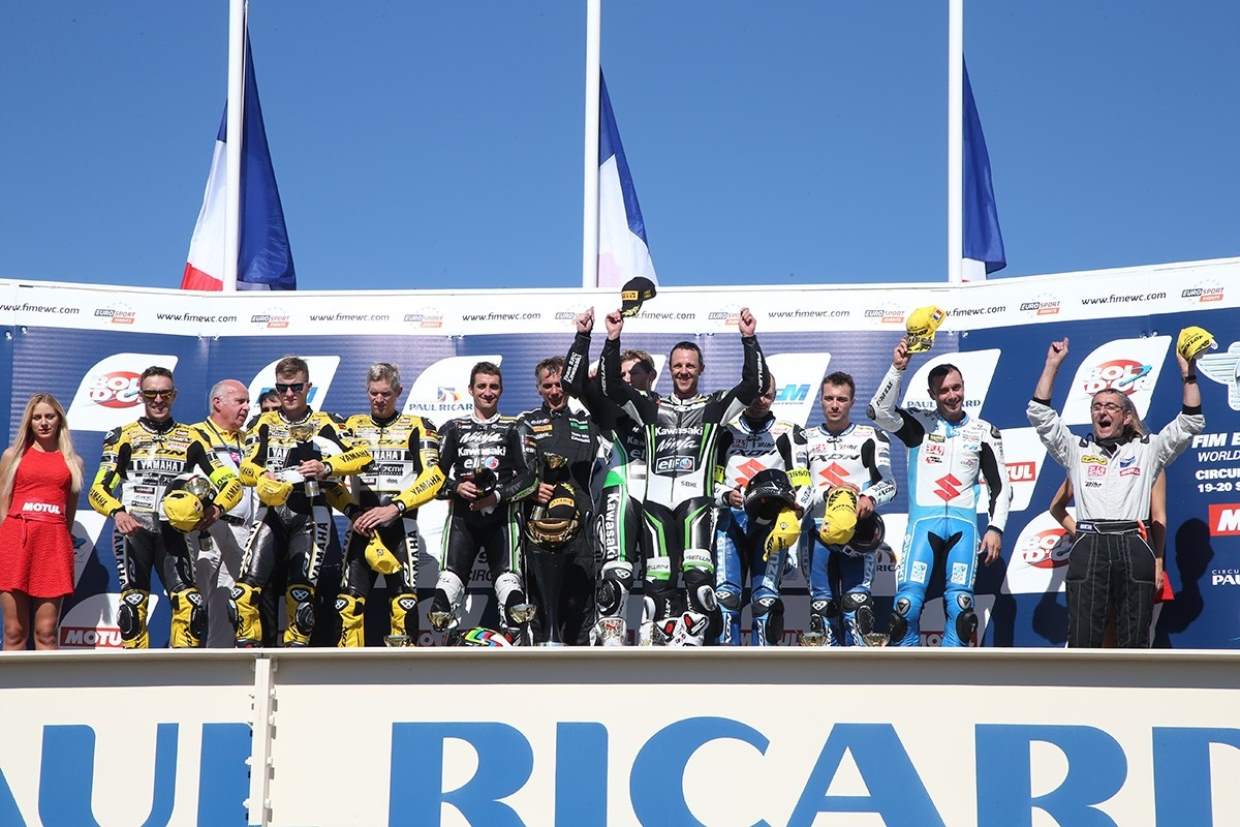 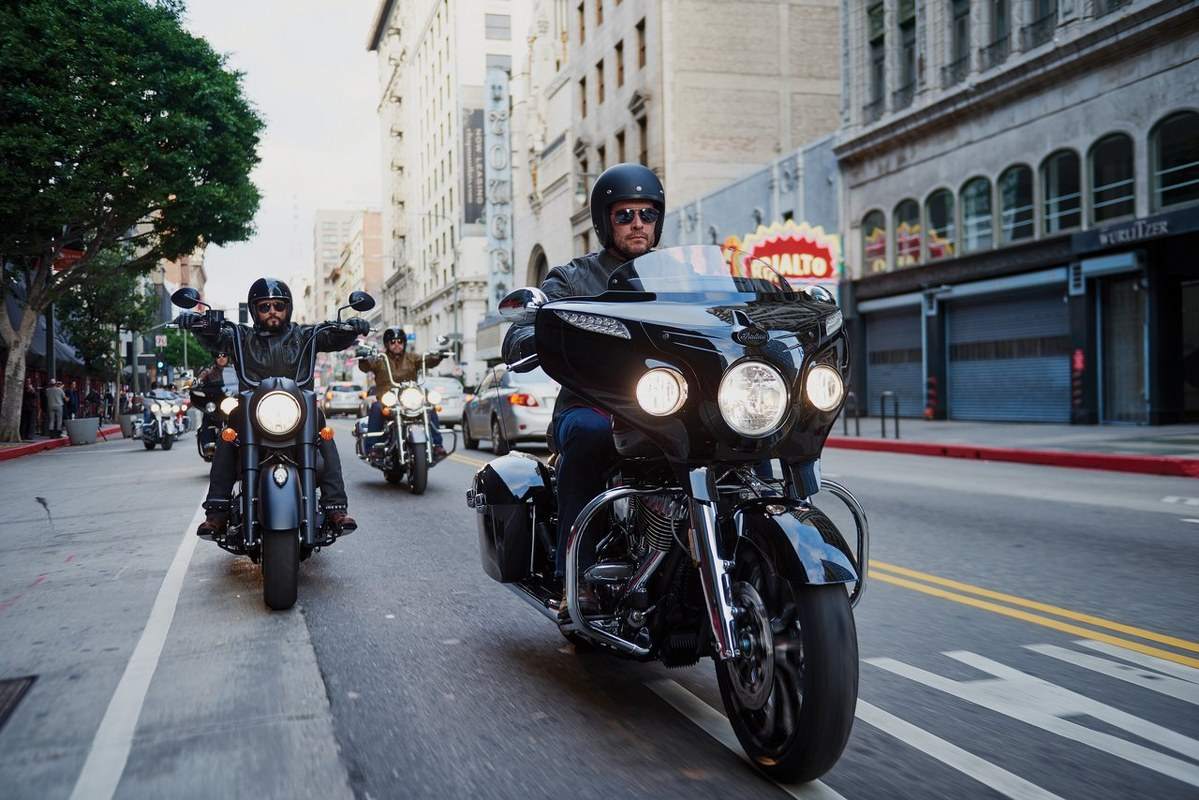 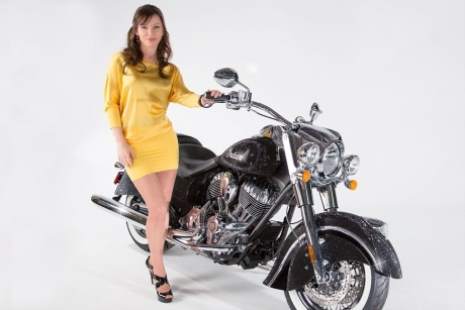 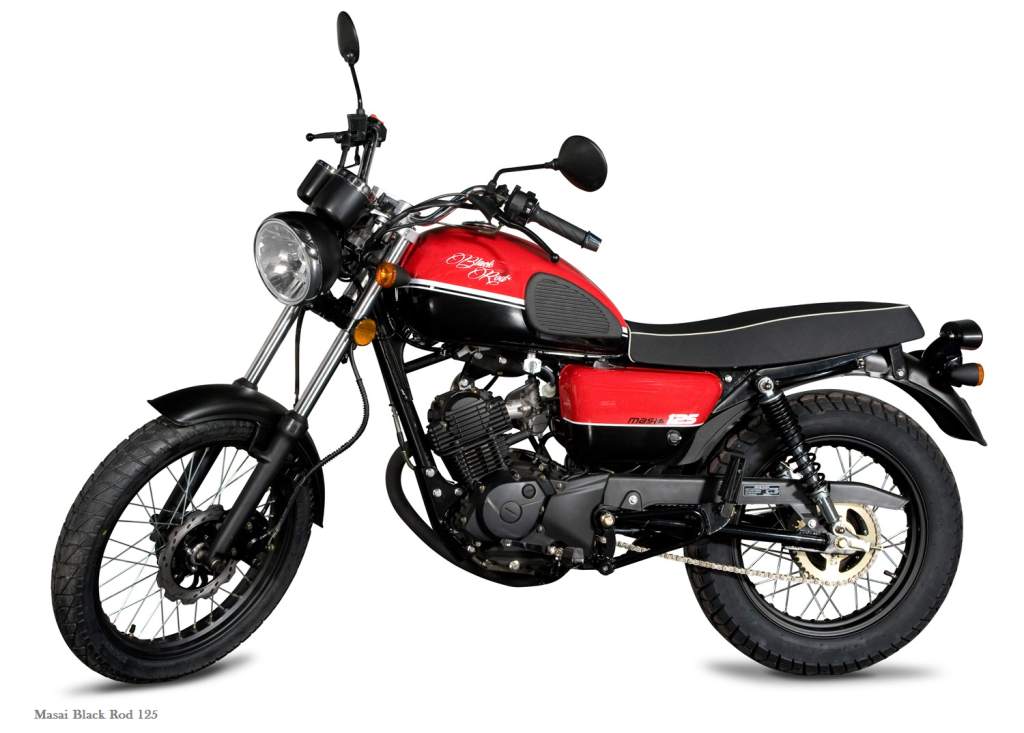