With this new 390 RC, KTM intends to open the world of motorcycle sport in greater numbers, beginners and or fans of the genre, with 44 hp. Insufficient to trigger the passion? Our answer is under! 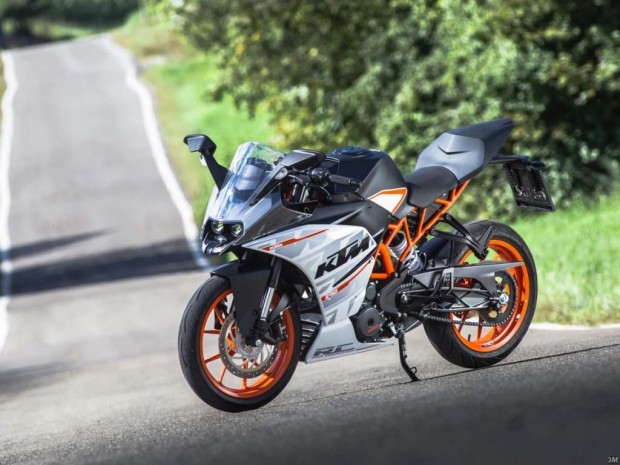 A single cylinder 375 cm3, 44 horses to the best of the power curve, these are figures that are, in principle, little dreaming on paper. Especially if they concern a new family sport. But by opposing the reduced weight of 147 kg dry and a cheap price of US$ 7608, the case becomes much more engaging. That at least is the equation on which the last generation Austrian manufacturer KTM is based.

Production absolutely not trivial, since as they say out loud the brand, it relies on the novelty, to develop a pool of customers among other new markets such as Brazil and China. By bringing all the documents produced by Bajaj in India and assembling all in recently locally based factories, KTM can lower its costs no import tax, labor cheaper work while maintaining premium prices consistent with the policy of the brand. Bajaj continues to turn to produce the KTM for Europe.

Vacation period helping, I begin my first try this autumn 2014 the KTM RC 390, while my mind is still fresh test of CR 125 Knowingly, I see a direct parallel. Templates are neighbors, the build quality is only slightly better on the “big little” 390 RC white dress fairing gives it more pep. Ergonomics is also identical and that’s good. We find a moderately high saddle 820 mm, footrests not too high that leave enough legs unfolded and set handlebars bracelets generating little support. 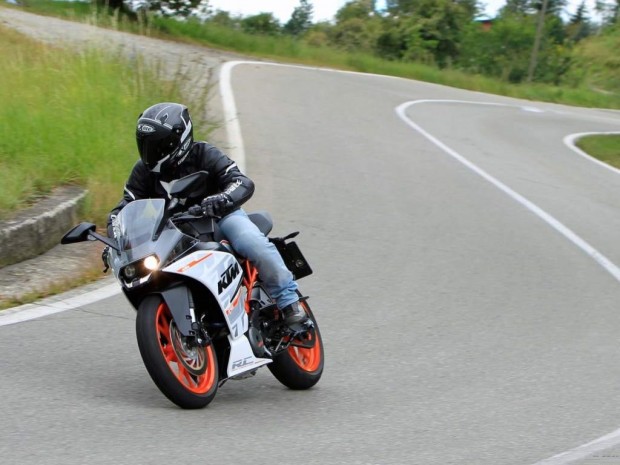 Ultimately, we are quite close to the position of a roadster even more convenience in the Kawasaki Ninja 300, its natural rival. At startup, the drum gives off a more rewarding than the more serious tone 125 RC, fuller, we already guessed the elevation of performance. Certainly, some enduros sound better, but KTM has mainly tried to make his block everything there was more in line with the traffic regulations.

And it is little more than a few hundred meters to identify the potential of the engine, which obviously has nothing to do with the single cylinder 125 RC Here, despite its modest displacement in absolute performance are appointment accelerations and strong enough times just fine, no doubt helped by good weight content of the 390 RC engine accreditation course recalls that of the Duke 390, and for good reason, it’s the same!

Moderately flexible, common usage, the drum does not like to go below 3500 or 4000 rev/min. He then reveals a pretty filling, enough to provide routine journeys safely when overtaking. Serious things truly begin at 5500 rev/min, with an increase in speed and sharper more nervousness. This return to form continues crescendo to 9500 rev/min, before the needle of the rev counter does street in the red zone! 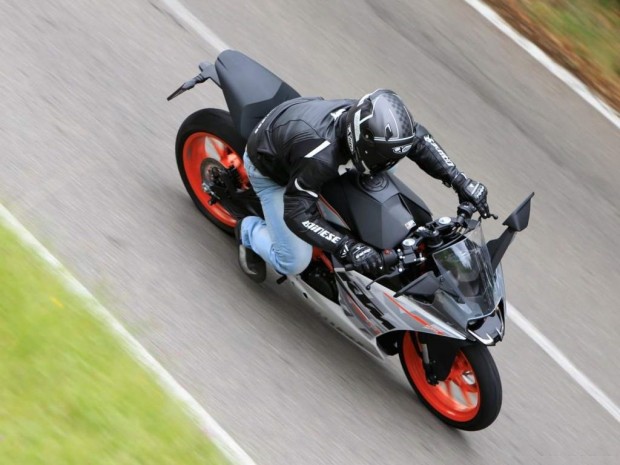 No doubt there are 44 horses, the pulling sensation on the arms gives a smile! Certainly if you’re a regular high-speed bikes, pushing you probably will seem a bit thin, but the performance and character are certainly waiting for you. KTM RC 390 is a true fact middleweight, not a 125 doped.

Therefore, motorway journeys have nothing of a chore for the small mono. At 130 km / h counter, he turns to 7000 rev/min and supports exercise without flinching. But it is 120 km / h cruise that is more pleasant, less vibrant and this time very reasonably, and also less giving the sensation of force. However, we are dealing with has a real sports: 177 km/h meter peak are reached rather easily. If comparison, the extension of the parallel twin Ninja 300 will be put to the test. 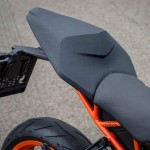 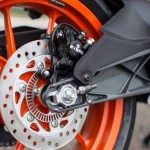 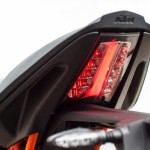 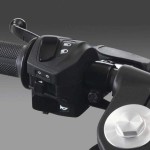 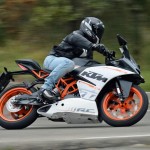 Small defects common to the RC 125, also indicate the passage: the saddle KTM RC 390 shows too strong, especially in the cruising even when the position is maintained during hours. The vibrations are substantially more present on the left side of the bike and mirrors, form the least original, are ineffective.

Through villages in the region of Maranello, home of automaker Prancing Horse unveils the excellent maneuverability of the 390 RC, which shines very well for sports. But if the judgments persist, engine heat is heat left calf. Selection, fairly sweet, is not completely accurate to the passage of the second, perhaps due to lack of miles from our test bikes 750 km on the clock? 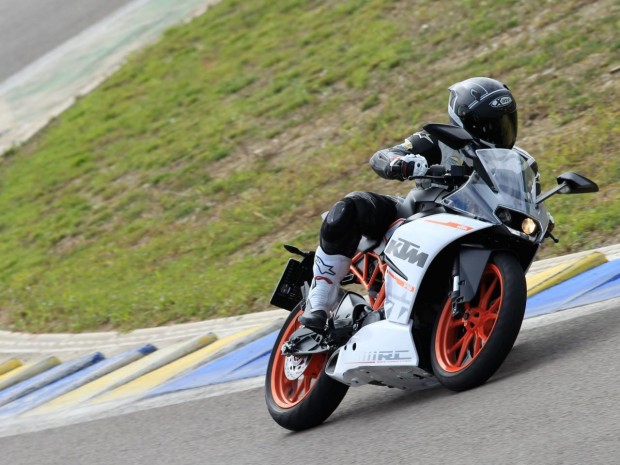 Nevertheless, in spite of minor drawbacks, the KTM RC 390 should not be marked without problems of everyday work.

The winding roads of Emilia Romagna quickly take on the appearance of the playground. Very agile with its 147 kg dry, the KTM RC 390 plays with tight turns and other pins. Directional stability on the good coatings proved superior to that of the RC 125 while emphasizing almost “relax” does not prevent a sporty driving, as we later confirmed the test session on the track.

Taking on board the early morning, the flexibility of the suspensions had surprised us, especially the KTM RC 390 will experience in a lifetime sport mini bulkier than mine (70 kg dry) templates. However, to use on bad roads paved, non-adjustable suspensions these except the preload on the rear does not fare so badly. They really bunched on larger shocks and maintain behavior. 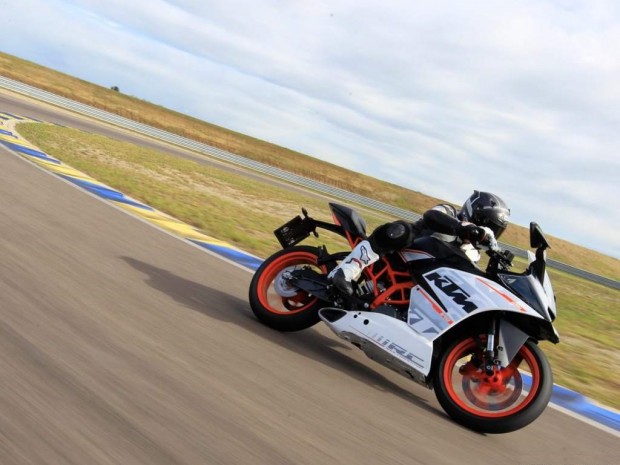 The engine, full of energy at half speed, allows beautiful reminders out of corners. Even driving sportingly, we never reached “stratospheric” speeds, enough to preserve the license points. In short, if happiness is not complete, we approach still closely with the 390 RC.

The circuit of Modena welcomes us to the final part of the test, tailored to our bike of the day, neither too small nor too large (mostly). And what developed through Modena, the 390 RC us well and truly enjoyed: formidable agility, pep engine between 7000 rev/min and 9500 r/min, speed of transmission, also well staged this path, and an overall accuracy which allows to dare all trajectories.

What more? The air rises Series Metzeler Sportec M5, unflappable on the road, proved enough on the track after a good warm-up lap. Moreover, as the power is moderate and the bike still shows healthy, we allow little fantasies: long braking on the corner, corner entries pushed outward to try new paths. So the test session between journalists took on the appearance of output karting with pals, imagining riding a Moto3! Healthy and easy control with minimal risk, fun. So fun besides that the first group of testers who preceded us will put five RC 390 to earth. 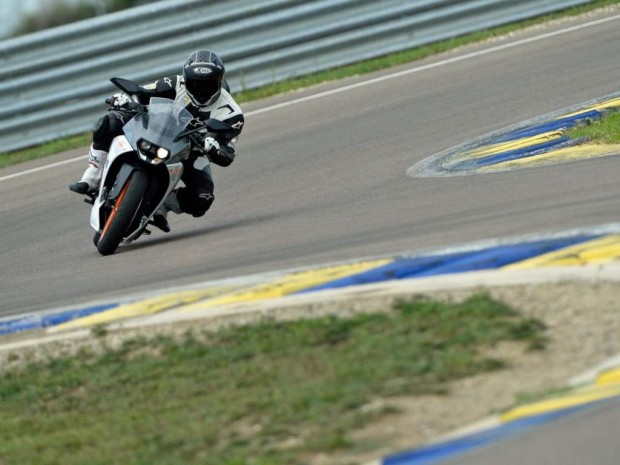 KTM had planned misbehavior and inventory of parts in advance. Finally, two kinks are somewhat spoil the party: the brake is missing constantly, consistency and endurance to leverage the laps; and ground clearances at the shoe, which can come lick the ground even before the footrest. Almost trifles under the pleasure it brings.

Intro To our question concerning the passion conveyed by these “open motorcycle”, our answer is “yes”, of course! For if the power remains limited, we really are dealing with a real sports, healthy, efficient, seriously designed and built. While his formidable 1290 Super Duke R is the current window Austrian manufacturer, the “minor” sports RC 390 is at least as strategic and more.

Officer to infiltrate among other emerging markets with large volumes to key, it has to popularize the brand to new consumers who tomorrow will also be the future. Assembly Bajaj KTM RC 125 as the Duke and 390 for Europe, the 390 RC should also enable the manufacturer to expand its market share with us. 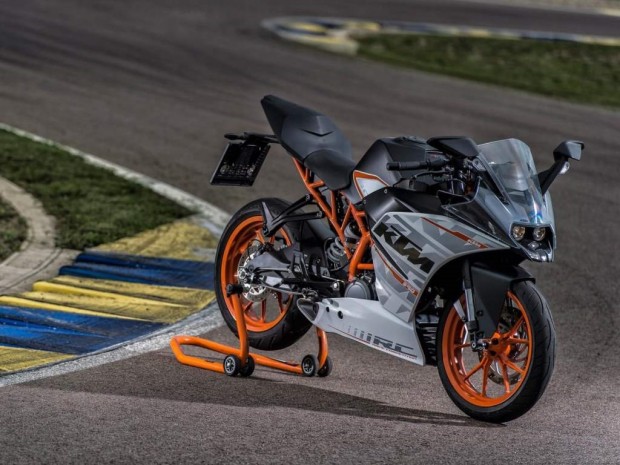 I hope you got some new and useful information about the KTM RC 390 Test for Moto 3.

Let me know your comments about this test in bellow.