Finally, we have to complete our first test of the famous Yamaha MT-09 2014! And the least we can say is that the (long) wait was worth it. On a completely new technology base, Yamaha returns to the front of the stage with great effect, especially a three-cylinder engine that has not finished to be heard. First Yamaha MT09 test inside! 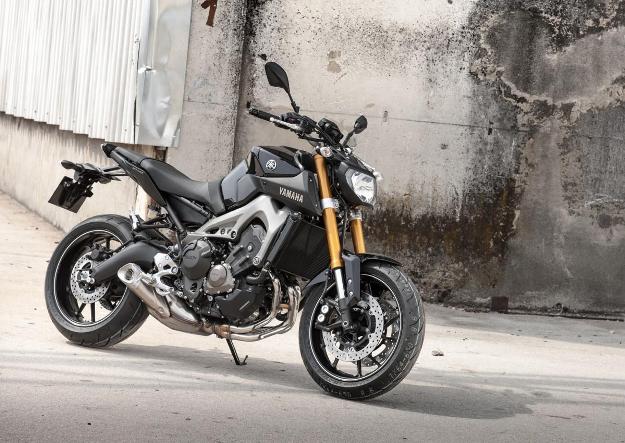 Attention, this new Yamaha 2014 has what upset the market. Yamaha MT-09 is certainly what make’s distributors were waiting: Finally a ‘real’ novelty motorcycle that will offer them better days and especially, offer bikers a unique cocktail, explosive… and can be used almost everywhere and all the time: new engine 3-cylinder engine, new chassis, eventually very studied philosophy. Yamaha MT-09 made a sensational entrance on stage at motorbikes multipurpose public, the character bonus! Here’s why. 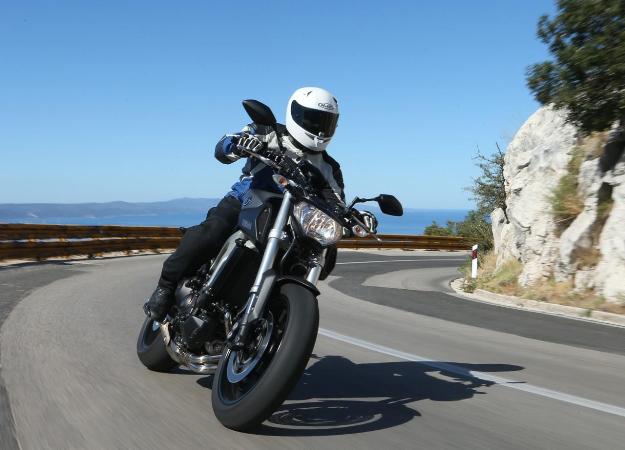 When the function dictates another form

Most roadsters, more or less energetic, the average superior engine capacity (600 cm3), are all about the same line, an aggressive front and rear often very tough to return the favor. Instead, the new Yamaha MT-09 is already distinguished by its more slender lines and a minimalist if it is to ask whether the engineers have not forgotten parts along the way, such as trim around meter.

Special a priori, just like the ergonomics of this Yamaha MT-09 2014 also unpublished, with its perched high handlebars, low seat height, more thinking in a trail as a roadster, a first visual impression that occurs once on board. 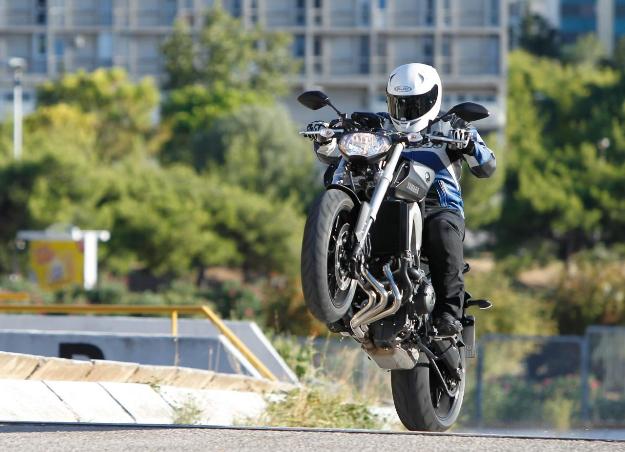 The saddle has beautiful perched at 815 mm from the ground (or rather high), the narrowness of the bike – remarkably worked in the crotch – allows to put both feet almost flat on the ground as we measure at least 1.70 m. by pitching the Yamaha around the equilibrium point, can only observe its lightness announced at 188 kg all full facts.

The environment is stripped and relaxing ergonomics, with high handlebars but less (overly) large on some roadsters. The footrests are placed back and low enough to unfold the legs of average dimensions, but bikers exceeding 1.85 m will probably slightly more cramped from this point of view aboard the MT-09. 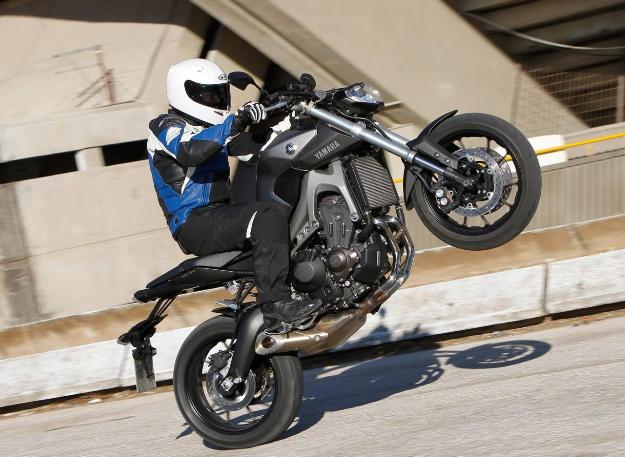 The time to get acquainted with the new handlebar control Kit, including the emergency stop rocker / starter, three-cylinder 847 cc comes to life. The sound of the Yamaha MT-09 is original: a growl of R6 at low revs, then a very typed climb three-cylinder online, without the metal side and the shriek of primary transmission of the Triumph, or the roughness of the Italian MV Agusta Benelli.

In short, this is a new three-cylinder engine that has its own musicality! Yamaha out of the lot, even if the altimeter says Cross Plane (especially by the shift of the ignition more than the 120 ° crankshaft timing) is not really perceived to the ear.

The first meters, lightness exacerbated the Yamaha Mt-09 added to its natural ergonomics, greatly facilitate his hands taking. Although the bike turns well, some medium-sized cars are better. Also, the gear selection is good… for a Yamaha, has already seen more creamy gearboxes elsewhere. 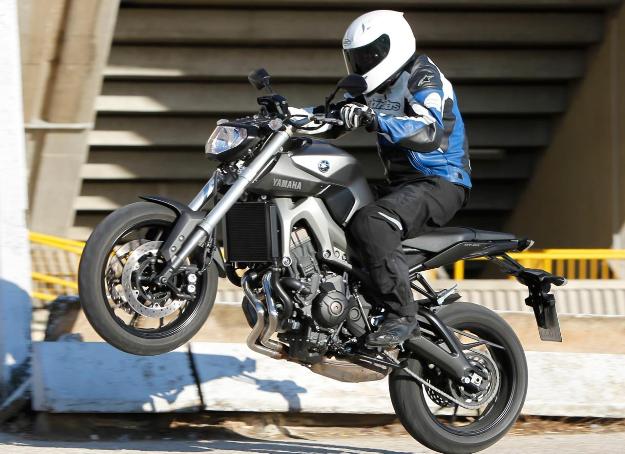 At that time the first test of the Yamaha MT-09 2014, the generalist philosophy of its constructor is reflected through each detail and sensation: the Yamaha MT-09 and its engine three-cylinders are easier to apprehend that a furious MV Agusta brutal 800 for example.

But from the first rotations of electronic throttle (ride by wire), the ultra torque (8.3 daN.m or 8.9 mkg) already shows all its strength! And this is one of the outstanding qualities of this new Yamaha MT-09: a very demonstrative response to low and substantial, which gives it, covers guns, not to say record in the category. Honestly, sensations offered between 2500 rpm and 5000 rpm closer the MT-09 of a Triumph Speed Triple 1050, neither more nor less! And, at the outset, it is this exuberant character of the new three-cylinder Yamaha which marked the spirits. 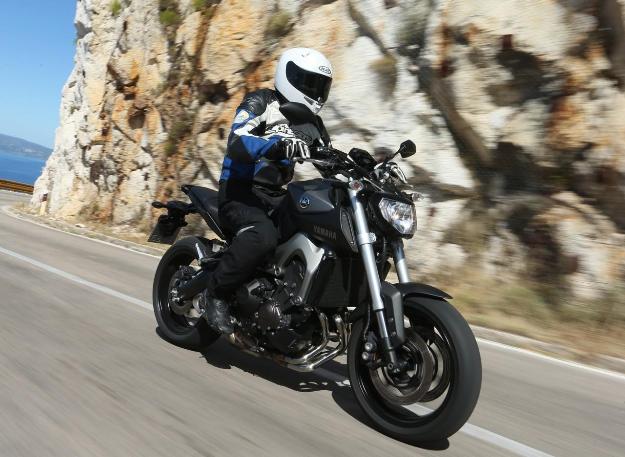 Ultra horsepower, this engine remains very smooth and flexible, since it is possible to go down in sixth at 1 500 rpm (approx. 45 mph) and to leave then on the same report with a remarkable, worthy force – at least in sensations but we will check chrono hands and on the engine bench – with a higher displacement. In addition, ‘turning the handle’, there subsequently sufficient extension of block MT-09, which spent 5 500 rpm leads his crew with an efficient linearity to the end of its useful RPM range. While some competing three-cylinder will show more explosives while high, Yamaha chose booster more low and medium schemes, which is undoubtedly more relevant in everyday use. Overshoots in duo will be a formality.

With the Yamaha MT-09, found the pleasure of getting caught by a really unique character-driven, as the first Triumph Street Triple 675 at its output, but in a body builder for the Japanese version. Nevertheless, for the first 50 miles, we encountered difficulties into now a trickle of gas, which generated a significant blow. The ride pace suffered somewhat and change mapping mode (standard, A or B) did not change almost nothing. The side chains of transmission were, it is true, very tense and the throttle had no game later with the miles, the phenomenon became less sensitive. 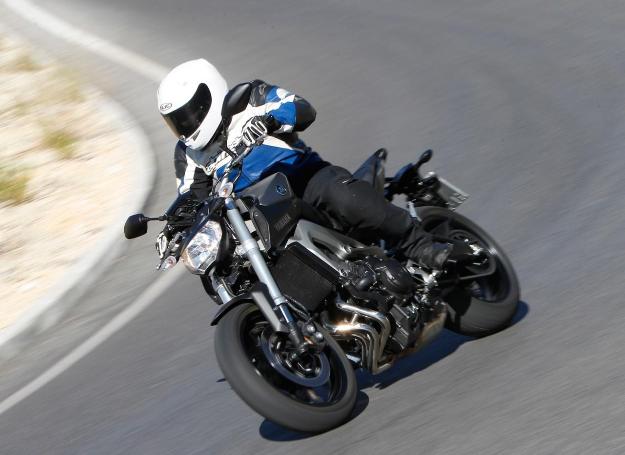 Similarly, the braking seemed to be also too brutal to the seizure of the lever, with a fork dive a little rough in the city or between two turns for example. But more than these slight imperfections – not to say trifles – it’s mostly random membership of Croatian roads which will have given us trouble.

The first few kilometers, the evasions of the rear wheel brought more heat to driver 30 ° ambient … Fortunately; some portions of bitumen more consistent with our French standards have enabled us to force the pace as expected. And under these conditions, the Yamaha MT-09 reveals, once again, a singular character. 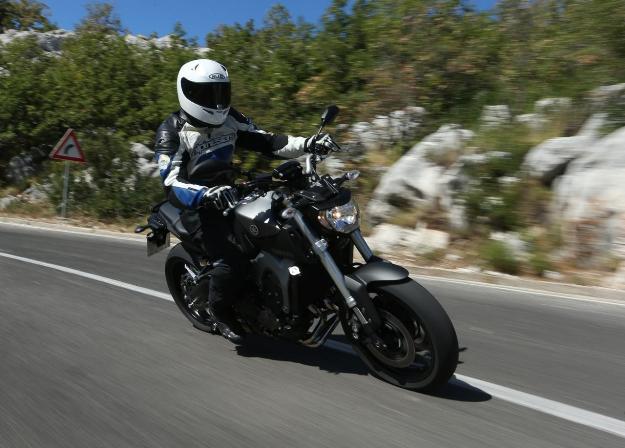 Agile, the bike actually plays small curves. The flying at the handlebar is a regal; Yamaha MT-09 is very easily placed into turns to the usual paces. Then praise the work carried out by the manufacturer to lower the center of gravity (engine tilted and lowered, frame designed for this purpose). Ergonomics, at halfway between roadster and trail, does despite all not want to fly the new Yamaha way Supermoto with the output leg…

In addition, his saddle, wide at the rear and slightly sloping, does not facilitate the task when you want to retreat a more sporty posture; it is also the case of the KTM 690 Duke on which one must fly online. Other approximation with the Austrian; the suspension travel and their flexibility start of the race. If well they bring a real comfort on the small shocks, either a true more on bumpy roads or the motorcycle therefore allows keeping the pace in any security. 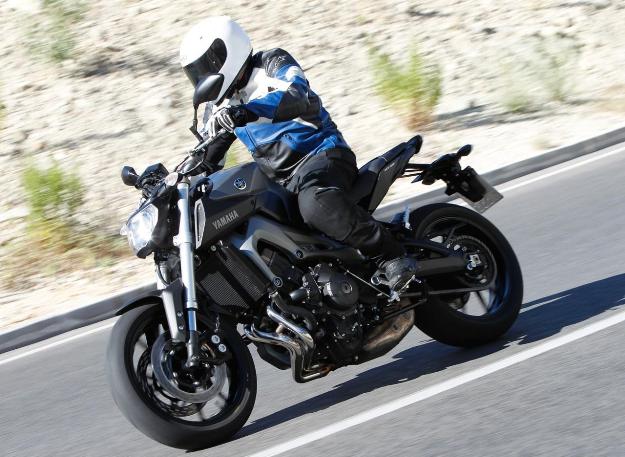 Unprecedented versatility in the three-cylinder

Of course, in the rare fast, twisty and well coated portions, we found some moves on the big support. Triumph Street Triple 675 seems to us, in the spirit, the more rigid and stable (to be confirmed by comparison) that Yamaha MT-09. This behavior can also be of a more general attitude switched to the back of the Japanese, who ‘did sit’ more as soon as we take the speed.

It remains that on this test site (from dream) between mountain villages, sleepers in the not, damaged roads and edges of sea dotted with large waves, the Yamaha MT-09 unveiled many talents. His general comfort – saddle, ergonomics, and suspensions – we will have preserved the usual aches on the some 300 km of road traveled for this first test.

Under these conditions, the bike has never shown to unsuitability, allowing choice paced ride through an engine that can stay all the time in sixth and autonomy close to 190 miles before reserve, a rolled-up rhythm / fast thanks to a high agility and good connections to the ground, possibly a dose of fun with his amazing penchant for wheels rear… With the MT-09, Yamaha offers us a real motorcycle ‘multi map’, and whose design oriented ‘platform’ begat facilitate future versions (two variants based on the MT-09 would be scheduled for the coming year). 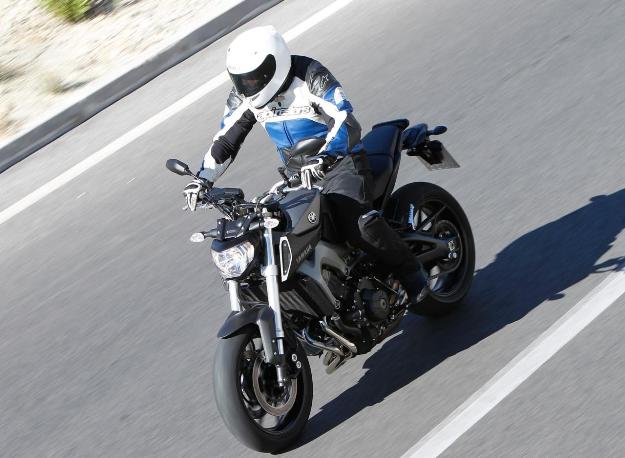 Hard not to get excited about the end of the first road test of the Yamaha MT-09 2014, which raises many doubts and says here an impressive potential. On an entirely new basis, the manufacturer serves up a 3-cylinder full of character and amenity, an agile chassis, easy to understand and with a more comfortable and versatile than many potentially competing roadsters geometry.