In the life of a biker, there are events that mark. This can be receiving the first bike bought new, a motorcycle trip, meeting the love of his life on top of a mountain pass. This happened to me this spring is one of those moments emotionally. When the importer told me that Triumph Speed ​​Triple R was available in the park press, you can imagine the excitement that came over me. In the area of exclusive, we can arrange some of the current production bikes; Speed ​​Triple R is one. 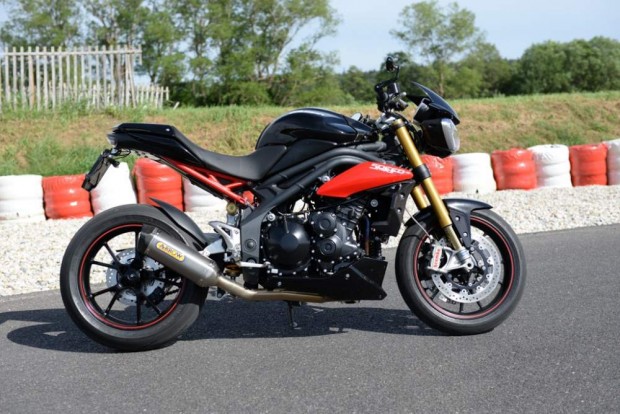 This season, 2014, the importer Triumph has equipped her in a slew of accessories, which is rare. The original purpose of importing is to present to the press a “basic” motorcycle in her nude. This bike is called basic one that the customer will choose in the catalog; accessories are a personal matter led tastes. Only this Speed ​​Triple R has the distinction of having been “accessorized” with taste. Originally, this Speed ​​in its radical version “R” has parts racing prime as a fork and Ohlins damper NIX30 TTX30, both adjustable in all directions.

The brakes, Triumph naturally trust Brembo monoblock calipers with specific “R”. These would add, as Triumph engineers gain stopping power at 5% and that’s not all, from an aesthetic point of view, the Speed ​​Triple R adopts fairing elements carbon, radiator scoops and a rear frame loop dyed bright red, a shoe-engine, a jump windbreaker.

The list seems long, yet goes with the options he has grafted the importer. As shown in the photos in this article, our Speed ​​Triple R is silent on the passenger pegs and adorns the most beautiful accessories Triumph: ultrathin LED flashing, bright LED tail light, small mirrors to bar ends , jars brake fluid and clutch aluminum. Only the plate holder is assigned to Rhizome. Finally, we assign the small prank restrictive laws of our beautiful Helvetia in the exhaust line 3-in-1 Italian manufacturer of Arrow. Unfortunately not for street use, it obviously brings a unique look to the Speed ​​Triple R, let alone singing it provides. I will discuss later, I promise.

The confrontation with the little sister Street Triple R is inevitable. Many people are torn between these two cars before buying. Both powered by a three-cylinder engine architecture true to Triumph, one opts for the 675cc and one for 1050cc. Two engines sporty! The engine of the Speed ​​Triple R, the 1050cc has a passion and a desire longer than the competition. Triumph has been able, over time, improve the modern technologies. It now delivers no less than 135cv to 9’400tr / min and 111Nm at 7’750tr / min!

The aesthetic side, we clearly see the difference between the two sisters, although the family membership is very marked. One appears as small turbulent ready to slip with ease thanks to its tapered silhouette, the other is the big plays with his arm wrestler’s shoulders. The aesthetic appearance is confirmed on the scale, 186kg against 168kg! The Speed ​​Triple R seems to set an example for the Street Triple R, advancing its elements Ohlins suspension and Brembo brakes ressortants brilliantly on the black bordered carbon and peak red shroud. The Street Triple R, she is content with KYB suspension, also adjustable in all directions, and brake Nissin monoblock calipers and radial location (Brembo rear). 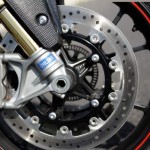 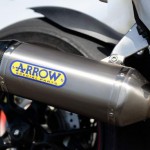 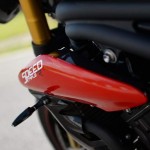 The vocation of the two Triple R is identical to the paper; the quest for a lap on the track and max ‘fun on the open road. Saddle up, it’s confirmed, but the sensations are all different! When the Street Triple R makes you flirt with the relegation zone and attack knife between his teeth, the Speed ​​Triple R, it rather offers a driving while muscle by using this torque at low revs. The force of the Street Triple R has no equal! It plays its weight content twirl a turn to the other. The Speed ​​Triple R provides thanks to its excellent chassis and the chassis top flight. Heavier, but no less sporty. However, she asked her driver to engage fully. Yet obeying the finger and the eye, the Speed ​​Triple R does not ease the little sister. 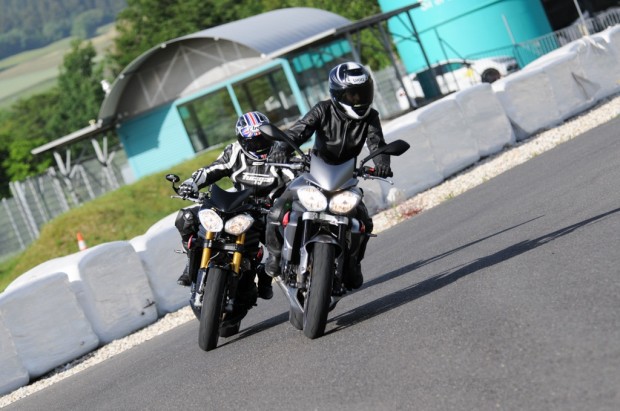 The Speed ​​Triple R is a work of art in itself. I look and I never tire of watching. I detail and I marvel. And when I start, I let myself be overwhelmed by the hum of its three-cylinder. Any rotation of the throttle flate my tympas. And when I start on winding roads, the Speed ​​Triple R reveals all its dynamic qualities. More so, I revel in uneambiance sound worthy of the best classical concerts … the trumpets are in the spotlight! Above 5’000tr / min, is ecstasy, line 3-in-1 Arrow comes in setting the tone with presence. And deceleration, I pray not to cross a pandora … so that the exhaust backfiring “silent” provide a racing atmosphere. Fortunately, at low speeds, this line shows Arrow as discreet as the original dual exhaust. Whew!

I especially liked the versatility of the Speed ​​Triple R, as well as the Street Triple R. With a wide and soft saddle, this is not your sitting posture will suffer long walks. All stalks fall perfectly under the fingers, making it easy city driving. Also, the clutch control is precisely dosed as well as the transmission control is accurate. The brakes are a progressive attack while presenting a formidable power for braking trapper. Gaffe braking on the corner! And finally, what are the wrists which will grimace after a few hundred miles; in effect, provides the Speed ​​its pilot in an inclined position before that involves wrists. In this regard, the Street bestows a more upright position and therefore more comfortable. 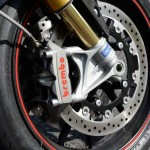 The Speed ​​Triple R, as the Street Triple R are predisposed to heavy track use and will not be ridiculous face middleweight supersport. It did not take me to pray for the sisters take on the legendary circuit LigniÃ¨res.

In the morning, I go (in English) at work. At noon, I went into town for a shared lunch with a friend biker. I am planning a trip to the Grisons for the next weekend. By late afternoon, I left work and make a detour to the Neuchâtel circuit before returning to my household gods.

The Speed ​​Triple R is a versatile machine, but also very endearing by his behavior, his mechanics and his look! Love at first sight. 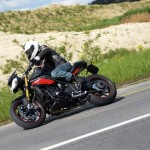 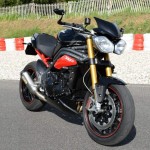 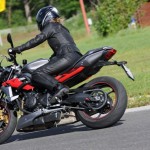 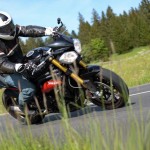 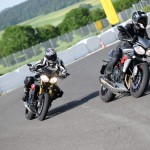 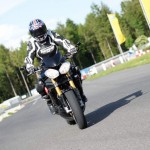 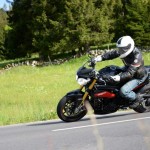 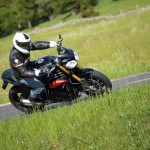 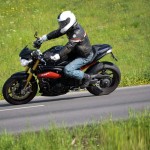 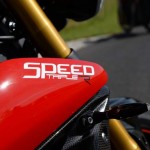 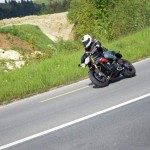 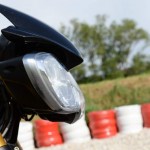 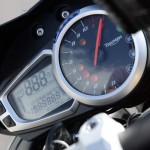 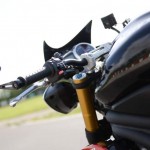