Previously represented by Victory Motorcycles, the motorcycle division of Polaris goupe has been enriched by a legendary name”Indian”. Already high five models, this new family of customs risk talking to her. Especially since the Indian Chief Classic, we have tried, seems particularly well-born.

Rarely, we had to answer so many questions, sometimes irrelevant, that during our test of the 2014 Indian Chief Classic “the bike how old? “Just six months dear sir ” Indian is a new brand that is owned by Harley-Davidson? “Ooh, not really . I’ll spare you the details of the clichés like” it’s a Harley engine? “Still lost. Or “Polaris is Canadian that” No, we speak at Bombardier Joual.

Following the acquisition of the Indian brand Polaris Group took the time to think, but very quickly decided to design a completely new motorcycle, with its own engine and its own chassis. For this, Polaris relied on the engineering team working for Victory.

Here a test video presented got from the french testing team:

The office of the style, he had little room for maneuver: the overall style was bound to recall the historic Indian. Legacy issue for a brand born in Springfield in 1901 – it was then called Hendee Manufacturing Company – two years ahead of Harley-Davidson.

Presentation side, it’s all good, with beautiful materials and generous proportions but judiciously distributed. Like a two-wheeled Candice Huffine, actually… 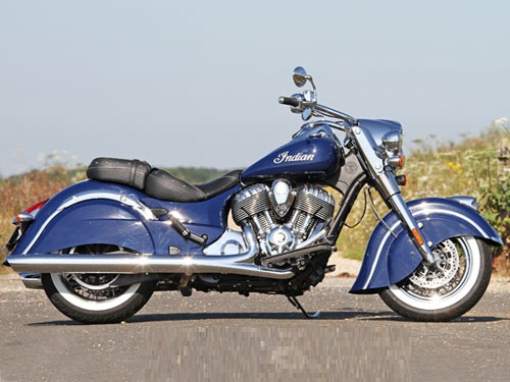 The Chief Classic allows some flirtations as keyless ignition via a button mounted on the tank. The awakening of the big twin, moreover, is amazing for frequent US customs: the starter takes time to launch big pistons, but thunderous explosion or marked tremor.

The engine quickly found its operating, low enough elsewhere: 800 r / min indicated by the tachometer LCD housed in the counter block. Sitting just 660 mm from the ground, I take orders. The handlebars are wide enough, handicap limit to perform a U-turn because of my limited scope.

However, usability is remarkable, with a relaxed position which will put up almost all sizes. The Indian Chief Classic knows how to entertain, let it be said! Fans of big cruisers find known as the air filter housing where the knee is wedged, left on Indian or very thick but eventually ergonomic levers, especially as it adjusts break lines by dial. 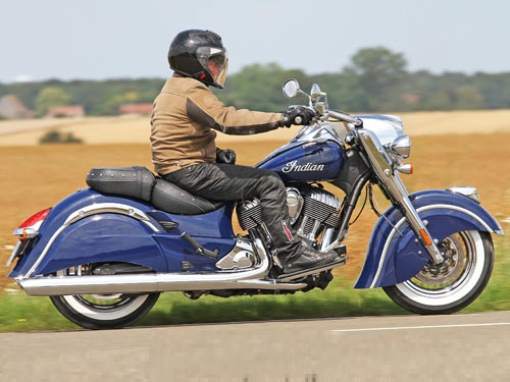 Chief Classic as Intimidating as Easy to Drive

With 370 kg fully fueled announced – and only 1 less on the scale Moto-Station – there was nothing to worry about for the grip. But the Indian Chief quickly reveals its modern design with ease of operation quite impressive compared to its size.

The first laps are obvious for a machine of this size. The first U-turns are made ​​without setting foot almost a formality! After a few kilometers, the character of Thunder Stroke 111 is revealed. The big twin-cylinder 1811 cm3 does not vibrate and emit a sound quite muffled in its original configuration.

Quickly, we see that appreciates only moderately ascents in brutal regime. So nothing to do with its predecessor, the Power Plus, which décoiffait acceleration, crisp on all sides to the exhaust, but not generate a lot of jerking and showing an uneven filling.

The Thunder Stroke, this is a 2-valve king who loves big wound on the torque between 1 500 r / min and 3 500 r / min maximum. In fact, just as with the Twin Cam 103 Harley-Davidson Softail, efforts to pass the six reports as quickly as possible before reaching 60 km / h.

The time then came to enjoy the flexibility of this engine and its torque so regular that conceal almost surreptitiously times quite remarkable, even unsuspected each rotation of the handle acceleration.

We can then indulge in the art of cruising “shoulder to the door,” with this great big engine that lends itself very well, showing a perfect roundness in its rev range, with no sudden or soubressaut the injection or the electronic throttle.

Vibration strongly attenuated by the balance will not be to everyone’s taste: acceleration at very low speeds do not trigger good vibrations, but the force of the engine on a simple rotation of the handle makes it very enjoyable ride. To make it alive, it will nevertheless be necessary to make the voice escapes: a benign but irreversible procedure, charged US$340.

This push devoid of brutality also highlights some of the mechanical inertia, which takes only gently towers. But strangely, it does not trap the torque of this engine. Firstly because the traction is excellent, and also because its expression, its ability to push you in the back, calls for a minimum of restraint. 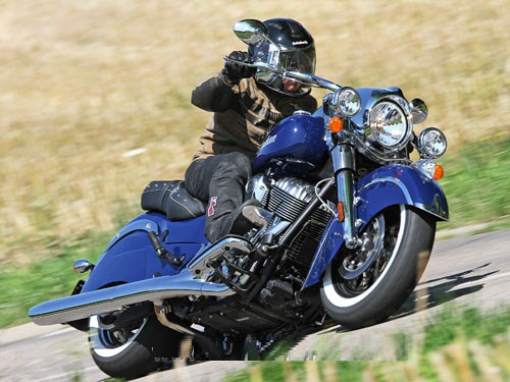 Intuitively, it is most often used on the half of the throttle opening. And if you open big, generous torque propels you ahead. More elastic and torque as Big Twins from Milwaukee, the V2 also provides a devilishly precise response to throttle opening.

By winding the county, the dynamic qualities of the Chief again betray its modernity. The handling is impeccable, with a very specific behavior finally reflecting respect to its retro look.

ABS braking starts to show its limits on emergency braking with evasive action. If a Chief Classic 369 kg can curb short, it slows down, however, very strong.

Depreciation also appears to have been treated with an agreement impeccable suspension and not the slightest wobble when changing path. Same ground clearance let’s start having fun!

Some power cruisers could take a leaf … the road potential of Indian Chieftain, to be quite suitable for our roads less straight as U.S. highways is then clearly imagine. 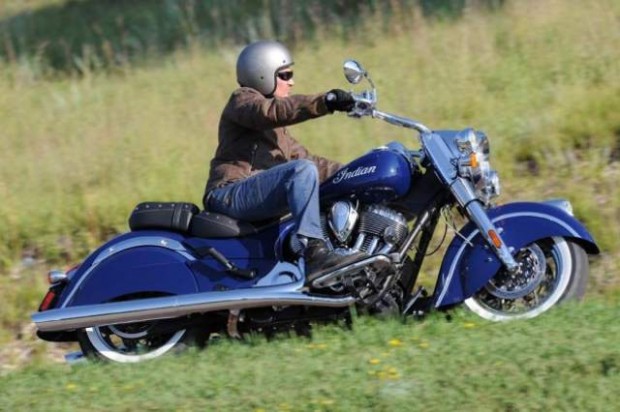 Conclusion of the Chief Test

The Indian Chief Classis creditable more than expectations: Polaris has not missed the resurrection of Indian: Obviously, the new range made ​​in Spirit Lake has received much attention of the American group. The technology used, the manufacturing level, the dynamic qualities and potential road very, very high in Chief makes a very credible alternative to the big Harley-Davidson.

The Indian Chief Classic was a bit reminiscent of a Twin Cam B mounted in a Victory chassis, suspensions with neighboring Japanese best productions. With such a cocktail, approval is really waiting for you and those who want more of manhood will turn to small accessories that give voice to the exhaust, and body to the airbox. No need, however, to boost performance Thunderstoke 111: they are already more than enough.

Sold US$ 31493 and with a guarantee of 5 years probably to reassure the skeptics, the Indian Chief Classic stands as a credible offer that about market – very – big cruisers with enough cards to attract a large number of fans of the genre.