Marc Marquez continued his record breaking 2014 season with a tenth straight MotoGP win on Sunday to equal the feat of Australian Mick Doohan in 1997.

The world champion has shown all-conquering on his Repsol Honda but was pushed by Yamaha pair of Jorge Lorenzo and Valentino Rossi, who occupied the other podium positions in Indianapolis.

Rossi briefly addressed before slipping to third place, but I saw the points become the first man to top 4,000 in MotoGP.

Marquez riding a Repsol Honda, completed 27 laps of 112.6 miles in 42 minutes and 7.041 seconds with 1.803 seconds ahead of compatriot Jorge Lorenzo-Yamaha.

Italian Valentino Rossi-Yamaha- was third 6.558 seconds, with the Spanish Dani Pedrosa Honda fourth in a race full of action that had several falls.

Marquez, 21, also increased his lead in the standings in 2014, collecting 25 points to improve to a perfect 250 points on the season.

Pedrosa is second with 161 points, with seven-time world champion Rossi nearly 157 points after 10 of 18 races.

Márquez started from pole but escaped slowly and quickly fell to fourth place as Rossi took the lead.

On lap six Rossi and Andrea Dovizioso seemed to have some contact in a corner, but remained upright, lost speed and Marquez took to pass them both and take the initiative.

However, Márquez tendered his time and took the lead again on lap 11, this time for good, gradually increased their margin to win in Indianapolis for the second consecutive year.

American rider Nicky Hayden, who lost the race due to injury, said Marquez was dominating the circuit that did everything right. 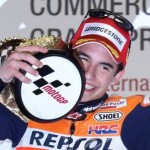 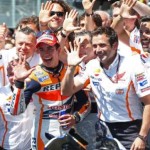 “Has it won races back, who has won races where it was not necessarily the fastest, it’s flag to flag, changed bikes, initiated from the network and … making it more I’ve probably seen anyone is both the edge and not make many mistakes. “