The Moto Guzzi V7 Stone with browsing in full retro current a simple motorcycle, almost a acclamation to the glorious past of Mandello del Lario. 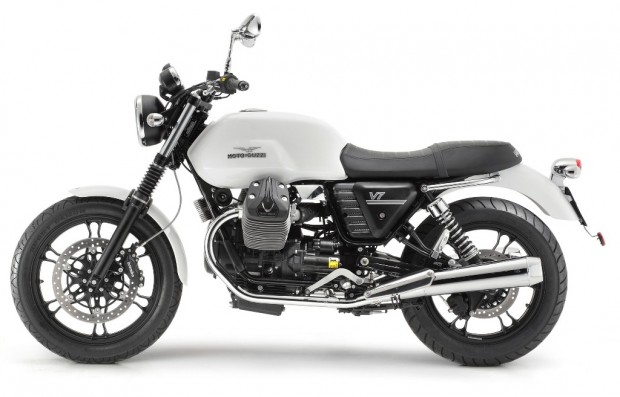 We took control of version 2014 which is undergoing some improvements without drawing a line on the character, far from it!

Sometimes, during a test, we can multiply photo shoots without anyone stops. Sometimes it is just the opposite because our bike day arouses interest, curiosity or just sympathy from passersby.

Exactly the case with the Moto Guzzi V7 Stone 2014

Lovers of fine engineering on highway areas, police motorcycles European fans, we were approached and Moto Guzzi V7 Detailed repeatedly Stone and we must recognize that it always look great, the small Guzzi. Even if it is less convenient and more rustic than the Breva 750ie, V7 breathe more passion. 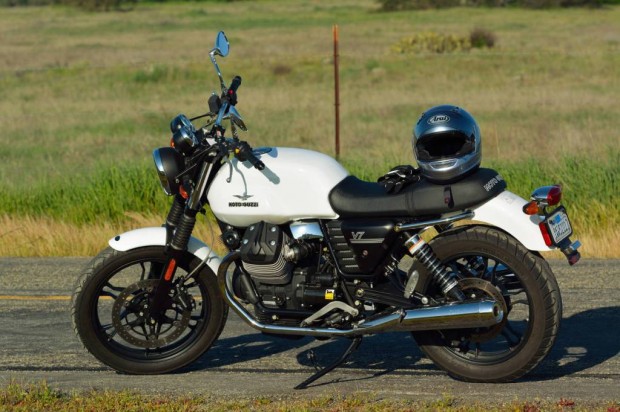 Form deliciously retro, chrome judiciously placed some metal accessories, matte painting on Stone or spoked wheels on Special the house designers have not failed and since 2013, they reviewed the finish to the net increase. The 2014 model benefits the passage a better connection hidden behind the lighthouse for example. Grip slightly up.

Moto Guzzi has changed some engine parts for two years (new cylinder heads, new alternator this year, ignition retouched) to improve the approval of the engine at startup and during the warm-up. These improvements were made in response to claims of owners of models from 2009 to 2011 that were operating too chaotic cold.

The new generation of Moto Guzzi V7 therefore wants more docile and steady. But this without him removes some traits that fully participate in his inimitable charm, let it be known! Kinematics startup V-twin facing the road, for example, remains a great time “guzzime” with the famous overturning moment which all motorcycle pitch from left to right ascension of each piston. 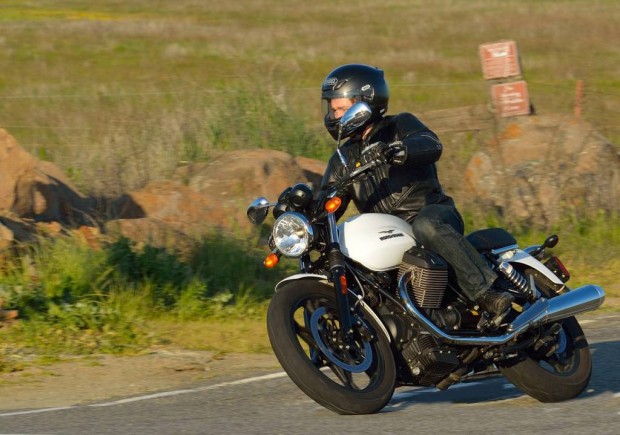 Admittedly, this unusual operation is not as sensitive to the modest V7 on a California of the old guard, who could stand on his back on a big blip! But it is still a small effect on the neophytes … Then, we appreciate the syncopated melody exhausts while vibrations invite commands.

It is time the box physical commitment

The seat height is the image of the template the motorcycle quite contained. Moto Guzzi has willed it so, to attract beginners as the fairer sex. Certainly inspired a sense of what practice Harley-Davidson Sportster with his family. With 1.70 m below the fathom, no worry to put both feet flat and once underway, the knees do not abut against the heads. Operates 201 kg fully fueled audited hardly demands physical commitment.

In contrast, the first kilometers book their surprises, regulars including modern mechanical. The gearbox is still long to heat up and the passage of the first reports is not really saving toes. Then some imprecision remains and shifting requires perfect break his ankle movement and whatever happens, the false neutral still lurks in the shadows slyly a final drive shaft and universal joint that is about it pretty quickly forget.

We discover the charm of this engine lives – the term is not too strong between 2 500 r / min and 5500 rev / min. Here it gives the best of him with a frank thrust and torque that takes valiantly Moto Guzzi V7 Stone apace. It is in this speed range, which corresponds to the appearance of between 45 km / h and 120 km / h, this vibrant and lively mechanics to be savored. 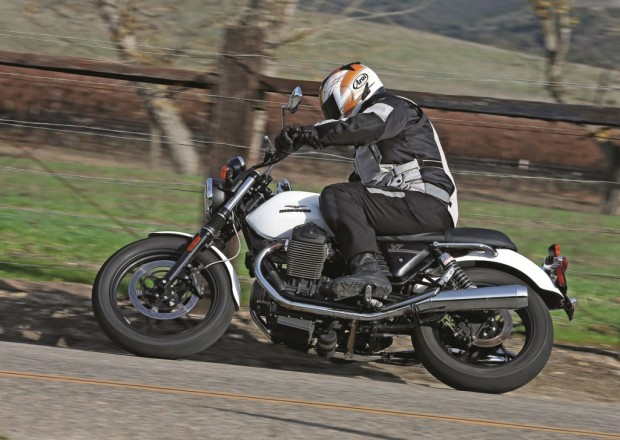 If necessary, it is possible to leave the third report down to 2000 rev / min using the maximum flexibility or extend acceleration fourth to 7000 rev / min for overtaking on the secondary network. The roar from the exhausts biplane then added to atypical sensations of mechanical architecture that is not less.

Often used in the city by its owners it seems, the Moto Guzzi V7 yet relishes road. Not too fast and wide still preferred. Certainly, holding cap on motorways is quite satisfactory, but the wind and the need to keep the engine running at 5000 rev / min (130 km / h in top gear) interfere with pleasure.

Better to roam the small county, playground where the Moto Guzzi V7 is expressed more brightly. It is true that his twin blooms there especially through changes offered cornering speed. However, setting the angle is not the most pleasant.

The bike lacks progressiveness tilt, and falls on the corner past a certain threshold, without actually managing to stall. Perhaps the Pirelli Sport Demon made ​​series … However, we appreciate the good agility in the winding, where the Moto Guzzi V7 Stone shows much more fun than a custom identical displacement. 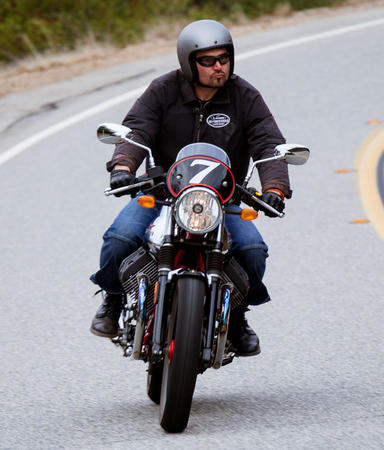 Suspensions do their job with a fork still providing better damping as the pair combined rear shocks. Driving comfort, thanks to a well-padded seat is nevertheless preserved. Devoid of ABS at the moment, hardly braking is open to criticism either: the power is sufficient and easy dosage. Note that in common usage, it is not expected braking superbike for this V7.

Conclusion got to Test

Engaging and ready to customize: Sold US$ 10285, the Moto Guzzi V7 Stone 2014 is a small monument motorcycle production as a part of the heritage of Moto Guzzi. Its quality is in progress, which does not spoil anything.

Simple, sleek, almost distinguished, she has a natural class and something timeless. Its relative simplicity also lends itself very well to customization as its rival in Triumph Bonneville. 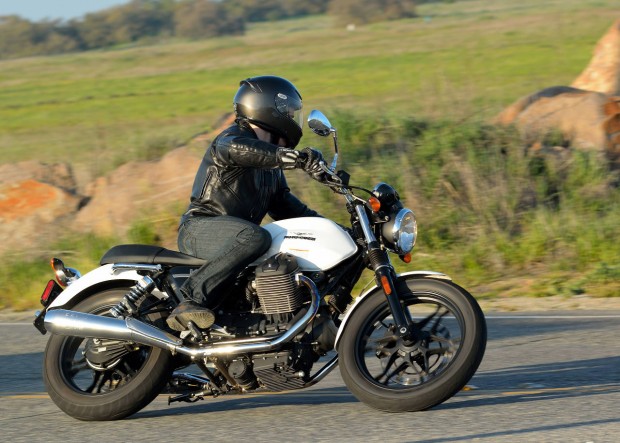 At the drive, even if Moto Guzzi worked to facilitate handling, the V7 is fairly atypical and, hence, offers a lot of sensations. Some aspects will be stored in the column of faults, either in the character: your point of view. But in the end, we note that the authenticity vehicle this bike within a production well sometimes sanitized.

I hope you enjoyed to know about the test of Moto Guzzi V7 Stone 2014 Test as Vibrant tribute to the past. Let us to know your comments regarding this test in bellow.