Test Harley-Davidson Electra Glide Ultra Classic Limited and 2014 Twin-Cooled Rushmore With water inside … but not too much!

After BMW, Harley-Davidson adopts in turn cooling mixed air / water on its iconic big twins 2014. A revolution in the land of the big custom tourer that we just test on several hundred miles in Colorado on the legendary 2014 Electra Glide, Ultra Classic and Limited versions. Let’s go, riders! 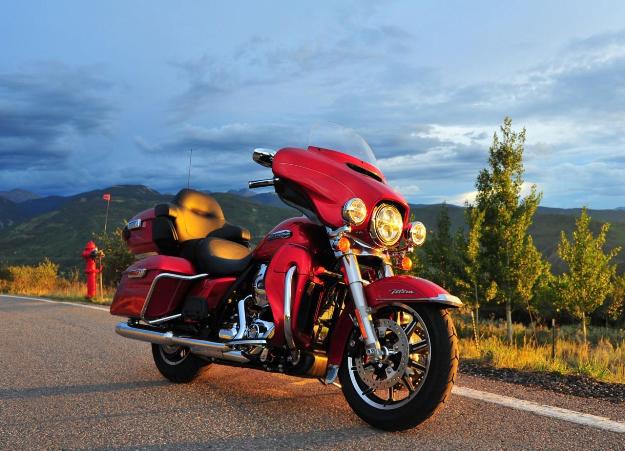 We tested in wind tunnel our new head of fork, the Bat-wing, with its new air intake, with equipped models from false beards ‘. The story told by a Harley-Davidson marketing manager is quite caustic, you will agree! But it speaks volumes about the efforts made by the firm of Milwaukee best meet the different expectations set by its customers. That’s the heart of Project Rushmore, a reflection of four years through which the U.S. company has asked the owners of Harley as well as its network of professionals.

The goal: make plethora of optimizations and innovations to the top models of the family Tourer to enter a new era. The Harley-Davidson Electra Glide Ultra Classic and Limited even more comfortable and safe but above all, a profoundly revised engine: 103 inch cubic door now the name Twin Cooled with a cooling now provided by the water and the air…!

To take the measure of this small revolution, MoCo invited us on its lands to test its range 2014. In the program, a rolling life-size in the heart of Colorado and nearly 350 miles traveled between Plains and mountains to tell you on the new stars of Milwaukee! Almost of the holiday, what… 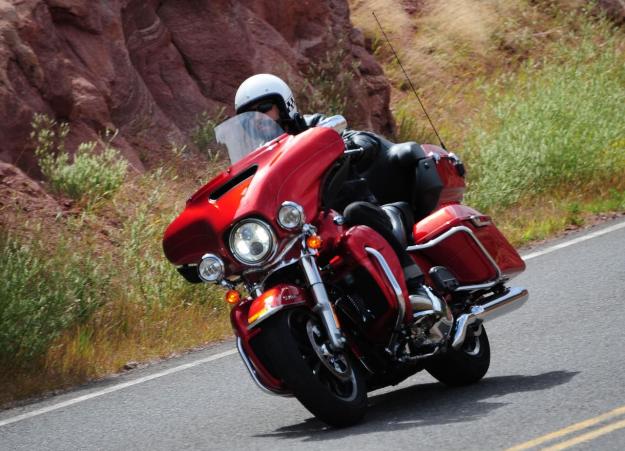 Chrome galore, custom paint neat, respectable template and exemplary finish, as always high quality Harley-Davidson impress. Facing the forty tourers aligned walk from our hotel in Denver, everyman is muzzled by the authentic look of vintage customs of Uncle Sam, and the expert warned welcomes him to observe the care to bring manufacturing these gleaming machines. No spot here in the approximation. On the Harley-Davidson Electra Glide Ultra Classic and Limited 2014 (among others), everything is cared for and adjusted to the millimeter.

Installed in a seat as enveloping as soft, the pilot discovered a unique board edge. Just as wide but less charged that previously, it incorporates now 4 dials (against 6 on the old version of the Electra) and a wide central 4.3 inch screen. The outdated exit CD player and place in an audio/multimedia system known as Boom Box, to read his MP3 player type Ipod or other, to connect its mobile phone, listen to the radio but also to benefit from a GPS on the version Limited – it is even equipped with a 6.5-inch touch screen… This Limited version, developed with Harman Chardon PA spits almost 300 watts with a very impressive sound quality. The ergonomics of the handlebar controls is very good, but it takes some time to adapt to familiarize themselves with the multiplication of the buttons.

Cruise control switched on, rocked by a selection of American standards (Rock’n Roll of course), we Argentine long straight pathways of Colorado in royal comfort, ideally protected by the new head of our Harley fork. Welcome to the paradise for bikers! 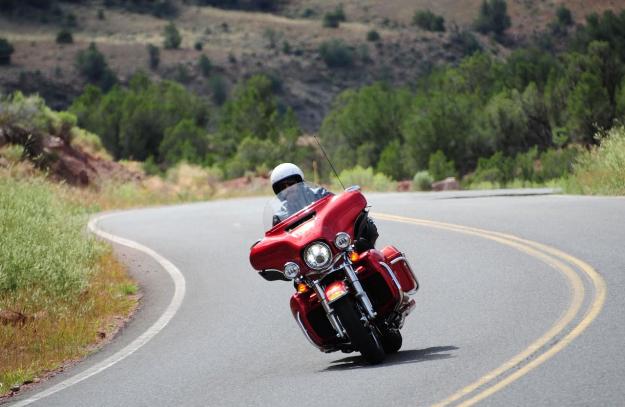 If Harley-Davidson promises us 5 to 7% of torque and additional power, it will likely have recourse to engine bench to appreciate this evolution, given more than 400 kg announced in running order… For the moment, stalled at 2500 rev / min in the first reports, the twin however seems a tad fuller than before, but we retain it especially warms much less games, more for the comfort of the entire crew. In addition, the installation of radiators at the engine guards also provides more protection for the feet and shins. It’s a real positive when the rain invites something that we have obviously checked during this test. 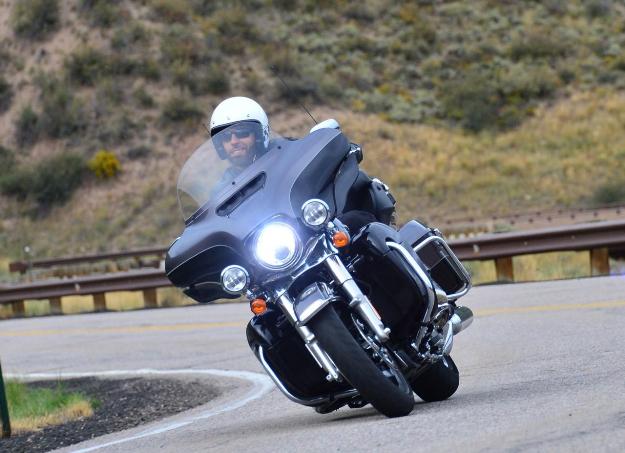 The sensations offered by 1640 cm3 are always also pleasant, with a response to the instant handle. Under 3000 rpm, the boost is not particularly convincing, but the ‘ploum ploum’ emanating from the large Chrome exhaust pipe outlets is more flattering to the ear. OWL! The acoustic signature of the new big block is identical to the former. Past this Cape, big torque tumbles in a more serious and metallic sound.

But no need to really push the reports of the handlebar Harley-Davidson Electra Glide even more in 2014. The block accepts tow under 2500 r / min, cruise easily at low and medium engine speeds, but also never feel uncomfortable vibrations. Venturing on the steep slopes of the mountains of Colorado or exceed the huge trucks on the highways can be considered on the same report. And if we play the six-speed box – well staged – new clutch control demonstrated a little more flexibility, but is still a virile nothing can be tiring even in urban environments. Nevertheless Ultra Classic or Limited, the largest U.S. tourers are primarily tailored to swallow kilometers, leaving commuting to other mounts … The Trail. 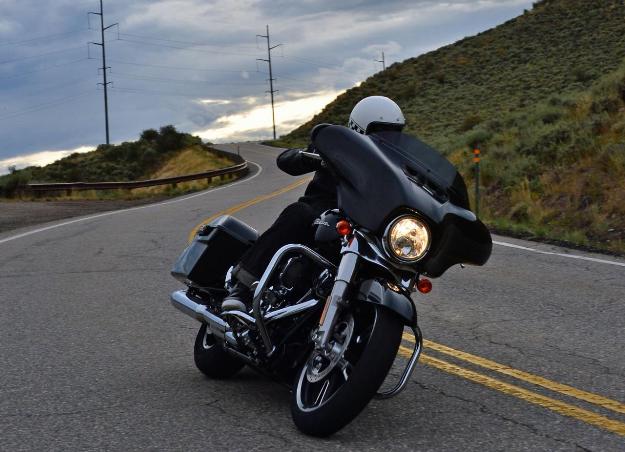 On the West, nothing once again

Therefore weight, long-wheelbase, impressive volume and low seat height, precautions are warnings to not go to fault maneuvering at low speed as stop. Dynamic, these mammoth touring are however not inconduisibles. Quite the contrary! Harley-Davidson Electra Glide Ultra Classic or Limited are two machines balanced, ultimately quite easy to register in curve and relatively stringent on the corner thanks to their sturdy frame. On straight roads, road holding is good, even at high speed, however at a brisk pace, with the passage of an irregularity of the roadway, curve especially, they always a bit.

On the other hand, braking, side we must admit that the system ABS (coupled) Reflex does wonders. Point intrusive, it ensures the evasions of the tires, then exercising optimal teeth on the front and rear calipers regardless of the operated command. Novelty, below 40 km/h coupling is no place, backward and forwards operate independently, so ensuring an easier control at low speed. 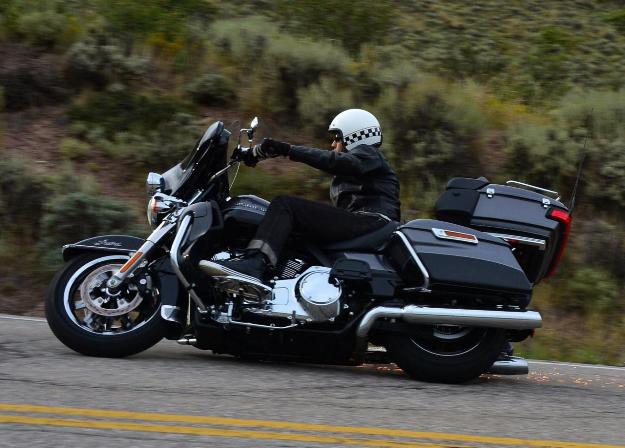 Conclusion: For comfort and equipment, less the price

For the long journey, the new Harley-Davidson Electra Glide Ultra Classic and 2014 Limited offer 5-star comfort. The new luggage is very well thought out. Under the imposing front fascia called Bat-wing, found on each side of removable components to bring air to the pilot. At radiators, other valves can be opened to cool the rider’s feet, on the central air intake of the fork head, it works efficiently to avoid turbulence in the upper parts of the body. The passenger is pampered. Broad-based new remote armrests, independent audio controls and spacious footrest, everything is done to make him feel at home. The new LED lighting (the ‘Day maker’) is also very powerful. 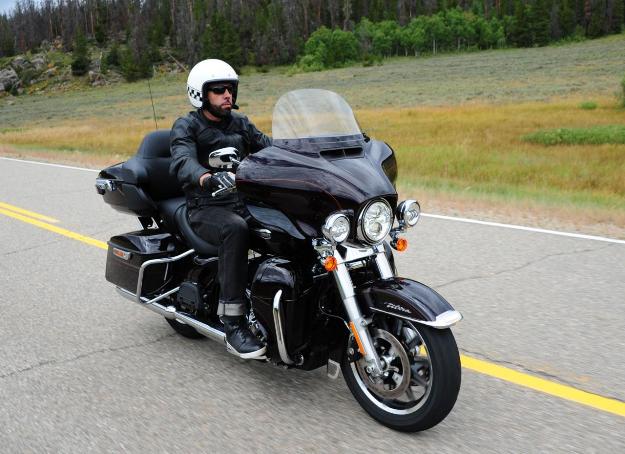 The engine evolution transcends not luxurious touring HD, but it will keep the traditional aesthetics of the big twin US while remaining always also relevant for travel lovers… wealthy! These emblematic and sumptuous mounts are indeed inaccessible to ordinary motorcyclists. Entry-level Harley-Davidson Electra Glide 2014 ticket is displayed at €27 790, but the Bill can still be increasing depending on the chosen color. To benefit from all amenities range from the Limited version, it will take this time sign a check for €28 290, or €29 690 for the high range custom color.