In some time, under the impulse of KTM, Husqvarna will absorb Husaberg: the 25 years end of history for the Swedish motorcycles of Enduro. Well the complete test of ultimate Husaberg is (already!) on bikesdoctor.com with, today, three 2-times of the range 2014: Husaberg 125 TE and Husaberg 250 TE and Husaberg 300 TE. 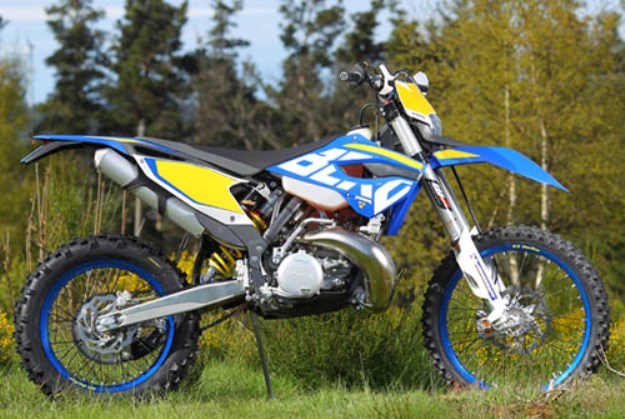 It is beside Mendes, the shortly after the Clover from the Lozere 2013, which we will find staff Husaberg France for the presentation of the range 2014. With seven models with the catalog, the Swedish Enduro range is rather well equipped. 2014 being the ultimate year of the brand, bikesdoctor.com thus did not hesitate only one second to test each one of these motorcycles.

With special nice, a superb excursion on the traces of World Enduro, different textures of ground and especially of the conditions weather rather changing with sun, rain and snow (!), the ingredients all was joined together here for a complete test. Honor with the cylinders with holes with the range YOU, of the motorcycles of Enduro 2-time which evolve gently, but surely, this year. 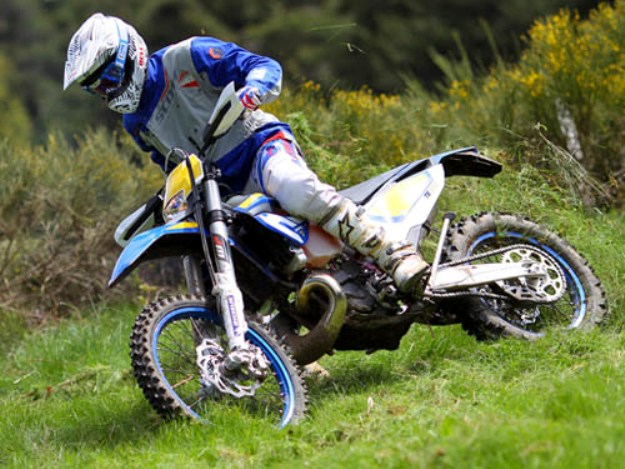 Difficult not to fall under the charm from Swedish! Nothing misses with the call to the moment to contemplate the motorcycles, a valid remark as well for the Husaberg 125 TE as for binoculars 250 and 300 TE. To make simple, one finds the integral panoply of KTM EXC with, moreover, one driving shoe, a back tallies out of Kevlar and glass fiber, of the t-pieces of fork anodic and a look different with in particular from the rims Excel Blue of very good taste.

No electric starter on the Husaberg 125, but small 2-time starts always as well. Unless being really very lazy, the magic button should not miss too much… One finds here a fork GT 4CS, the high-end of the brand. This fork remains faithful to the same concept (with a tube for compression and the other for the relaxation), but not bad of internal modifications are to be noted. Engineers GT are leaning on the side practices in order not to need special tools to dismount and maintain these tubes forks. Motorcycle 2-time often versifies with fine motorcycle, and that is confirmed with the three TE, the advantage going obviously to the 125. One finds his niche easily even if the cockpit appears high.

In dynamics, the Husaberg 125 TE is dissociated logically. True featherweight of the range, the motorcycle is transformed very quickly into toy! In spite of suspensions with the rather flexible settings, the promptness of the motorcycle is excellent. One feels here truly dominating over TE, one manages to change support without forcing, one recurs the traces easily and the rally between the trees and stones of Lozere is truly pleasant. Two large 2-times are also players and handy, but with their handlebar, it can become a little more difficult to catch up with an approximation of trajectory than on the 125.

Level suspensions, on the three TE, one feels sometimes a light hard point at any beginning of compression. In the sequences of small roots or stones, the nose gear wheel appears not to stick on the ground immediately that can surprise a little per moment. Except this detail, comfort is well with go, Husaberg absorb the largest shocks with serenity. The shock absorber is shown also as comfortable as effective. Besides the 250 and the Husaberg 300 TE take the advantage on the 125, the power passing with more effectiveness on the ground, Where two small-time crushes a little more to find the grip. It should be said that the couple is not completely the same one… and that the inflated back tire with 1 kilo (to avoid boring at the time of the excursion) does not favor it either. 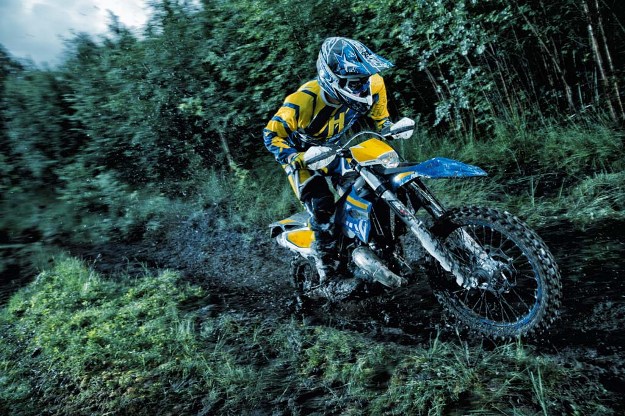 As always, only one blow of kick is enough to awake the engine of small two-time … and them management of the pilot. It sounds just Husaberg 125 TE. In track, its performances are more than honorable; the driving block is quite full for this cubic capacity. One can go down to very low mode without the TE not fixing, however one is sometimes between two reports in the slipping climbs, with a first which crushes a little too much and a second which can sometimes end up losing in output (a small adjustment fuel perhaps?).

Reassure, a blow of clutch will quickly have made start again mechanics. In the special one or the rapid, one gets caught up of the attack then, one cannot make this mill differently so much asks to take turns! And this side not of concern, it takes of them turns, one can really push the reports for a long time. 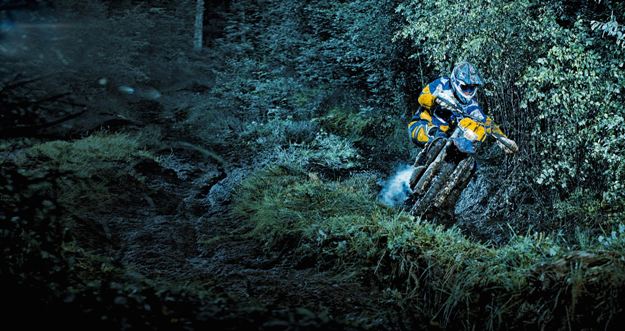 One goes up of a notch with the Husaberg 250 TE, a motorcycle which can frighten. However, this 2-time is really nice kind. Its engine is very linear, of a roundness one cannot more appreciable for the catch in hand. This engine a little “chewing gum” is able to box crossings with very low mode, then to go up with much linearity high in the turns.

There is what it is necessary where it is necessary to be left any situation. And the no-claims bonus with Husaberg 250 TE, it is that one can allow oneself to attack without being completely exceeded: one will not hide our joy with the idea of breaking support with great blow of clutch! Good, not all the time either because one often does not finish making a mistake… 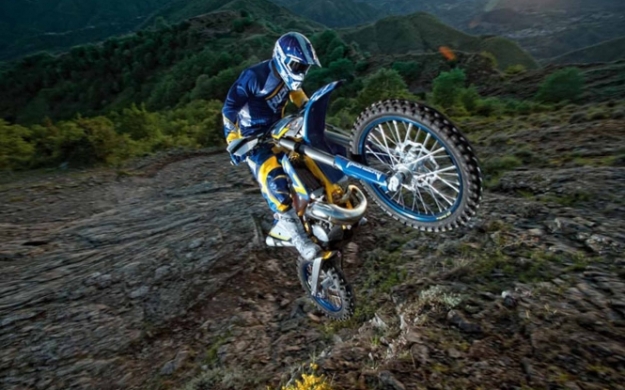 Finally one passes to the big-engine car of Husaberg 2-times: Husaberg 300 TE. Before even rolling, the more raucous and powerful sound which emanates from the silencer made understand that one is in front of an engine filled well. And that is checked very quickly: the 300 develops an impressive engine torque which tears off you ruts with force. Here, one teases much less the clutch under penalty of having a little evil to contain the cavalry.

In genuine tractor, one finds oneself to cross in extreme cases of the chock without even that not graining the 300! One can allow a fault in the middle of a coast here, since one preserves a thread of minimum gas, the large one will continue YOU his rise. The beach of use of this motorcycle remains targeted between bottoms and the mid–modes: it saturates rather quickly with high mode. Other side of the coin, it is that Husaberg 300 TE requires a pilot quite present, which with final is more tiring. 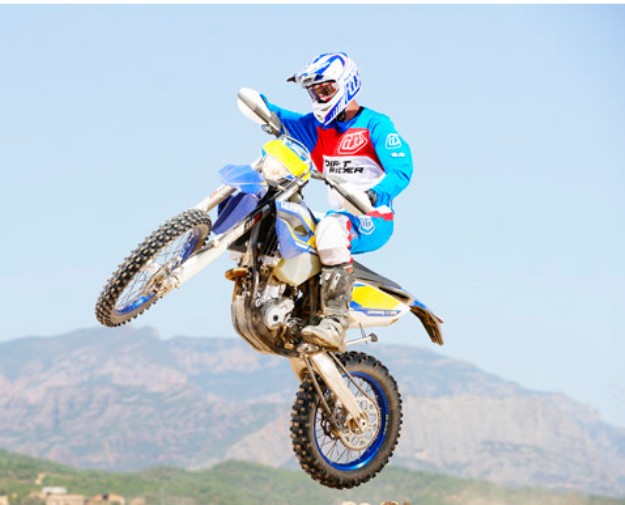 Assessment: 2-times always in the blow!

There is what to do to its choice according to its desires among thesis three Husaberg you. INITIALLY the 125TE, all which is addressed to young people aim also to the fans of small-engine cars. Largely it what make and there already there especially what to have fun, this motorcycle being to some extent a concentrate of fun. Note however that an amount of control and of experiment will be necessary to cross all the difficulties. If the power is sufficient to approach most crossings, it will be necessary to aim just and not to get mixed up the brushes at the time to pass speeds.

Husaberg 250 TE, proves, from our point of view, a “motorcycle with to do everything”. Its engine is not violent, it remains exploitable and fun at the same time, and it has the trunk necessary for all to roll up with effectiveness. Here a 2-time which puts boots on us truly.

Finally the Husaberg 300 TE is a true monster of power and couple, cut to climb with the trees! But it remains a delicate hair to hold over one day. It is not a motorcycle difficult to take over, but it involves sometimes a little too much. The attack with the handlebar 300 of the advertisement has solid physical and / or a proper control of piloting. 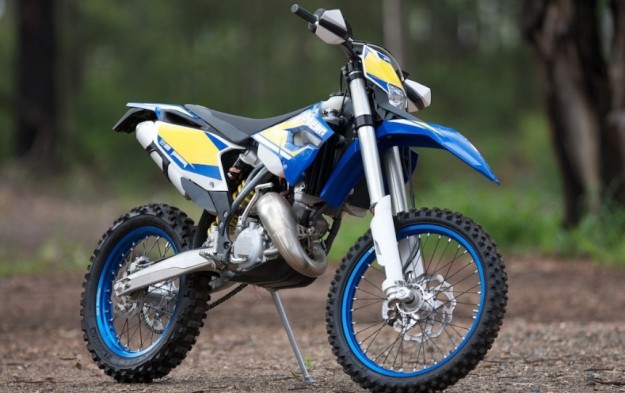 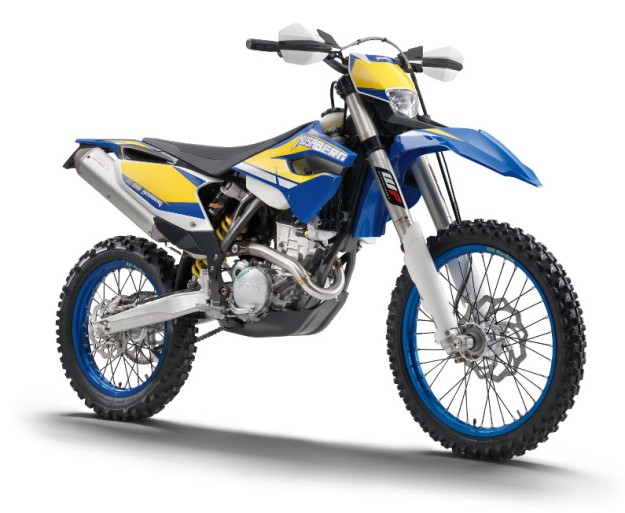 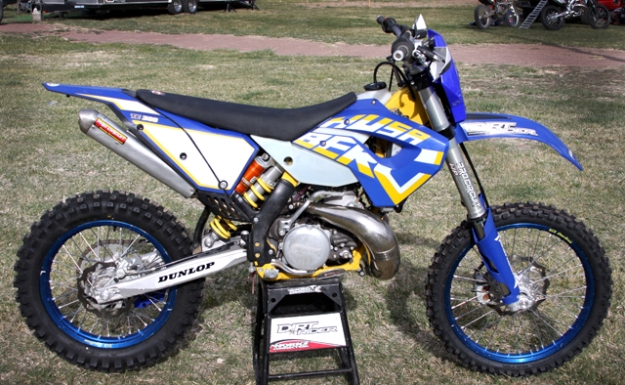