You do not find the BMW F800GS enough equipped for the raid? BMW has thought about you. With the BMW F800GS Adventure, you’re ready to face the African tracks (at least!): high bubble, side guards, controls Enduro, all-terrain mapping and especially tank stronger capacity, as many changes to the a (d) venture! We confronted them with the reality… 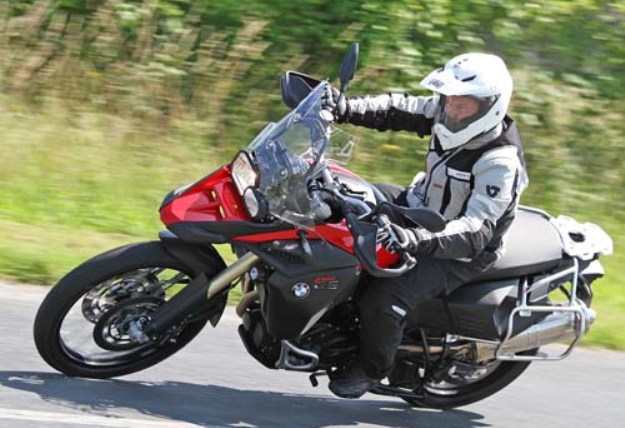 On the approach of the innovation ‘average higher cubic capacity’ 2013 of the German range, a report is essential: the BMW F800GS Adventure strongly points out his/her big sister, especially of profile. A striking resemblance, undoubtedly wanted by the originators to flatter the ego of the purchasers of the small ADV. Placed next to the standard version, the BMW F800GS Adventure appears to be largely changed, but not ‘tinkered’ provided. I must say that BMW has a long experience in this type of exercise.

The handlebar, no surprise: 800 Adventure very close rest of the GS, with typed ergonomics trail endorsing, promoting the standing line. However, the Adventure proved to be more voluminous everywhere. Most heavy to maneuver also: on our scale, props and 8 additional liters in the tank translates an increase of 17.8 kg or 240.6 kg all full facts.

However, there is real weight and felt weight. And it is well necessary to confess that BMW F800GS Adventure has nothing of an ‘anvil ‘. The very good initial, barely reinforced chassis shows its qualities once again. Whether it is for catch in hand or daily usage, BMW F800GS Adventure 2013 remains disconcertingly easy. She could almost seem ‘ on – agile ‘ for those who have never touched a modern trail. 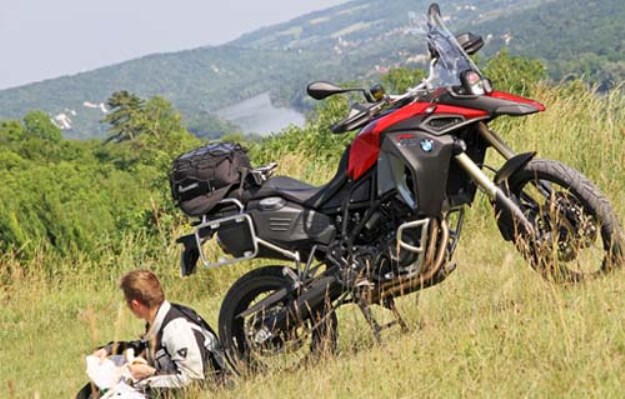 In the city, apart from the width of the handlebar and perched high Saddle (series 890 mm), BMW F800GS Adventure shows quite at ease: worthy of an Enduro turning radius, flexible controls, engine accepting resume at 1 500 rpm in third without hiccups. The back of a donkey becoming almost supports both the urge to jump on it is strong. Highway, the protection of the bubble and hand guard’s series provides more comfort. But it is the other softer saddle of Adventure that makes the difference with the breadboard of the F800GS standard version of…

At 130 km/h, i.e. 5 000 RPM in sixth, one has the impression to leave at the end of the world, but the vibrations – already known on the old template BMW F800GS significantly tarnish its approval. On the other hand, the autonomy is consistent: no more than 350 miles before reserve problem. Directional stability is good, hardly disturbed by additional equipment. Peculiar highway – road trail in good it is – the BMW F800GS Adventure nevertheless prefer the secondary network. Here, the balance between agility, steering precision and amortized suspension ensures efficient conduct serene, and frankly sports for the category.

With the peps of the 798 CC twin, reminders are energetic between 4000 rpm and 7500 rpm / min. taken sportingly, this engine flourishes in use on / off and to quickly adopt a pace removed. No doubt, 85 advertised horses are indeed! It is much more athletic than a Suzuki DL 650 V-Strom for example. However, rigor in driving suffers slightly curve of large deflections of suspensions. But unlike a more rigorous F700GS BMW F800GS Adventure 2013 can pull right through fields… 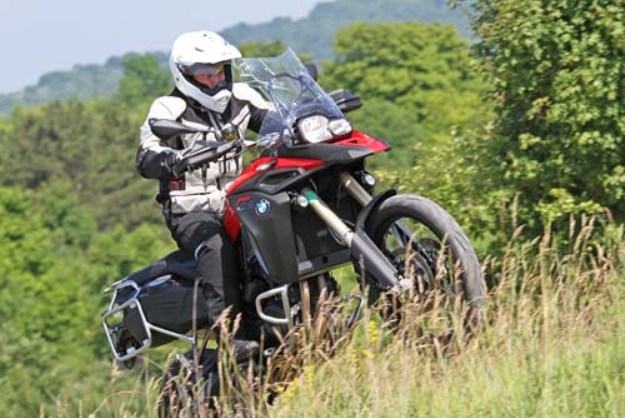 8 liters more in the tank

Discover the rolling paths, once the ASC and ABS disengaged, the BMW F800GS Adventure shows its potential off road. The suspension travel (230 mm front, 215 mm rear) allow calmly swallow holes and ensure a good guide, although BMW has not added racing compared to the standard version. We would also have liked this version of Adventure 2013 has settings fork, to satisfy most of us enduro.

Very natural standing, the 800 Adventure allows climbers due to its relative lightness. This bike makes the crossing and small jumps it was also designed for that. Mapping Enduro makes the engine more docile down, but the change is quite subtle. Much less noticeable in any case the rain mode some road bikes with multiple maps.

Floor Pirelli Scorpion trail, our test model quickly found himself limited to braking and acceleration on soft ground. This very distinctive trail sport GT tire (it team including the Honda Crosstourer 1200 or the Ducati Hyperstrada), shows not very ‘green’ design. BMW would therefore be well advised to offer its BMW F800GS Adventure with a pair of tires more typed TT. 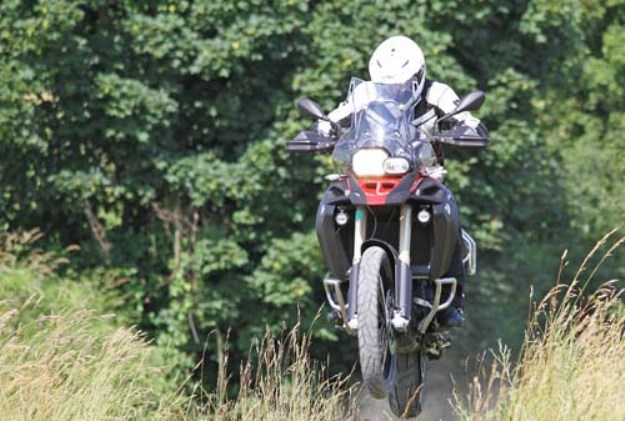 Assessment: A vacuum is filled in the BMW range

In the family trail BMW F800GS Adventure plays balance: more heavy and cumbersome as the F 800 GS standard, however it is better protected off the beaten. It is also easier in off-road than the R1200GS Adventure, particularly in the slow portions or when it comes to turn into a handkerchief.

In addition, the BMW F800GS Adventure fixes some flaws of the F800GS (protection, saddle comfort) and this makes it more versatile yet. No doubt what to win the match which opposed this F800GS to the Triumph Tiger 800 XC if you replayed!

Sold € 12,250 (€ 13,000 for our test kitchen packs comfort and Enduro motorcycle), the F800GS Adventure 2013 is naturally more expensive than the standard version (from € 10,950), but also more richly equipped. Remains the R1200GS Adventure, proposed from € 16,250 and … still at the end of life because always use the air-cooled boxer. The new BMW F800GS Adventure indeed therefore fills a gap in the BMW range, played pretty well.