Comparative of high flight, between luxury, pleasure, performances and comfort, melody of majestic the 6 cylinders in bonus. Is the BMW news worthy of the Honda reference? What does she propose moreover? Or of less, Let us see that in this very top-of-the-range match… 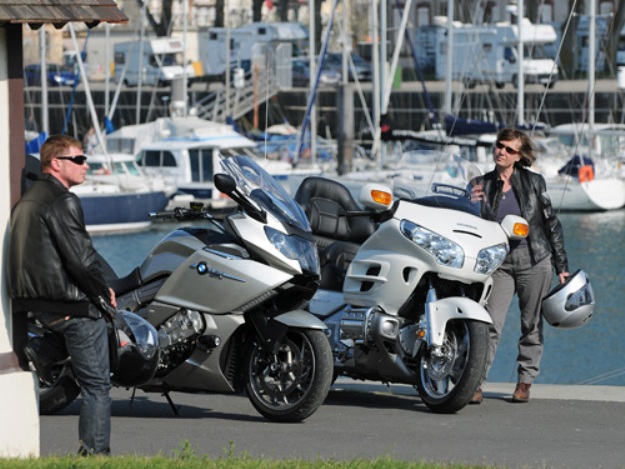 Our competitors of the day: more than 2.60 m long and more than 400 kg all full facts for the Honda Goldwing! Is it still a motorcycle, with its 6-cylinder flat that could just as easily fit under the hood of a car… But this reference to the superlative is – finally – contested by the brand new and already unavoidable BMW K1600GTL. A super GT at the German, sleek, fast, technological and it also, driven by a motor six cylinders, history to add mechanical nobility to his pedigree. A match at the Summit for a genus that displays record numbers on paper… but also an unsuspected efficiency on the road. 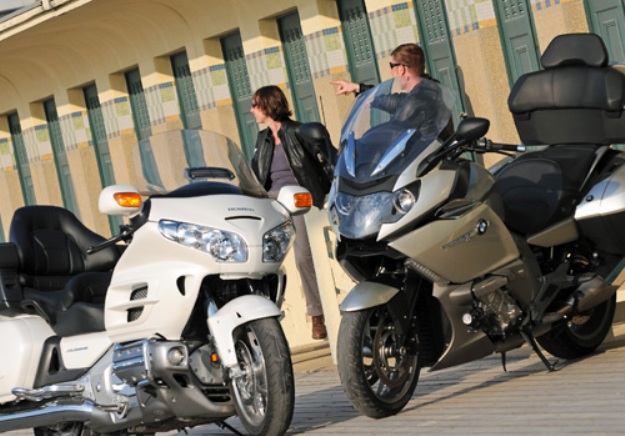 Off-shore against yacht, the comparison!

The Honda Goldwing, in its current capacity, appeared in 2001. This record longevity, it owes to a design flawless or almost, an attention to detail making reference, exemplary behavior… and the absence of competition obviously. But this year, this supremacy takes end with the introduction of the BMW K1600GTL, inevitably more modern. In his white livery, the Honda exudes a charming old-fashioned way old Cadillac, then the BMW, cut to the sickle and equipped with optical ultra techno, smells good German engineer’s brain juice. Small surprise between profiles of motorcycles, Honda shows a rear monopoly, vested in the passenger and luggage, while BMW has removable luggage, as on a classic GT. Maybe, by operating the motorcycles, one notes the weight more contained of BMW, 50 kg lighter than the Honda, but of which the higher center of gravity requires finally more attention than envisaged.

Comes the time to sit with these ships offshore. There again, the years that separate them felt. On the Honda, the seat is low (740 mm, as on a custom), but flat and wide enough and one has the impression of being close to the steering column. Environment is teeming with buttons and can be guessed already that it will take time to tame it, but the finish is correspondingly: opulent. On the BMW, the saddle is barely higher (750 mm in ‘low’ setting), but mainly its form is worked: close to the base of the tank to easily stretch the legs down, and then padded to the buttocks. The steering column is removed from the bust, but the handle is bent backwards. The reservoir is bedecked with no order, because a rowel in the left stalk centralizes numerous functions: we here are projected in epoch of ‘ very numerical of the Earth ‘ in two wheels. It is high time to start turbines. 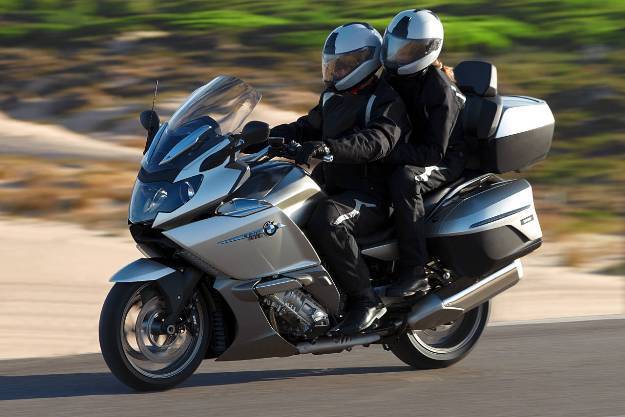 The K1600GTL is incredible agility

These two motors share the same number of cylinders, and a distant capacity of less than 200 cm3 but it is really all that brings closer to them. Having endowed 6 cylinders with one Boxer portray (2 x 3 compared cylinders) in dish, Honda Goldwing broadcast an almost husky, serious breath, with a marked inertia and a rhythm of slow motion which always wobbles. At his side, the BMW emits almost a yelp the inline 6 climbs in the towers without inertia compared to the flat-six of the Honda. From the outset, one highlights his sportsmanship (already), and this is confirmed in the grip.

Let’s be clear these two motorcycles, huge, heavy at zero speed are almost light beyond 25 km / h or totally impressive beyond, when the sets are balanced and everything becomes fluid. But it keeps no less than huge difference. Honda Goldwing is a monster of equilibrium with weak paces. The motor with dish lowers considerably the center of gravity and the smoothness of the mechanics (order of clutch, box, tree and universal joint) bring an unsuspected calmness. Very quickly, they settle comfortably on second or third report and they dare to baste, watching out nevertheless for his size of semi trailer.

The BMW contrasted with unparalleled agility, which will not cease to amaze us in this comparison. It does not turn; it plunges and, especially, shows much more reactive steering than the Honda, which takes its time when you push on his handlebars. BMW leaps to each rotation of the handle then on the Honda responds less quickly. This lag time is eradicated on the modern BMW, whose throttle seems directly connected to the rear wheel. This connection also shows its limits in terms of approval: the BMW is very dry transmission; spread over a net of gas causes a kicker under the rather unpleasant buttocks, especially when we try to do without and that it fails.

But this involved above all our trial bike. We subsequently took over other BMW K1600GTL, which have proved to be gentler and so pleasant. It does not remain about it less than this acceleration of rocket offers new feelings on a tourer. Sat in the BMW armchair, one plays of the throttle hand grip like joystick, the lane weaving towards the motorway looks like video game then. 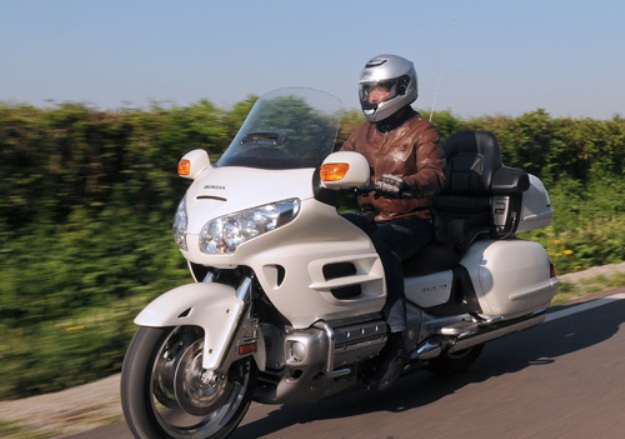 The Goldwing is a must in GT

Calibrated at 130 km/h with speed regulators, we find the rather long time. There is always way to discover the functioning of the radio between the multiple buttons on the Honda and BMW wheel, although the km could scroll more quickly without even disturbing, especially Germany, both the BMW seems made to swallow the asphalt at high speed. Their protections are remarkable, so much so that one can roll with the screen raised without another embarrassment that the noise level comparable with that of a roadster of rolled average. With the liking of the goings beyond and exchangers of motorway, one notices that BMW measures Honda with the game of the recoveries, in 5th as in 6th, thanks to a new mechanical promptness at the touring.

Strong couple, Honda does not lag so far, but can only – at best – remain in contact. Then, we note that the BMW has a heading maintenance more sensitive to the elements than the Honda: grooving, wind gusts, it takes a bit of cottage while the ‘barge’ Honda remains marble. It must be said that the Gold has a longer wheelbase of 40.2 cm, no less. In fact, it is necessary sometimes to compensate on board BMW to keep a perfectly rectilinear course. Let us check these aptitudes on the small roads. At the end of 2 km of turns, the desire for attacking is omnipresent on board BMW, where all is inciting, of the angry, expressive engine, full with pep’ S between 2,500 rpm and 5,500 rpm (in this 100 hp version) with the agility of ballerina who only asks to devour the turns. It is very simple, in the first curves, it is necessary to raise the motorbike so much it quickly takes you indoors… And if turns are transformed into successions, it is still better. It does not take of roll, waddle on its adjustable suspensions by running: thank you ESA! In brief, it loves running quickly, whatever is the state of the putting on thanks to suspensions which make light of changeability.

Behind the Honda followed with a wiser philosophy. With it, you can wrap all types of turns with astonishing speed, but must break the operation. It then brakes academically, placed well to be on his motorcycle doing not have to correct the path, and it still happens. Improvisation is not really the strong point of the Honda, which at the same time, revels in the pins swallowed on a net of gas. It remains nonetheless ultra healthy, even if it gives less want to play than the BMW, who remains unflappable on the angle that one has reached the limits of guard on the ground or not. The BMW establishes new references in terms of agility, especially at the outbreak of the turn, face a clumsier Honda. 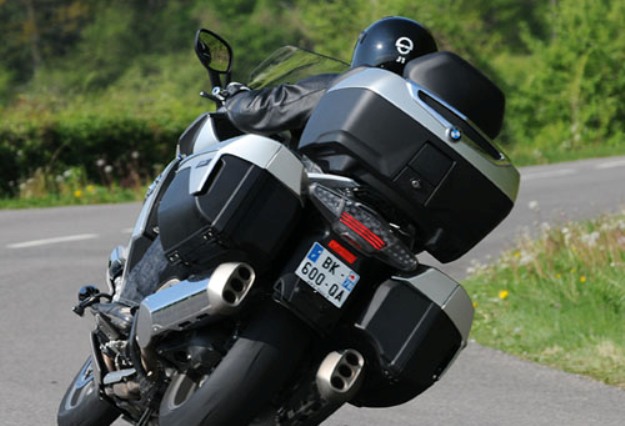 One breath, one whistle, the two sing

On the way, they lock the last report to be profitable to the full of this tasty mechanical. Both blocks resume in a wholesale trade 1500 rpm on the last report. BMW resumes in a not linear manner, with an instantaneous answer, a lively motor and a growing potency. However, the Honda Goldwing, one can easily imagine an automatic install, as the BMW, we find the idea incongruous (this is anyway not in the program, according to the manufacturer itself). And besides, the rapid transmission is faithful to the spirit of sport regime falls only slightly between each report while Honda lost 1200 rev / min for each gear engaged. 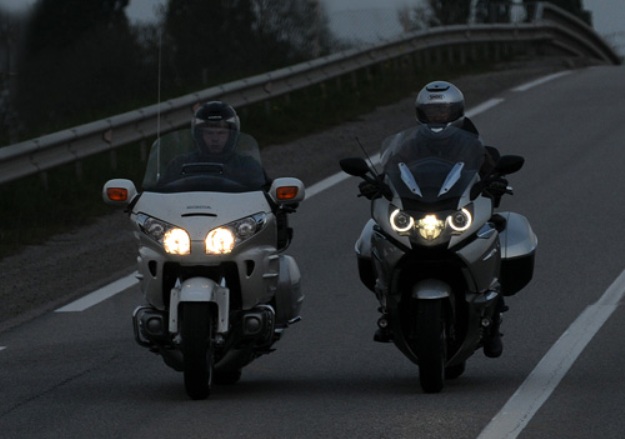 A passenger place in gold on Gold

Two hours thirty later, we arrive at destination. We empty the bags which show a hair more tenantable on Honda. Our momentary, Sylvie, already seems to hold her verdict. BMW K1600GTL is comfortable in the absolute – it would be necessary to be difficult to complain some – but it cannot compete with the Honda Goldwing, which approaches a convertible on this point. Both bikes are true hymns to tourism bike, but each in their own way. We suspected from the start, but the BMW shows frankly sportier. Its modern design is felt on many aspects.

Demonic agility, very responsive sporty engine, electronic driving aids galore, versatility between comfort and sport the BMW K1600GTL is remarkable in more ways than one, but it is aimed more at couples ‘dynamic’ that Wingers. The last Gold remains a must in this area, to travel far and more reasonable speed. And given the ambient suppression, it is far from being negligible.

Finally, these two motorbikes prove to be rather different. The news Big Luxury tourism from BMW adopts a very sports philosophy for type. Competing with GT more light in turn, BMW K1600GTL proves to be fantastic in terms of performances, in motor as in party-cycle. It is very dynamic touring that gives its lot of feelings, even in this version tied down in 100 hp. by our absurd legislation. In fact, it brings new impetus in the category for a finally ‘reasonable’ price given its range of novelty and its embedded technology. Our model to test, with options, is less expensive than the Honda (€24 615 against 28 €990 for the Honda). With such capabilities, the BMW K1600GTL can only prevail in our objective rating.

The situation is quite different of our subjective opinions where the charm of Honda always acts. The regret is that BMW has perhaps too focused on sporting terms since the BMW K1600GTL lack accreditation mechanical when it wants to run more quietly and step on crucial points in the category, as the home of the passenger or… the very useful (featured on the Honda) reverse. 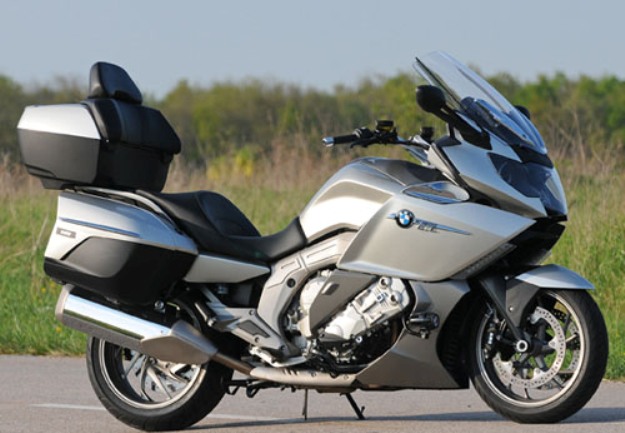 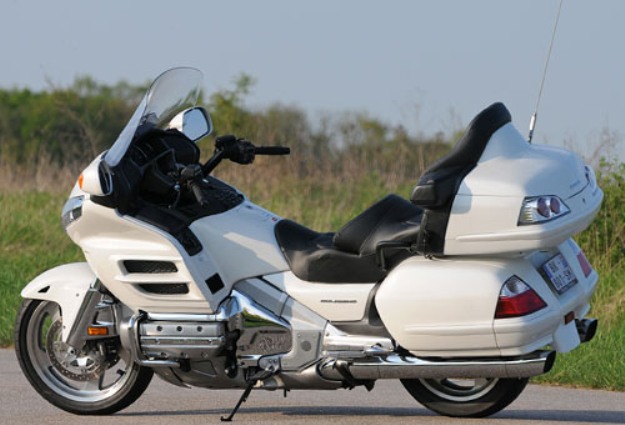