First BMW with a 6-cylinder in-line (!), The K1600GTL promised on paper approval, performance and high-end equipment. On the road again ‘free’ of South Africa, this sedan on two wheels we were very impressed … also by an unexpected character. A new reference is born! 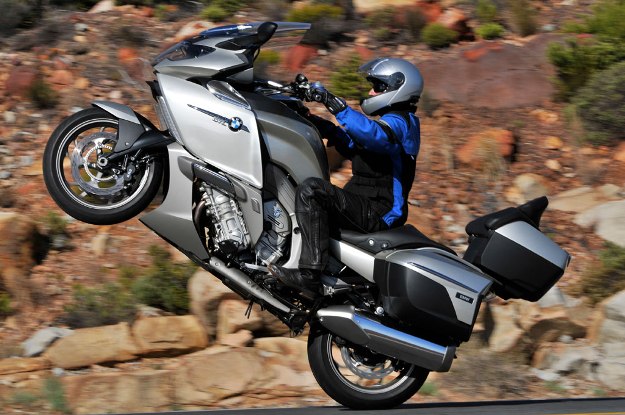 The first impressions are sometimes misleading. Revealed for the first time at the living room Intermot at the end of 2010, quite malignant that which could have detected in this impressive motorcycle of Great Tourism of more than 350 kg (figures manufacturers) such a behavior. Because on the first turns negotiated on the superb roads of the surroundings of Franschhoek in South Africa, the new BMW K1600GTL destabilizes me (without word game): Agility is bluffing! This new (very) high-end road has probably the most responsive steering of the class, if indeed one can have the catalog … So much so that it bothers me at the moment. Reflexively on a motorcycle of this template, it tends to naturally force corner entry line, highlighting the counter steering to better balance all on the corner. Here, such control takes you at best, on the low side, at worst in the ditch, but on the same side! 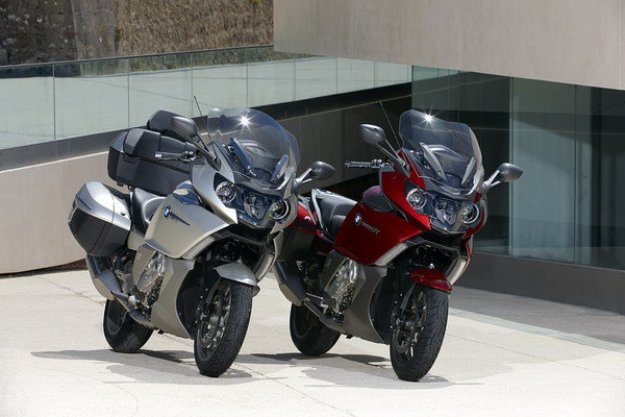 Not the rocking chair

At the first stop for lunch from noon, I call Andreas Stangl, responsible for the development frame of this new BMW K1600GTL. It confirms indeed that some of the work focused on the optimization of agility: engineers have reassembled the engine in the frame, near the center line of crankshaft of the front wheel axis, adopted a front rim of K1300S lean, among others. Then, once retorted, in the course of kilometers, this confusion is slowly transformed into a more and more nice surprise: forget Gold Wing, other one classifies GT of type, BMW K1600GTL, her, claims no treatment of favor.

Here, one displays an obvious standing, that one in vain rest impresses embarrassments of the brand: the travel of agreement, but style – sportsman – initially! On board, that results soon in a piloting into flexibility, without forcing too much on the half-branches of the broad handlebar to negotiate the turns. Confidence settles and one then surprises oneself to roll at usually booked intervals to less bulky machines. 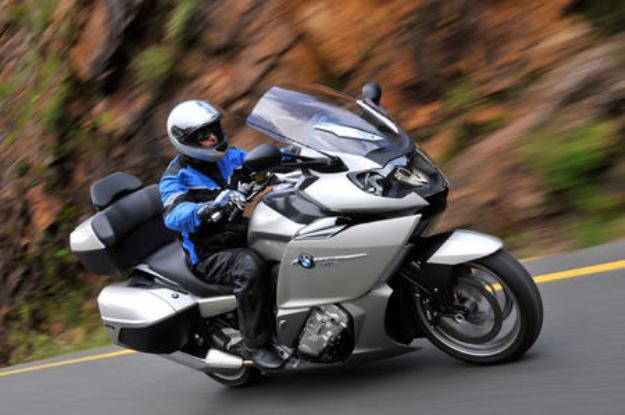 Regulated on the sport mode of system ESA 2 commander the suspensions, the motorcycle raise him of 8 mm on the back, while hardening the answer of his shock absorbers. If comfort loses there obviously, one remains despite everything in a much felted environment. The motorcycle preserves a quite horizontal plate most of the time, exploits little its clearance as well with acceleration as with braking. In short, you swallow the road as in an armchair, but not of the kind rocking chair flesh.

The BMW K1600GTL leaves the seasickness to American to preserve a rigorous comfort, with German what! Even the saddle, however punt and equipped with a splash plate of the mousse kind, is hardly pointed out by your becoming grateful, if it is not by its height: a small gauge should not have any evil to pose the two feet on the ground, and flat. Meanwhile, the posture of the bust, straight, defers your look far ahead, through the bubble. In the low position, it generates some whirlpool and ample wind whip the face for good remember this evidence: in this end of the world, the interpretation of the code of the road leaves more room to ‘natural’ conduct and a real sense of freedom. At that moment, so you will cross to 4 500 rpm, the meter displays 160 km/h… 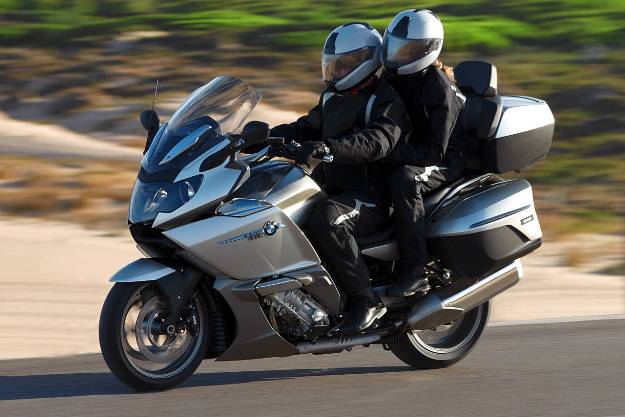 If you are already used to the excellence of the behavior of the German road range tops, it knew nothing about the BMW K1600GTL engine. First of its kind on a BMW Motorcycle, this 6-cylinder-there is probably no better than his 4-cylinder predecessor. Worse, it dulls all (without to handicap his behavior, as just to see). However, and this is undoubtedly the best argument of the BMW K1600GTL, this engine provides sensations ‘exceptional’ thought to be missing with the latest Z1300 80s. First point, six-cylinder is not a tractor like a Gold Wing for example. Below 2000 rev / min, it is better for letting the clutch slip from dignity or avoids stalling in a turn on the road.

But at least, suppleness is in date, it goes down unless 1000 rpm in sixth without turning a hair. Then, until 4 500 rpm, that one draws away about 450 kg of the crew very wet with dignity, but there still, without particular talent of an objective point of view. But the amateurs of type, them, will already keep this typical character, linking a felt music to a devoid functioning of vibrations. In the bubble, a big right end stands out, you have of the place. You are demoting. The system passes the 4 500 rpm, the bike rushes for good.

Finished the discreet whirring, the soundtrack clearly gaining aggressiveness, is more metallic amount frequency, while the tachometer needle speeds up its rotation… The 6-cylinder is in his best element, he tows fort until the vicinity of 6 500 rpm, times a few hundred rounds then resumes of most beautiful to lengthen the stride up to more than 8 000 rpm! It is not brutal as on sporting for example – here the weight smooths acceleration -, but that is not less impressive in term of performances and quasi great in term of feelings. So that one quickly exploits each opportunity of misusing it, for the pleasure of hearing it and of letting themselves carry, quickly but without brutality, by this luxurious high-performance touring car. 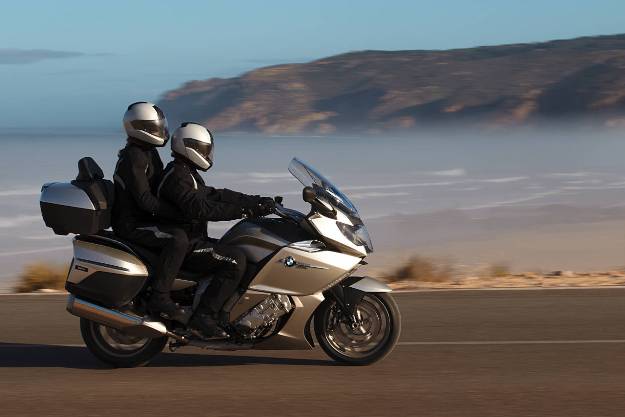 Of course, in such an idyllic country, with the handlebar of a ‘sensational’ motorcycle at the very least, temptation is large to embellish the table. The more so as if one endeavors this time to list the objective weaknesses, this BMW K1600GTL remains difficult to pin. Braking? Simply excel, progressive, easy to proportion, accurately returning information with the lever with the handlebar – less with the pedal – and especially, powerful, even if two or three stops muscle in a row always release a strong smell of overheated pads… These brakes are equally difficult to take defaulted on the corner, almost not under the bike.

The tires Metzeler Z8 tested here gave full satisfaction in terms of grip, as the DTC ensured the grain as possible evasions of the rear tire when accelerating on the corner. The holding of cap impressive up to 180 km/h, it degrades quickly beyond due to the presence of the top box on the back of the bike (which is why the K1600GTL is restricted to 230 km/h meter unlike the BMW K1600GT which is not affected by this problem). The equipment it is bloated, with multiple controllable features directly to the handlebar control Kit (DPT, ESA, radio / audio, cruise control, heated, cushion handles and saddle electric, on-board computer, etc.), the handling of different commands we seemed quite natural, including rolling. Luggage, the two suitcases can hold a full-face helmet, the top box more.

The ground clearance, certainly, it is limited, as the BMW K1600GTL features footrest lowered and advanced compared to the BMW K1600GT. The transmission, at low speed, it feels like light jogging if it doses not finely gases, and above all, a pretty sound snap, but then again, nothing really annoying. Meanwhile, the box is not exceptional; she asked to apply to switch speeds reasonably quickly but at low revs loudly. To note, some among us were entitled to some unhooking in full acceleration. The duet, the saddle firm and is clearly raised compared to the pilot, the passenger is very exposed with the wind with the bubble in low position, and with the movements with the high bubble. In duet, the pilot will have clearly to reduce his speed… 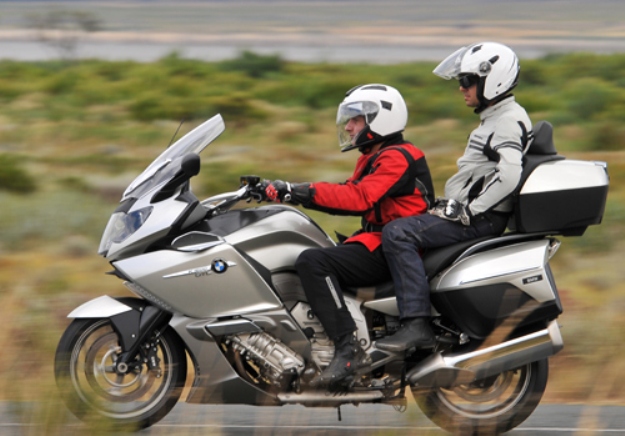 … And this is precisely where could, in the end, addressing the main gripe this bike. Because, as seen, if it is here of a GT, this BMW K1600GTL remains not less sporty in the broad sense. Among other things, there where could expect more torque to wind up at low speed without having to demote systematically, and overall behavior ‘stronger tourism’, this machine just surprises by its General liveliness, both engine and chassis. Although it is of course capable of everyday ‘normal’ (and relatively happy with respect to its size and weight), it naturally invites a dynamic steering. 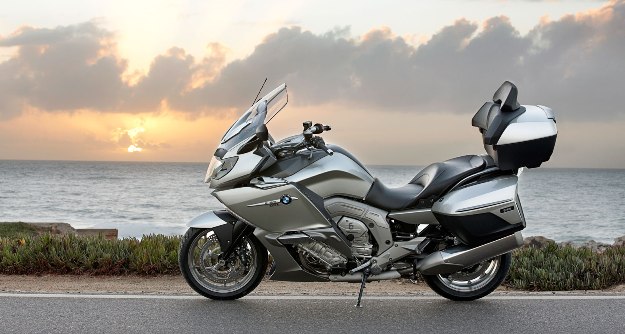 This BMW therefore requires space to express its tremendous potential, which does not lack in South Africa, but rather in our country. Thus, if this new BMW K1600GTL is registered like a logical competitor for the GL 1800 Gold Wing and it’s quite as single ‘flat-six’, it is it above all by its standing more than by its character and its general behavior. It is just a question of being about it quite conscious at the time of the choice.