The half million (500,000) Boxer-powered GS model a new R 1200 GS has rolled off the production line at the BMW Motorrad factory. Production of BMW motorcycles commenced at the Berlin-Spandau plant in 1969 and the first ever GS penetrate production in the autumn of 1980. Since then, over three decades of GS motorbike have been manufactured in Berlin and delivered all over the world. The GS Boxer-powered models, from the original R 80 G/S to the all-new R 1200 GS Adventure this year, have become icons in their own respect.

What started as a revolutionary 798cc, 50bhp dual-purpose model has evolved into an iconic, genre-defining 1170cc adventure motorcycle, making 125bhp and offering riders state-of-the art technology and performance-enhancing aids, including on and off-road ABS, traction control and semi-active suspension. 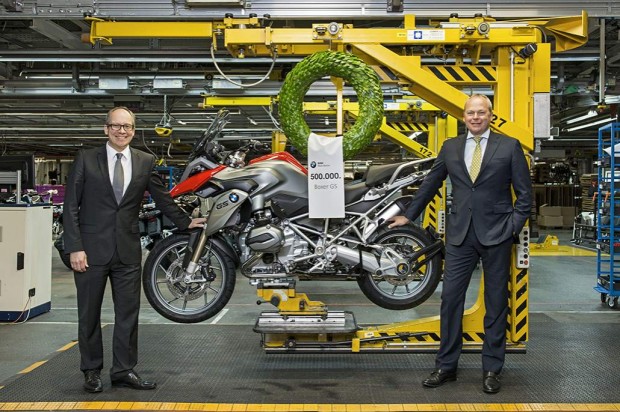 The GS Boxer-powered range changed the motorcycling landscape around the world, creating the adventure sports category  now one of the fastest growing sectors  and breaking sales records along the way in the United Kingdom  and Europe.

The liquid-cooled GS 1200 R was the UK’s best-selling motorbike over 125cc in the year 2013, as well as the best selling motorcycle outright in Europe. With over 25,000 registered worldwide, the first ever liquid-cooled Boxer GS became BMW Motorrad’s fastest selling new model in the company’s entire ninety year history. 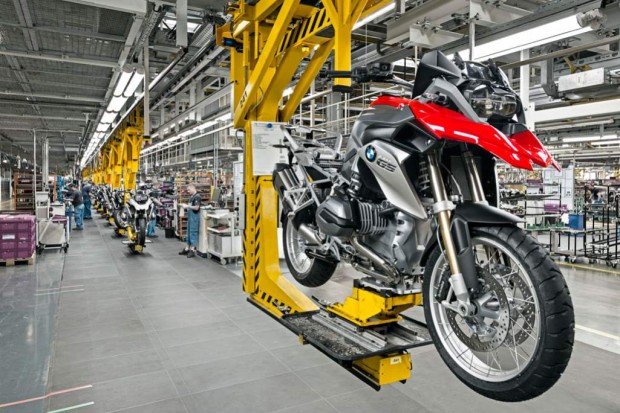 According to Stephan Schaller, President of BMW Motorrad “By combining street, off-road and everyday qualities, BMW Motorrad created the new travel enduro species with the R 80 G/S. The flat-twin GS became the synonym for this segment. The outstanding talents of the Boxer-powered GS models  ride dynamics, off-road qualities, comfort and endurance  have been continuously nurtured, developed and transferred very successfully to other BMW Motorrad model series. According to”Mr. Marc Sielemann, Head of the BMW Motorrad Berlin Plant,“As a plant it is a privilege for us to continue building on the successful history of the renowned flat-twin GS. With the precision cooled drive unit, a new evolutionary stage was reached last year. Manufacturing half a million (50,00,00) units underlines the fact that the Boxer GS represents a cornerstone of our motorcycle production more than ever before.”

You can see a video of the production of an R 1200 GS motorcycle at the BMW Motorrad plant available on YouTube and for more information on BMW Motorrad UK products and services visit www.bmw-motorrad.co.uk or you can call toll free at 0800 777 155.