In the year 2014, Yamaha XT 1200 Super Tenere ZE is popular as a being news, with its electronic suspension and a more homogeneous engine and at the same time, standard equipment becomes overstuffed, cruise control, setting new bubble, heated grips. What revive the career of big road trail Yamaha? It is Quite possible.

To a generation of fans who enjoyed the famous Yamaha XT 500, Yamaha XT 600 and other Yamaha XTZ 750 past decades, the label “Super” Tenere is obviously associated with the heyday of the African rally raids, in Dakar, Stéphane Peterhansel, Jean-Claude Olivier. In the year 2010, after almost 15 years of absence in the slot, Yamaha returned to the big road trail bike with a modern, well in tune with the times, the XT 1200 Z Super Tenere. A landmark in more ways than one bike, even if it has not yet  succeeded in dislodging the BMW R 1200 GS from his throne. 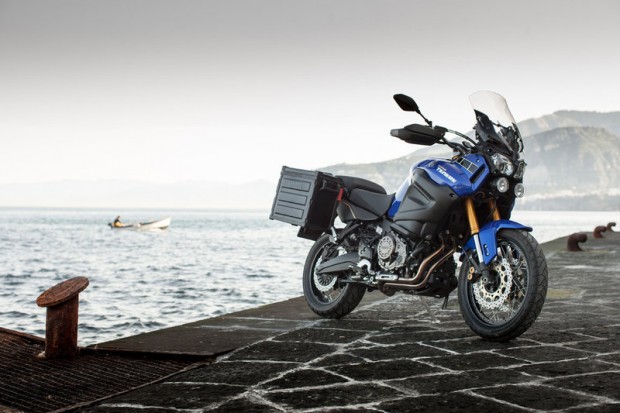 Certainly, unbolt the reference big road trails does not happen overnight, but Yamaha did not give up either. For the year 2014, the brand with the forks has a significant change in its 1200 Super Tenere is designed to measure the meter standard German but also competition increasingly upscale and equipped. It was in Italy, in the region of Naples, we have achieved the first test of the new Yamaha Super Tenere XT 1200 ZE. 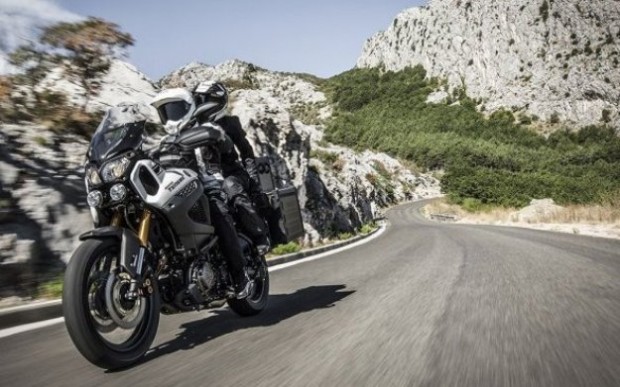 An adventurer in evening envirment

At first momentary look, the new 1200 Yamaha XT ZE 2014 strike by its excellent finish. Already well in meeting its earlier version, the Super Tenere is still evolving a notch in 2014. LED turn signals, mirrors from the line of MT, aluminum handlebars, new seat always successful and reworked sides are all treated as pieces that perfectly consistent. Yamaha XT 1200 Super  seems designed to last and Yamaha proclaims piercingly “one of the highlights of the Super tt is its dependability”

Home side, adjustable seat height 845-870 mm shows well enough designed to enable templates means of escape. With 1.70 m below the height gauge, soles help, I manage to master all the stops almost aboard the big motorbike. The tank is large enough, more than the (almost) sylph BMW R1200GS 2013. The thighs are moderately apart while sitting on the Yamaha, anyway the handlebar triangle/seat/footrest is very versatile: sitting or standing are very successful and reveal a sense of relaxation certain. Yamaha XT 1200 ZE 2014 exudes touring. 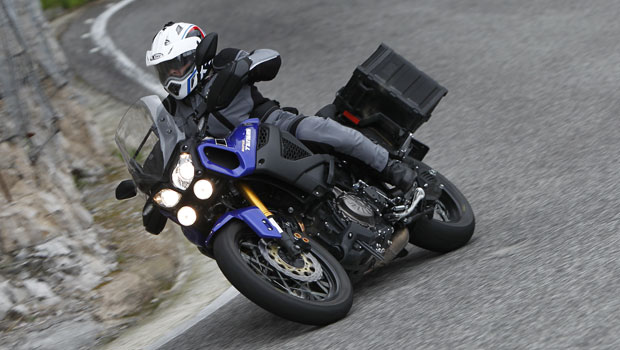 It is Designed to travel far and wide

Breathe the air box about the first third opening the throttle while the exhaust emits a slightly hoarse sound less “agricultural” before and with the Akrapovic silencer homologated available in Yamaha is even better. We leave the hotel to engulf us in Sorente, a coastal town south of Naples. Impossible to escape the single main street to reach the mountains or the coast. Traffic is heavy, delicate interfile with scooter riders who jostle and motorists incisive kind. In this context, we appreciate some highlights of the Yamaha XT 1200 ZE.

It is revised for 2014, the accelerator very specific YCC-T electronic assistance shows. The hydraulic clutch, too retouched, is flexible enough to collect this urban chore. The twin has always shown good flexibility, allowing changes-very-slow third gear leaving down the regime until 1500 rev/min with covers quite correct. If you can easily cross the city on the first three speeds must exceed 50 km/h to engage the 4th. Finally, given its size, the Yamaha XT 1200 Super Ténéré ZE pulls out honestly this urban chore, although it should take into consideration the width of the bags optional. 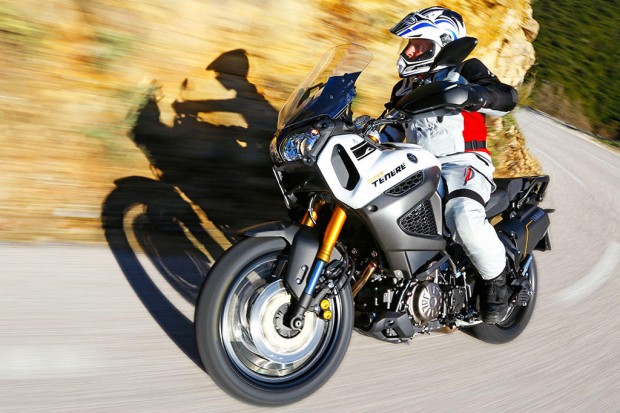 Finally we discuss the small forest road test Yamaha XT 1200 ZE 2014 to climb to the first picture spot, a few tens of kilometers. The ascent is via a steep narrow road, poorly maintained and fraught with many pitfalls. Between bitumen drying, flush the roots covered with moss, leaves flattened by the passage of local cars and many holes abandoned to their fate by local roads, there is plenty to do.

Although motorcycles become painful on such land: the new Yamaha Super 1200 Tenere 2014, on the contrary, it treats its driver. I took great pleasure in raising the pace on this unattractive way. In S mode, the engine is very responsive and reworked mapping makes it much more lively and demonstrative between 2, 500 and 5, 500 rev/min on the first generation. It pulls strong, muscular and linear way, with the delicious sensation of traction close to flawless.

TCS traction control of Yamaha is one of the most transparent market losses especially times almost no adhesion destabilize the rear axle of the Supper XT1200ZE. It is also benefits from a glossy frame with excellent neutrality, history hides his best Kerb weight 265 kg without bags. Result, the 15 km climb to the thousand traps are swallowed quickly, safely, in comfort and giving want to force the pace constantly. Not dreadful, it was good.

However the Yamaha XT 1200 Super ZE Tenere 2014 has not finished his expression. In the dedicated menu driven suspensions, I spent a soft hard setting, varying opportunities -3 to + 3 by setting as the Yamaha FJR 1300 AE.

Require higher clearances, various adjustments impacting the behavior of more big trail than the GT. The suspensions Yamaha XT 1200 can therefore move from “very soft” to “significantly hindered” bluffing when opposed by a few tens of meters settings are adopted.

I begin a session terrain confirming the excellent standing, the damping work or softness of the accelerator, even disconnecting the traction control. The enduro in the soul regret the inability to disconnect coupled, especially at the rear brake so useful to rotate the bike off-road ABS. Still, the 265 kg of the Super Tenere is not catching the end of the boot, better be careful. 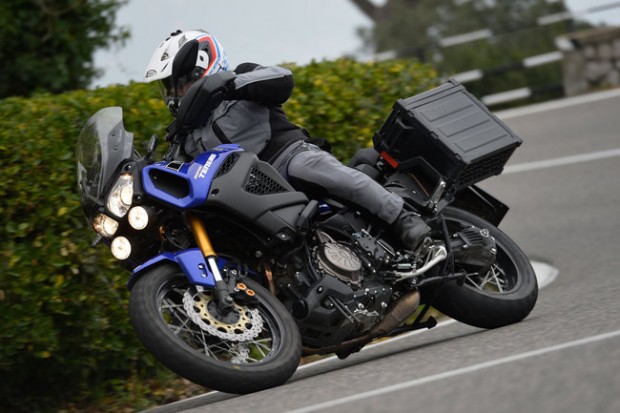 As comfort worthy of the most excellent

Now back on the Neapolitan coasta and Kilometers scroll between stealth thanks to the generous torque twin become more willing to common gaits overruns and a very neutral behavior erases bends easily.

The braking curve does not completely freeze the direction and the big Yamaha trail remains operable. Raises in turn reveal a slight uplift in the shaft drive, but it is very content. Yamaha XT 1200 Super Tenere agrees to up the tempo within the limits imposed by its ground clearance and weight during hard braking.

The sporting use remains the prerogative of 1190 KTM Adventure, Ducati Multistrada 1200 and other like Aprilia Caponord 1200, the remaining Yamaha definitely geared more comfort and raid read our great comparative trails 2013. So, we appreciate the staffing range of equipment dedicated to tourism as heated grips, cruise control or the new, more protective bubble. Too bad the manual adjustment of the latter is also impractical and Yamaha did not bother to rework his luggage locks.

Dobropillya Evaluation-  It is close to the GS

If its general appearance did little suggests 1200 Super Tenere ZE 2014 suffered actual substantive work from the Yamaha engineers. The most dynamic and expressive motor and controlled suspensions are undeniable assets while standard features enhance driving pleasure and premium positioning of the XT 1200 ZE. 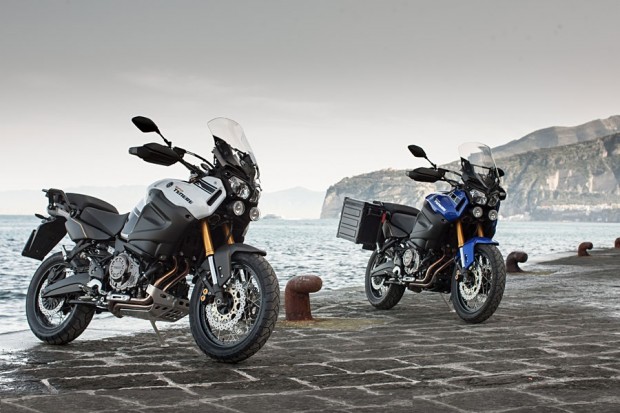 I hope you got a knowable info from this review and road test of Yamaha XT 1200 ZE Super Tenere and its beautiful test pictures.  Let us know your views regarding these images. Please post your comments below.