Historically, sports have become true inaccessible to young bikers. But in 2013, with the entry into force of the new A2 motorcycle license, appeared small sports for beginners. Not sad at all, affordable and economical here the game between the Honda CBR500R and Kawasaki Ninja 300! 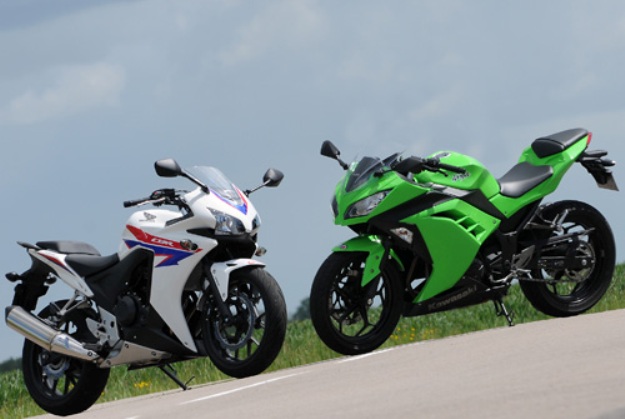 During our comparative of approved cars with a small engine A2, we sensed that new Kawasaki Ninja 300 would meet faced with a rival of choice sooner or later: the new Honda CBR 500 highway. Oh well the day J arrived. First official report: if Kawasaki Ninja 300 is irrefutably prestige with its paces of tiny ZX6-R, she remains emotionally cheaper than Honda in static.

Honda CBR500R is strictly meeting with dressing perfectly nested elements. Note that these two innovations are not assembled in Japan, but in Thailand. A strategic choice dictated by the fact that Asian markets are fond of these bikes, which are high-end figure. But also helps relieve the Japanese factories in favor of factories cheaper in terms of labor.

But let us return to our small racing cars. In terms of reception on board, the differences are accentuated. Honda CBR500R is more resting, its half-handlebars are raised, its saddle is less inclined… in short, the position of Honda is announced more relaxed and it will be an asset with the daily newspaper. 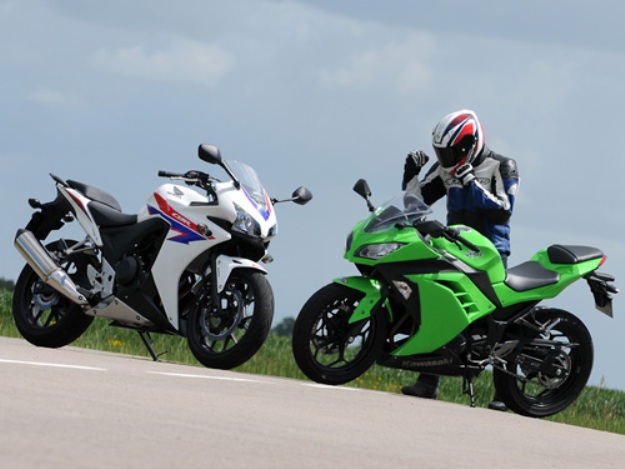 They make equal game in city

The two parallel twin-cylinders finish heating nicely while we adjust our gloves. In spite of its deficit of 175 Cm3 – what is important all the same for motorcycles of less than 500 Cm3 – Kawasaki Ninja 300 does not make figuration? Note, however, that our test model is equipped with Leo Vince exhaust approved Kawasaki available in the catalog. The Honda sounds in a more serious tone, but surprise, the engine seems to have less inertia than the Kawasaki block!

The sequence of grip is of paramount importance for these two machines that will take on the role and endearing first motorcycle. During maneuvers without using the engine, Honda CBR500R can not hide his overweight (22 kg more than the Ninja), but as soon as you drive it again in part the delay. In the city, where the average speed is low, the handling of each is tested.

Impossible then to decide between them: if Kawasaki Ninja 300 is indeed lightest – side data sheet as with control – its ergonomics plus sport and its larger radius turning penalize it. \n Side approval, the two motorcycles compete, with successful gear boxes and suspensions ready to digest the damaged road surfaces. Certain more expensive motorcycles are not suspended better, than it is said! 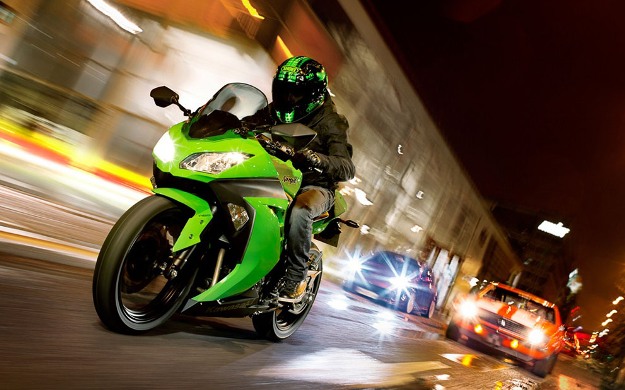 Honda CBR500R benefits from its couple

In the attack of the freeway, we note immediately that, in spite of their tab A2, our two settings can borrow the way most to the left without complex. It is besides a confirmation for Kawasaki Ninja 300 which accepts without problem to show in 130 km / h without having to change down. Rather well for one 300!

At this cruising speed, it turns to 9000 rev / min, while the rev counter – delicate with reading – of Honda CBR500R indicates approximately 6100 rev / min approximately. This variation of mode brings more in comfort of control to the ‘gross’ Honda which less seems to suffer from prolonged stages. But as the Kawasaki Ninja 300 can take more turns, it does not really give the feeling of crunching at 130 km / h meter. Better the little Ninja manages to stay in contact with the Honda CBR500R in the current times.

Less powerful and couple use on paper, Kawasaki is also less heavy. The concept of weight ratio/power takes here all its direction and the performances of Kawasaki remain honest vis-a-vis Honda. There is only under the more demanding conditions (goings beyond in coast, recoveries with less than 4000 r/min…) that the small sporting green brands the step. 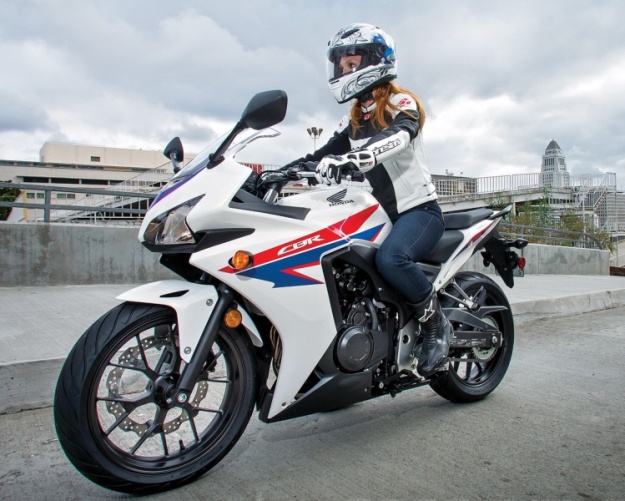 Kawasaki Ninja 300 shines of sporting use

But she did not say his last word. After a session of unforgettable aspiration on the freeway, where it has of bow of a small length, Kawasaki Ninja 300 finds colors on the snaky departmental babies. There, it shows a philosophy and a potential everything to the glory of the descendants Ninja.

Sportier position, it encourages the attack. The geometry is sportier than the Honda, longer but more closed direction, but then Kawasaki has completely its smaller weight to play all the corners. Like Honda, Kawasaki is very healthy, but it tightens inside corners more easily. Course corrections are easier aboard the Kawasaki.

Under these conditions, the Ninja 300 makes you want to seek the high speeds of the little engine that sings generously beyond 7500 r / min while the Honda is more linear. In short, it is totally fun to violate this little character full of sports. Quietly, Honda CBR500R can take the initiative thanks to a bluffing equilibrium: the upper inflexibility in that of Kawasaki, more progressive behavior when the motorbike registers and gets up again in curve, held by cape in the big curves the lightly upper. There still, both motorbikes are held in a pocket handkerchief, but let us say simply that Honda CBR500R accepts sports behavior without problem while Kawasaki encourages by its lightness and its furious motor there. 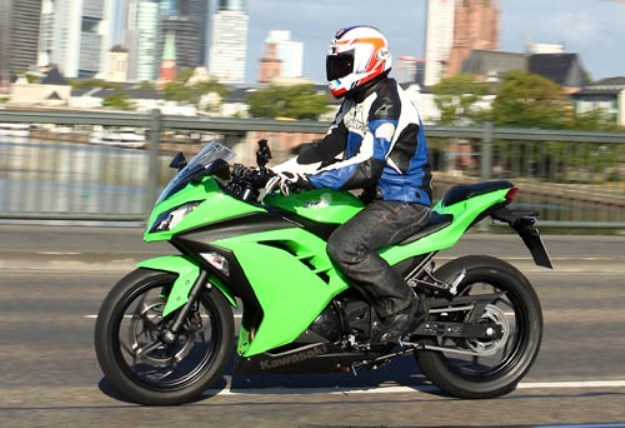 But the pleasure with motorcycle, it is not only to devour one portion of turns on three kilometers or to push an intermediate report in red zone. Approval with the daily newspaper, the versatility of use, and comfort in all circumstances are as many ingredients which transform a good motorcycle into an attaching motorcycle. \n for this reason, Honda CBR500R gains the part.

On Highway, it protects better. It offers a much more comfortable passenger saddle and true handles against elements molded into the body on the Ninja. ABS is present in series and fitted with Dunlop D222, it does not suffer from tires of origin at a discount as the Kawasaki.

The couple, the driving brake, and the total roundness of the motor of Honda are superior, what will allow him to confront long courses more easily or to make forget in cast behavior. In brief, she offers it more and will be probably a long-term more engaging companion. 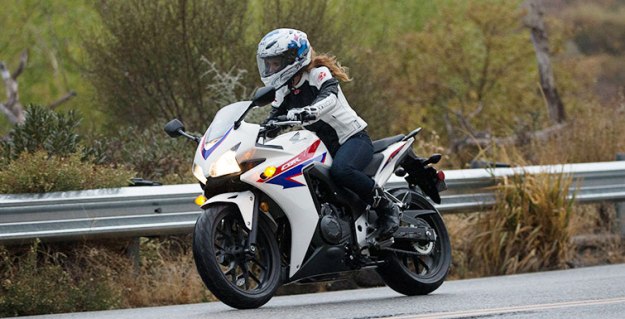 Assessment: The other general practitioners should react!

After this confrontation, the Honda CBR500R is required with a complete package that allows him to score more points. Sold € 5,990, it costs € 391 more than the Kawasaki Ninja 300 ABS. Minimal price difference at the time of choice.

Side tariff, Kawasaki should also make an effort on the impact of the price of the ABS on his Ninja 300 option because ABS is charged €600: as on a Z 1000 sold more than €12,000. However, the Kawasaki Ninja 300 remains a straightforward success: small sporting a sparkling wish.

Like widening the debate, let us underline the good idea of Honda and Kawasaki to propose such machines which give much pleasure while being accessible in piloting and economic to the purchase as with use. The other manufacturer’s general practitioners should take as a model of it! 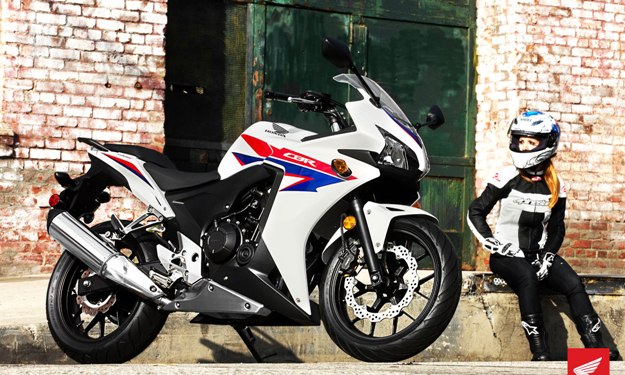 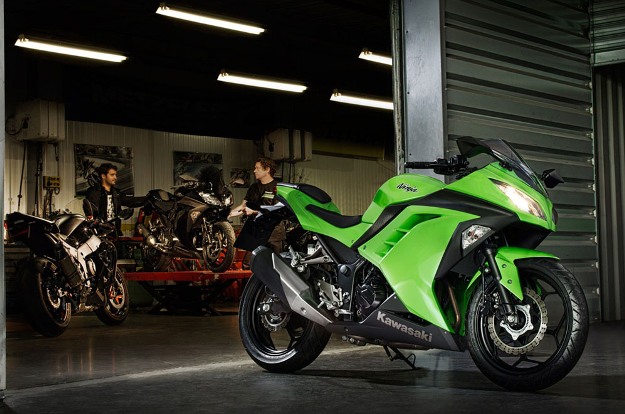