To replace Elystar 125 on the segment of the GT compact, Peugeot presents CityStar 125i to us. More affluent and powerful that its predecessor, this two-wheeled vehicle appears particularly adapted for an intensive and daily town use. But what is it really worth? bikesdoctor has just tested it and returns its verdict. 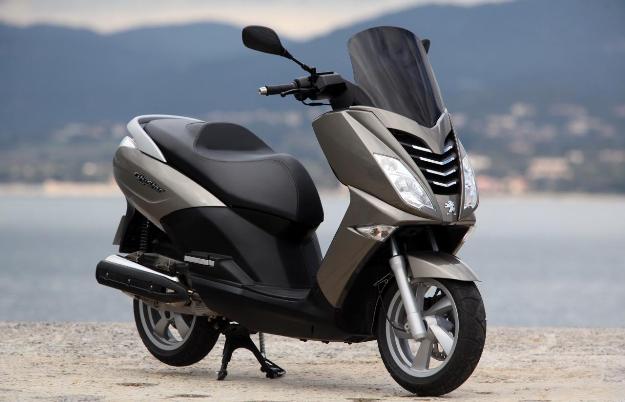 For two years, Peugeot had not laid out any more a compact GT within its range; Elystar (exceeded?) which has taken its leave in 2009. In family 125 of the struck classical scooters of the emblematic lion Sichuan, thus a reference between Vivacity and Satelis missed. CityStar comes to fill this gap. But rather than simply to occupy a vacant ground left by Elystar, Peugeot raises the quality of its product, while preserving its philosophy.

The goal is to propose in its heart of target (mainly of the men between 35 and 40 years, townsmen, pertaining to the category of the average and higher CSP) “a small” vehicle of Great Tourism, cheaper than true the GT of the market. The practical aspects and the handling of this alternative must be a good notch above small scooters, in addition less well equipped and handicapped on the main roads.

CityStar which is presented to us today has already a style and a design incontestably more current than Elystar. The Machine tempting, aim for as much, is one do find approval That One promised to us on the dynamic level? 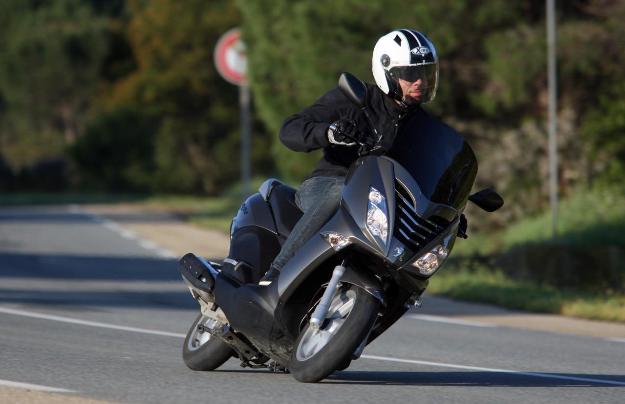 Good lengthening-piece, but not very swift in recovery

In terms of ergonomics, one finds on CityStar the same type of fitting as on Elystar. The saddle remains always high (795 mm) and its width obliges less than 1.70 m to play of the points of feet to be maintained with the stop. With the floor, there is place, even for the great sizes.

On the other hand, one cannot extend the legs and to adopt a “relaxed” position, like that is generally practiced on the GT category. On CityStar the position of control is right, but it appears to us with final not very tiring thanks to the good positioning of the handlebar. The catch in hand of the orders is obvious and the legibility of the perfect instrument panel.

No kick to launch mechanics: this new scooter having one-cylinder injected, it is with the inch right related to the button of the starter that one awakes his engine. Not very noisy, it is shown also not very vigorous with starting. Like Satelis, force is to note that CityStar is not the first to take off with fire. The machine is caught up with thereafter by providing a progressive and linear acceleration. We deplore a certain lack of plume in recovery.

Not with the town paces, where he answers always present, but rather when it is necessary to start again the machine with 70 or 90 km/h, of the key stages to exceed on fast track. On the other hand on this same highway type, its lengthening-piece is an asset. On our model of test, we recorded a top speed close to 125 km/h to the meter, that is to say 113 km/h real. 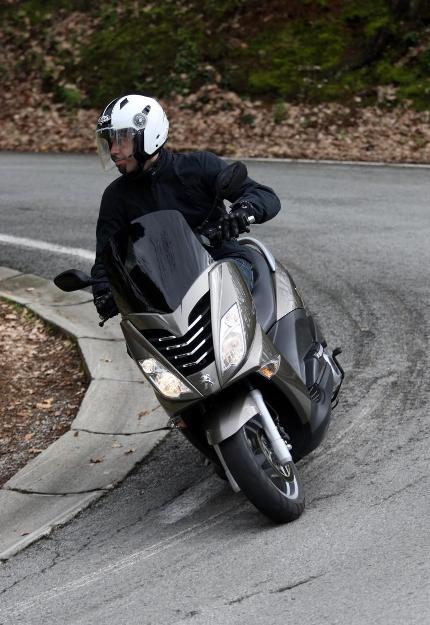 Handling worthy of the GT category

In terms of protection, the bubble starts to lose of its effectiveness last 60 km/h. That being to lead Citystar to high speed is not therefore uncomfortable. It should be said that the pilot is well installed and that the suspensions show progressiveness.

CityStar enjoys a remarkable handling and appears reassuring on the angle. This promptness in the fast changes of direction and this stability in turn, new Peugeot also owe it with its wheels of 13 inches fitted of top-of-the-range pneumatic tires. The compact GT obtains indeed with Michelin Pilot Sport, the tires with rather tender gum, declined here in specific faces, with a tire before narrow (= agility) and almost a low size in the back.

There is no assistance with braking on CityStar year 2011 (2012 will have to be waited until to see itself proposing the option). No braking coupled or ABS thus, but a corrosive… and not very progressive whole with the front one. As a result, while requesting a little extremely the lever, the fork plunges and reveals its major defect: certain doubled softness of a light lack of brake in decompression. In sport mode, that feels when one catches the brakes before entering in turn, but in 95% of the cases, that does not affect any control. 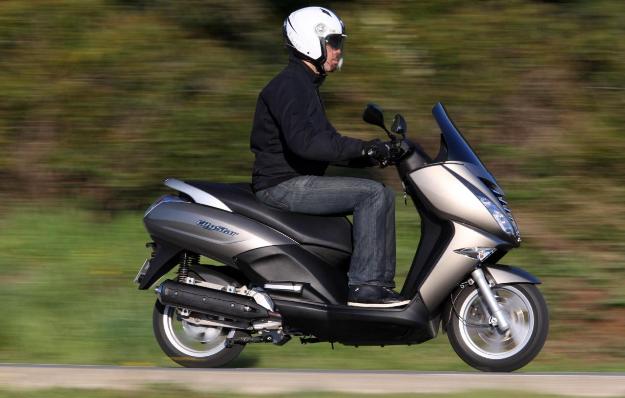 There is of Elystar in this CityStar

At ease on the fast tracks and the small winding roads of the south of France, we now return downtown to judge behavior of this mini-GT in urban environment. This presentation being organized in Saint-Trope, the small paved streets of the center of the city will constitute an ideal framework to measure the handiness of the scooter.

Under these conditions, as of the first turns of wheels, a report is essential: there is of Elystar in this Citystar. The scooter directs with 45°. Leger, not very broad, equipped with a short footing and a good motricity, it takes himself along instinctively and threads without evil. More livable in the exercise than the classics GT (Peugeot Satelis, Yamaha X-max, Suzuki Burgman, Honda Swing…), more accessible also, it is shown however a little less practical than these Pullman on two-wheeled vehicle.

However, its services are honorable since one can put two helmets (integral and a jet) in his trunk. There is much place to the floor for posing possibly there some bags, firmly fastened thanks to the hook of the apron. CityStar is also equipped with a roomy vacuum-pocket being able to accommodate a water bottle of one liter. Two crutches make it possible suitably to park it. Finally against the flight, CityStar is equipped with a key with transponder. Beautiful equipment! 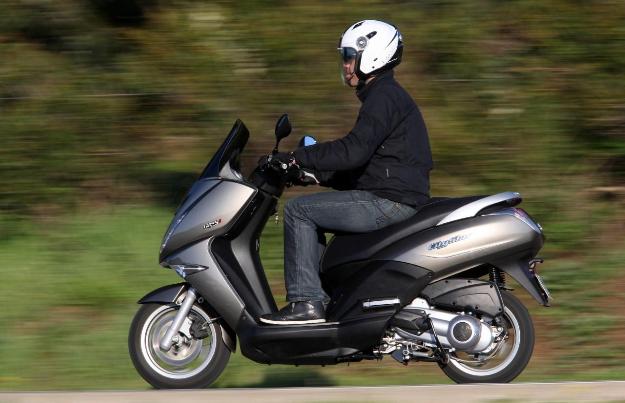 With Peugeot CityStar 125i, Peugeot aims just. If this compact GT can provide the same services only one true GT, it offers some enormously on its crenel. It is practical, has of undeniable dynamic qualities and top-of-the-range equipment (instrument panel, halogen lamps…).

Its look could lend to discussion, in particular on the level of its front face. However, this compact GT signed Peugeot is much more affluent and developing that fire its Elystar predecessor. Its manufacturing is irreproachable and the design of perfectly fashionable automobile inspiration. No doubt that it will like, more especially as its purchase price seems to us judiciously placed: 2,990 €. Its low fuel consumption (announced to 3.5 Li. /100 km) is another argument going in this direction. 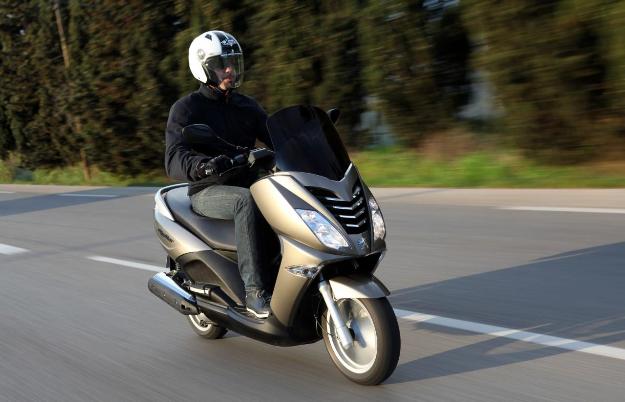 Thus, Citystar gives the category of the GT compact to the last style. In the current context of thickening of the centers and especially of soaring price of the fuels, this family (in the past dominated by Yamaha Majesty 125, which disappeared this year) could be the category with a future. Consequently, new the Star of the cities could bear his name particularly well 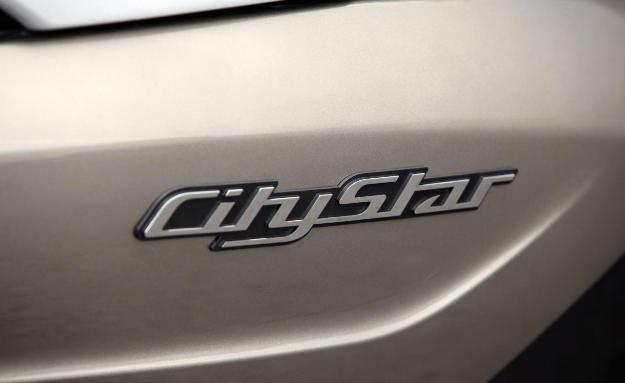 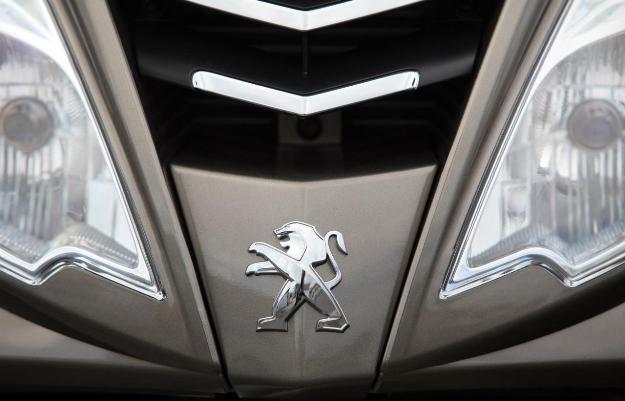