There is many brands of motorcycles passing of 100 years and that are exploiting the link  with the past as Indian. To put the icing on the range of 2015 Indian Scout gets renewed, the new access to U.S. brand from 12,990 Euros in Spain. New Scout drinking from those of the 20s of last century, although update is a 1200 cc custom searches lightness and price content strengths. It is the first V-Twin engine liquid cooling in the history of the brand, specifically of 1,131 cc and 97 Nm of torque at 5,900 rpm.

Alongside his Kerb weight of 253 kilos is a suitable alternative for those seeking a charming custom bike to enjoy alone. A Scout update Like their sisters Victory both owned by Polaris has a cycle and own equipment part XXI century, as the aluminum chassis with integrated air intake, 16 inch tires, double rear shock, brakes ABS standard (298 mm disc on both axles), cruise control, key less start leather seat or just 635 mm above the ground.

If we add a front fender, tank and color palette like Indian Red, Thunder Black and two shades of gray in line with the traditional Indian DNA we have one custom with own personality without improvements in recent years.

Here are some beautiful Indian Scout pictures in gallery just check them. 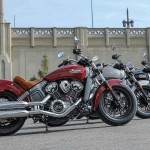 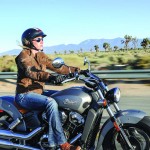 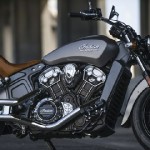 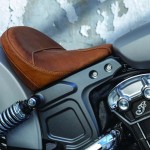 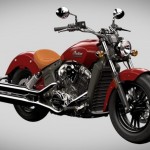