Honda is one of the few to offer a nice evolution of its top of the range sports in 2014. With this SP version of the Honda CBR1000RR, the first global manufacturer demonstrated once again its know-how without denying its philosophy.

While Leon Haslam, the Superbike World Championship driver, please, just let me ‘brakes’ at the end of the straight line of the Losail circuit, it comes then a flash (the one referring to the memory, not so joyful grey metal box): end of 2011, the project leader of the Honda CBR1000RR Fireblade had yet confirmed to me that this generation would be the last meaningless ride by wire and other control traction…

Two years later, the sports range top of the leading manufacturer is still lacking. However, the question may arise: are all these aid in the cockpit of a motorcycle really essential? How many amateur drivers and experienced, are still rolling on old sports of 10 years or more, devoid of all the latest high-tech frills?

Today, it more than 25 ° c on the Losail circuit, the Pirelli Supercorsa SP tires heat up like eggs on the flat. Now let’s see what offers this Honda CBR1000RR model SP 2014. 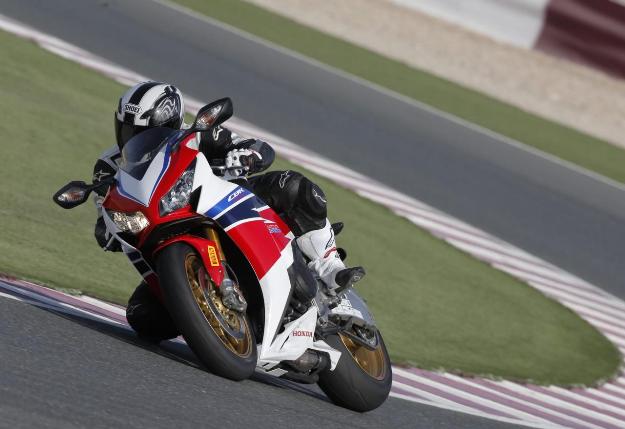 It sold not less than 215,000 Honda CBR Fireblade in Europe since 1992… Even if the ‘blade of fire’ is no longer the sport of choice for the French, it remains popular in Europe, despite the decline in the sports market. It must be said that it is still a very nice bike, and further this Honda CBR1000RR SP.

Quality of materials, rigorous ultra Assembly, carefully painting, the sporty Honda 2014 is magnificent. It appears even racier in this livery SP, proposed strict single-seater, with a rear frame loop magazine and wheels in the color gold. Once the developments 2014 summarized during a quick briefing in the press room, we are invited to take the handlebars. 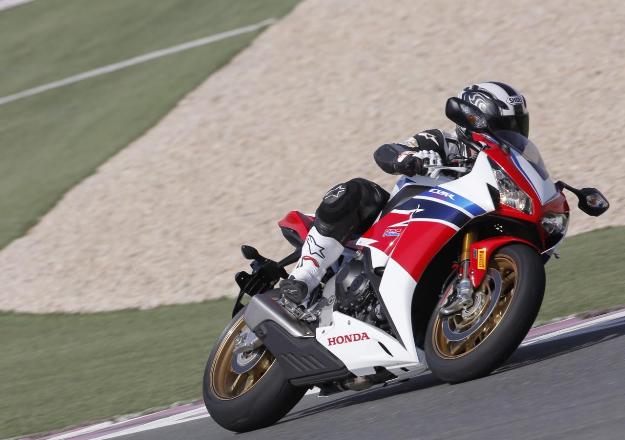 Engine heat, Japanese and English technicians deprive blankets of tires, the heart beat accelerates, and it is time to go discover this Honda CBR1000RR Fireblade SP, and the Losail circuit at the same time (which will be not easy, believe me). Firstly, the riding position which is evolving towards more sportsmanship on this evo 2014, logically facilitates the piloting on circuit.

With more support on the wrists, on more instinctively switches the upper body while evolving naturally against or around the tank. The saddle, announced 30% more firm for more feel the work of rear suspension (what strange change!), will not be out here thanks to the many movements of the body.

In the end, this evolution of the ergonomics of the Fireblade 2014 arrange may not be those that roll on a daily basis or on the road only, but this is probably not his goal. Because on track this time, two towers are sufficient to take its trademark aboard Honda CBR1000RR model SP 2014, it is guide to instinct, moves with precision, its geometry appears hyper neutral (not stiffness, progressive tilt, no surprise). It already is a quality. 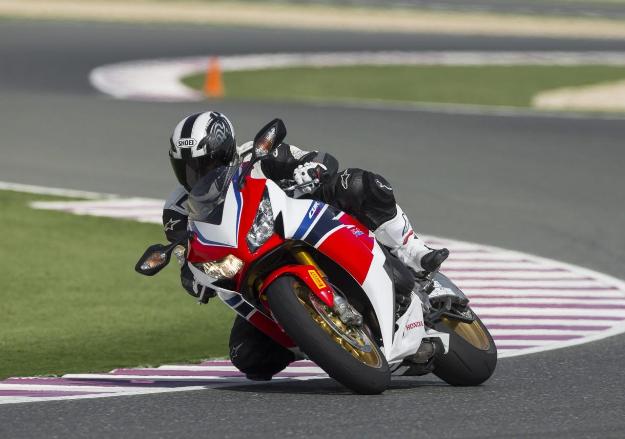 Learn the layout of the Qatar is not easy, but fortunately, the Honda CBR1000RR Fireblade SP will be shown a valuable ally. His part-cycle combines, with rigor and an exemplary approval, agility and stability. Two a priori incompatible qualities but which join here with a great success. Thanks to his sides and rigidity optimized chassis, it has one of the best balances of hypersport plateau.

Agile, the Honda CBR1000RR SP agrees to turn easily in small corners, tighten a path without making too feel ‘its 1000 cm3 overweight’. Also, found this faculty to stall on the corner. Once in place, the bike no longer moves. The more or less long, neutral phases depending on the level of the driver are then digested very reassuringly.

But all these aspects, we already knew them on the previous model. This version SP of the Honda CBR1000RR 2014, equipped with beautiful Oh lines suspension, adding a ladleful of precision. Roadway tire racing (the Pirelli Diablo Supercorsa SP then the SC), Honda CBR1000RR SP then presents a guide of any first-order. We place the train forward with great precision, and this, whatever the speed of movement. Rigid until the end of the gums, the new Fireblade tends its paths and seems to follow an imaginary rail. The ‘fire blade’ became scalpel. 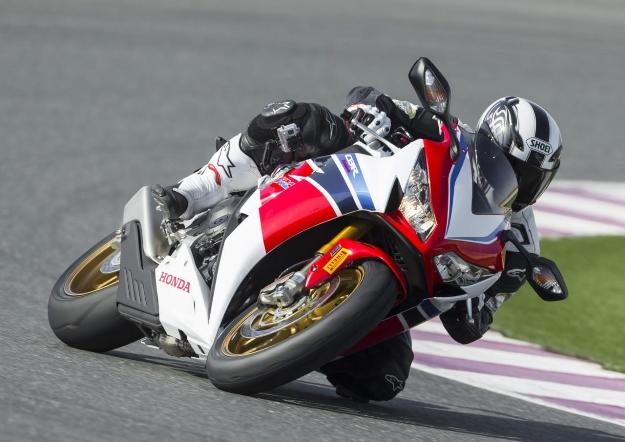 A brake to the Rambo

What is pleasant and participated greatly in the performance of this Honda CBR1000RR SP 2014, it is the consistency of its high equipment range (suspensions, brakes), even in critical phases of flight. Example, you miss you brake, mass transfer will be more content.

Similarly, one of the changes in support of the circuit requires crossing small bumps, but traction is excellent while the noticeable rebounds in the handlebars do not alter the trajectory. Net, the suspension better absorb the constraints, although, from experience, we know that the standard Showa demerit not.

However, the SP 2014 significantly increases the level, better damped and braked in movements parasites, with the key more precision, stability and agility; a treat the affected runway Swedish! Sebastian Gilbert, or recruited by Honda for 2014, says himself, it will keep the suspensions and the CBR SP series calipers for his season in France Superbike Championship. And when we know it plays the win…

These new Brembo radial-mount monobloc calipers do not in lace at the end of the straight line at Losail. The power of deceleration it shows impressive Imperial stability, the work of the electronic ABS helps to keep the rear wheel on the ground.

Pity that the Honda CBR1000RR SP destined for the French market are probably not delivered with the ABS, but Honda France confess us again study its strategy of import on this point, as well as the fee schedule.

Finally, it will be this damn self-preservation that will have the last word because the Honda CBR1000RR SP 2014 always seems to be able to push the Panel Guide ‘too late’. Stress despite all a small flat at the level of the feeling felt to the lever. Little of it was sometimes difficult to determine, for example, on the released. The Ducati Panigale (899-1199) is doing better in this area. 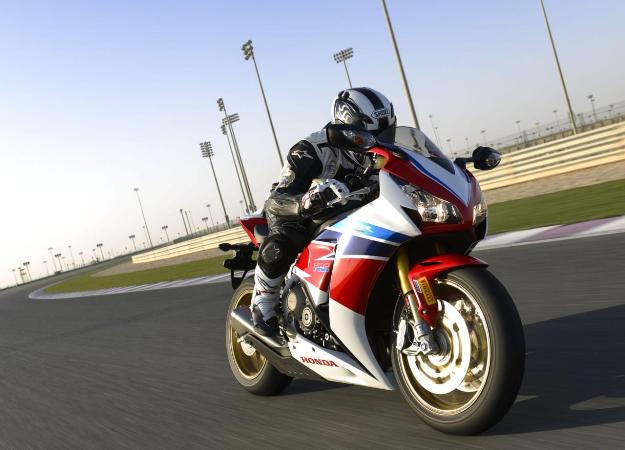 4-cylinder efficient but not very expressive

Fifth round, straight line scrolls, the 5th report allows taking more than 270 km/h, and there is little time to pick up the sixth. It is always impressive, a 1 000 hypersportive such the Honda CBR1000RR SP, growth of the fire of God in free version. Strong 180 hp, the Honda has what panic chromo and all radars of the nation on a simple acceleration.

The performance of the 2014 vintage gain (better 2.7 ch) is more than difficult to appreciate. Side expression, changes resulted in the arrival of bearings in the acceleration. Flexible under 4,000 rpm, mechanics presents a first peak of torque between 4,000 rpm and 6,000 rpm, and then from 6,000 rpm to 8,500 rpm, 4-cylinder offers a nice consistency and provides its power up to 12,500 rpm, a little before the switch.

This engine is full as an egg, with a nice extension, all in an almost typical linearity of the Honda and muscular at midrange. On the side of performance, there is shortage of nothing. Approval, it is almost all good apart from a slight kicker by passing a new peak of torque to 4 about 500 rpm. However, even if the giant track of Losail participates in leveling the sensations, what characterizes the sporting temperament of a motorcycle remains indented on the Honda CBR1000RR SP: The air box and exhaust are little sound, the acceleration is linear, even the light shift – by its small lads – proves to be discreet. In addition, on this version high-end sporty Honda, we were several to regret the absence of a shifter, which in addition to its effectiveness assessed under certain conditions, further adds to the mood on this type of machine… 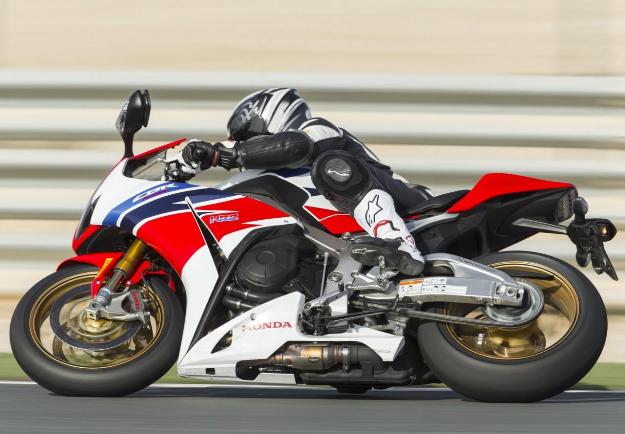 Superbly assembled, class and stylish in this SP definition, Honda CBR1000RR model 2014 remains a fantastic bike. Boasting a stunning balance, it brings a lot of approval sports flying, to the extent that it can be an excellent alternative route / track in regular use. In keeping with the philosophy of the brand, it will thus progress without too much to exceed its ‘high’ by some cycle too typed or unmanageable engine in free version…

If the schedule is not set, Honda announced prices ranging from 14,000 Euros for the Honda CBR1000RR 2014 standard without ABS more than 18,000 EUR for this Honda CBR1000RR SP version. At this price, the competition is stiff, with more sophisticated and/or expressive motorcycles, but probably less wisely positioned between passion and reason. 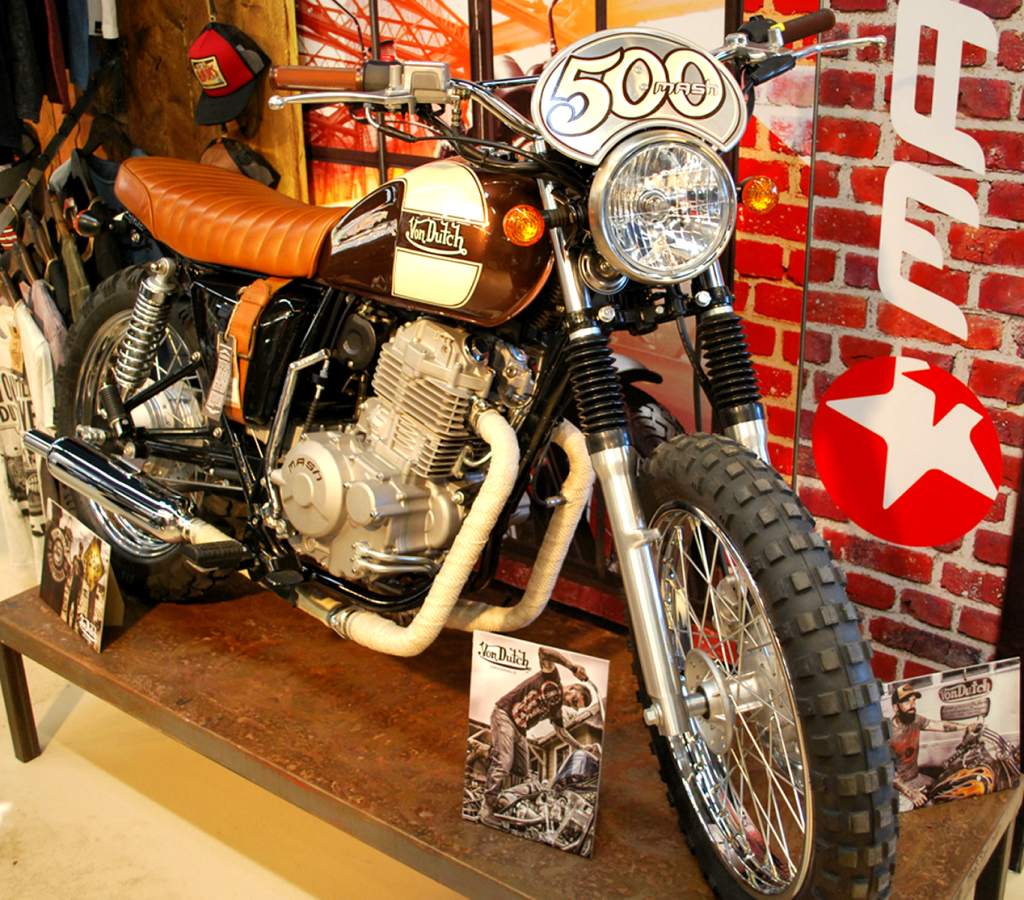 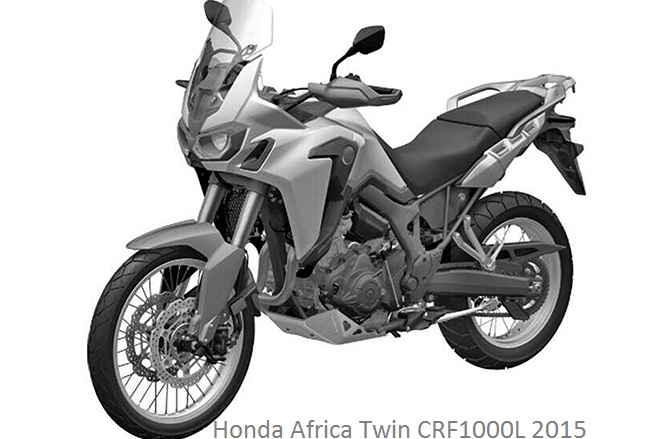