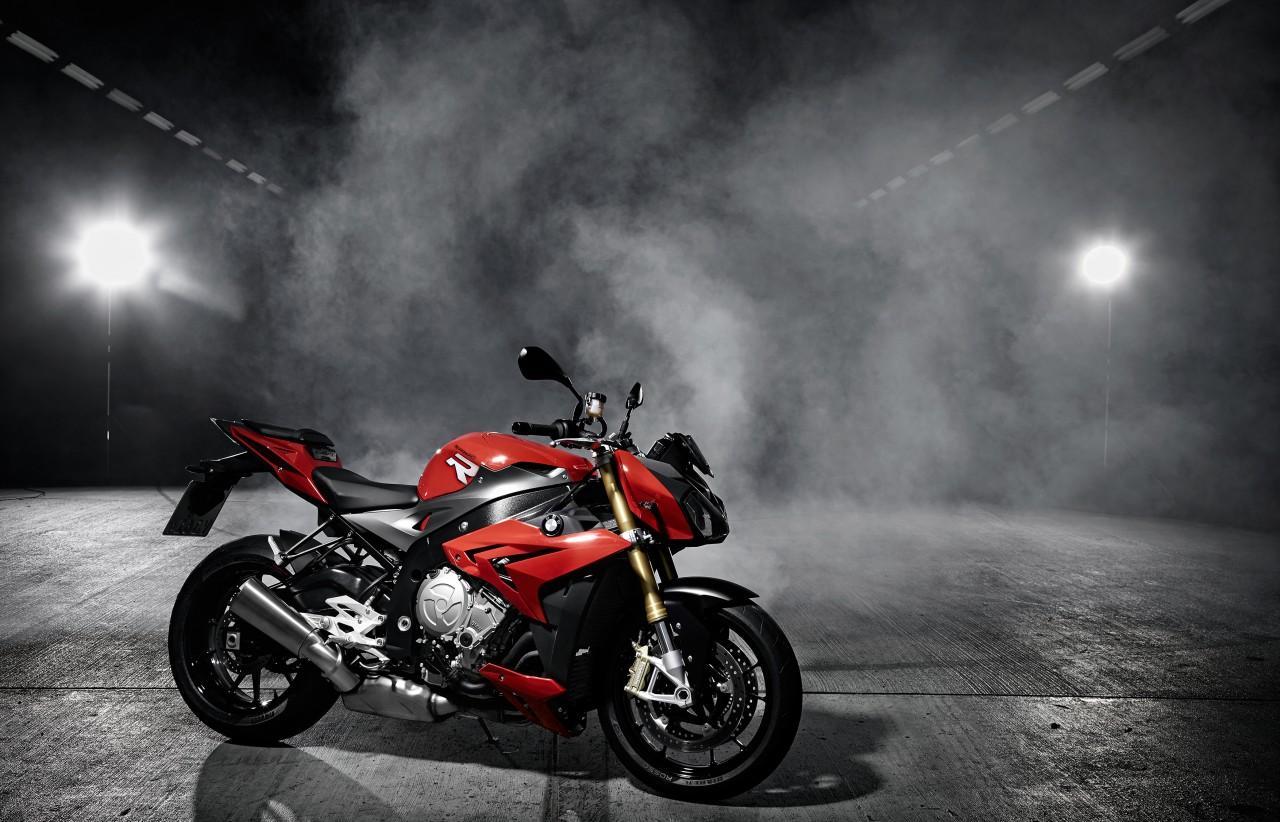 The BMW S1000R resumed on 4 cylinders of 999 cm3 of the sport S1000RR Structural Element of the chassis, this block tilted to 32° is supplied a system of phased injection, fully sequential, with two injectors per cylinder. However, cylinder head, internal pipelines and lift of cam curves differ, as also the profile and recent material (exit titanium). New ignition coils and new position sensors are other changes in the electric and electronic system.

In fact, filling the engine would be better low and midrange. On a comparison of power curves and torque provided by the manufacturer, there is indeed up to 9500 rev / min, the roadster offers superior athletic performance. The maximum speed of the BMW S1000R 2014 is reduced from 2000 rev / min. With the management system BMS-X (BMS-KP on the BMW S1000RR) engine, the roadster has a ride by wire.

The exhaust line is identical, as the final drive and 6 box reports. The shifter option is also available on the BMW s1000r Stefan (Project Manager) and Sepp Machler (Product Manager) we were entrusted completing two years of tests and trials before validating the project for marketing. 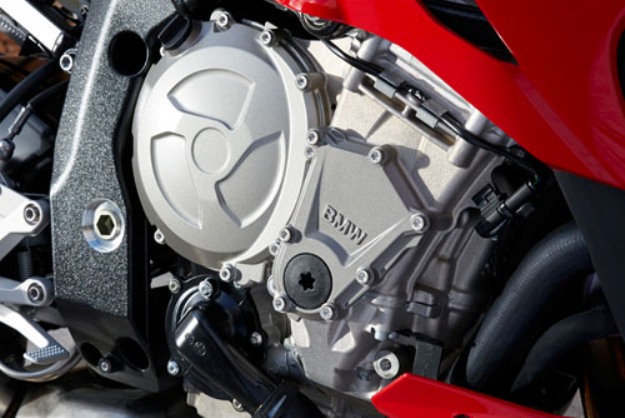 Standard staffing, the BMW S1000R inherits from two injection maps: Rain and Road. Dynamic and Dynamic Pro modes are part the DTC option or the Sport pack. In Rain mode, BMW produces 136 horsepower. Tested in extreme conditions by us, we confirm that it considerably wiser this engine. Race ABS and ASC traction control act early.

In Road mode, we find values power and maximum torque. The intervention of the Race ABS on the front as the back is identical to the Rain mode. Same goes for the anti-wheeling and the lifting of the wheel sensor rear, if the machine is equipped with the DTC in place of the CSA. The level of traction control is lesser, unlike the operation of driven suspensions (SDC) identical to mode Rain in Dynamic mode; the answer to the acceleration is more direct.

Race ABS action threshold is raised and the lifting of the wheel sensor rear off. The intervention of the motor control is later. The system allows easier separation of the front wheel.

Finally in Dynamic Pro mode (which is activated by inserting an encode plug), ABS works without detachment of the rear wheel sensor. More assistance only works on the front. The answer to the acceleration as the behaviour of driven suspensions is in the Dynamic mode. The anti-wheeling disappears and the interventions of the DTC are still later. 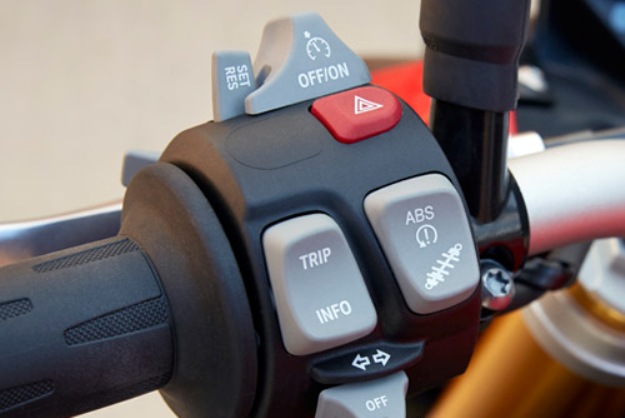 The perimeter aluminum frame weighs only 11.98 kg. It is the junction between the big hits an inverted 46mm fork and monoshock at the center of the swingarm aluminum identical to the S1000RR sport elements, such as the steering damper. The suspensions are fully customizable.

The geometry of the roadster differs from the sport: at the front, the angle of the fork is closed 0.8 °, while hunting increases by 5 mm. The 1,439 mm wheelbase is extended to 22 mm. Another difference from the S1000RR, an anchor of the arm is lowered, with mounting of the shock absorber in the lower part. Aluminum rims, calipers brake Brembo 4 piston and the BMW S1000R 320-mm discs are identical to those of the RR.

Optional, BMW S1000R 2014 can be equipped with dynamic damping control, a system of controlled suspensions appeared on the S1000RR HP4. This DDC adapts to different maps available on the roadster. With this system the depreciation is adjusted (compression and rebound) electronically in a few thousandths of a second, via a valve in power management.

Series roadster is equipped with Race ABS BMW (2.5 kg.). The degree of intervention of this brake assist, full front only when approached, is set according to the modes and can be disconnected at any time. 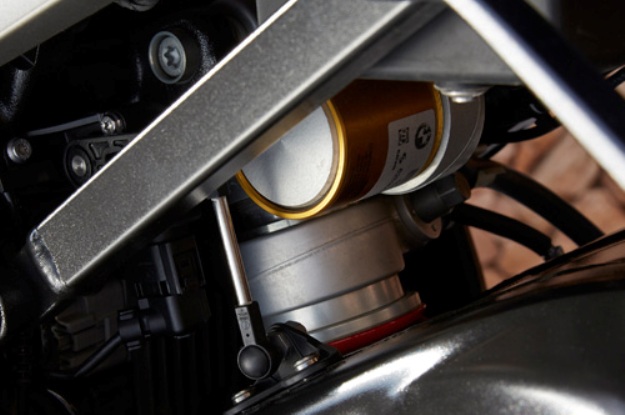 BMW S1000R 2014 enjoys a careful manufacture. It is a beautiful machine, quality paint and high range equipment. The integration of the commands is good, even with multiple buttons our test model all options.

The instrumentation almost identical to that of the S1000RR has a large LCD screen installed on the right of the tachometer needle. In addition to conventional information it provides information on the gear engaged the selected mode, fuel level, autonomy and functions of the onboard computer.

In addition to the specific use on tracks features are also available (lap times, braking percentage …). Note the presence of an adjustable shift light. 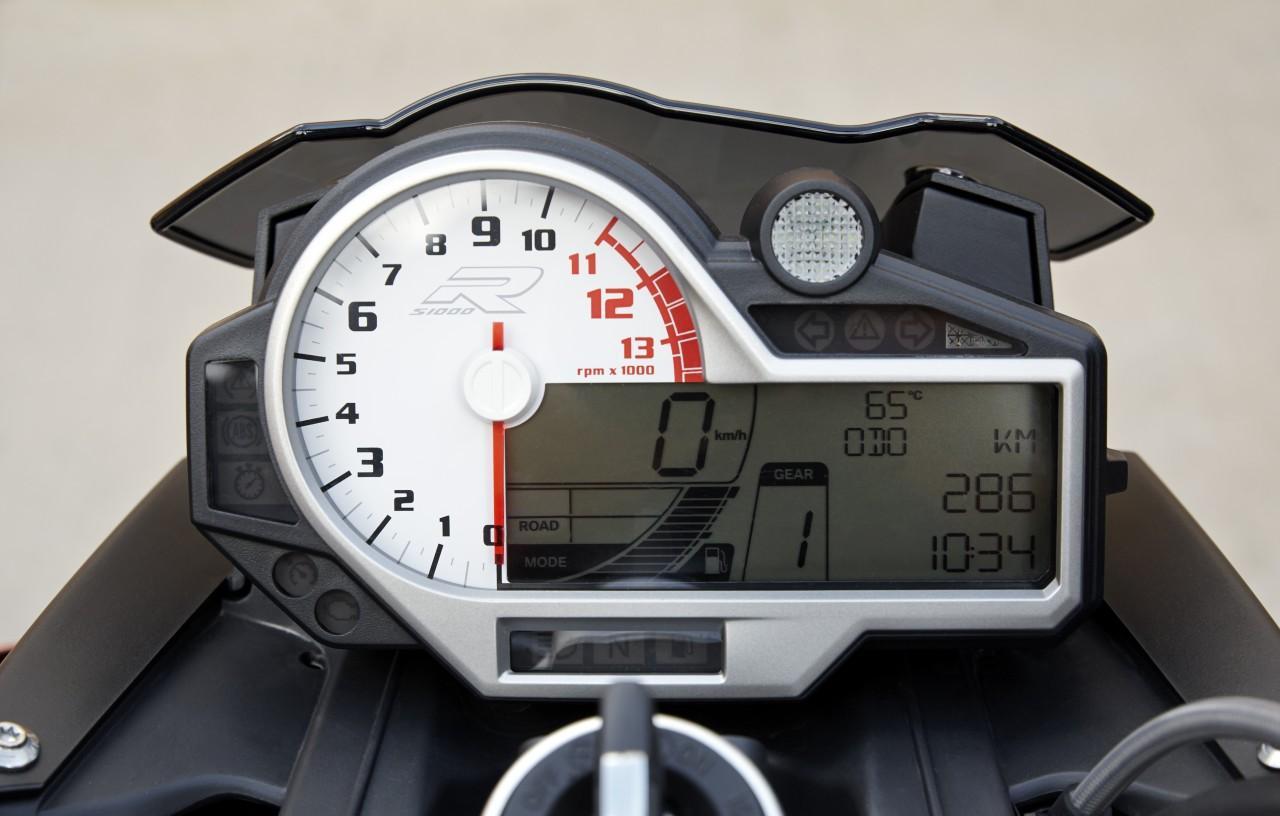