So far we had seen several models of three-wheeled scooters, but no one had dared to produce a three-wheel naked. After several advances in prototypes, Yamaha is launched in the pool with the spectacular Yamaha Niken, the new member of the MT range but with a revolutionary formula that will give a lot to tell. 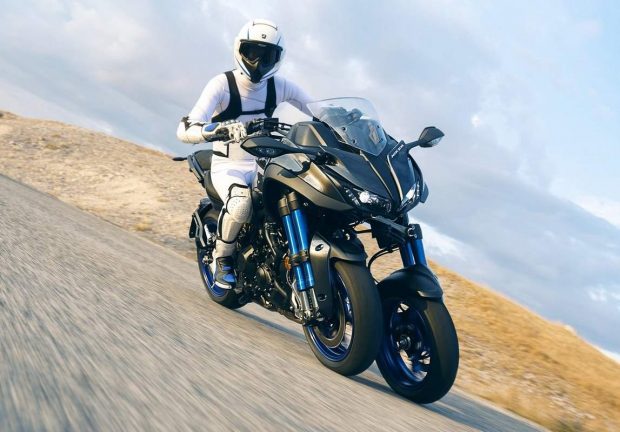 Also in The Tokyo Motor Show delivers its nuggets at this time … Here is the Yamaha Niken, a MT-09 with 3-wheel base, probably licensed soon after B. .. 1a infos!
Currently presented in the Tokyo Motor Show, the Yamaha Niken introduces without a doubt another form of motorcycle that will no doubt remain isolated. Because here is the first series “real” of 3 wheels of large motorcycles, large displacement, a priori 900 cm3, with a multi-axis direction that allows a corner inclined, like a classic of 2 wheels.

It was presented at the Tokyo Motor Show 2017, but it is only at the EICMA 2017 in Milan that we will know all its details.
It double-tilted Multi Wheeler (LMW), the most striking of Yamaha Niken is its front end, with a double inverted bumper of 15-inch tire fork housing. The philosophy is similar to three-wheeled scooters, offer extra safety when tilting the bike and more inclination degrees. Yamaha considers it to be particularly effective in aggressive driving situations or on irregular roads.

The Niken Yamaha moves with a four-stroke three-cylinder engine and fuel injection probably inherited from the Yamaha MT-09 and share design details with Yamaha’s aggressive MT-10. Definitely a bike that will give a lot to talk about and we will see if you can create the school.