Inspired by the prototype BMW Motorrad Vision next 100, BMW has chosen Concorso from Eleganza Villa d’este 2017 to present the design studio BMW Motorrad concept link. It is a conceptual Maxiscooter Cup that combines futuristic connectivity technologies applied to BMW motorcycles to work with.

It’s a 100% electric prototype that could look good in a sci-fi movie you can watch there, however we offering here some pics:

This maxiscooter decorated in the metallic titanium on the front and black shell in the rest of the body, including in the accents of orange color constrast for connecting tubes of the battery to the electric motor. It stresses, in addition to its tandem lenticular wheels particularly low flat seat to facilitate the access to the vehicle. Under this seat there is a roof gallery with a sliding door that replaces the traditional space under the seat.

The BMW Motorrad concept shows how link will be in a few years maxiscooters. Other notable design elements are minimalist LED lights in the front, additional panels that optimize the aerodynamics and on the minimalism of the rear axle revealing the single-arm toggle, the shock absorbed and the toothed belt. In addition, the design of the vehicle allows the customization of seats, side panels and windshields, chromatic variations that reach future scooters as is already happening in urban cars.

Connected and intelligent Scooter
In addition to studying this prototype design illustrating the BMW Motorrad link concept is a step forward in terms of connectivity and other equipment. In fact the instrumentation gives way to a large touch screen that controls all functions. You can project information from key information on the windshield to not lose both eyes, while the navigation system has the function of memory according to the personal use of each rider. The buttons are also touching the handlebars. 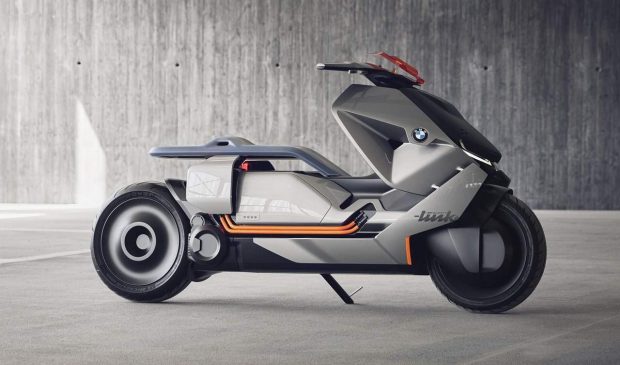 Finally BMW made a short coat in waterproof loden as well as protections on the shoulders and elbows carries the necessary technology for door luggage is a gesture movement of the garment sleeve.

Ideas that come in the future, hopefully it will be prove a non-prohibitive cost.