It is not the end of the two-wheeled scooters, but we need to start thinking about a future with scooters and bikes three and four wheels, especially in the cities. The Piaggio MP3 is the best known and there are cities such as Paris, where the streets are full of them. But it is not the only, the Yamaha Tricity is a small economic choice, light and rivals luxury models two wheels is permitted. brand Quadro Swiss has also a three-wheel, but the star is the Quadro4, the protagonist of this test contact 4-wheel scooter. 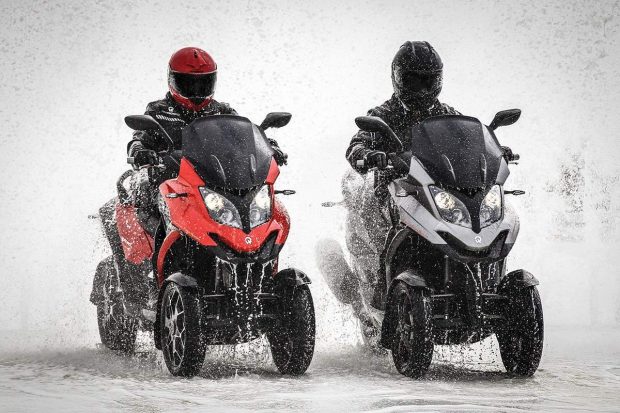 Sounds weird, weird, weird, but it is not a quad, but it has four wheels and can lead Quadro4 allowed car B despite having a 350 cc engine and 30 c. Its price is in line with the megascooter most desired, the Tmax Yamaha and MP3, namely €10.490 must be reduced to 9890 with the current promotion.

The Quadro4 has a clear goal, to be an alternative to the car to facilitate urban mobility offering security to high-dose and control easy, both launched in the world of the bike and for the uninitiated. After having tried and move forward you if you don’t shoot, I think that this scooter you can not fall.

The body conceals a steel tubular Quadro frame and a complex system of hydropneumatic suspension Yes, like the old Citroen is the identity of this brand and making it our best ally in the citizenship line. It allows you to reach 45 degrees inclination, a point that is likely to approach or of their owners, but if you go to curves and have experience in the motorcycle, it is possible that the scope. Then I’ll tell you how it goes and what you should do in this case. 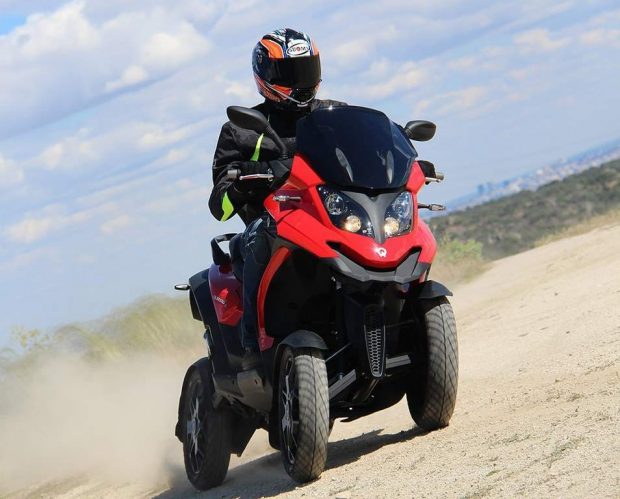 No ABS and is consistent with braking combined if the anchor can pull all your desire surely would not hurt a future version with ABS for critical contingencies and for rainy days now. Furthermore, the braking is independent at all four wheels, such as cars.

As I said, the engine has 346 cc and 30 HP, automatic transmission, differential, and secondary toothed belt drive, brand has no maintenance and lasts a lifetime. All four tires were the same size and, if the position in rotation as recommended brand, have an estimated lifespan of 14,000 km.

Not a featherweight, but with 260 kilos of maneuver much better than one might think at first. In addition, if the lies and will see that one side you drop gently and does not touch the ground. The suspension is on the top and on flat ground the scooter left inclinadisimo but not touch the ground.

The Quadro4 driving position is very natural, it does not require too much bend your legs and hands are intuitively to meet the handlebar. The passenger also has a good area to travel comfortably, two large handles and retractable footrests. 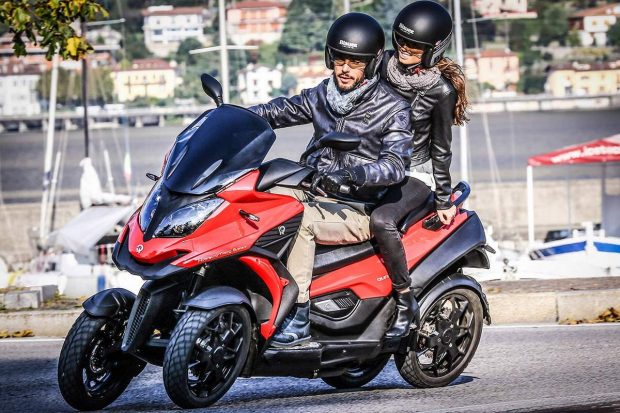 To recline up to 45 degrees

Dash has two large clocks for speedometer and tachometer plus a digital display with detailed information for the driver. It has parking brake position because it lacks is a lever on the right side of the seat which is operated and blocks one of the rear wheels, but we get time to suspension let go because it is a little rough. 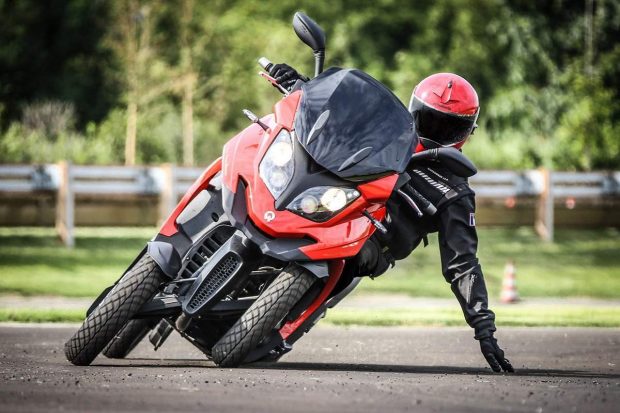 As the load capacity Quadro4 is a fair bit despite its size, but compared to the three wheels, we see that is more or less at par. It has a space under the seat for a full face helmet face and more, which unlocked drawer added behind the front shield was not able to open with gloves.
I’ll be honest, I had many reservations on the dynamic behaviour of this scooter, a nothing be clearly be able to switch smoothly and be a real alternative to a scooter with two wheels. Error! Not only it is strongly recommended for people with little or no experience in the motor scooter, also for those who have rolled kilometers on two wheels.

Security side dares even to slip on the floor

Logically the direction changes are a little slower than in a scooter with two wheels, but it is wrong a few kilometres, you get used to and forget about it. However, it is surprising to see how going through the bumps without affecting the direction, the suspension presents a huge uptake, road has not changed and does not only own rear dryness of the scooter.
In other words, is very comfortable and easy, but also exceeds by far all three wheels dodging potholes, because you can overcome leave them between the front wheels… and the back, and not three-wheeled hardik Patel them always with some of them. 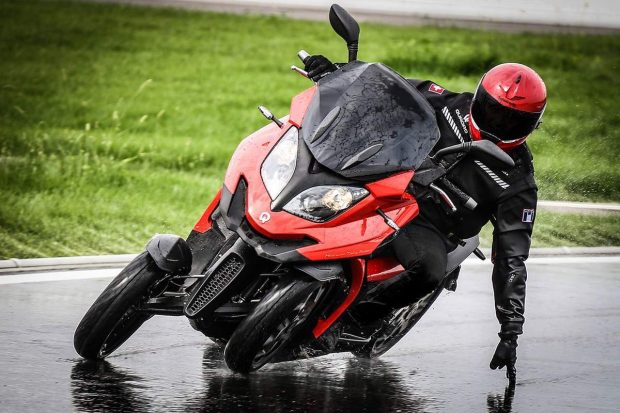 The borders are another hurdle to overcome in leaving stunned, you can even download diagonally so that the suspension works perfectly and allows you to carry two above and two below without any problem.

There is no electronic locking tilt MP3, but you can stay in traffic without disassembly. stop only scooter right and brakes are no longer falls on the sides. Of course, if you don’t quite get right, you will see that it is sinking slowly to one side and you have to put your foot on the floor to straighten.

And the engine? It accelerates smoothly and is not the King of the sprints, we’re going to cheat. However when the highway crossing, we note that is very stubborn and reached its top speed very easily, so that it reaches cut on pillandonos by surprise because there is no shortage before reaching this point (marker 140 km / h).

Four wheels better than two, in this case, it is clear

It is time to go curve, something little will do with its Quadro but is essential for us, we need to see how far it goes. And we knew, up to 45 degrees, more than enough if you do not pass the animal. In any case if you arrive at this point, the only problem is that, in principle, cannot close more is on the way and you can go long, but not solution. 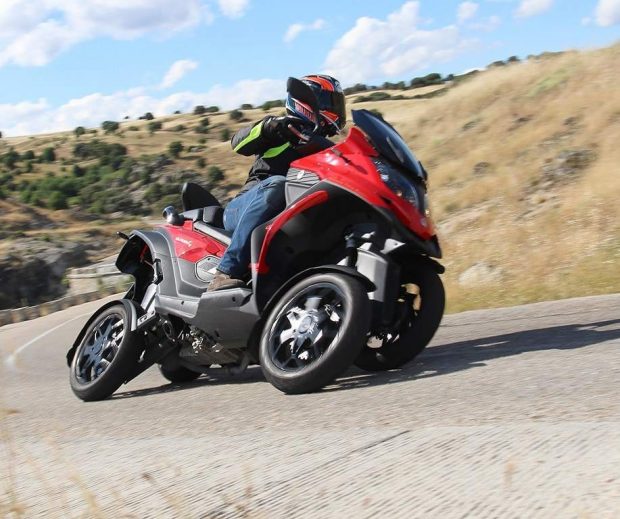 You have four wheels on the ground and a number of grip spectacular, all you have to do escerrar the handlebar and Quadro4 draw a closed path. Hallucinating. Of course, you could get to slide and it was fear, scare lower because many adhesion can find the way, you think that even lets you stop being the maximum inclination happens.

We felt so safe with the Quadro4 until what we leave the asphalt. We were skidding on the Mainland, something that even I went in my head talking about a scooter.

The Quadro has surprised and good, but needed a period of adaptation for breaking the limits you impose your own brain to enjoy what he is capable, we need to be able to change the chip and go beyond searching experiences unusual to date in the world of the scooter and even motorcycles. We’ll prove it thoroughly and see if we can overcome our own barriers. 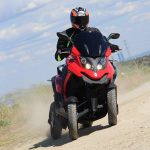 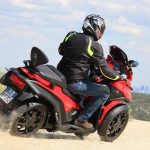 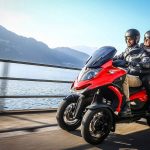 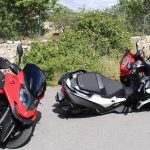 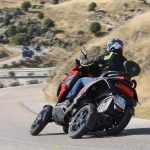 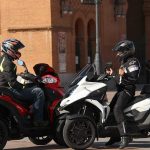 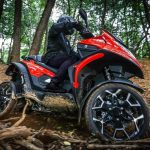 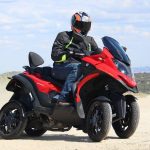 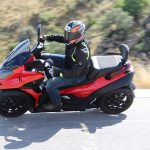 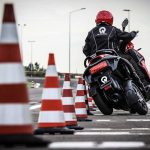 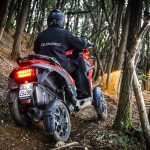 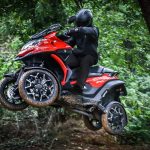