The Thruxton R is a revelation! On the technical basis of the Transfigured Bonneville, the English got sports beautiful… 97 c. The frame, engine: If we summarize the common technical issues between T120 Bonneville and Thruxton is definitely what you need to remember. However, to have an idea of what awaits you on the handle of the coffee runner new English, we have to dig deeper… Aesthetically, there is no comparison. Against the classic Bonneville that is near the model of what we know for some time in the 865, the Thruxton splash more personal, tense the retina of your enrapturing: 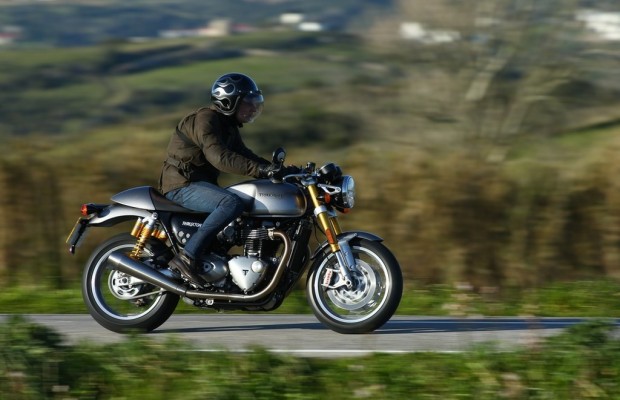 The chubby roadster tank, the elongated container and lateral notches refine its base participates significantly in the clear visual impression: under their retro Royal Air, because guess the almost magical one scam: this bike should be able to shoot fast, very fast… by €3,000 more than the new entry-level 1200 ‘classic’ English, unlike the provision obviously at Thruxton. Respectfully leave on conical setting, mono seat or bracelets of aluminum, and above all to retain the front end worthy of hypersportive, shock absorbers Ohlins, beautiful spoke aluminum wheels or even brushed and silent statements.

On the occasion of this presentation press conference, one of the engineers was revealed to me the essential differences between this engine and brother “camino”: a crankshaft lighter, high piston compression, special exhaust, a large air box, a shorter final drive and a third way “Sport”. Finally, do not blow the budget, but many when it comes to putting the handle…
For now, already it is seating on board. Ergonomics might have been feared in the “Ducati Sport Classic”, that is, almost unbearable in everyday life, and we find the opposite. Well above the T emerging bracelets do not carry too much weight on the wrists. The legs are more inclined to the Bonneville, however, the seat is firmer… Almost flat Board opens widely the edge doors of the horizon, the Sun reflecting their power without relying on chrome support top. The wide tab that covers the tank decoration is completed: forget what you know sports, here enters a universe of otherwise fixing, where each room is striving not particularly disturb the final objective: sport, no doubt, but with the style, please! 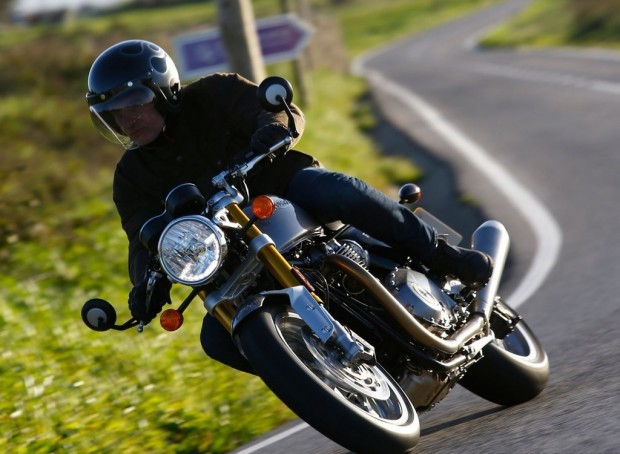 It is not too demanding research position ergonomically also heal limbs: the touch of the Brembo radial pump of the lever causes the Velvet of this time, the clutch is very flexible, as the Bonneville. The foot controls naturally beautiful aluminum. The rest to start… Yes, Yes, is it perhaps a little more dry, more virile? The box closes the first one with a little click, and good point of gender, Thruxton shines correctly to exit the car park. From the first meters, touch suspensions is felt on the floor: soft in the weak race, but closed quickly after… This is sport! On board, you end up having their brands, the Thruxton is quite compact between the feet, and even more between the legs delicately plated on the bottom of the tank. All this is very natural, there are no complaints. 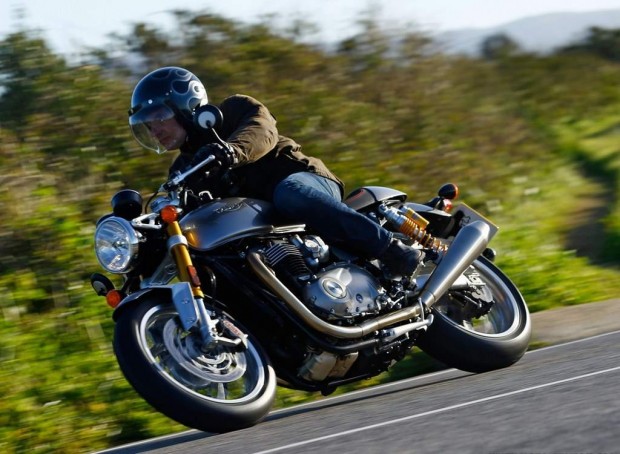 But before the half English opening decided that today is the atmosphere of tourism in Portugal… So I take the pain with patience and so little rhythm, the miles going back and forth without particular passion. Neck start to feel, the bust is not relieved with the wind pressure, mostly because nothing divert counters. Curiously, “Road”, the response from the accelerator mode seems less chaotic than the Bonneville at low speed, and completely smooth in the mode of “Rain”. In fact, I believe that the character has already described in the Bonneville Thruxton “Sport” and “Road”. Low speed always, the answer becomes sensitive to rotation handle, and probably a little less flexible engine. In the mode of a foot, without having to drag the “Sport” mode and below 2 000 r/min on 6th of surplus mechanics as well as pleasure. In such conditions, the Bonneville would be much more at ease, but fortunately the photos session approaches, and with them the ability to lead a small, finally.
At that moment, the Thruxton is definitely a “T120 bracelets”, but well and truly a very different bike! The motor? Benevolent “down”, but unrecognizable subsequently presented frankly giraras handle! From then on, rises as the plan significantly for the ears that the ass… Grows steadily at the same time, without hollow or out of control, but it does not last long… At 7 000 r/min all 97 horses have responded and it’s time to play box to reset the trip. Insisting a bit and leans backwards in the saddle, the front download to early reports, then speed forces appearing to push your knees and take the measure of the time… because the corners quickly, and there is here! 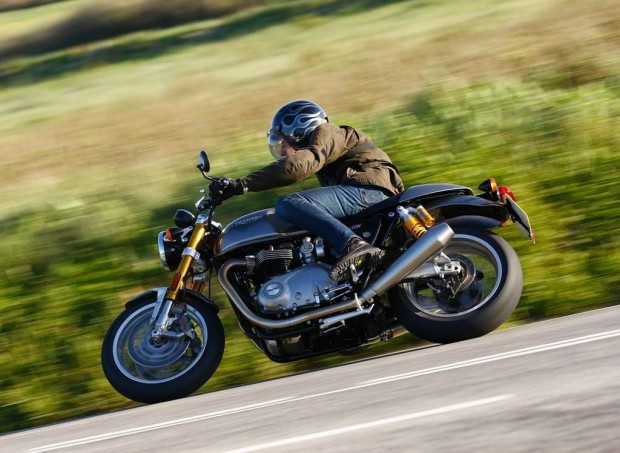 Driving forward position and modified management transfigured the behaviour of the structure found in the Bonneville… and, however, is the same! But here are the ties that right fork (22 8 ° instead of 25 ° 5, is not nothing!), 17-inch (18 in Bonneville) tire and the Diablo Rosso Corsa make the rest. It’s almost enough to aspire to the rope to put the bike in the corner with a more than pleasant efficiency. The bike is agile, strong, rigid with his two wheels. With a selection of tires less than the entire decided new reasonable size (120 AV – AR 160), the address, and the content by weight of around 200 kg of material dries (21 kg less than the Bonneville) is necessarily decisive. Behind its retro look, the Thruxton provides unexpected performance, but above all exploitable. Even during shock at the speed the management does not start shaking the bars despite the absence of shock. And nothing to spoil, “all radial” Brembo braking only shows an excellent touch, progressive, power, even the ergonomics of the part of lever in the celebration! 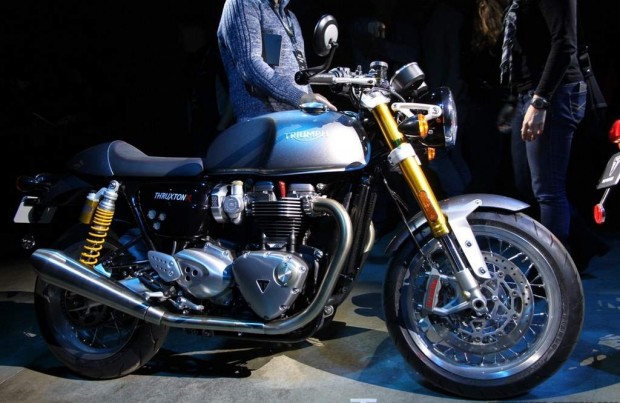 Test Conclusion: Another Large Almost Peaceful Motorcycle
The shoots are ending; the goings on and quick returns have helped to take the full measure of Thruxton. The return on the hotel confirms the relevance of the decisions taken by the engineers to get to this point to distinguish two personalities on the same technical basis. Against the almost peaceful Bonneville that is especially by its engine, the Thruxton R adds a frame and an imperial line. The general opinion on this “journey in Portuguese”, was the star of the day, so much so that one wonders how the market will move to the “normal” Thruxton for €12.900, including the incorporation of the suspensions and brakes under-performing significantly T120.
The price of Thruxton R strong, €14 900 to 03/09/16 finally seems logic away from Bonneville 11.900€, others less equipped. Thus, the coffee runner has great potential to convince reasonable athletes who give importance to driving fun and style of your motorcycle. In this sense, this R Thruxton is, without a doubt, the main competitor of any BMW NINET in the pilot version of cafeteria, over 1000 units were sold by 2015. Triumph intended to sell 3000 “classic” 2016 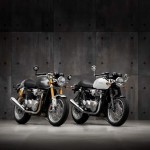 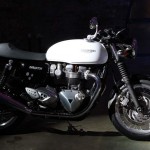 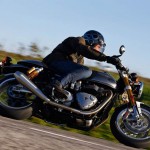 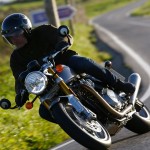 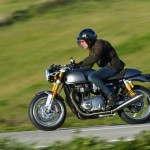 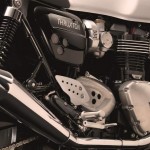 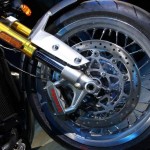 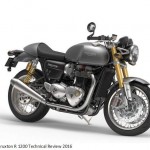 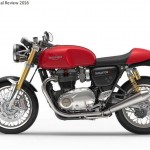 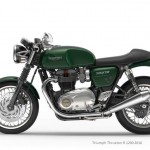 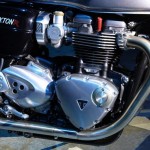 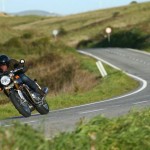