Ducati Hypermotard review after 3 years of loyal service in 2016. In the menu, a motor and the electronic nice evo… for greater efficiency? The standard versions and SP was tested on road and track. Verdict! 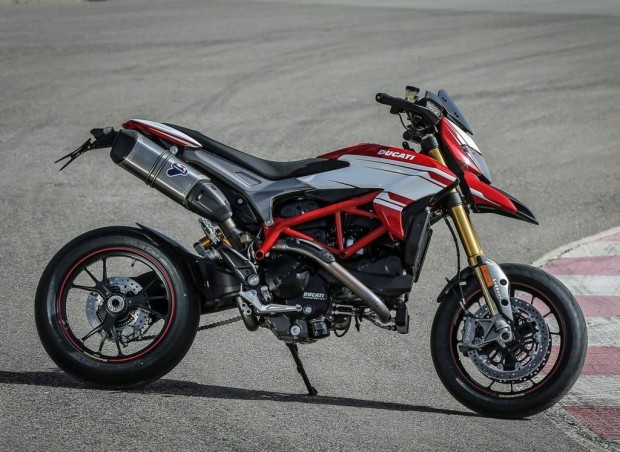 It is 11:15, near the Abbey of Montserrat, 60 km from Barcelona, where we make a small tourist stop after a few tens of kilometers in the saddle of the new Hypermotard 939. The first part of the book’s route was held under a climate rainy, with an asphalt wet to dry course offered little adherence: is not ideal to test the latest date of Ducati and that has just begun: at the time of exit, this time it’s a hail storm that hit us! It is a pity, I was previously dry, at least, that the terms dreamed to test the versatility of the 939, touted in the press release, hoping that an improvement in time will help me evaluate their potential on the day.

Earlier in the morning, is in the circuit of Castellolí manufacturer presents the Hypermotard family 939 2016, MS decline and the largest version of street, the Hyperstrada, who are not going to treat today. It was still beautiful and well finished, yet it has not been addressed in order to detail its latest. On the standard 939, until LEDs to the front turning lights still integrated into the bumper hands and the addition of a radiator oil into the front cylinder. Hypermotard SP side offers the Ohlins suspension and forged aluminum wheels Marchesini, in addition to the changes made to the standard version. 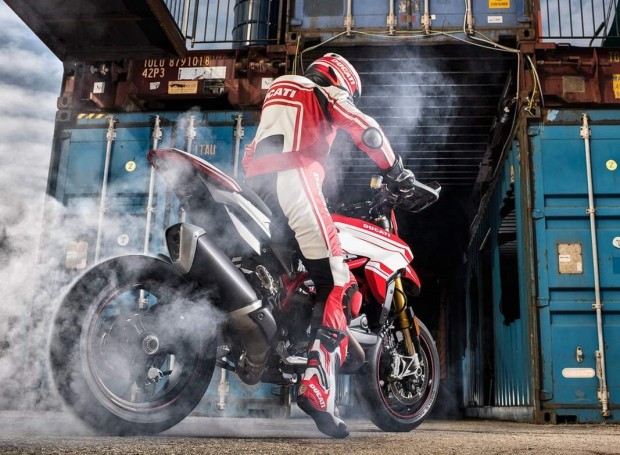 But the best thing is its interior, where the Italian engineers have modified a series of parts to optimize the mechanical of the Hypermotard approval, while it allows you to be approved euro4. The actual displacement jumped 821 to 937 cm3 not 939 as the name seems to suggest then we are promised a more complete torque curve in the middle of a nearly identical power range. OWL, is just enjoy the hands on the handlebar.

It is not a dwarf gifted

The thirty Ducati perfectly aligned in the paddock launches! Reaching a maximum of 870 mm from the floor, his mount requires a good segment of career to settle, in the short-legged continue without being at the party. Adjustment levers and mirrors whose effectiveness is quite normal, contacts, new, all-digital instrument panel now shows the dead point: good. For its part, the sound of the two cylinder v showing rather serious and current, without being too annoying, gas injections reveal certain inertia in decision to cheat. Euro4 was well… There remains to activate the driving mode “urban”, to start, and carefully Peel because of new tires, a room temperature and a wet floor. Welcome to Spain! 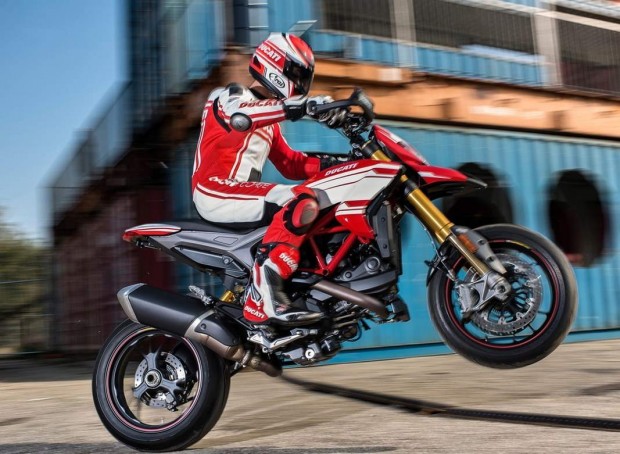 Bike has good Electronics Sys, but…

The grip is relatively easy and the first kilometers swallowed without much thought, despite the caution is in these difficult conditions. The Hypermotard is revealed all result agile, upright driving position allows good control of wide handlebars. For now, the two-cylinder v makes effort to cover all the flexibility, took without complaining of 3000 rev / min, in a significant way, “smoothed” through the assignment of the “urban”. Electronic limiter from its production to 75 HP of 113 shop and reduces the “logic” throttle response: the flag of punishment to take tours, but wakes up a bit later. Together with the “traction control” and ABS both set automatically to respond to intrusive, therefore we can turn of the throttle frankly ‘Ride-by-wire’ or pull hard on the right lever without fear to be sacrificed.

However, the entry into operation of the help seems quite brutal: DTC and violently short enough too late when you lose grip, while ABS is activated quickly in the event of a sudden decision of the front brake flexible,  long travel fork required and enough induced rebound on the lever. It is not very pleasant, although in real life, we will have in all case tend to lead more smoothly under these conditions and therefore suffer less from this phenomenon, except in an emergency.

Finally, asphalt begins to dry out, I’m in the mode “Touring” during driving, brake and accelerator-inactive to treat in a more dynamic way… AHA! Early on, the engine is colors along its 113 horsepower, rises are considerably more franco in the curve of output, more muzzled electronic audience… It’s time to break the edge of tires! 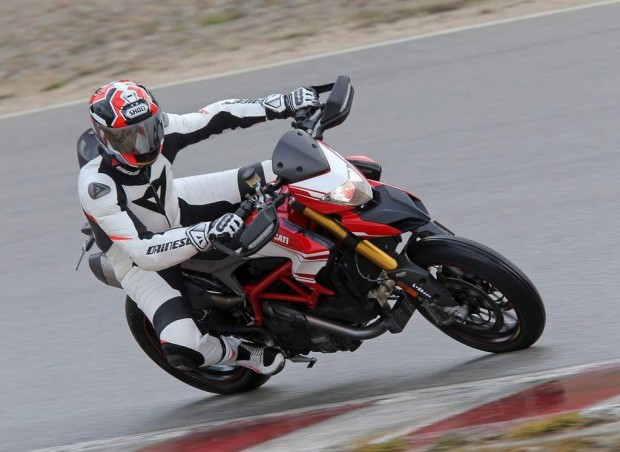 Pirelli / Ohlins, which is serious

Some grip Pirelli Diablo Rosso2 can enjoy the qualities of the Hypermotard 939, even in completely dry asphalt. This is particularly the case in the curve of output where, thanks to a rear suspension times dry but well cushioned, fine motor Ducati and was extracted with force. Non-perishable locks of gearbox with speed and precision, and even allows you to shift gears on the fly.

Part front side, the situation is somewhat different: the fork, soft in the first part of its course, and quickly falls under clamps Brembo monobloc brutal attack and the big race of the dead of the brake pump, which is to activate the ABS. So it is better to be sweet to the lever, so the transfer time of mass does before stop forever. And this “technique” is especially with the Sport map, with completely free engine and “send”, strong enough, the Ida and turn oscillating movements and vice versa are even more pronounced in acceleration and braking. So much for taking the time to get used to enjoy a lot of fun overall potential. 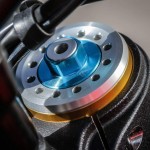 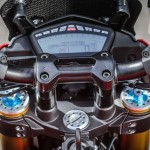 For the famous Italian double is sufficiently filled in the range medium to catapult his crew actually! In these circumstances, there will be little opportunity of search, finally, reach the towers, since it lies between 4,000 and 7,000 rev / min it shows more enjoyable driving and although the rhythm of our time of rolling for the timid our openers do not want to take risks, even in these precarious conditions, we had fun in the saddle of the Hypermotard 939, pushing slightly the front wheel is a mere formality. Sure, good dry weather or in the city, which should be very difficult to remain calm on board. 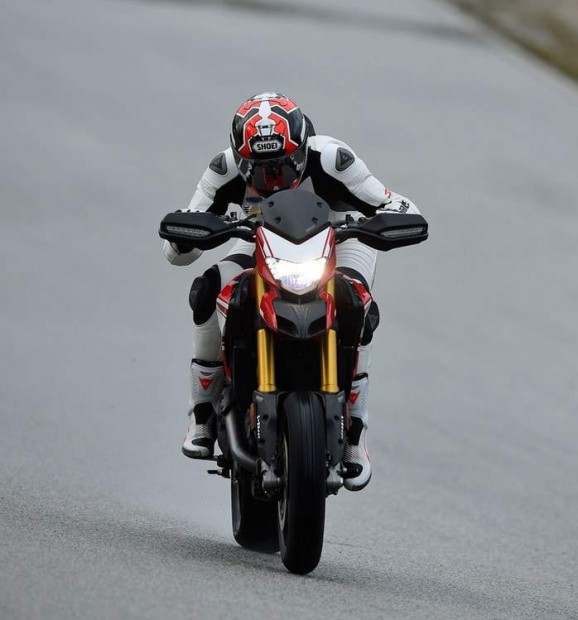 11:20, the Group focuses on the second part of the trip… Hail storm turns into rain after a few kilometers. Expected to finally push all the Hypermotard 939 up to the limit, but it will be for another time. Visibility is limited and a condition requires a flexible and soft ride. What calls our attention to the shocks of injection at steady speeds in an accelerator of light between 4000 and 5500 rev / min. Hiccup in bike and anyone who committed driving mode or the relationship. Information taken from the staff, the transition to the Euro 4, with the result that the erratic operation of the injection. And if we add a handful of throttle that does not have any negative reaction, we must show a lot of flexibility and progressivity to manage this inconvenience at best. But it’s time to go home and change of horse…

The afternoon is dedicated to the Hypermotard SP are pleased to try the mountainous route of Castellolí… also completely soaked circuit. Fortunately the staff makes the “wet” and adjusts the suspension accordingly.

At the Hypermotard SP 939, driving modes are different from the standard version “Race / sports / Wet” against “Sport / Touring / Urban”. The seat is also 20 mm higher than the standard 939, SP also receive a more quality-oriented, including a fork and fully-adjustable shock absorber sports equipment.

Once the Pirelli rain in temperature, begins to mistreat the Hypermotard SP. From the beginning, the famous Swedish touched drive suspensions arises the moult and returns the information to the pilot about what happens under the wheels. E even if the configuration is a little too soft for my taste, the quality of damping is impeccable, allowing “support” tires, as well as the acceleration of braking without activating the electronic AIDS: happiness! 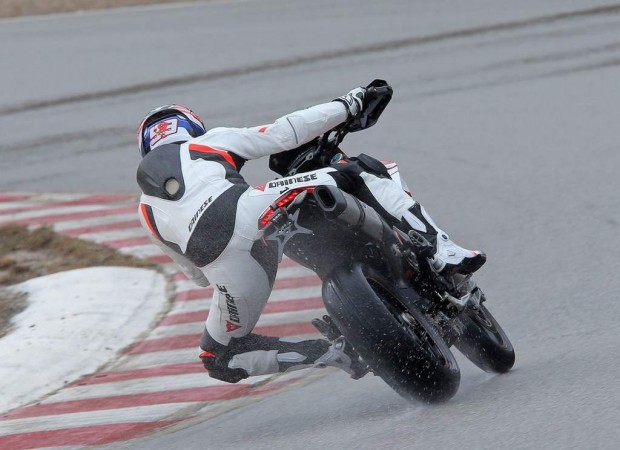 In brakes, Brembo calipers monobloc are still in the game, but this time powered by a radial pump that provides a better feeling on the lever for the precise dosage of the consecutive power available. Very soon adopt a fast pace despite some ripples, as well as some adjustments in the coating flexible inequality: it moves but it is holy. Marchesini rims, in turn, as beautiful as the light (- 500 g per wheel), are involved in the change of taste in bends.

side of the engine, the horses have gone through the catalog of options and equipped with Termignoni (not approved Euro4) full line machine 7 kg reduction and making a handful of horses and much more. The block is more alive and strong stops at high revs, a luxury in the use of sports! At the same time, the shocks of injection of the standard version of the Hypermotard 939 here feel seems to have disappeared. What more? 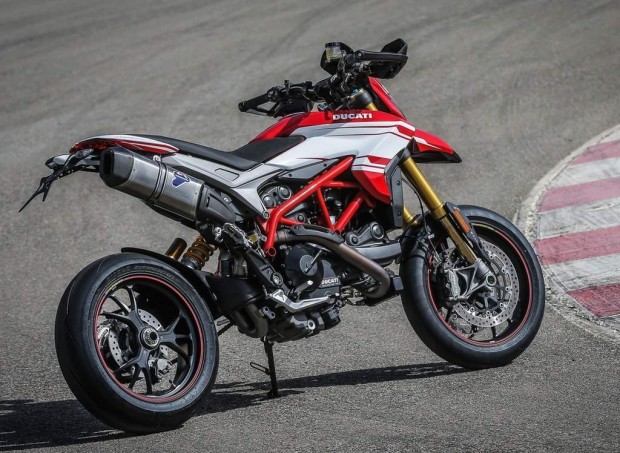 No revolution but an evolution is the ambition of the new Ducati Hypermotard 939. Manufacturer must adapt their model to the Euro4 standard and used the opportunity to improve certain point’s progress partner in the midrange with increasing displacement, indicating the Board committed ratio, although it seems that the electronic Assembly injection, ABS and DTC deserves to be improved. However, given the climate this first test conditions, actually have not been able to promote this new Hypermotard at a corner, what we will do in the coming months. At least the trial version of the SP circuit has allowed us to better judge their explosive potential with a team of top-flight and take much pleasure. Consideration is a price that also exploits: Ducati Hypermotard 939 is proposed for 11 €999 per €15 490 for the Hypermotard SP.

In the review also finding that it is not a bike for people of short stature.