After many adventures and tensions with Karel Abraham Senior owner of the Czech circuit, Grand Prix of Brno 2015 could be saved by Carmelo Ezpeleta and the local authorities the association created by the city of Brno and the region of South Moravia SPOLEK PRO GRAND PRIX ČR BRNO and company Dorna Sports on the other hand. Since that agreement has just been signed between the two parties concerning the Organization of the Grand Prix of Czech Republic at Brno for the next five years. 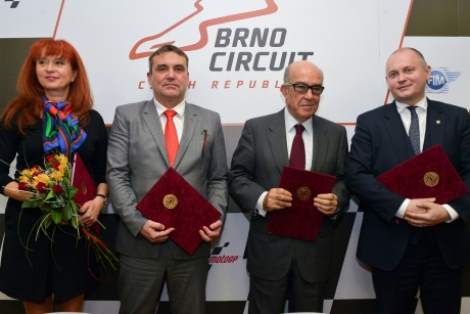 Now, it is more the case with a new five year contract between the Dorna and the GP of Czech Republic. Away from these big numbers, the spectators of this mythical Grand Prix, which serves as a venue to Eastern and Northern Europe, will be simply delighted.But the event was still uncertain for the future.

Carmelo Ezpeleta moved in person to initial the document which, in fact, brings a solution to a situation for the less complicated, certain debts of the Brno circuit having still not reconciled until today, a part of the aid promised by institutions having been temporarily blocked, possibly to put pressure on Mr Karel Abraham, owner of the circuit and the Grand Prix ex-organisateur.

In any case, all’s well that ends well, and with a fee estimated at around 4 million euros per year, but more than 200,000 paying spectators, the association should be able to balance its books without significantly increasing the price of tickets over last year between 1190 and 1590 crowns for the most beautiful places, either between 44 and 59 euros.In addition, it will pay a rent of 28 million kroner or one million euros at the autodrome in Brno.

Among the most beautiful traces of the calendar, the Grand Prix Brno is also one which home the highest attendance of spectators of the season. It would have been very damaging to no longer see the Czech MotoGP program circuit. Carmelo Ezpeleta is fortunately managed to avoid this pitfall by signing with the Mayor of Brno Petr Vokřal and the President of the South Moravian region, Michal Hašek a contract running until 2020.

According to CEO “The signing of this agreement is one of the most important documents for the Racing World Championship road. It is very important for our company, which organizes races, that the Brno Circuit is part of our programme for the coming years. This agreement resolves all issues that had arisen with respect to the Organization races in recent years”.