The Aprilia Tuono V4R lacked only ABS to enter the extremist clan of roadsters techno. For 2014, it is corrected, and Aprilia was profitable there to ameliorate the comfort of saddle, refine electronics among other details. Aprilia Tuono V4R ABS becomes even surer at the end of this year 2013 but that they claim it: his character remains whole!

When you take the controls of an Aprilia Tuono V4R, the sensations hurtled down like horses to the triple gallop! This motorbike is unquestionably one of the most sensational of the market, in all categories.

In 2011, based on the famous sports Aprilia RSV4, New sided with the launch of the roadster market big heart a street bike, a stripped authentic sport and equipped with a wide handlebar. In fact, the Aprilia Tuono V4R APRC has never done in lace … but in leather and sliders.

For this end of year 2013, Aprilia has made some changes to its sports roadster, among which a more comfortable saddle, the electronic audience is, an exhaust line reworked, three small additional horses in free version. 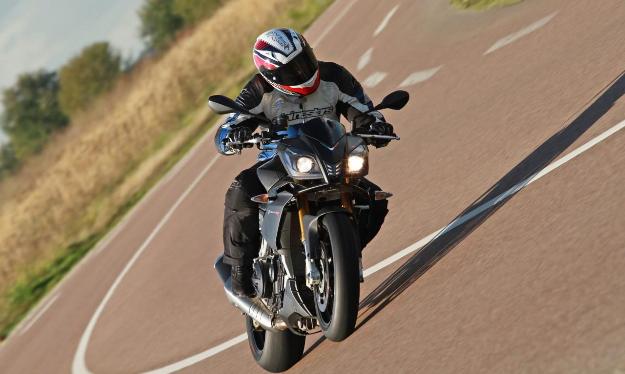 A concert of valves!

Not change so line-side: the Aprilia Tuono V4R ABS retains its look of stripped sports and its fork insecticide head. -Black or white – colors remain classic and finishing suitable, even if it means joining the street bike style, a little less refined than a classic roadster. Bah, Yes: a Moto Guzzi 1200 Sport engine, it still has a look.

At startup, it remains stunned face the avalanche of decibels, less sensitive in French version only in free version. The new Aprilia Tuono V4R rumble, growls, barks, varies from bass to treble: this is no longer a motor noise; this is a concert in major valves!

With a saddle perched 835 mm drivers than 1.75 m can barely put both feet flat. In terms of ergonomics, the Aprilia Tuono shows much more demanding than a Honda CB1000R or  KTM 1290 Super Duke R. The arrangement of foot controls, identical to those of the RSV4, requires more support to the wrists and more decline for the legs. 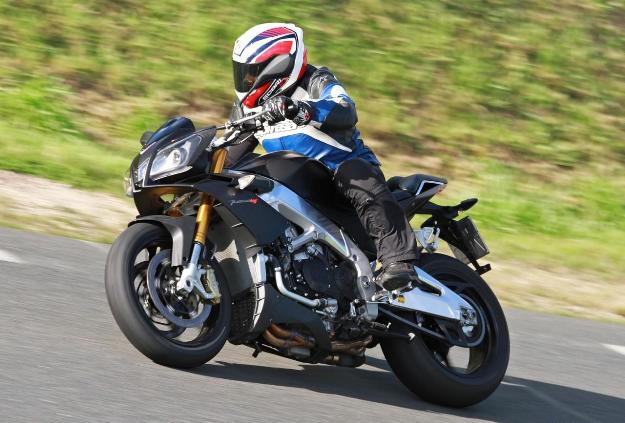 Not the urban roadsters

Question taken in hand, the Aprilia Tuono V4R ABS plays the paradox. It is light – 215.4 pound all full facts on our balance – but shines very badly. Above all, its sporty character is expressed without any deduction from the first meters.

This bike does not accelerate it jumps! The strength of the Aprilia Tuono V4R ABS engine powers – the word is very fit – Aprilia Tuono from low revs. And low speeds, it does not stay there long taped seen little opposed by the inertia block. Morality, in town, we understand very quickly that we do not handle this will open many damn right. Fortunately, the controls are fairly easy to identify, and strong enough clutch is a good feeling.

The shifter is supplied. Therefore, either we spend reports using the clutch, academic; either we go up on the fly, without cutting, but with enough opening the throttle, so speed. Suffice to say that this usage threatens strongly in your principal point in urban areas. You will therefore understand: Aprilia Tuono V4R ABS feels really cramped in the city. 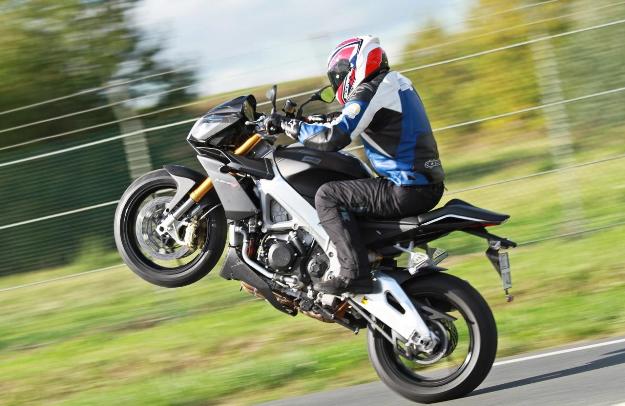 As soon as the horizon widens, the Aprilia found colors. You can then raise the pace and the Aprilia Tuono V4R ABS appreciates. The V4 65 ° prefers variations in diet to the cruising on the couple less than 3500 rpm. In passing, we note that the electronic throttle response generates not – or at least very few – kicker: the ride by wire is successful.

Between 3000 rpm and 4500 rpm, the V4 is booming and shows already vitamin, but if you open wide beyond 5000 rpm, the V4 pulls on the arms and the counter gets crazy! The acceleration is very, very strong between 5000 and 8000 RPM then, clamping forces, the engine makes little by little weapons. Moreover, even in mode Track (which presents the most vivid response), it steam gently after 8000 rpm while the standard version still releases a pack of horses.

However, in normal, or even sporting, use on road, it still well enough to make beautiful sensations. . Especially since the engine approval is rather convincing low vibration and a compromise torque / flexibility quite honorable. The gearbox is a bit closed, but the Tuono is a sportswoman who loves the whip, then we forgive him.

Side comfort, the new saddle is no miracle. The suspensions are a little dry on the degraded surfaces, but it is more the General rigidity that unfolds over the bumps or holes. The Aprilia Tuono V4R ABS barely absorb shocks with a very faithful transcript of the pavement in the handlebar for example.

Protection is also very limited series, what you point out in the Maxitest, but it probably helps limit the average speed. Needless to talk about the duo: 10 km in urban areas is sufficient to become aware of the point at which the rear seat is inhospitable. 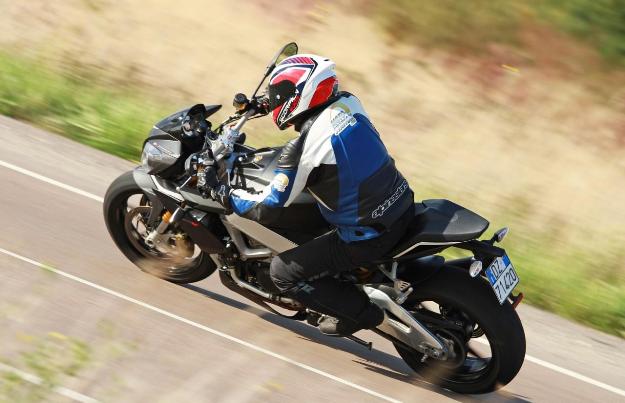 Novelty 2014, ABS plays its role without a problem on a daily basis, but it does not transform to the Aprilia Tuono V4R Motorcycle courier. In a utility role, this bike is tiring, but in a purely recreational perspective, it becomes intoxicating. Just a little in return on a well paved road to feel its potential.

There rigidity works wonders, the front moves a millimeter, triggering the shift reveals the precision of a genuine sports chassis, and Tuono can draw the purest trajectories. It happen fast, brake hard and late – even if the feeling could be improved through a better master cylinder – and emerges as a missile through the fabulous V4. The shifting shifter is addictive to the grandiose atmosphere control.

Sometimes, the audience alert lights begin to Flash, denouncing the entry into operation of the Aprilia Traction Control which always ensures the adherence of the rear tire. Just play with the pallets to the left stalk to adapt its action. Reaction to rotation is reflected so everything naturally and the front wheel is more or less fickle. Similarly, the level of ABS (1-3) impact differently on this one, then allow a take-off of the wheel rear setting. Electronics is ubiquitous on the Aprilia Tuono V4R ABS and you must learn to know to enjoy the bike to its fair value.

It is often said that modern bikes become much sanitized, they are all alike. The Aprilia Tuono V4R APRC ABS exception to this rule, ultra powerful motor and chassis, it brings a lot of driving sensations. Or wearing normal everyday use, it becomes fantastic sports use on the road or track. What could be more normal when you consider the base?

In fact, the pleasure taken in his handlebar will depend on much of your knowledge do and borrowed course. It is often the case of very typed and/or sporty motorcycles. Finally equipped with ABS, the Aprilia Tuono V4R APRC ABS seems arrival at technical maturity. Sold €13,999, it displays a price / performance / finally honest technology. Its competitors – including those that will arrive in 2014 – should not even offer better performance. 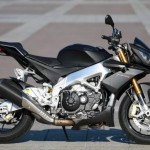 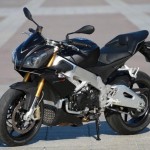 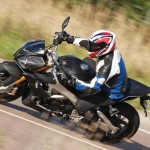 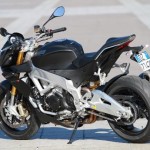 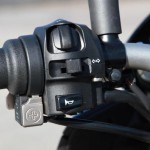 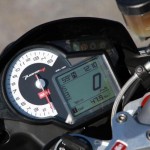 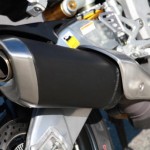 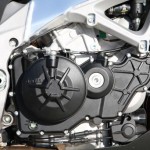