The Yamaha XSR 700 is not here yet she is already entitled to several photomontages! Here is Italian home Kentauros who imagined a Scrambler declination. Kentauros is a rather skillful graphic designer. He often crunches many bikes, but it displays a penchant for classic motorcycles. Good thing it’s fashionable. He has just published his latest production, a Scrambler version of the Yamaha 700 XSR, which should arrive by the end of the year. Rather well done, because not too fanciful, this photomontage illustrates perfectly the potential to transform the future XSR. Removable rear buckle, easy to remove side panels or decorate, future neo retro Yamaha should see all the colors among preparers. 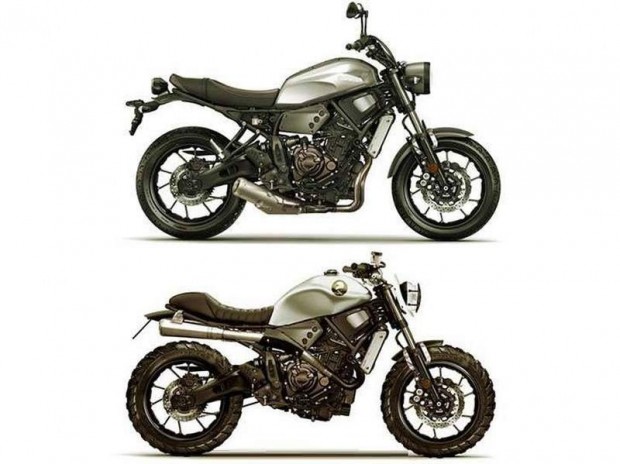 A vintage style but modern technology for this Yamaha XSR700:

The retro-inspired motorcycles won a growing success. Two trends have seen the day. That consisting in reviving the glory of the past, such as the Honda CB 1100, the Triumph Bonneville or Yamaha SR 400. And the more innovative, based on the marriage of a retro style with modern technology, a successful challenge by BMW with the Nine-T, or Ducati and Scrambler.
Yamaha launches in turn in the neo-retro with XSR700 that has its stylistic roots in the XS 650 of 1968, while taking over the mechanical basis of modern MT-07, launched last year. Another feature, the average engine will be assembled in France. This XSR700 is distinguished by components worthy of an English Machine fifties. We mean an aluminum tank 14 liters, a leather saddle and a terribly round headlight.