The Monster undoubtedly the great initiator of the roadster genre. Devoid of fairing and focused on performance, the Italian roadster embodies for over twenty years, the motorcycle in the rough. On the Audi stand at the Frankfurt Motor Show, Ducati presents a new interpretation with a very powerful 1200 R, posting a whopping 160 hp. 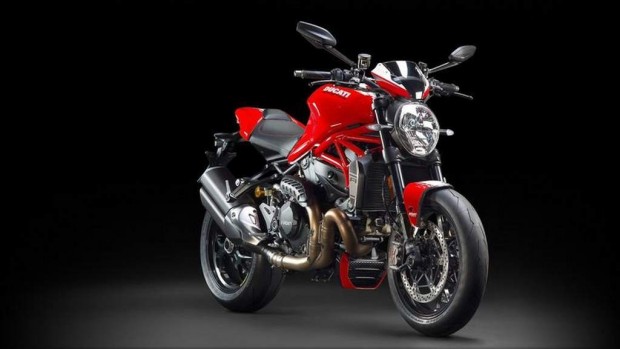 If the French rider was not, in principle, not affected by the race for power that motorcycle manufacturers engaged, the entry into force on 1 January, the Euro 4 standard will change the situation. The bikes that anticipate the new regulations, to reduce pollutant emissions and noise, can now be imported and shipped to France without power limitation.

The Ducati Multistrada was the first to step into the breach in July, and the Monster 1200 R not follow suit in early 2016. This development R has all of a firm’s burst of pride Bolognese deal with muscular attacks KTM rival. Indeed, the Austrian brand launched two years ago a stunning roadster R 1290 developing 180 hp, and it has called “the beast.” You said provocation?

The response Ducati today takes the form of an evil Monster 1200 R, which will also be responsible to overshadow a 1098 Streetfighter never found its audience. The new monster was unveiled on the eve of the opening of the Frankfurt Motor Show, at the “Volkswagen Night.” Since 2012, the brand has entered the fold of Audi, which earned him a place in the lobby of the powerful Volkswagen group.

The Monster 1200 R remains very close to the 1200 standard and S launched last year. A trained eye will notice however, a refined rear mounting a rear seat, a garbe carbon front mudguard, a small jump of wind, a new radiator protection, footrest mounted separate media and a different exhaust system.

The silencers are bigger and located higher because Ducati has increased ground clearance of 15 mm to the attention of its customers desiring to take the monster align laps. There is talk of a possible lean angle of 50 °. The fully adjustable Ohlins suspensions and signed Brembo brakes are calibrated to the test, as well as the Pirelli Diablo Supercorsa SP tires, 200/55 at the rear.

Ducati Announces lean angle up to 50 °

The gain of 15 hp and 25 hp compared to the other versions of the Monster 1200, portends beautiful sensations. Especially since, at the same time, the assembly of forged aluminum wheels identical to those of the Panigale hypersportive helped win 2 kg 180 kg dry, 207 kg with full tanks. Only reserve, the small size drivers will face a range of seat height 785/810 mm to 830 mm.

Ducati announces no less than nine new products coming in 2016, including the Monster 1200 R which will be available early in the year, in red and black. No tariff has been put forward, but that of the 1200 S starting at € 16,250, the threshold of € 18,000 could be reached and perhaps exceeded.