You all know HM Honda, Italian broker of Cross and Enduro the first world manufacturer of motorcycles. Mean while gone since it is now Red moto that is responsible for enduriser the Honda. Today it is the Red moto Honda CRF450R 2014 first name passing into the hands of bikesdoctor.com. The change in perspective, Yes and no… 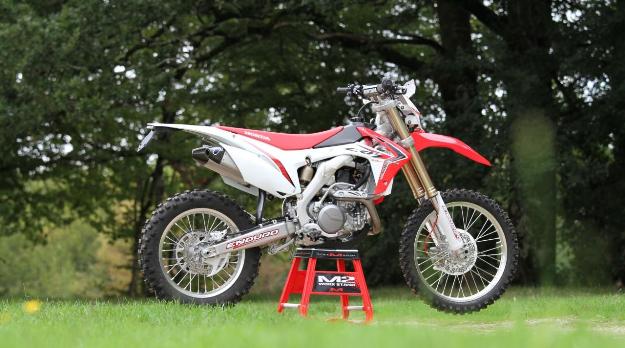 After many years of good and loyal service, HM passes the relay on a Red moto with regard to the approval of the Honda CRF450R and CRF – X. This will not change anything with regard to distribution in our territory: Euroboost remained in command.

No great change technically, Red moto being dependent on the developments in the Honda range. And as 2014 is a year rather quiet for a deeply revised Honda CRF450 last year… 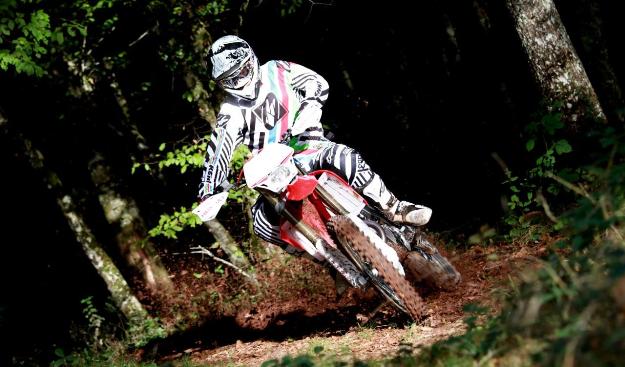 At first glance, our opinions differ already on the look of the bike. Bastian is rather a supporter of the sobriety of the whole while I’m a little disappointed. HM was used to highlight the Honda racing parts with little touches and white plastics with a deco kit … Which, in my view, is sorely lacking a genuine Honda.

With Red moto, it is more content and the difference with the Honda at Cross is also more marked than before. No disc oversize – but the blade guard is retained – or saddle cover: it will take to settle carbon sleeves added to the original exhaust line. However we appreciate the presence two indispensable Enduro: the hand-guards and the motor shoe.

Track for testing Honda crf450r Red Moto! Here, no electric starter, but started at Kick is fairly easy for a bike of this capacity. We will see later that the good start of the Red allows him not to stay in the woods… 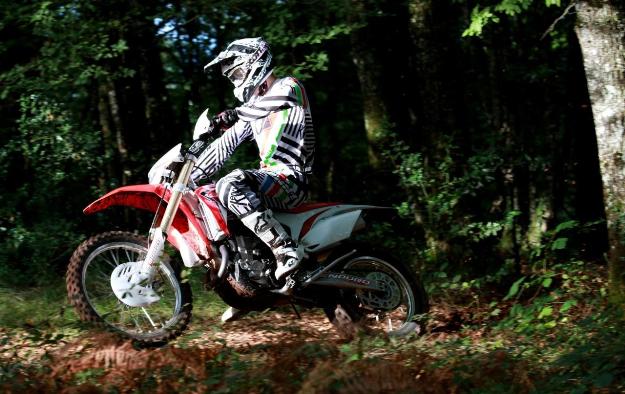 Ergonomic and healthy, but not comfort

The grip is instant, with commands perfectly in their place, and a feeling with the intuitive chassis… Breton preserves one of the big strengths of the Honda. There are then two weights, two measures for this Red moto Honda crf450r.

At first the behavior of the whole seems completely adapted to the first special test rather rolling drawn in the middle of a field with a few jumps, speed, heavy braking.

The Red moto Honda CRF450R is in its element and takes angle in support is a pleasure. One pilot calmly without apprehension, suspensions are relying on this special at very good grip the day of our test.

In sinking a bit more underbrush things get complicated. Suspensions lack of comfort at the beginning of compression for Enduro use: they deserve to work more easily in order to erase the small bumps at best.

Play settings would have already allowed him to escape with ease between the trees, but when even closed, the history. Moreover, if the front brake is enough hiking, it remains indented when it is really necessary to seek it in special.

Turn to the Honda mill, which gained character in 2014. This will delight lovers of big gas and good drivers, but fans will have a little more difficult to take in hand.

Without being a monstrous arm puller, the mono 450 is an explosive hair all the way down. Still, it feels not necessarily on the special. On the other hand, in the Woods at low speed… A bit more flexibility would wrap much easier instead of having stay ready to jump on the clutch.

Because you are told that the Red starts well, it you will be able to test kicks a number of times during this grip! During our test the Honda CRF450R 2014, we had put forward an unpredictable piston blow: it’s still there… and even more unpleasant mode Enduro.

Euroboost put at our disposal other Honda CRF450R, equipped with a Rekluse auto clutch. We quickly recalled the principle of the thing: it always passes speeds using the clutch lever, but once on the good report, no need to touch the lever.

Rekluse System – somehow a dimmer – deals to find the point of optimum skating in all circumstances. A time of adaptation is necessary, but once the operation is integrated, it is really ideal. It realizes especially Enduro: a little steep, it engages the second and it no longer affects anything, a net gas will suffice to overcome the difficulty.

Suddenly, the engine behavior becomes much more round, and especially easier! Bastian discovered this system: destabilized at the beginning, he quickly took the crease and has witnessed monstrous of the Rekluse efficiency when it is necessary to find traction.

The advantage is also that we hold much less often. In fact, in theory ever, but when they asked too much to the engine, you do it anyway. A rise in 4th for example… The other side of the coin is that once seated, no need to push the bike to start taking: the kick is required! 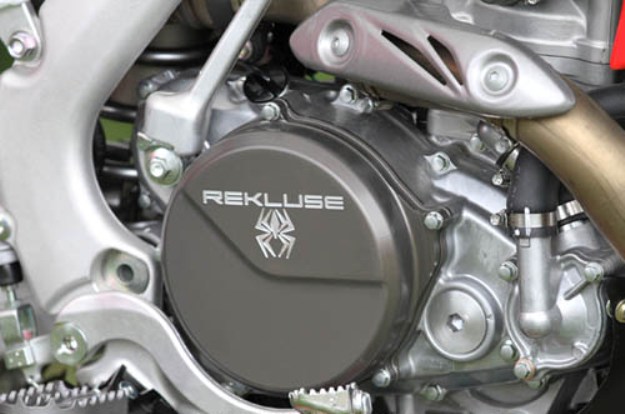 In the end, Red moto Honda CRF450R is distinguished by ergonomics and a feeling at the top regardless of use. Feel in tune with the bike, it is essential in the taking of pleasure. Balanced, healthy, manageable, the frame scores points, but for pure and hard Enduro use, suspensions are really lacking flexibility.

This also applies to the more rounded engine at low revs would make the grip even easier and iron out the damn piston stroke. All these remarks concern the bike in its standard configuration without touching any adjustments. Because, as we have seen with the Honda CRF450, there is an opportunity to be a motorcycle card playing on the air pressure of the fork or the injection mapping.

The advantage of the Red bike Honda CRF450R, the spirit derives much more on the sports side as hiker is that one can perfectly play on tables Cross and Enduro for one weekend on the other. € 9 299 Licensed fare, this is an option ‘two in one’ which may be a solution for the Enduro eager to tax the crossmen on their land… or vice versa! 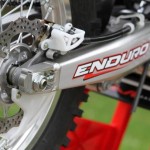 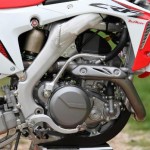 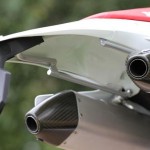 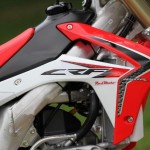 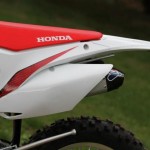 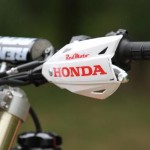 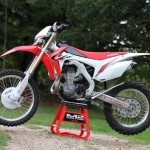