Last BMW Motorsport tested, the S1000RR launched in British Super Bike is undoubtedly the most impressive of all. Even frightening! Febrile reported Davidm4, still trembling… On paper, it was not the best performing BMW Motorsport S1000RR proposed, as placed before the Penz13 Endurance. The motorcycles are classified in order of increasing performance, the British Super Bike specs should be the gantlet kind, if indeed you could say that a motorcycle 220CV…
However it is she who has marked me most during this day tests because its technical features make it a true monster, a walking nightmare … that we will not come down.. Fasten your seat belts and your underpants, here Externally, the BSB # 46 is very similar to # 8 IOMTT, even for decoration. And more: the two bikes are technically almost identical. Once in the saddle, however, the differences are obvious … and buttocks.
Indeed, the original dashboard gives way to a beautiful MoTeC LCD. The tee and stalk their side are identical to those of the motorcycle Guy Martin. The wicked master cylinder Brembo is also present … At the base, however, nothing to do. The saddle, wide crotch, requires only one position: unable to step back because the backsplash blocks. In fact, I feel cramped and not very comfortable, because too close handlebars. Bizarre, especially as the official driver of the BSB much is 5 to7 cm taller than me … Stuck on the tank, I noticed a sticker with three words written by hand: No Traction Control. Sorry ? I think there is a mistake Mr. mechanic, it’s a joke for journalists is not it? No no, this is not a joke … The BSB Regulation prohibits the use of traction control devices (traction control, launch control) and anti-wheelie. So there, just below 220 nags are completely free?
And the rear tire completely dead, it’ll be a problem right? “Yes, he is dead, you are the last before the tire change, go there slowly” slip me the English as a mechanic last sentence with good pat on the back … Gulp!

It is in these ideal conditions that I was the pit lane to the entrance of the circuit to make my three laps on a unpinned grenade, asking me how it will happen. First corner, I take off. The second, I lean a little to the left … and the bike falls once: Pirelli slick is so steep that it imposes a notch in setting the angle and waddles destroyed happily on her gum. Courage, only two towers and twelve turns …
The further I go the more I get used to the behavior of the English S1000RR in curves left, but I am content to roll to avoid literally fly away! Forgetting the tire, the bike is precise and the angle change is a formality. Only the peculiar position bother me during the pilot phases.
Right side, however, the Italian envelope is in good condition and I allow myself passing speed “normal” with some degree angle. The affected bitumen so sure of K-Tech suspension works wonders even if their settings seem firmer than on the machine Tourist Trophy. Billiards coating circuits is less demanding than road bitumen road races.
Level braking, hyena bite and absurd power are waiting for you: the BSB sinks into the bitumen and remains online. Yet perfect. Last left turn before the straight. I gently take, recovering well the bike online and accelerates gradually but firmly: the # 46 rears forcefully in two. I relieves, spends three and re-gas: it rears up again. I ride a report and gas: it rears up again! OK so I still an upshift and again … and the bike always rises …
But it never stops this thing or what? Fifth, it is quiet some and I can tighten … except that the straight line is completed.

Damned, I retenterai the next round. Meanwhile, we have to manage this stick of dynamite …
In order not to end my existence, my focus up and put all my senses tuned the rear axle to prevent any evasion. Fortunately S1000RR trying to make my life easier because without electronic hindrance between us, I have a direct connection to the drive wheel and an exceptional feeling. No dead time between the rotation of the right handle and the reaction of the tire: I dosed my action very specifically, freeing the horses one by one!
On the left, I tried anything and seriously Module sending power. On the right, however, the feeling of an ultra fine management to be effective while trying to keep both wheels on the same line is quite enjoyable. No safe crutch, just the pilot’s experience and sensations to advance at a pace other than that of a turtle: extremely gratifying, what a pleasure to take the BSB! Straight and strong again my great experience of a ride on the # 46, inflames me and I thoroughly screwed in second, while pushing up the handlebars to load the front wheel. And then I take a violent kick in the behind for the front wheel off the ground at once! Third report, I still grows stronger and this time the wheel is close to the ground.
I keep the accelerator almost fully modulating surgically arrival in power thanks to the feeling of the handle … The sensations are extraordinary, and I feel like sitting on a fighting bull doped amphetamine whose sole purpose is to unseat me!
The continuous rodeo and power never stops arriving, always ultra brutal and without filter once a handle in the corner. Adrenaline in its purest engine, above the WSBK and Tourist Trophy! This bike is absurd, delirious, it’s anything, it should be illegal … I can keep it?
During the last lap, the pace is faster during the combos but the tension is always at its maximum both in the head and in the muscles. The fiery temperament of this S1000RR shows how without electronic, it would be really difficult to ride today on the road with a modern supersport.

Conclusion: For the chosen few only

Real bomb on two wheels, the BMW S1000RR to BSB specifications do not clearly address to anyone, even with solid experience and track. As much on other bikes concocted by the Motorsport department can rely on the traction control to avoid the worst, as the # 46, the right to make mistakes does not exist. However the steering finesse and sensations that delivers S1000RR are from another world who knows how to listen to and manage. 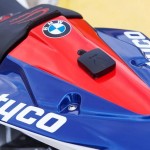 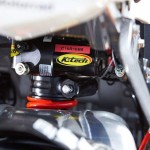