When we see Holographic Hammer work on a scrambler model based on a Kawasaki Ninja ZX-10R we are always a bit excited. With the right suspension and traction control in his right hand, there is no reason that a ZX-10R cannot be the basis for a dual-sport fun. And, of course, the talents of Holographic Hammer made the project even more surprising. 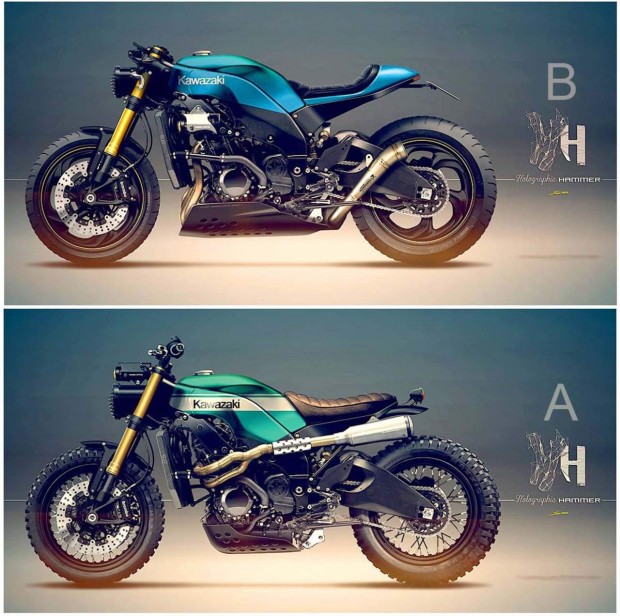 This build was made for Indonesians Motor Sport Baru. In the photos you can see the two versions of the two wheels made from Holographic Hammer. BMS has opted for option A, the off-road and the final version is the bike characterized by solid green. Remember, for those who had forgotten that the Kawasaki would have a brand new ZX-10R. The rumor came a few weeks ago from Speedweek who interviewed Guim Roda, the Team Manager of SBK Japanese brand. Talking to Speedwekk, Roda said that we will soon see a new Kawasaki ZX-10R, most likely in 2016. The concept will be the same, but with few details and new changes “we will be even more competitive.” said the team manager.
Already at the origin of the very successful Scrambler hero based on Ducati Scrambler, Holographic Hammer has this time attacked in a preparation of the Kawasaki ZX – 10R 2008 to convert, there also, in Scrambler. A more daring bet… and once again succeeded! 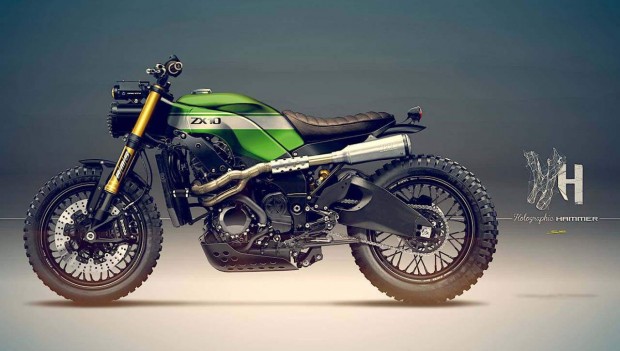 The Scrambler is fashionable, it is a fact. But nobody had yet dared to go to a sports car to a neo-retro. Turn a superbike in an off-road model may seem heresy to most bikers. However, the creativity of art should never be censored. It was with this philosophy that the French Studio Holographic Hammer brothers,No one except the french bosses Sylvain and Florent Bennett of Holographic Hammer. Obviously, everything has changed except for the engine and the impressive swingarm of the ZX – 10R original framework. If you are interested in the purchase of the beast, here is a contact address.
There’s no accounting for taste, but with the success of these models worldwide there is no denying the talent of Berneron, isn’t it?!