The GTR was born in 1987 in 1000 m3, it took 20 years to a parade with the GTR-1400 market had to wait. So suffice it to say that it is not willing to change this way of open principle. She returned to the engine and frame of the ZZR 1400, the famous rocket two wheeled aluminum housing. Since the traction control, arrived in 2013, and some details, as the windshield and the saddle have been changed this year. So is so perfect that it does not need to develop? Not so sure … 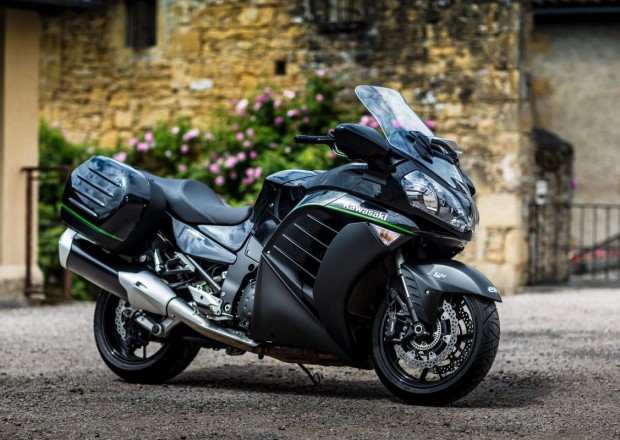 The first contact impresses more like the GTR 1400 with his side panniers and the enveloping fairing is imposing. Aesthetics is trivial, and in her black dress draws nothing really. Caching t – there his game? Or does lack is charisma?
On handlebar moves, must we go over the saddle now a little less high, but again, you’ll be immediately invaded by a feeling of wellbeing. Orders fall to correct height thanks to the handle down and improved. The location is perfect and it dominates his subject. It is necessary because this Kawa weighs a little at the stop and maneuver are not easy.
Kawasaki 1400 GTR – small memory that locks the contactor Kawasaki 1400 GTR – all audiences on the handlebars are scalable. Kawasaki 1400 GTR – it houses a complete or modular in each case Kawasaki 1400 GTR – impressive, but easier than it seems, rolls

The instrumentation at the bottom of the adjustable windscreen is electrically installed outdated and breathes the classic. There are lots of information, but must, sit forward and let the Eye Street reach the slider on the dashboard and change the display of the latter. Not practical and dangerous, but kava has not opted for a functional control on the handlebar. Between the speedometer and analog tachometer, it is entitled to a digital window segments Meters motor and gasoline, the traveling, the clock, the ratio of the speeds and then to the selection, immediate consumption, average or autonomy, the battery voltage, the outside temperature but also the display of the pressure in the tire. This system enables to detect and prevent a puncture, which adds an additional security feature. Equity and other instrumentation, the integrated GTR take 12V, the. From the glove compartment and the independent adjustment of the two lighthouses 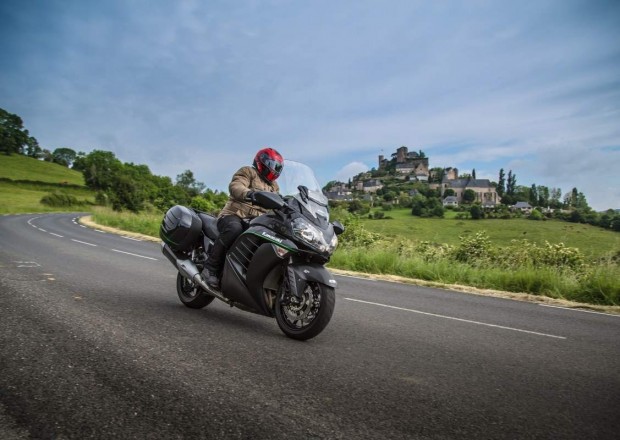 The handlebar offers the GTR a trophy-contact, the warning command of the windshield and K – Act and K – TRC deactivations. The clutch-brake levers are also adjustable. There is also a small enclosed electrically left cockpit. The windshield was a bulge, the dynamic effect of the airflow moving over the head.
At the level of the key switch in a large central switch, which is not the equipment, leave open with the exception of tanks or luggage is integrated. To unlock, press the direction, but this the magnetic card and will have within one meter of the motorcycle. The Kypass system now seems a little dated, as he is innovative, but here already 7 years in the edition of GTR … Today, it has just less complicated to use a magnetic card with slippers on remote control. Also require the plague on suitcases that are already open the key. Not cool.
Kawasaki 1400 GTR – good capacity Kawasaki GTR 1400 – inverted fork supplementing the train of Kawasaki 1400 GTR – levers are adjustable. Kawasaki 1400 GTR – warning and right hand contact to cut. 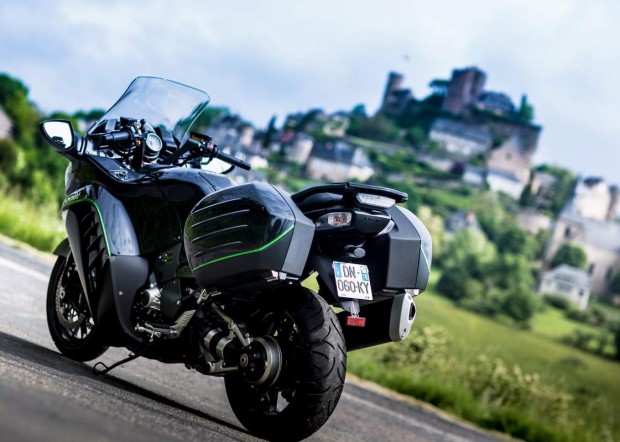 As early as 1987 had the GTR 1000 has a powerful 4-cylinder engine, which placed her as the sportier GT Kawasaki has not changed today, positioning and took place on the GTR the most powerful engine the Kawa area with one of the ZZR 1400 the 172 hp shown in its free version. Kawasaki checked this block with a camshaft adjustment for the authorization, which allows greater flexibility of the engine at low speed. In addition, the camshaft displayed a “Quiet” profile to the variation in the time of distribution to achieve, Kawasaki used hydraulic controller, the treated injected into the double pinion shaft occurs, the volume of the oil.

Thanks to the variable distribution – a first time diagram of the camshaft for the intake depends on the plan and the position of the throttle. Injection has also been revised to conform to the first report in the field linking. The result is high, low and plans torque and a dazzling performance at high speeds. The GTR is a maximum regime the increases at 10500 u / min, but can not grudgingly nice to 3000, develop. It is therefore a good adaptation to all modes of transport behavior. Use, but you have more than 5000 U / min, will receive a significant boost. 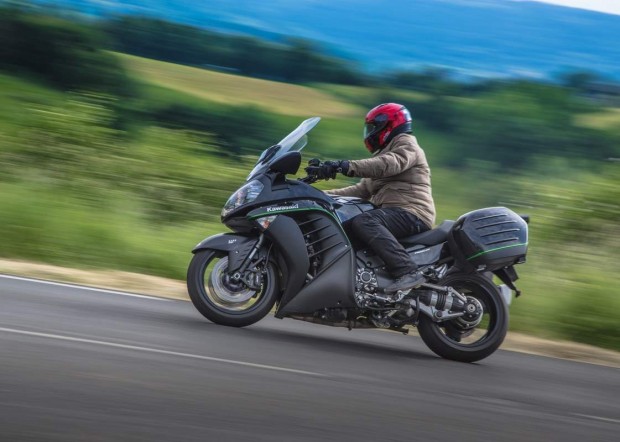 The 1400 GTR adopted the original scope of the ZZR aluminum hull. In order to support the extra weight, the steering column, higher amount and swingarm have been strengthened. This technology, developed by Kawasaki, the individual, in order to limit the weight while adopting remains significant restriction. GTR 1400 shows 278 kg dry on the scale. The fuel tank is in the middle of the chassis, as well as the battery and ABS, in the center, so that the excellent positioning of the mass unit integrated.
In fact, and it is surprising from the first few meters, the neutrality of this wheel is striking with this ideal weight distribution. Weight to be seen a little too much at the stop disappears as if by magic and processability is remarkably even if the turning radius remains modest. The first shorter reporting easier starts in free. No GT is easy in the city, although the retro the GTR limited the lifts of files.

Stability is to go on the highway and is not a surprise, because we meet at 140 km / h with 4000 U / min in overdrive m in the greatest comfort. The box is equipped, in fact, with a sixth report save long the engine and reduce consumption, which revolves around 6.7 l / 100 km, and it goes down a liter of this use. 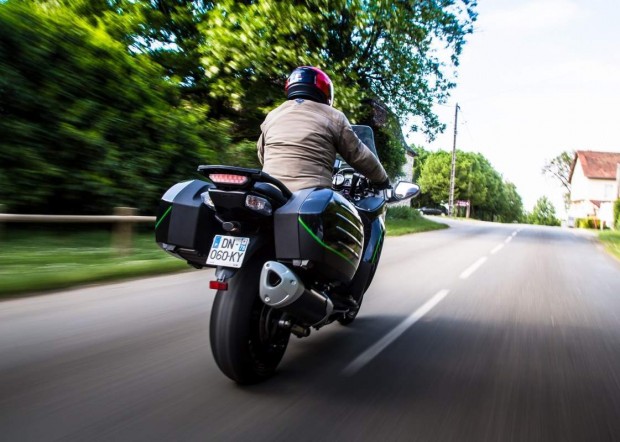 But on small roads that turned the GTR and surprises by its liveliness. Accurate and easy to place on a train, taking the angle at will and agrees to review its trajectory without any hassle. At the front is a real train of sport with reverse caliber 43 mm, adjustable fork preload spring and hydraulic relaxation, but there. Already very correct answers to basic settings On the back of the shock absorber adjustable bias of the spring, thanks to an external knob.

Adding a brake exception of a sports car with his 4-piston calipers Radial Mount pinching two 320 mm discs … Heck, it lacks a bit of bite. We appreciate the coupled brake K – action that has front / rear, depending also developed a progressive distribution of the velocity.
One is in the sweet and you almost forget that the Kawasaki GTR shafting has. Small football, when starting or changing the reports. Engineers have also tried to destroy the effect of the acceleration characteristic uplift. Therefore, there is a system similar to used by BMW and named here the Tetra Lever. Use, we forget behave similarly entirely on the presence of Acatene transmission with a motorcycle chain final drive. 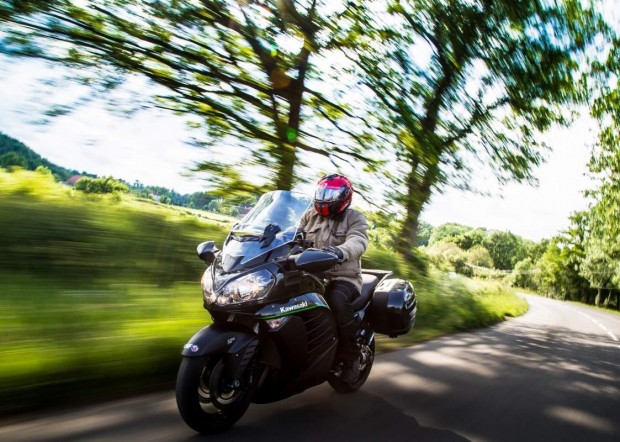 The GTR offers good transport capacity with its door luggage its removable side pockets helmets by the passage of 35-37 liters and a small memory locked in disguise and his laptop to make his credit card and his ticket for the toll. The cases are easy to remove, but with mandatory service key or the switch. Ditto for their opening. Boring!
The protection is very correct with this new windshield and the passenger is not too high installed. We also appreciate the deflector windscreen, which increases the comfort of driving on the highway, draw reducing depression inside, but also directs the airflow through the helmet. Use, the saddle is a hard layer. The GTR carries his world for long distances at speed. 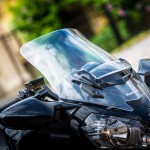 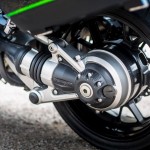 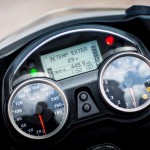 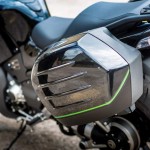 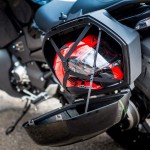 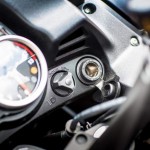 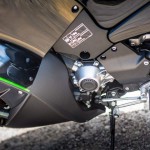 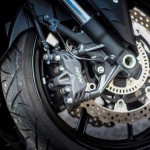 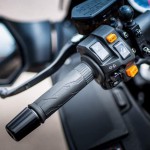 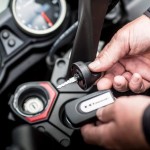 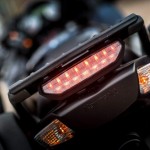 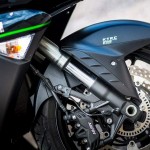 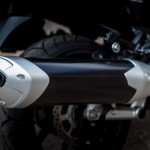 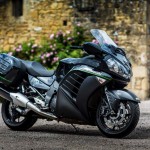